Luxury champagne brand Dom Pérignon has recently launched the latest of their exclusive limited edition line of champagnes produced in collaboration with internationally acclaimed artists and creatives. Presented annually, the collaboration invites a hand-selected artist to create the unique label and packaging that accompanies the launch of Dom Pérignon’s most recent vintage champagnes. These limited edition artist collaboration vintages are highly sought after by art lovers and collectors worldwide. 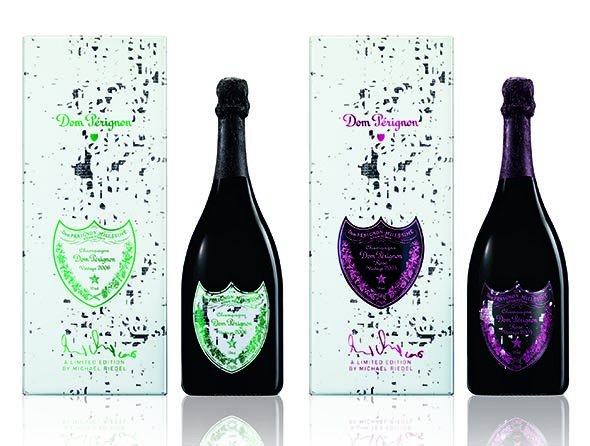 This year, Dom Pérignon has collaborated with German conceptual artist Michael Riedel in the creation of the ‘P2 Monolith’, the striking display case within which their prized Ultimate Dom Pérignon P2 1998 champagne is housed. The sculptural display case is crafted from black marble, the surface of which has been heavily embellished with disjointed black and white text taken from the html code of an art supply website. The key visuals used in the creation of the display case were taken from wallpaper that Riedel designed and presented at a recent exhibition at the David Zwirner Gallery in New York.

In addition, Riedel has also designed the labels and boxes for the Dom Pérignon Vintage 2006 and Dom Pérignon Rosé Vintage 2004 champagnes. The design that adorns the packaging was created by digitally deconstructed and repeatedly superimposing the brand’s initials (‘D’ and ‘P’) onto the surface to create the illusion of movement across the simple white surface. Vibrant green and pink embellishments are used to colour the brand’s logo, iconic shield, text and foil wrappings that are featured on each bottle and box. Active since the 1990s, Riedel is based in Frankfurt and is known for his conceptual work relating to the appropriation of disjointed fragments of texts, the use of digitisation and the repetition of existing visual and text-based material. In 2017, Riedel will presenting two major museum solo exhibitions of his work at Kunsthalle Zurich and Museum Angewandte Kunst in Frankfurt.

In 2014, Dom Pérignon collaborated with Iris van Herpen in the creation of a display box that showcased her interest in architectural and technological 3D printing techniques. Known for her highly sculptural aesthetic, van Herpen had previously explored the innovations of 3D printing in her highly successful 2010 fashion collection. Working with the theme of ‘metamorphosis’, van Herpen’s limited edition range focused on the continual transformation and development that occurs within a bottle until the champagne inside has matured to its most excellent form. Enticingly Gothic and highly architectural in design, the complex black and green display case of van Herpen’s ‘Cocoonase’ (the enzyme produced by silkworms in the final stages of their transformation) suggest the mysterious metamorphosis that each precious bottle endures in it’s lifetime.

The previous year, Dom Pérignon experienced their most successful limited edition series in collaboration with Jeff Koons, who created display boxes based on his signature oversized balloon sculptures and installations. The bulbous display cases were modelled on the ‘Venus of Willendorf’, the palaeolithic fertility icon that Jeff Koons had previously re-imagined for his own two-foot-high sculpture. Sensuously curvaceous and feminine, Koons’ display case expresses the commonality of Dom Pérignon and its collaborating artists, as two groups who have total faith in the power of creation and who celebrate this incredible human creative potential.