Memories and dust are all that will remain at the conclusion of ‘Damnatio Memoriae’, the current exhibition at Galerie Rolando Anselmi by Italian sculptor Arcangelo Sassolino. The exhibition features an absorbing and destructive conceptual interaction between a large mechanical sanding device and the surface of a Classical marble torso. The Latin title ‘Damnatio Memoriae’ (literally, ‘damnation of memory’) refers to the Ancient Roman custom of dishonouring those who brought disrepute to the Roman State by deliberately erasing all known references and representations of their existence. Commonly utilised as the highest form of punishment for treason, it was thought that removing all traces of the guilty party and pretending as though he or she had never existed would preserve the greater honour of the city and its citizens. It is in the wake of this custom that Sassolino attempts to erase the restrictive idealism of the Classical tradition. 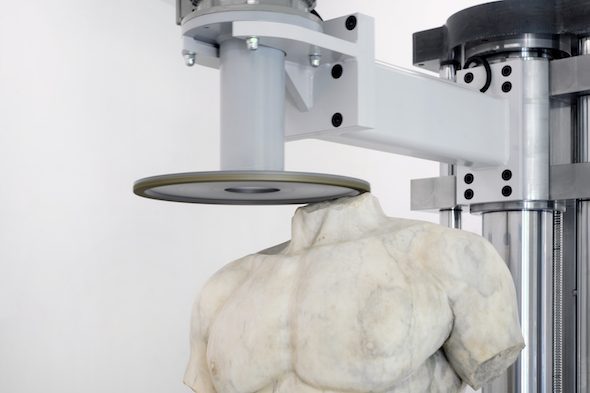 Towering over the visitor at 3.3 metres tall, the mechanical sanding device is composed of milled stainless steel and a custom-made waterless diamond sander. The hand-sculpted marble statue is positioned in front of the machine like a haughty and defiant victim. Based on a historical original, the muscular and idealised male form represents the incredible beauty and constricting parameters of the Classical aesthetic. Over the course of the performance, the diamond sander periodically wears away a thin cross-section of the sculpture’s marble surface, completely engulfing the gallery space in a misty haze of fine marble dust, and necessitating the need for viewers to don protective masks. The machine is only switched on for one hour each day that the gallery is open, resulting in roughly half a centimetre of sculpture being removed during each session. Gallery staff estimate that by the conclusion of the exhibition in mid-December, the sculpture will be worn down to the figure’s navel. Sassolino’s installation both conceptually and literally erases the physical presence and symbolic power of the Classical aesthetic. In this way, the interactions serves as a revolutionary act against the oppressive and restrictive confines of an art historical narrative that prizes the Classical as the finest example of Western art. 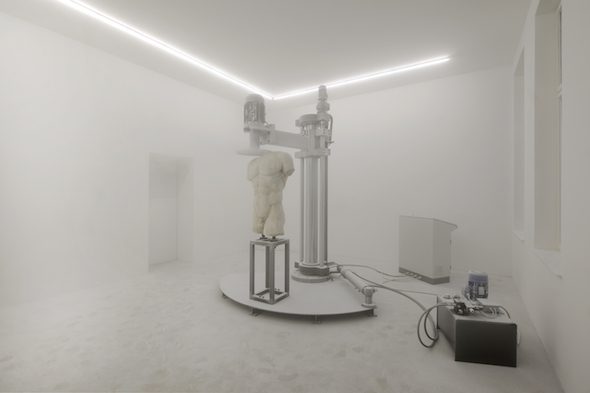 Through his re-imagining of the Roman custom of Damnatio Memoriae, Sassolino provokes unsettling questions about the value of the Western art historical narrative in the contemporary imagination. In his attempt to destroy the physical presence of the Classical marble sculpture, Sassolino poignantly demonstrates his belief in the need for contemporary artists to destroy the restrictive rules, aesthetics and parameters of the past in order to create something new. The work acknowledges the need for Italian artists, in particular, to emerge from the gilded cage of Classicism and break into the exciting new realms of contemporary art practice. The fact that the sculpted torso itself is a copy of a historical original is indicative of the problematic nature of attempting to perform the act of Damnatio Memoriae in a post-modern world. Given the plethora of information, copying and recording devices in the contemporary age, Sassolino admits—even as he attempts to break away from the Italian tradition—that attempts to completely discard the past are fruitless. There can be no doubt that the art of the past will always be a great influence and reference for contemporary artists. However, he reminds us that there should also be a constant breaking free of the restrictive conventions and traditions of the past to create the innovative art of the future. 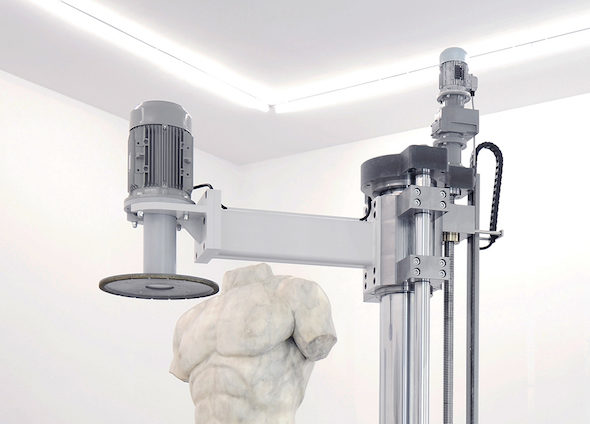 Caitlin Eyre is an Australian freelance writer living and working in Berlin.