My invitation to the studio of artist Euan Williams came with strict instructions to bring a pen: “It shouldn’t be a biro, or water resistant. It should be an ink that could absorb into the paper”. So, slightly perplexed but with pen in hand, I made my way to his ground floor studio, tucked away in a quiet hinterhof amidst the upmarket and genteel streets of Wilmersdorf.

The pen, it turns out, is part of an ongoing ritual that Williams performs with each new visitor to the studio. On his request, I drew a dot on a piece of white paper, which he suspended in a large glass jar containing water that would slowly absorb upwards, separating the colour composition of the ink, and simultaneously marking the duration of our conversation. An eccentric introduction; however, looking at some previous ‘visits’, it says much about what happens in this space—both playful experiment and diligent repetitions, with some surprisingly beautiful results. 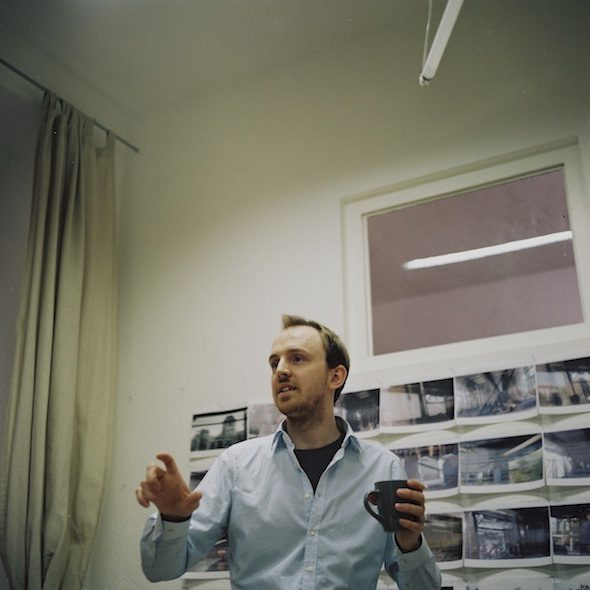 Williams studied with Olafur Eliasson at the Institut für Raumexperimente (Institute for Spatial Experiments), an educational project initiated in Berlin in 2009, which ran for five years. A satellite of the UDK, it was interwoven with Eliasson’s studio and produced a number of artists now becoming established in their own right. The school had a very particular ethos, not dissimilar from the interdisciplinary, ‘Gesamtkunstwerke’ ideology of Bauhaus or Black Mountain College, and equally peppered with big name visitors. It is a point of reference that cannot be escaped. There are motifs that often appear in the work of Eliasson and his students; light, refractions, landscape, nature, journeys, mirrors, time, repetitions and perceptual experiments, all of which can be seen in Williams’ work. I suggested that at times these ingredients have been used by other graduates of the Institute in ways that could appear formulaic, that there is an obvious ‘Eliasson mold’; however, Williams does not fall into this category. Though clearly committed to the spirit of experimentation and curiosity, there is a quiet sensibility to the work, which is entirely his own. 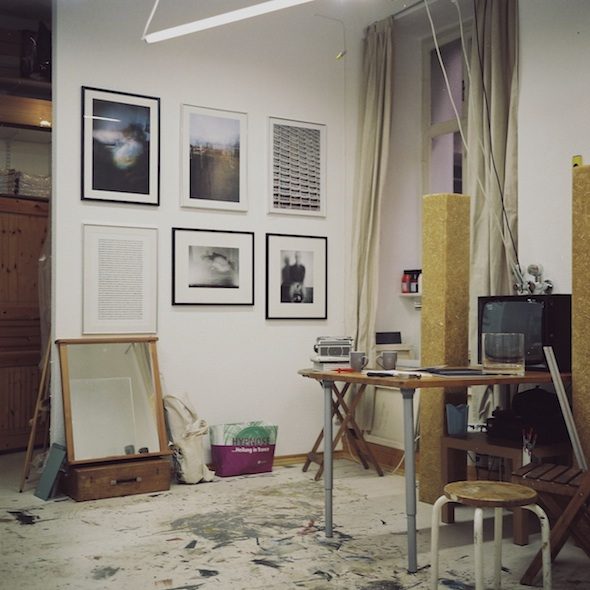 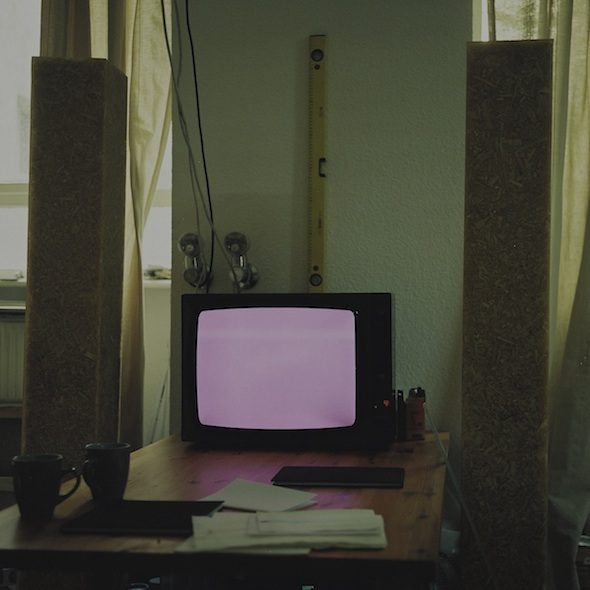 “There was a lot of emphasis on considering connections, a narrative that runs between works or a manifesto, so no one work would ever be considered in isolation”. This meta-approach to making is very apparent here: in the studio there are framed photographs on the wall, small delicate paper works, video stills story-boarding on the wall and a confusion of lights, wires, mirrors and glass panes. There is a box-style TV monitor on which I was mildly hypnotized by full screen colour shifts through the spectrum. The DVD playing is the key component to one of Williams’ larger projects, which invariably happen outside the studio in a number of different contexts. ‘Televisionsing’, made in collaboration with the Neue Nationalgalerie, occupied a whole apartment block for an evening, where 35 of the 50 tenants agreed to play the DVD given to them by the artist on their own television sets, computers or, in one case, on a mobile phone. Simultaneously, each screen shifted through the colour spectrum creating not only a cityscape light installation when seen from the street, but a community experience of interacting with art in the most domestic and private space of their own living room. On another occasion at the Neue Nationalgalerie, Williams gave a talk entitled ‘OUT’ about simultaneity and distance, which was then projected via a large satellite dish as radio waves into space. Whilst doing so he reported how far the recording had travelled during the talk, projecting this information back onto the ceiling above the stage. By the end of the 25 minutes, Williams’ contemplations on time were flying through the asteroid belt between Mars and Jupiter. He will be sending out an email to the people who were at the talk when the radio wave reaches the first star, (a red dwarf star called Wolf 359) on Friday, August 12th, 2022. 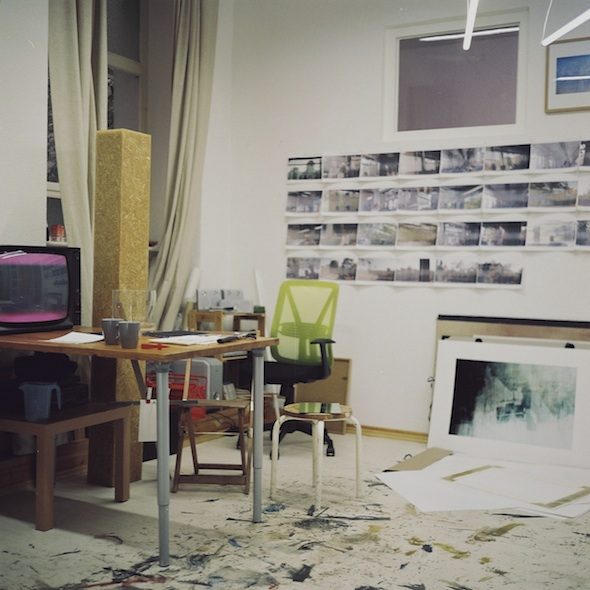 This double layering, both conceptually and physically, is a guiding narrative in Williams’ practice, to use his own terms. Back in the studio, the storyboard images covering one wall trace out a film shot on the S-Bahn, looking through glass to reflections beyond and the interplays of light. Taken from hours of footage, what appears to be a highly intuitive editing process is happening here in the images, to be followed by days of computer editing at his desktop. He shows me ‘sketches’; short video clips of himself mirrored in the camera while placing various sheets of reflective glass between the camera and the mirror. There is a slightly comic feel to these experiments, amidst the simplicity of glass panes and basic electronics, there is a glimpse of a mad scientist lost in a single-minded pursuit of discovery. 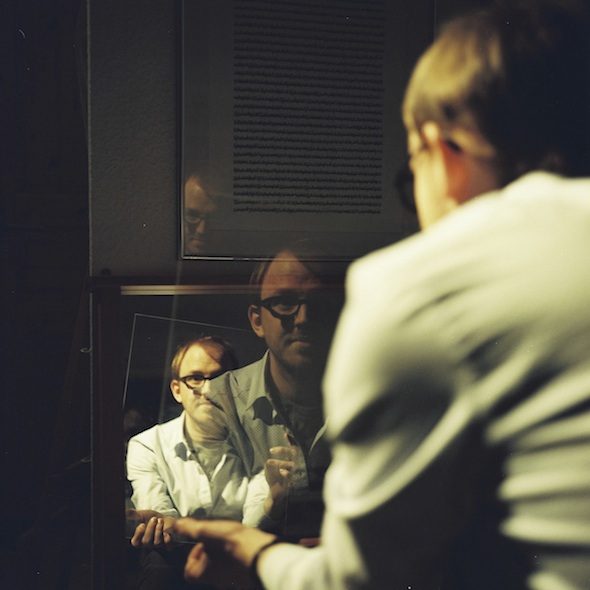 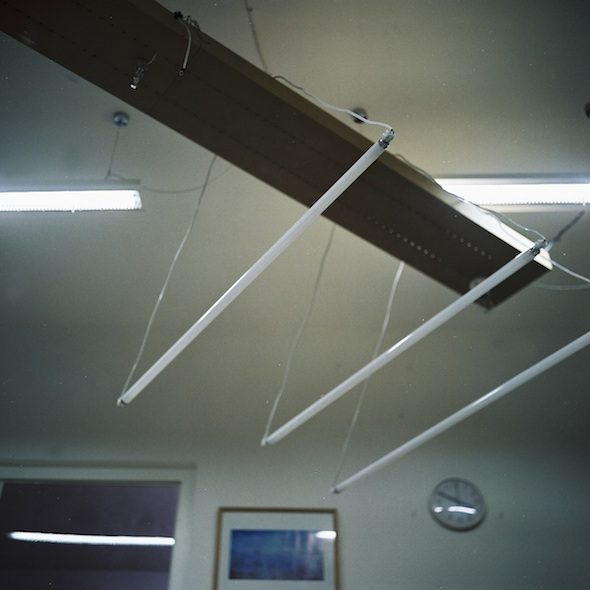 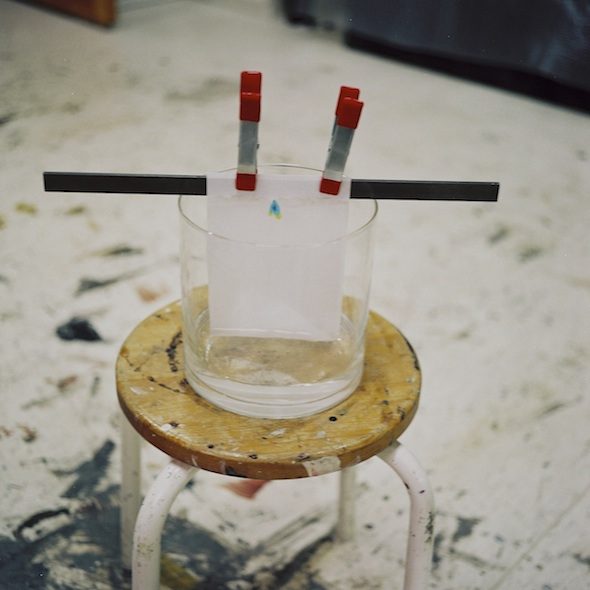 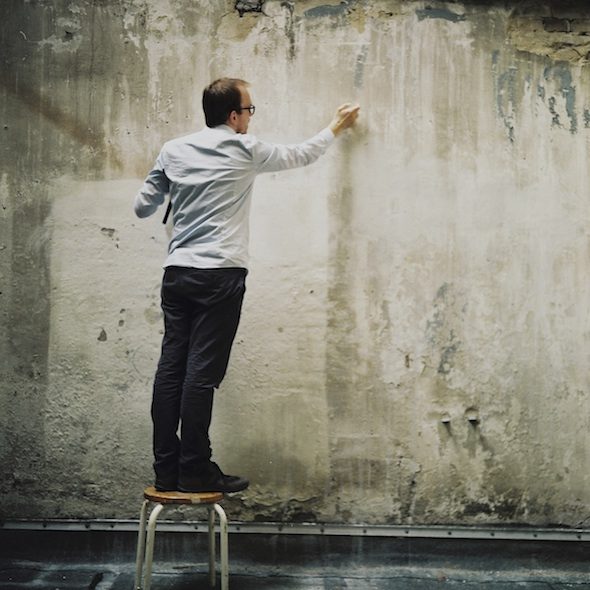 He shows me various light bulbs and on a small section of white wall we watch how the light changes in colour as it warms up; first blue then green then yellow. It’s an everyday phenomena that close attention renders into a highly aesthetic and contemplative moment. The works are subtle, and it takes some time to tune into this. He was particularly excited about one of the bulbs; however, having pinched it from a pub toilet in England, returning to Berlin he found the connection points incompatible. In another sense, this twist of British difference is perhaps what makes his practice so special, as Williams adds an element of subversion and domesticity, not to mention absurdity, to a language otherwise steeped in sincerity and the sublime. From experiencing a ganzfeld moment while sat on the pub loo, to collecting receipts for everything he and fellow artist Diana Sprenger ever ate—which are then pulped and made into very slight abstract paper works—he uses the tropes of minimalism and conceptual art with an air of absurdism, in the best way.

My ink dot magically moved all the way up the paper, leaving no trace behind it. ‘That’s never happened before!’ he exclaims. We have a little moment of amused wonder as he unpegs the paper, marking the official end of our visit. I will, he tells me, be getting my ink dot paper back sometime in the future, once he is convinced that I have forgotten all about it.