In October 2016, D’EST Prologue is presenting ‘O’ Mystical East and West’, an event which is the first step for establishing ‘D’EST: A Multi-Curatorial Online Platform for Video Art from the Former “East” and “West” in the future. Initiated by Ulrike Gerhardt and produced by Atelier 35, Romania, ‘D’EST Prologue’ will be hosting a range of talks and video art screenings over the course of two days, including a lecture by Agata Pyzik, author of the book ‘Poor But Sexy: Culture Clashes in Europe East and West.’ 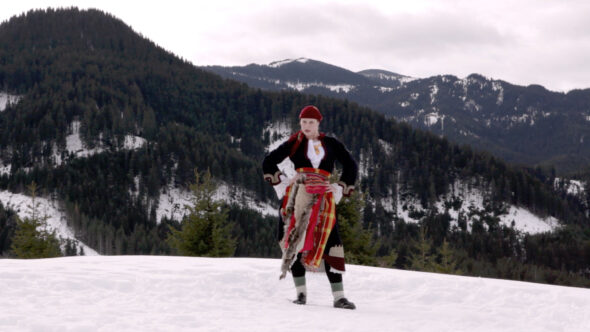 O’ Mystical East and West, curated by Xandra Popescu, is a research project developed to reflect and thematise the period of post-socialist transformation during the 1990s. The prologue event introduces a wealth of artists and directors who explore this transformation from the perspective of the former “East” and “West”. The works of contemporary video art shown at ‘D’EST Prologue’ critically interrogate mythical and phantasmic images of the the imaginary “West” and “East”.

The selected works screened at D’EST Prologue will shine a light on the mapping of the female and collective identity, exploring gender codes, clichés, and geopolitical stereotypes. The pieces attempt to raise still-unanswered questions as to what the transformation means for the adult generation today, particularly those who came of age in the 1980s and 90s.

Artists Ioana Cojocariu, Larisa Crunțeanu, Gery Georgieva, Goshka Macuga, Anca Munteanu Rimnic as well as Anetta Mona Chişa and Lucia Tkáčová bring the fabricated image of the “Eastern European woman” into question and reflect how it has changed since the end of the Cold War, when it moved away from the communist ideal of the emancipated worker. The Bureau of Melodramatic Research and Ivana Mladenović challenge the process of exotization of “Eastern Europe” before and after the transformation and emphasize the relation between turbo-capitalism and “Eastern European” pop culture. Popescu will introduce video works that critically address naturalised myths and legends and their propagandistic content, going beyond clichés and stereotypes.

Following its official launch at the beginning of 2017, O’ Mystical East and West will be available as a research tool and informational resource for art lovers and professionals alike. Until then, the prologue event provides the opportunity of a glimpse into their already remarkable artistic catalogue, and the chance to engage in a dialogue that may otherwise be both under-represented and under-explored.

D’EST Prologue: O’ Mystical East and West is supported by the Centenart Program of the Romanian Cultural Institute and the National Cultural Fund Administration in Romania. The project is hosted by District Berlin.