The candle-lit, outdoor reception at Dock 11 theatre provided for a welcoming atmosphere to the opening night of Plataforma festival. The evening’s performance was comprised of three pieces, choreographed and performed by André Uerba, Lola Lustosa and Tatiana Mejia respectively.

As the first piece, titled ‘Terrarium’, unfolded, André Uerba gradually revealed himself to be a master manipulator of his carefully constructed environment. With the use of various lighting designs ranging from a swinging tube lamp to a blazing sparkler, the space became his lab as he experimented with a series of illusions and impressed his silhouette upon the audience’s inner-eyelids. The stage was further transformed into a fairground as, adorned head to toe in a flower-suit, he lounged lethargically on top of a coin-operated kiddie ride, perhaps a playful rendition of Nijinsky’s iconic, closing scene of ‘L’Après-midi d’un Faune’. The use of larger-than-life projections of roller-coaster rides and raving house music created a surreal collage in which the ultimate thrill-seeking experience was contrasted with a slow, deliberate dynamic and a wry sense of humour. 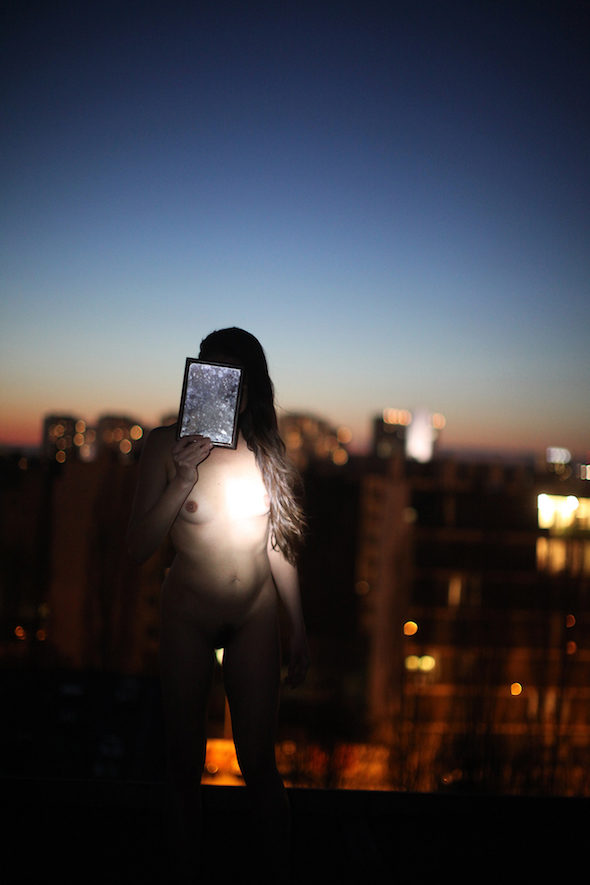 Lola Lustosa: ‘No ID Represents Me’, 2016 // Courtesy of Plataforma Festival

The second piece, ‘No ID Represents Me’, functioned as a singular statement. The naked body of Lola Lustosa stood at the front of a dimly lit stage, holding a circular mirror and reflecting a spotlight sharply into the audience’s eyes. Immediately, her voice rang out from behind the mirror, proclaiming that ‘this is the first time she had shown herself’, thus emphasising the extent of her vulnerability. She pursued to move closer to the audience, demanding the viewer’s full attention as she recited existential questions and denied her own existence. In this elegant synergy of minimal movement, meticulous lighting and looped sound, her body was presented artfully, leaving the viewer to ponder on her conceded notions of illusion and reality.

Dressed in a multi-coloured, voluptuous skirt and brandishing a pair of red Ray Ban-style sunglasses, Tatiana Mejia opened her piece ‘Ga-gá’ with a confident pose. Inspired by the traditional form of festival music that originated in Haïti and was later imported to the Dominican Republic, Mejia offered her own, unique take on Gagá. Her performance progressed to include singing, whistling and a vigorous body shaking which was comically fortified by her trembling costume. Reminiscent of Sia’s music videos featuring Maddie Ziegler or perhaps inspired by Gagá voodoo rituals, she incorporated a series of extreme facial expressions, performed with much precision. As the wild tremors took over her body and the live drums elevated her into a trance-like state, the audience was drawn in to her performance and became mesmerised by her explosive energy.

The Ibero-American festival Plataforma, held for the fourth time, showcases works by emerging artists in the fields of dance, performance, installation art and video-dance. Although the artists of Plataforma all stem from Spain, Portugal and Latin America, the works are of a diversified nature, hereby testifying to the mix of international cultural influences.