The Lightart Festival took place for the first time in Weilheim, Bavaria last week. As Philipp Geist, one of the most famous light artists in the world, was raised in Weilheim, it was high time the town initiated this festival. One of his very first exhibitions, back in 1996, was in an old barn in Weilheim. Now, 20 years later, at the light festival 2016, the same old barn was home to his art again; the circle has been closed. This time, of course, Geist had the opportunity to use the whole town center for his light art. 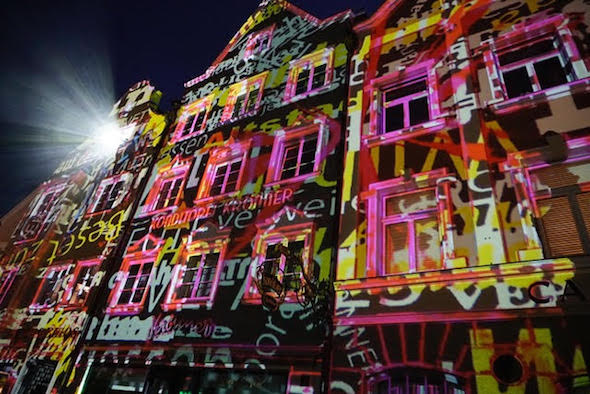 Presently, Geist is based in Berlin, where he works on international projects, and is perhaps most well-known for his light projections on the Cristo Redentor in Rio de Janeiro in 2014 or the Azadi Tower in Teheran in 2015. In light of this, the team of Lichtkunst Weilheim, Ragnhild Thieler, and Gabriele Zelisko spared no effort to turn this huge event into reality. In addition to Philipp Geist, two other video art performers— Fausto Morales and Robert Seidel—took part in the festival. In cooperation with resident artists, they succeeded in cloaking Weilheim in colored patterns and illuminating the medieval buildings of the town center with varying sequences of light: the formerly small and tidy city was transformed into an explosive utopian space. 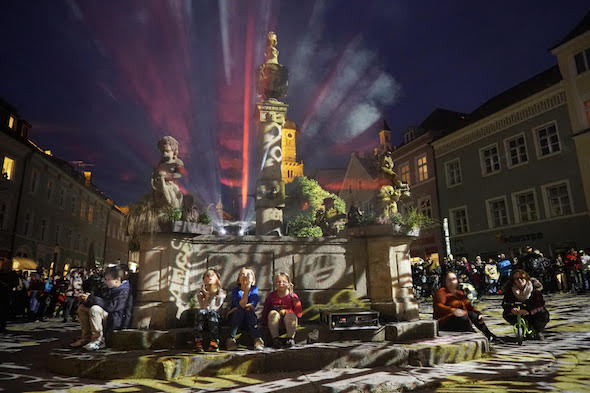 My daughter and I went to the town center, where the show was supposed to take place, but hadn’t yet begun. The autumn sun went down and colored everything in the typical Bavarian pre-alpine glory. My three-year-old daughter said: “look at the clouds! They’re decorating themselves with pink and red. This is really a great light show!”

With this, she got to the heart of the matter: all the buildings and spectators were just canvas, ready to be colored in shades of pink. The show started as soon as the sun had vanished, and the light from the huge projectors—arranged by Philipp Geist—wrapped the town center in completely new shades. The main artwork was the light itself, and somehow it managed to change everything. All the timbered houses of the Weilheim city center seemed to turn into completely different beings under the artist’s light visuals. Light sculptures—with their colored patterns and images and the terms “Wilhaim” (an old name for the city), “Heimat” (Homeland) and “Zeit” (time) as well as “Stadttore” (town gates)— were projected on every facade and onto the floor, as well as on the people themselves. The good old conventional town was transformed with completely new impressions, and it even seemed that the city revealed secrets to us that even it hadn’t known before. The event was well-documented through smartphones and everyone created their own, new perspective of a town they considered familiar and well-known. 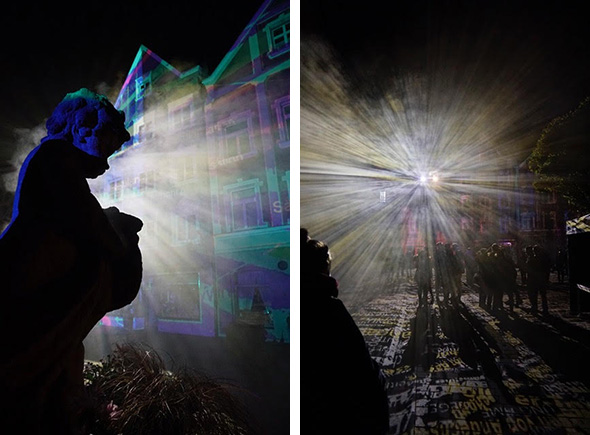 When I talked to Geist later, he remarked how amazing it was to reach such a variety of different citizens in one public area. From young to old, students and teachers, wheelchair users and bicycle riders: some people let it wash over them briefly, while others visited every one of the event’s exhibitions.

As hours went by, the town began to get quieter, the light became more mysterious and the scene changed took on an almost otherworldly atmosphere, underscored by the spherical sounds of Martin Gretschmann. We stayed until the boundaries between people and houses merged with the light and we couldn’t be sure anymore whether the moving light came from the projectors or from an inward source. It was a historical transformation: the city opened up through the illumination of layers of time and mutual differences that are the characteristic features of this area. 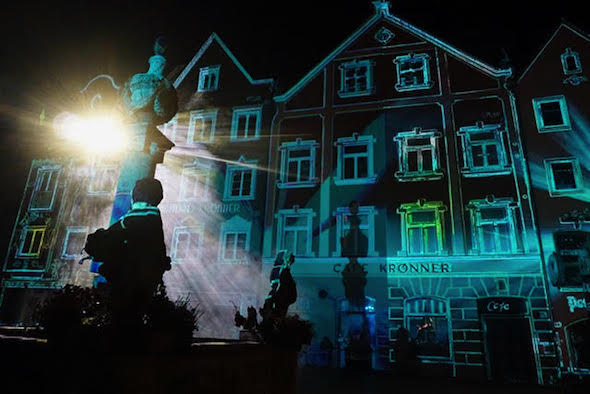 Fausto Morales, with sound support by Jorge Ramirez-Escudero, projected his visuals on the old prison, which today functions as the music school of Weilheim. With Morales’ visuals, the music school told us of its past as a prison; which is especially impressive if remember that Adolf Hitler was arrested by the Weilheim police in 1924 and was brought from there to the prison of Landsberg am Lech. Together with the self-composed sounds, reminiscent of a science fiction soundtrack, an impressive atmosphere permeated the surroundings. The third act, by Robert Seidel, used the old city wall (built in the 15th century) for his display. The former solid walls turned into a panta-rhei-psychedelic light and colored organic interplay of various spatio-structural concepts.

Light has the power to give you the experience of alternative worlds, steeped in desire and nostalgia. Light art, in this sense, is not mere unpolitical decoration. In response to my question concerning the concept behind all this, Geist said that we don’t need a big political, one-dimensional concept or provocative symbols. Instead, we need inspiration, new narratives and impressions that touch us: this is a real political statement that marks a subtle process of change.