The scale and placement of German artist Susanne Rottenbacher‘s impressive light sculptures varies greatly from project to project, but their construction follows a certain detailed pattern that Rottenbacher has perfected over the years. After her completion of a Master’s in Light at the Bartlett in London, Rottenbacher initially began her career as a creative consultant on projects for the Deutsche Oper Berlin and in architecture studios. About a decade ago, she decided to go solo and focus on her own art practice, and its been booming ever since, with large-scale commissions by the Max Planck Institute in Berlin, and exhibitions in galleries and museums worldwide. 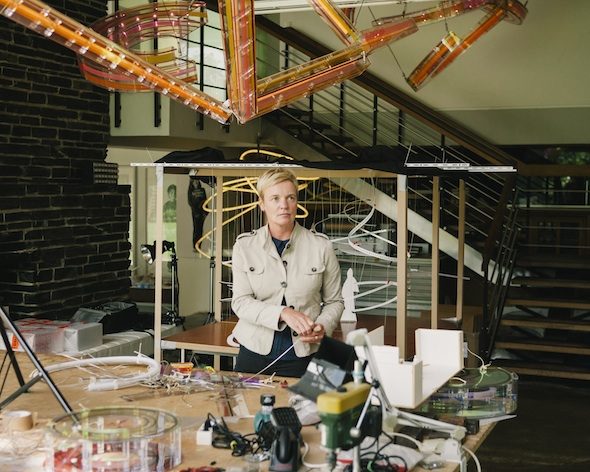 Rottenbacher and her photographer husband—an art world power couple on the Berlin scene—share a gorgeous 1960s modernist dream home in Berlin’s West End district, which functions as a studio, showroom and living space for the pair. As we enter the home—which has carefully designed horizontal planes, with floor to ceiling windows providing a view of the spacious backyard— we are treated to a well-choreographed and chronologically-oriented tour of the artist’s works, beginning with her smaller, earlier ‘Farbräume’ light boxes. The wall-mounted, framed works from her self-proclaimed “container phase” use many elements, like plexiglass and LEDs, still found in her recent works, but in a much more smooth and static manner. As Rottenbacher’s practice evolved, a clear conceptual concern for movement emerged in her work, as pieces became more curved and flowing. She refers to her newer works as 3D drawings in space, and many of the pieces take their cue from dance. 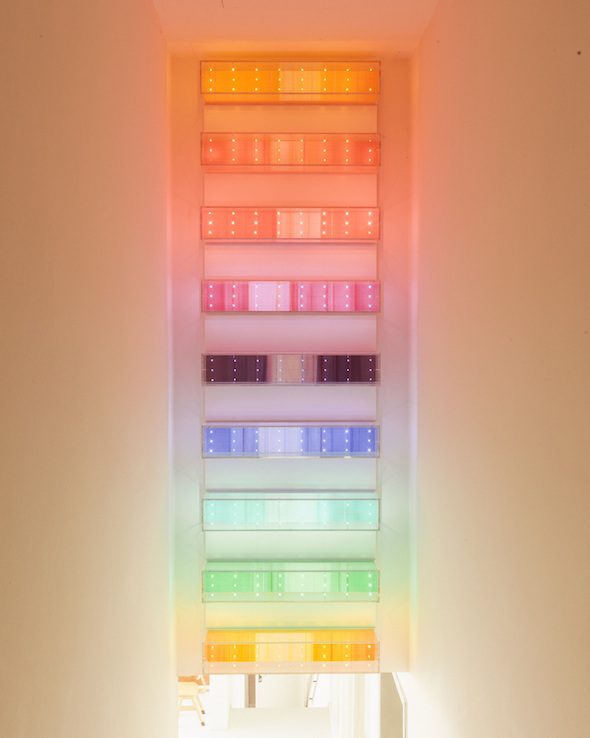 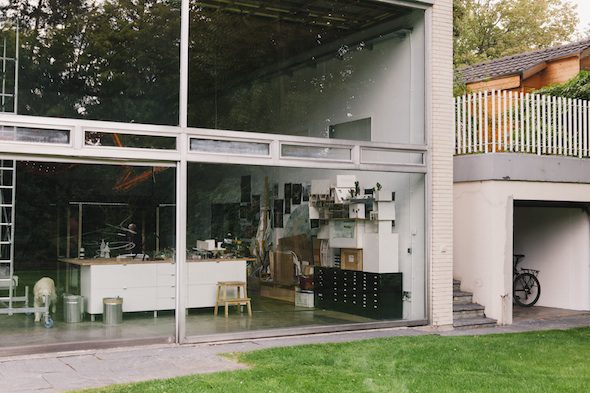 The high-ceilinged, naturally-lit studio offers exactly what Rottenbacher’s detailed light works demand: she’s able to experiment with an array of enormous materials and advanced techniques directly in the space. She works with the methodology of an architect, creating scale models of spaces and 3D renders in Rhino, which later guide her larger-scale production outside the studio. Rottenbacher prefers the pliability of LED light tubes over conventional bulbs, and she often uses tension, cold- and warm-shaping, in the fabrication of her dynamic new works. The expressivity in her recent pieces—such as her 2015 ‘If I was a Dancer’ for Samuelis Baumgarte Art Consulting—have a clear connection to the dizzying movements of ribbon twirlers. 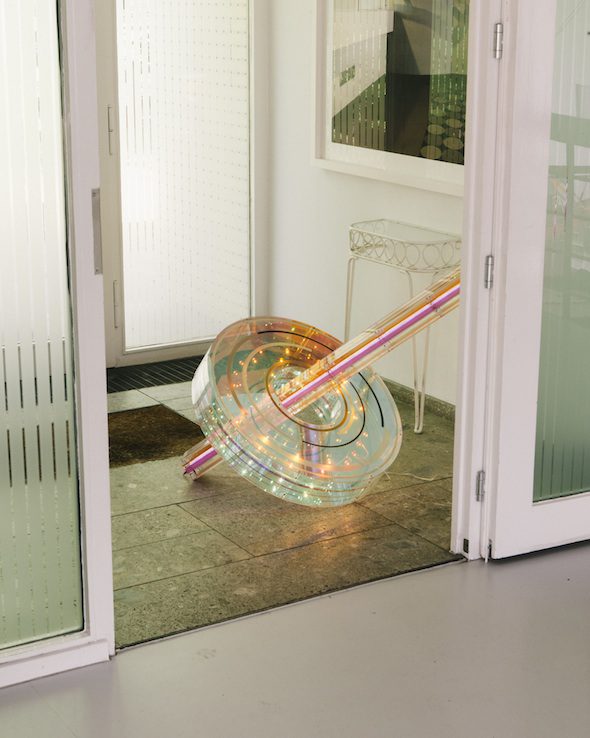 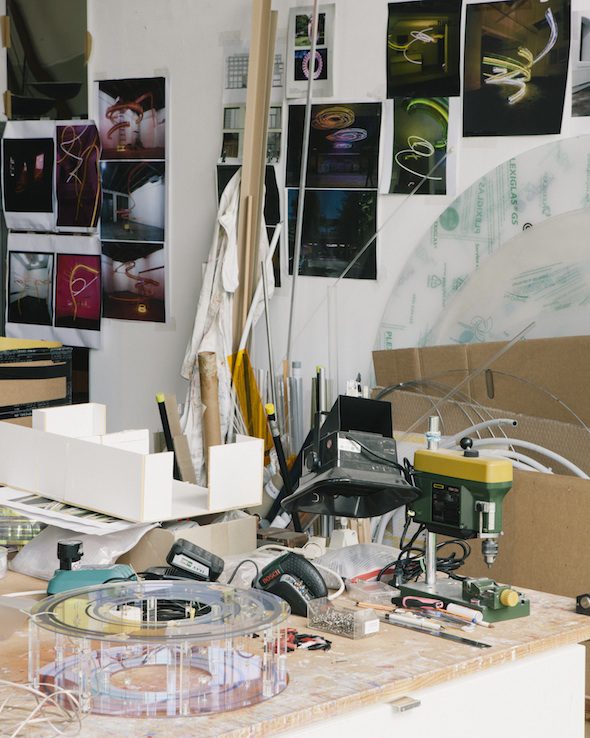 As Rottenbacher’s practice has unfolded so have the forms her works take: from her early light boxes to present tidal structures, the sophistication of her oeuvre can be read through its objects. In many cases, the impression of the works changes depending on the time they’re viewed, especially those outdoor installations that become illuminated as night falls. Her unique proximity to her works, living and working in the same space, allows Rottenbacher to track their properties at different times of the day. 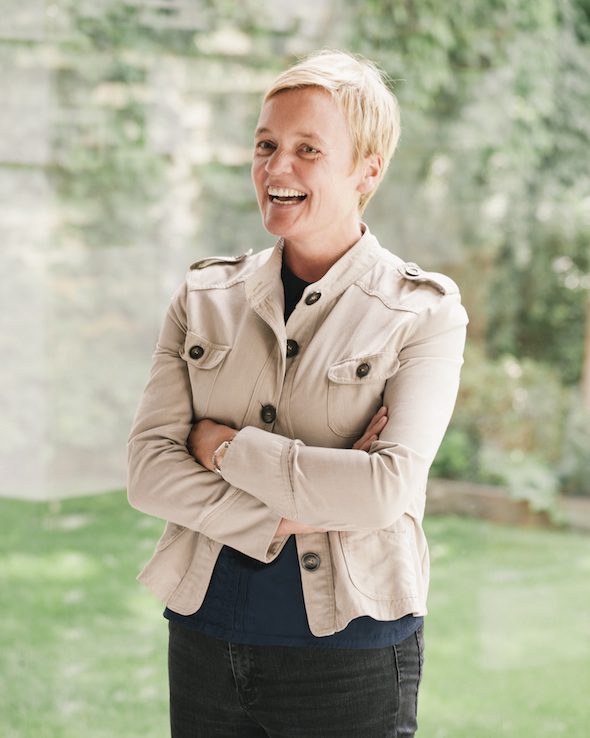 Rottenbacher is adept at looking at her projects from all angles, in space and time. As a student of architecture and planning as well as light design, her public space art works are so successful because they manage to seamlessly connect the practical dimensions with the aesthetic. The colourful lightness—both playful and luminous—of Rottenbacher’s sculptures has made them sought-after items for site-specific commissions as well as art world exhibitions.

Alison Hugill has a Master in Art Theory from Goldsmiths College, University of London (2011). Her research focuses on marxist-feminist politics and aesthetic theories of community, communication and communism. Alison is an editor, writer and curator based in Berlin and a host of Berlin Community Radio show ‘Hystereo’.