Should you become stranded in space, fear not. You have only to consult the shuttle’s closet. There you will find supplies to jerry-rig a quick fix. This was the no frills solution suggested by the big-budget 1995 American Space thriller, ‘Apollo 13’. Like that movie, Halil Altındere‘s ‘Space Refugee’ at n.b.k. considers space travel at the juncture between fantasy and reality. But unlike the triumphalism of Hanks’ film, its tenor is hope, striated by pessimism and anguish. Mars, the exhibition suggests, will become a new home, to the millions of Syrians who have been displaced by civil war. 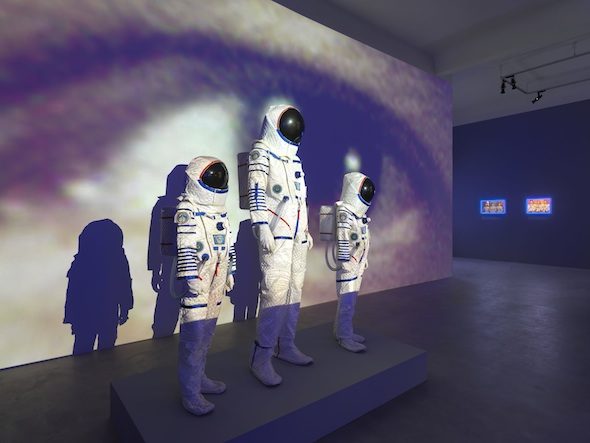 The exhibition piles cruel irony on cruel irony. For one thing, the red planet is named after the Greek god of war. For another, this dream of interstellar emigration feels a lot like interstellar exile. This is the exhibition’s central tension. It is exacerbated by Altındere’s straight face. Speaking at n.b.k. on October 20th, he suggested that this plan need not be science fiction. In this way, the show’s eery, wax museum quality extends into the artist’s oblique demeanour. The scene is cloaked with an intractable absurdity.

As if attempting to muster popular support for this mission, Altındere has turned the gallery into a hybrid between educational science centre and shrine. It is devoted to the Syrian Cosmonaut Muhammed Ahmed Farris, who spent seven days on the Soviet space station Mir in 1987, and is now exiled in Turkey, following his support of the uprising against Syrian President Bashar al-Assad. In one film, central to the show, Farris serves as a spokesperson for a peaceful life in space. He declaims that Syrians can rebuild Aleppo, and even build a society on Mars. Both are hard to fathom, as images from Syria cling in the imagination. Save the Children has just reported more “than 136 children… killed and 397 wounded [by banned cluster bombs] since” September 23rd. In April, the U.N. and the Arab League Envoy estimated that the civil war has claimed 400, 000 lives. It is impossible to describe the look of Aleppo without slipping into apocalyptic terminology. 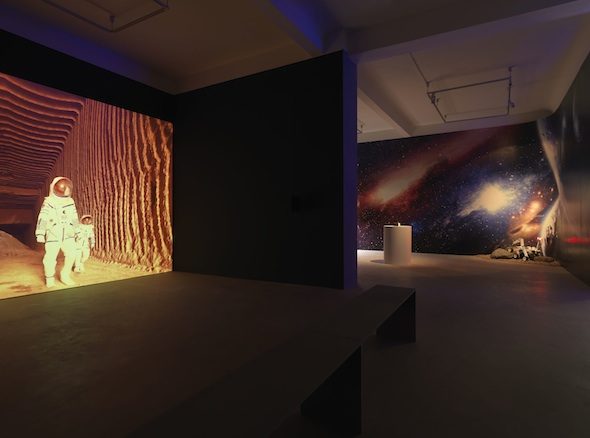 In Germany, Altındere’s dream of escape has a currency almost too obvious to point out. Those who feel that the country has a moral imperative to help refugees, struggle against the sickening resurgence of xenophobic nativism, given new firebrand in the right wing AFD party. Each Tuesday in Berlin, I find myself in the company of a handful of newly arrived Syrian students, in German language class. Consistently, their motivation stands out against the strained enthusiasm of international students and freelancers. On my way to the class, I pass a restaurant called Cafe Aleppo. Cafe Aleppo is situated on Flughafenstrasse (Airport Street), echoing the dark joke of Altındere’s photograph ‘Koefte Airlines’ (2016). Therein, a group of Syrian refugees stand on the roof of a passenger airplane in Turkey. The rotten punch-line, Altındere explains, is that this is the closest these people will ever come to an airplane, let alone a space shuttle. This exhibition braids tragedy with a faith in technology. In the aforementioned film, scholars and scientists eagerly explain the logistical challenges of colonizing Mars. While some explain the application of property law to outer-space, others opine on more material challenges. One zealous PhD candidate describes Elon Musk‘s ambition to lower the cost of space emigration to a “manageable” level—about half a million per head. It’s through details like this, that hope drains. 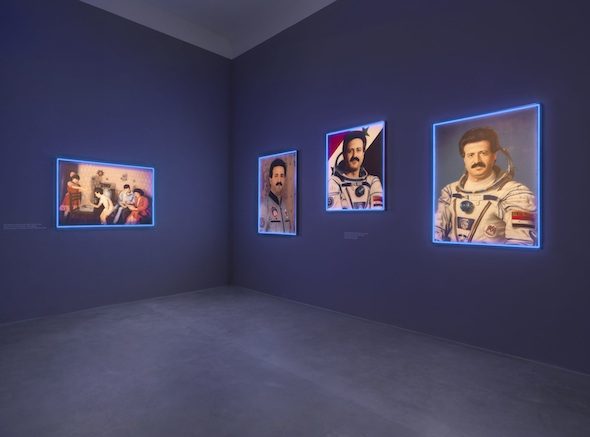 Altındere’s show confuses the division between contemporary art, political propaganda, and theatre. Looking at a set of space suits custom-made for this hypothetical exodus, I thought of Ilya Kabakov‘s 1988 mis-en-scene ‘The Man Who Flew into Space from his Apartment’, which allegorized a yearning to flee the USSR, with all of its social and economic constrictions. In the United States, Altındere’s liberating science fiction has kin in the Afro-Futurist movement, conceived by Sun Ra in the 1970s. In the exhibition’s main room, darkened lights cause several painted portraits of Farris and his comrades to twinkle. These images sit outside conventions of painting, defined by the contemporary art establishment. They are photorealistic, with shadows and highlights softly rendered. But while veracity seems paramount to the pictures, each also casts its subject as an icon, calling up the portraits of Soviet socialist realism, or those which Westerners have seen at mural scale, in news broadcasts from the vast region homogeneously referred to as “The Middle East.” Each portrait is framed by a tube of blue neon light, further saturating Altındere’s project with the a B-grade, science fiction luminescence. We’re drawn further into this escapist glow, through a virtual reality headset, that presents an orange desert world. There aren’t any people here, just robot pods and domed habitats. A few feet away from the headset, plants have been set up under a small light, alluding to the possibility of agriculture on Mars. Within the VR, a volcano is spewing neon lava. Only in a very grave situation could this be a hopeful place. 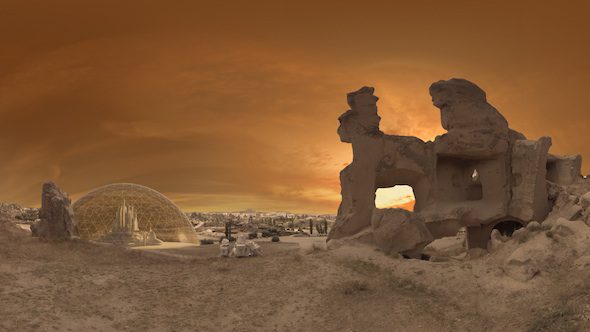 It’s unclear where Altındere’s use of science fiction aesthetics sits, on a scale between irony and earnest conviction. He may not know the answer himself. The show’s harsh resonance lives in this ambivalent place.