The Garden Of Eden—perhaps one of the most archaic themes throughout the history of art—has also been heavily explored in dance. From exuberant, ‘jungle-man’ costumes to glistening apples of sin, the theatre has never shied away from depicting the biblical version of paradise. An obvious example from the late 1950s is Embattled Garden (1958), a piece by modern dance pioneer Martha Graham, in which the dancers find themselves in a sensuous land of pleasure, spiked with the torturous frustrations of temptation. 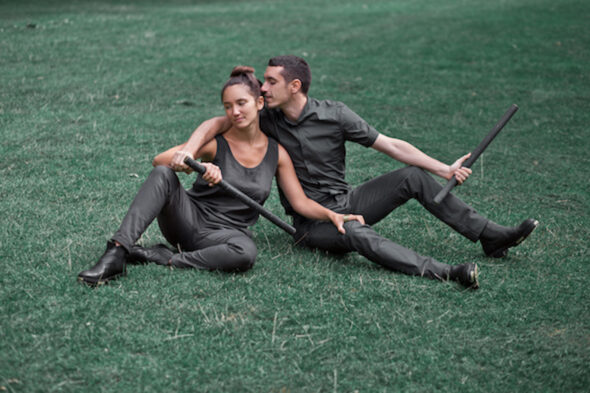 Unlike the typical approach to the emblematic garden, collaborators Ginevra Panzetti and Enrico Ticconi did not delve into exoticism with their piece ‘Le Jardin’ at Uferstudios this month. There was no sign of exuberant foliage or bountiful olive branches. Instead, the stage was empty apart from a dim blue screen that lit it up from behind. A sound score of birds chirping played softly in the background, which, combined with the barren stage, created a slightly eery atmosphere.

Panzetti and Ticconi, their arms linked, opened the piece with a sequence of meticulously synchronised steps. With a military precision they edged forwards, holding in their free hands long, metal batons, suggestive of soldiers readying for battle. The heavy combat boots they wore soon revealed themselves to be specially equipped with metal soles that rung out from under their feet: they began to tap a steady pulse and fell into a shared rhythm. 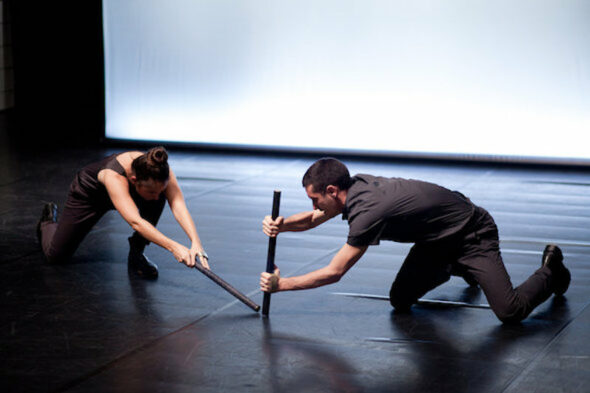 Isolated from the syncopated drum beat they set with their lower limbs, their upper bodies moved with an ethereal elegance. Reminiscent of 16th century paintings by the Old Masters, such as Flemish painter Maerten De Vos’ depiction of The Garden Of Eden, their torsos remained composed. With their gestures they began to explore their imaginary environment, scavenging for insects and occasionally stomping at them with their batons. As time went on the bugs seemed to grow ever bigger, until they reached a monstrous size that saw the dancers cowering away in fear. 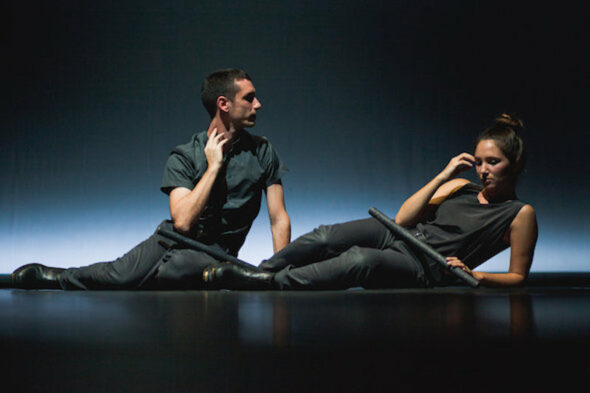 Their facial expressions reflected their discoveries, working through a wide range of emotions from fleeting surprise to pure anguish. Their relationship to each other was mostly playful, although at times it transformed into a vindictive fight for survival. However, the fight never quite escalated and the child-like teasing never quite met its exhaustion. In this way, their exchanges became somewhat frivolous and their emotive explorations remained relatively on the surface.

This was made up for with a variety of particularly beautiful poses; as the tapping continued, they moved through a series of interesting body positions, both alone and together. Moments of union were disrupted by moments of distraction, bringing about a balanced repertoire of well-explored movement ideas. ‘Le Jardin’, driven by its relentless rhythm underfoot, was without doubt a highly original take on the legendary Garden Of Eden and proved a contemporary fantasia in its own right.