There was a familiarity—even a sense of the familial—present in the anteroom of the Reduta theatre in Kreuzberg. A few weekends ago, the Gray Voice Ensemble presented their winter program there; titled ‘The Prayer for Community’, it included the Berlin-based choir singing the music of Albert McCloud, as well as different guest performers for each of the three showings. In the theatre lobby, the 30-or-so other spectators for Saturday afternoon’s concert made a distinct hum, though this one didn’t crackle. The Reduta is a blackbox, accommodating this smaller audience, the tea and small couches, the vocal punctuations of multiple audience members under the age of 9: it felt like a family’s living room in the fast-departing daylight, and then the theater door opened. 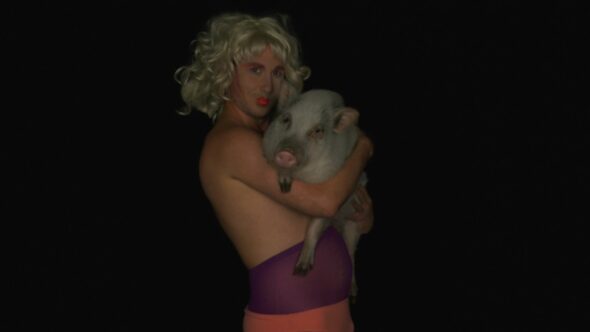 With the duo Alistair and Eva presenting a dance piece and Roman Ole performing songs for Sunday’s two performances, the first of the Ensemble’s guests was Mysti, who gave a performance and/or lecture and/or reading – a triad found in most texts on Mysti’s practice. But fair enough. She was onstage—serving a cute look and sardonically, warmly, very ably summoning our attention—and so was the text. Her piece, titled ‘a little trifle who argues big’, presented a lucid critique on the notion of positive affect in queer organizing. And, written densely but sitting on Mysti’s even voice, her language was rhythmic: she posed questions and followed them for a while or not at all; it was funny and made you a little uncomfortable because it prodded thought and didn’t feed anything to you, a poem in a way.

The Prayer itself started with a line of choir members entering, hugging the wall, and filing in behind a curtain; another group formed a circle across the stage. Then, the polyphony started, and the quality of the Reduta as a room containing people changed. Maybe it was just the effect of a choral voice—one that is collective, that, for the Greeks, was the voice of the public, the ideal spectator, the general population. No one singer is the star. But in no way was the group a speaking homogeneity either. For one, the singers cycled in and out of the roles of instrumentalist, tap-dancer, conductor, stage crew. Each time someone sang a solo I noticed that the chorus was comprised of variety – that of age, ethnicity, pregnant-or-not, accent, degree of training with which the voice was held. The choir was obviously practiced, and aware of its performativity, but there was nothing showy. 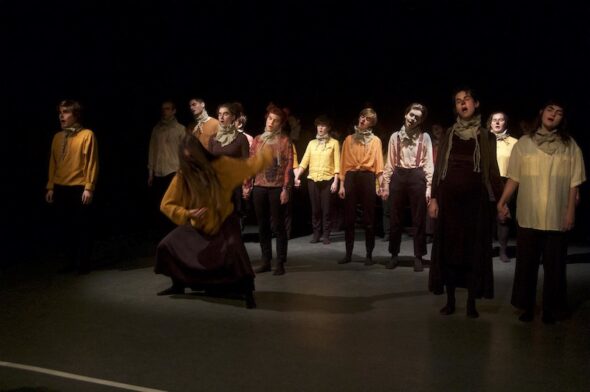 The Gray Voice Ensemble, ‘The Prayer for Community,’ 2016 // Photo by Philip Shafer

“Humbleness” was a word that kept coming to me: the poster for the Ensemble’s program bore a drawing of a scarecrow, and the 24 performers wore a variety of harvest colors with thick-drawn eyebrows, painted noses, and scarves of rope. They were effigies, almost-humans standing idle out in the fields and, because of it, incredibly wise. (Immobility and the threadbare earthiness of the scarecrow figure has been a condition for its immense wisdom as described in the 8th-century Japanese myths of Kojiki, all the way to the 1939 ‘Wizard of Oz’ movie).

In Mysti’s Mysti-ing, she said at one point, “Faith falters, and even while in the progress of nothing, faith still does it’s job.” The Ensemble’s lyrics didn’t speak of any progress—be it the Messianic type of the church choir, or the emancipatory of the political rally—but a reflectiveness ranging from the gnomic (“Love is the paradox of an omnipresent battlefield”) to the everyday (“…you are still the common sunflower. I will not lose my reverence for you”) to a little of both (“…naked, at Babel / waiting in line at the supermarket…”). Nor was there present in the Prayer faith in progress, but there was faith itself. Faith indissociable from a performer’s commitment to what they are animating, enacting in a room with an audience. And in this case, the means may have been choral music, but what was enacted in the performance and through the Ensemble’s shared program was most certainly a kind of community.