The Slovenian Cultural Centre, which was set up in Berlin in June 2016, was inaugurated with an eventful opening night at the classy Babylon Cinema last week. Guests were treated to an evening dedicated to Slovenian heritage, complete with performances, music and an extensive buffet of traditional dishes. In a series of opening speeches, the newly founded Slovenian Cultural Centre emphasised its links with Germany and the importance of performance as a mode of cultural exchange in the age of the smartphone. 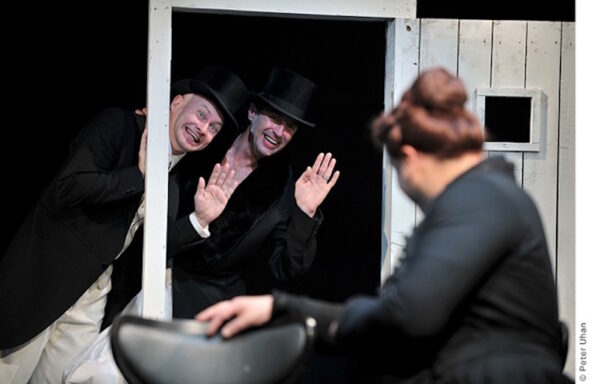 This aim was soon substantiated with the performance of a new music composition by contemporary composer Tomaž Bajželj. Inspired by Vinko Möderndorfer‘s poem, the two soloists Urška Arlič Gololičič and Martin Sušnik complimented each other in an operatic dialogue, accompanied by Vladimir Mlinarič (piano), Marko Zupan (flute), and Andrej Žust (horn). With the strong use of the voice and surprising instrumental turns, Bajželj’s modernist approach to opera proved fresh and engaging.

In a turn towards literature, the poet Aleš Šteger recited his short story ‘Einmal Im Leben Musst Du Nach Berlin’. The audience was captivated by his alluring voice and effortlessly taken on the journey he described, as his delivery deviated from a conventional retelling with the use of dramatic breaks and the recurring accentuation on the word ‘Berlin’.

The last performance of the evening was the German première of the silent play ‘Als Ich Tot War’. Director Diego de Brea brought to the stage a reinterpretation of Ernst Lubitsch’s 1916 eponymous film which, after its alleged disappearance several years ago, was found at the Slovenian Cinematheque archive. Performed by the experienced and versatile actors of the Slovene National Theatre Drama Ljubljana, the comedy did not fail to entertain. 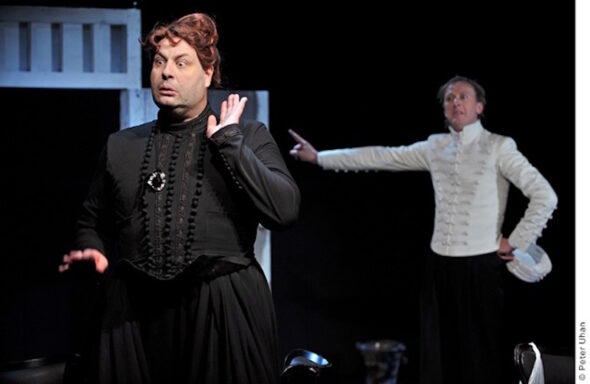 The all-male cast, featuring Alojz Svete as the scrawny husband, Boris Mihalj and Janez Škof in double roles, and Jernej Šugman as the beastly mother-in-law, played out a domestic drama set in a 20th century household. With the over-exaggeration of gestures and well-timed scenes, their miming told a story filled with slap-stick moments and hilarious surprises. The intricate piano accompaniment by composer Jože Šalej cleverly fortified the various climactic progressions and, with its sweeping dynamics, gave shape to the piece. The many sexual innuendos, although at times vulgar and distasteful, were executed with a rambunctious confidence. In this way, de Brea, with his commitment to the extremes, achieved an unapologetic theatrical style that did not take itself too seriously.

The opening night of the Slovenian Cultural Centre, with the presentation of a cross-section of Slovenia’s performing arts scene and with the aid of some fatty sausages such as Kranjska klobasa, succeeded in giving a taste of Slovenian culture and established itself as the appetiser for many cultural collaborations to come.