Robert Lazzarini’s Greenpoint studio is scenically located by the banks of the greasy Newtown Creek. In stark contrast to the superfund site, his environment of neutral grey wood floors and white walls is spotless. This uncluttered space is undoubtedly best suited for the process-heavy works produced there. 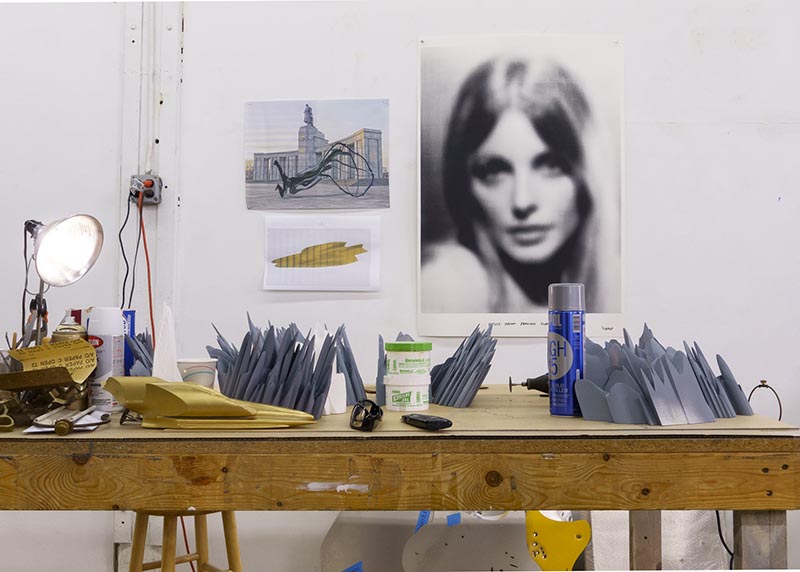 Canvases dutifully gessoed and sanded to a paper-smooth finish are mounted with ample room for visual downtime. These surfaces sport seamless paintings of what on first glance register as undulating crosshatching that gives off a visually-stimulating vibration. On closer inspection, the confounding Bridget Riley-esque lines converge to form a portrait of famously unfortunate starlet, Sharon Tate. The iconic nature of the Manson family victim’s smoky yet doe-eyed stare heralded the end of the “Summer of Love” when she was targeted by the clan of jacked-up stabbers. At the time they hoped this attack on a symbol of new wealth would be a catalyst to race and class warfare. 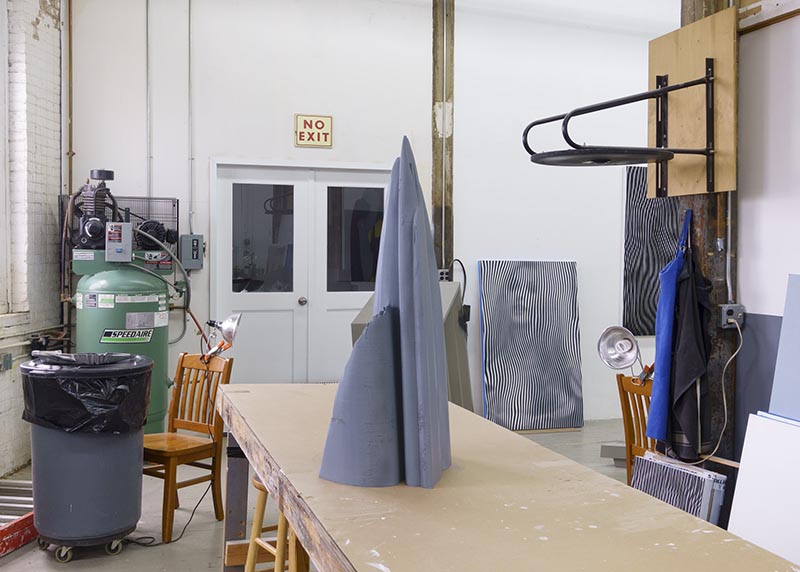 Today, the percentage of people who connect this spectral face with any incident of malice is relegated to fans of ‘Aquarius’, and/or firsthand interest in counter-cultural cinema about dolls. This degradation of meaning over time hints at the underpinnings of Lazzarini’s interest in Phenomenology. German philosopher Edmund Husserl would have directed viewers to decipher intentionality through the experience of a visually-irritating, psychedelic Tate to create a meaning separate from her original existence. A viewer today may instead be directed to have an experience of powerful waves, and a magic eye punchline, “ah ha, I see the pretty lady!” 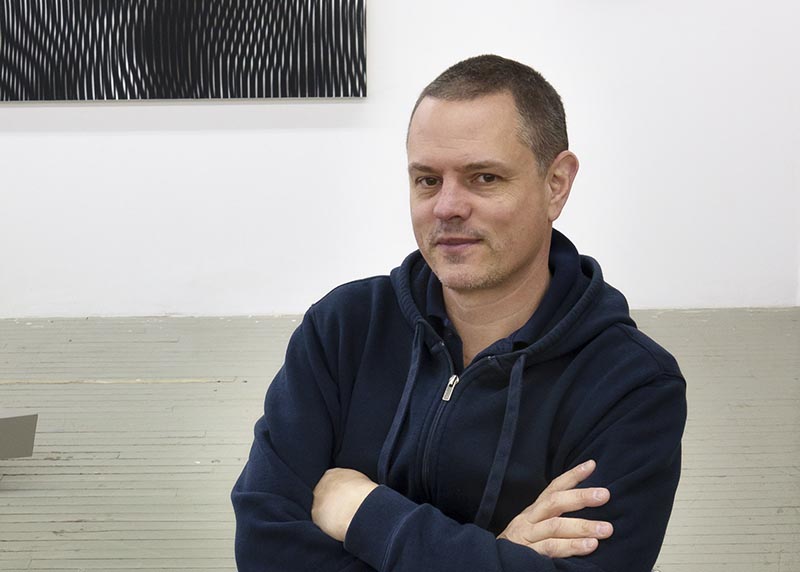 Through deciphering schema (a common understanding in relationship to external phenomena) we are only afforded partial understanding of the corroding sandcastle life inevitably becomes. For Lazzarini, this is channeled into the “elusive”. He questions, “What makes these paintings [of Sharon] elusive? For me it’s in the refusal of vision. The pattern-image relationship that resists the viewer is what interests me.” Indeed, he also references a connection to the movements of minimal art, relating to a precision of singular gestures. When viewed in relation to what curator Lawrence Alloway deemed “Systemic Painting” (hard edge, geometric, and post-painterly abstraction), the methodical organization of form takes the forefront of meaning. Still, there is a competition of human recognition beneath the pattern: “These paintings reach out with a charge and a will of insistence to penetrate memory.” 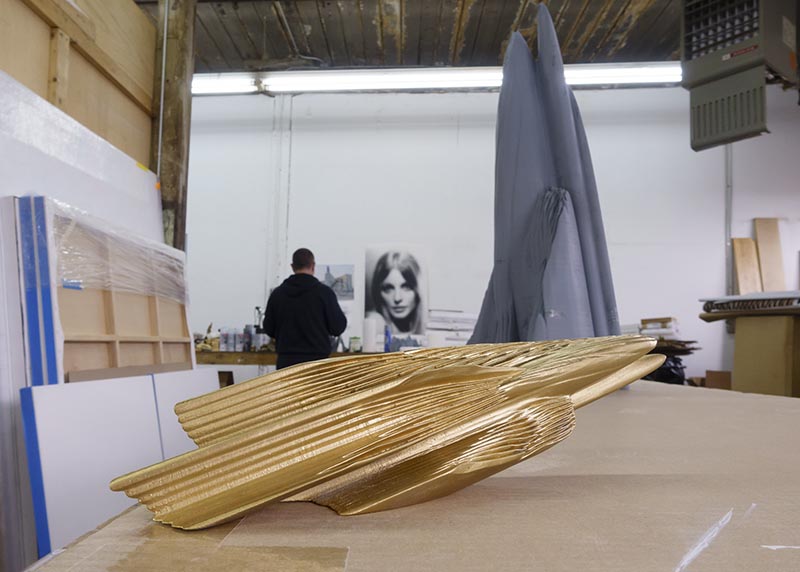 Another component to this body of work for the upcoming show ‘Deeper than Wide’ (a forensic term to describe stab wounds) is a series of sculptures based around elements of Hollywood Regency design. The two stars of the design movement spawned in the 1930s were Dorothy Draper and William Haines. Both well-to-do (though Billy had a falling out with studios when he refused a lavender marriage to save his acting career), the designers had influence over their glamorous neighbor’s decor. Soon, much of the lavish life was conducted amongst clashing patterns on carpets and walls, lacquered furniture, and imitation baroque elements such as ornate mirrors, candelabras, and chinoiserie, like vases festooned with flowers and birds. 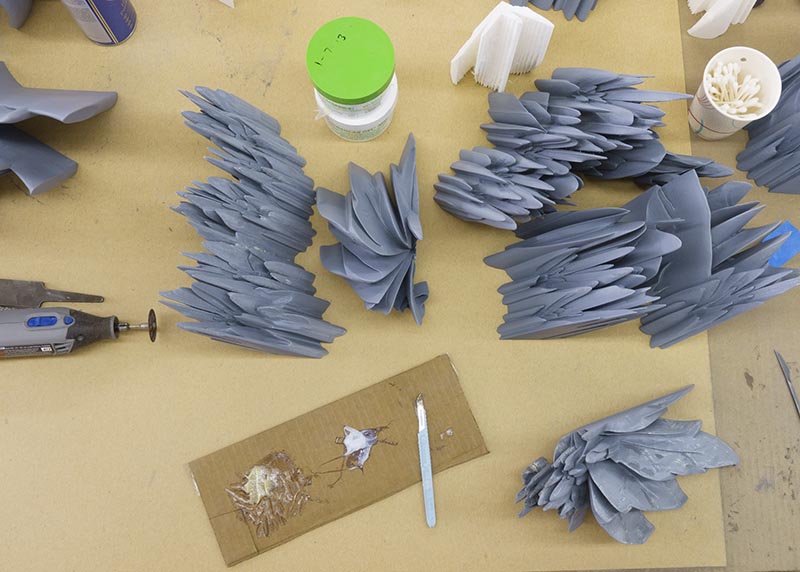 Lazzarini has chosen a few key elements of this prominent style, a dove and a flowering branch, to touch on some of the physical elements of Sharon Tate’s classic Hollywood existence. Flowers and birds generally thought to denote an air of innocence are here distorted along one axis to resemble sharp mountain peaks at close range. These objects are then coated in a gold tone to heighten a sense of superficiality. The result is an object that reaches from the wall, “occupying the position relegated to painting” to meet viewers as a violent abstraction. As time and memory changes original intent, these objects distort an understanding of what they were modelled after, until seen from afar where portraits recover their sweetness. 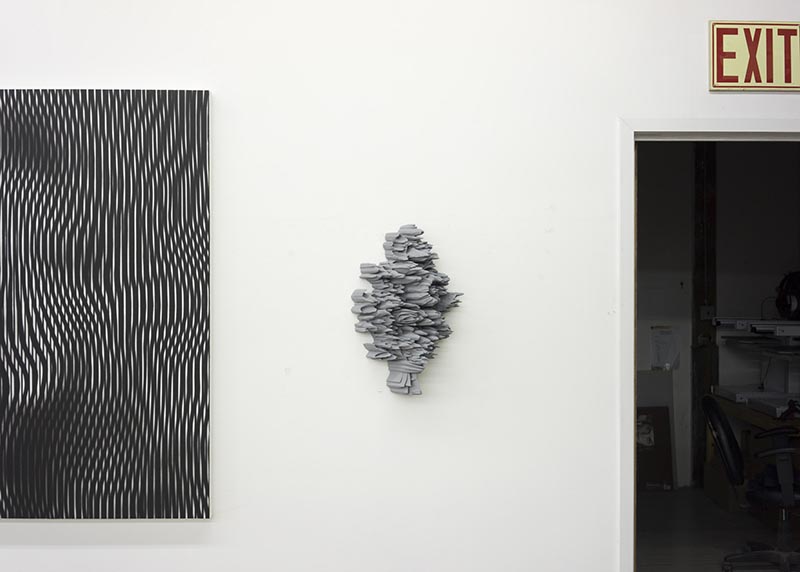