In her ‘Command: Print’ solo exhibition at NOME, Navine G. Khan-Dossos presents two meditations on contemporary aniconism. She has developed a striking approach to representing digital material through abstraction, employing her rich training in Islamic art as aesthetic and conceptual guidance. Her ‘Printer Paintings’ reinterpret analogue CMYK test sheets and the printer cartridge, resulting in a study of the colour printing tones. ‘Remaining and Expanding’ acts a physical pause pressed on difficult, unfiltered online content, sent through a self-styled process of transforming images into primary elements of shape and colour. In these selected pieces, Khan-Dossos explores the algorithmic nature of the internet and unfathomable digital material, reduced to more comprehensible states of the pre- and post-image. 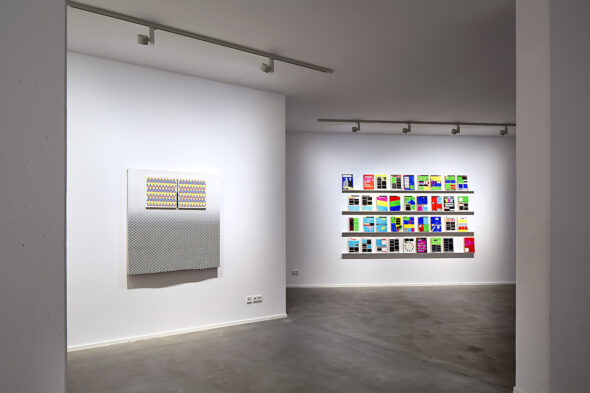 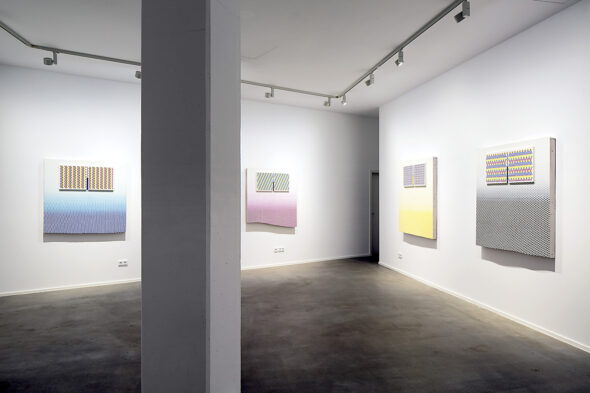 The conceptual depth of ‘Command: Print’ may at first be unrecognisable. In ‘Remaining and Expanding,’ thirty-six bright, non-figurative paintings, slightly larger than A4, rest against the wall on four narrow shelves. Simple block shapes are filled with loose strokes of gouache paint, in what Khan-Dossos labels as the ‘functional colours’ of CMYK and RGB. The series emerges from the artist’s research into the digital propaganda of ISIS. Her focus lies on the platform of their online magazine ‘Dabiq’, created to update a western audience on the group’s activity. As Dabiq exists only in PDF format, Khan-Dossos was struck by the layout of the publication: seemingly informed by graphic design rules and conventions, and arranged in anticipation of being put to print. For the artist, this physicality brought to mind the existence of a graphic and editorial team behind the publication. In ‘Remaining and Expanding,’ Khan-Dossos has imagined a wall of Dabiq’s editorial office, on which the now-discontinued magazine could be laid out before physical production. 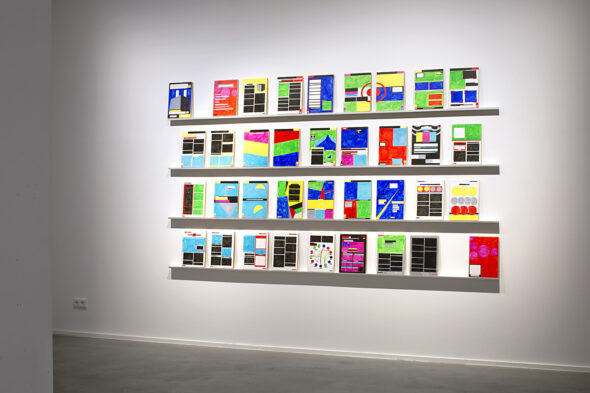 Khan-Dossos explains that her approach is not so much concerned with Dabiq’s content but the packaging. She dilutes propagandistic imagery and text into non-figurative graphic layouts, adopting the role of a visual translator. By bringing together the colour models RGB and CMYK, the artist finds a balance between the publication’s original digital format and its new existence in the physical realm. The objective reduction of photographs and video stills to geometric patterns imitates the precise moment blocks of colour flash as a web page loads: a ‘pre-image’ state acknowledging our awareness of the content that follows. 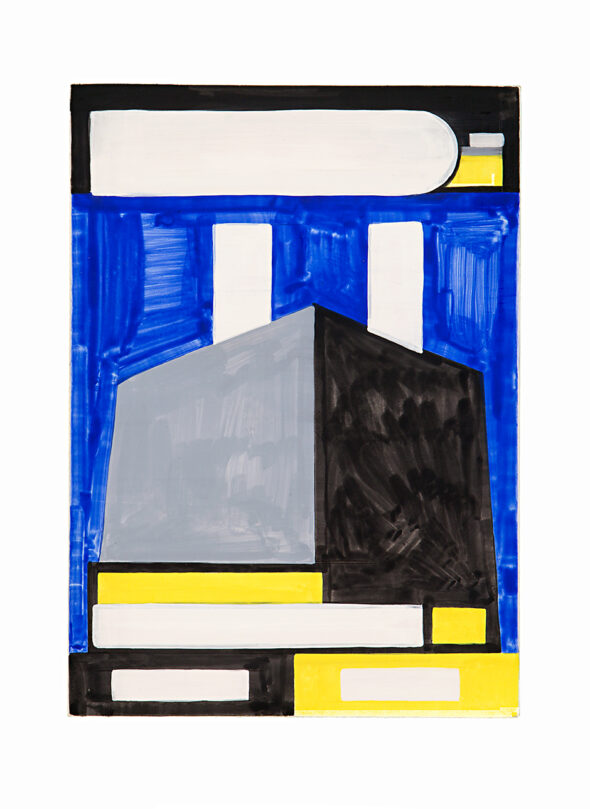 This is the artist’s way of breaking down the material to a visual level that allows for some form of comprehension, but she makes clear that her work does not elevate this militant propaganda through the medium of paint. Instead, Khan-Dossos notices and plays on the ‘mistakes’ in conventional magazine layout rules that Dabiq aims to imitate. (In a painting entitled ‘Strange Bedfellows’, the template of an infographic has been lifted from the Wall Street Journal.) This rough, imperfect approach to design and representation is mirrored by the artist in her thin and sketchy use of paint, applied in the time she estimated the design to have taken to complete. 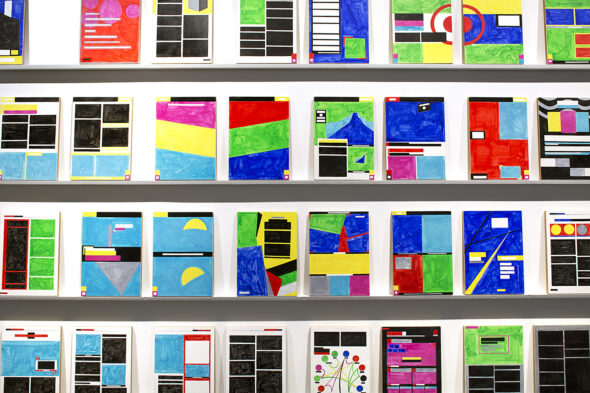 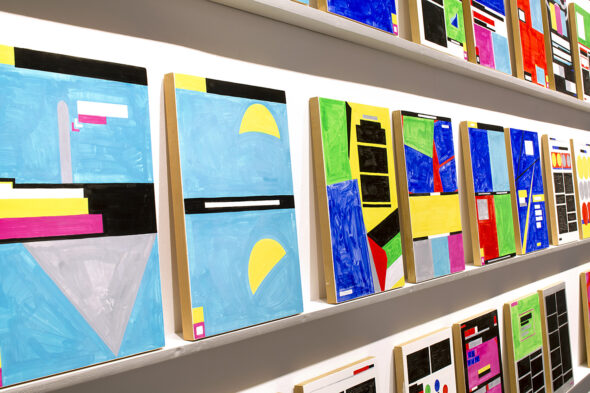 Khan-Dossos believes that these incongruities and imperfections allow a way in, for the publication to be unpicked. Her work, by extending the resonance of these qualities, remind us of the human hand behind propaganda, and the way information is being visually manipulated to increase impact for the desired audience. Through her own manipulation and displacement of visual material, the only explicit reference to content lies in the individual titles of the pieces. Alongside notices of recent executions and territorial targets, the titles allude to feel-good domestic stories and an education on the group’s infrastructure. Often, there can be a certain irony found in this: titles such as ‘A Window Into The Islamic State’ remind us that this is not what Khan-Dossos aims to offer. 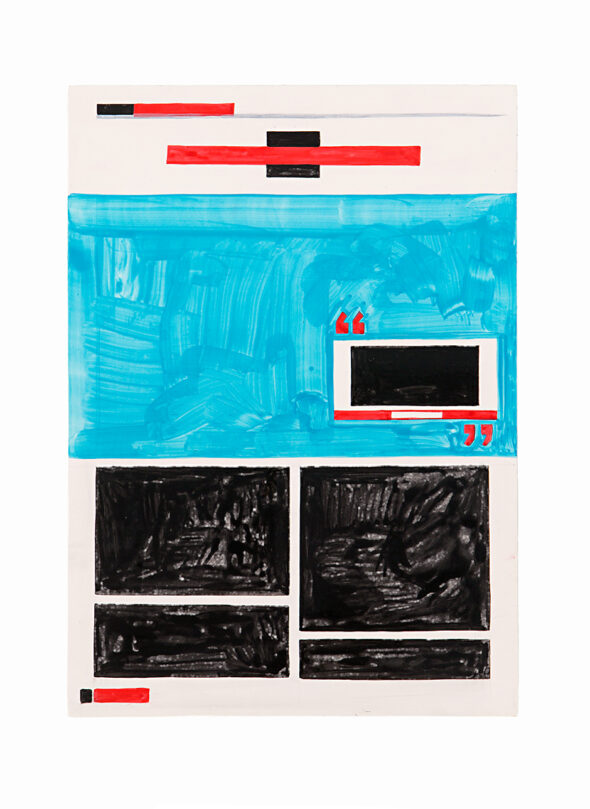 The artist informs us that she is aware of the ‘two-way mirror’ system on which the publication operates. Dabiq provides content that is crucial in forming an understanding of ISIS, but it couldn’t exist without this western interaction. Alongside a resemblance of Constructivist painting in forms now reduced to colour blocks, she suggests that the magazine both plays to and is influenced by its intended western audience. Through her extended transformation of the image, Khan-Dossos invites us to notice the mutual appropriation and reinterpretation of visual form. She continues the conversation between two sources of media, capturing curiosity in a subject that can feel very unknown, unravelling it into an easier state of tangibility.

Brit Seaton is a freelance writer from Leeds, UK, currently living and working in Berlin.