Day for Night is redefining the way in which festival-goers interact with and understand the disparate mediums of art and music. Internationally-recognized visual artists have come together with an outstanding musical line up to form an enriching and creative landscape, immersing the audience in the experience of light and sound.

The Houston-based festival is the brainchild of Free Press Houston and Work-Order, a New York-based design and branding studio, who have teamed up to co-found ‘Day for Night’. The idea is simple: enhance the festival experience by creating a new environment that encompasses music and digital art installations. The festival drew in a passionate music crowd from all over the world, but the audience was provided with much more than just the anticipated household names. They experienced a highly visual approach to performance. Interactive art is by no means anything new at festivals, but at ‘Day for Night’ it has moved beyond the realms of being a minor distraction to holding its own alongside the music.

The exhibited art installations conveyed the importance of sacred spaces in art, the power of symbology and opened up a heightened sensorial experience to the audience, allowing them to be saturated with the overlapping themes of space and time. Some of the highlights include SHOPLIFTER‘s ‘Ghostbeast’, which can be described as a living, breathing interactive sculpture that feeds on sounds, using hair for visual and artistic potential. ‘Day for Night’ marked the first time the artist had integrated projection into one of her large-scale, tactile installations.

Björk was undoubtedly the most sought-after artist of the show, with people queueing for hours to see the work. Her exhibition consisted of five digital music videos, each presented throughout five rooms and all experienced in virtual reality. She also performed two mesmerizing experimental DJ sets as part of the music festival program. Ezra Miller‘s ‘Stream’ wall piece is also worth mentioning. His live video feed combined visuals with a real-time generative animation of the main ‘Day For Night’ stage. The animation seemingly responded in synchronization to the performance on the stage next to it, creating a meditative visual mash-up.

The visual artists with their large scale projections and site-specific structures built visual experiences for the music- and art-lovers alike. Despite the segregation of having three of the four festival stages outside and the bulk of the installations themselves being inside, the festival did manage to bring together these two facets by creating intermediary spaces inside and outside where several of the art installations were exhibited. This strategic placement brought the artworks into the path of the commuting audiences, provoking moments for them to discover and explore immersive art environments, then continuing on to catch their favorite musicians’ sets.

We managed to catch up with Alex Czetwertynski, curator of ‘Day For Night”s art exhibition, and got his take on the festival. 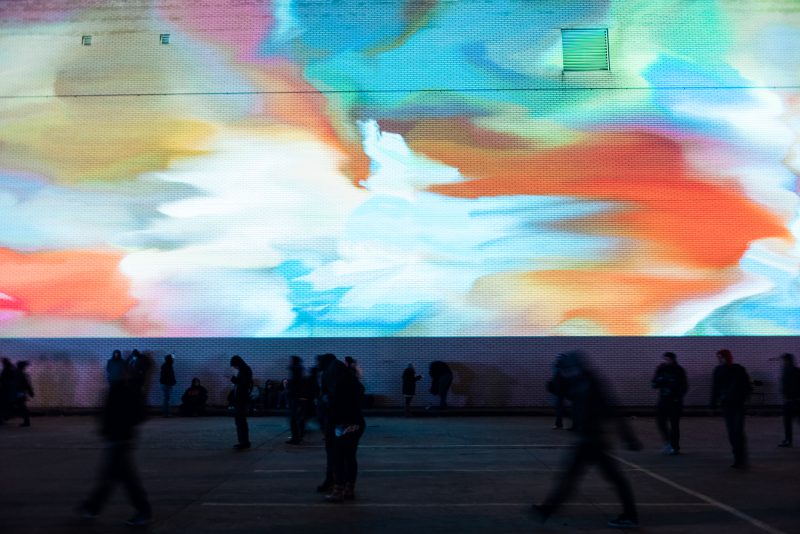 Alex Czetwertynski: Our previous venue, Silver Street Studios, was very interesting, but completely different. It was all about contrast between spaces. We had a pristine white wall, indoor gallery, a rundown warehouse, a large hangar space, and various other indoor and outdoor venues spread over a large campus.

We like the idea of changing venues. Taking over a space to create a music festival is a curious way of inhabiting spaces that are not designed for that, it offers plenty of interesting challenges.

The post office offered a more unified space, with a lot of opportunities to create a series of larger environments connected by installations. But one of the things that struck me the most about the venue was the post-war/brutalist aesthetic, that immediately created remnant thoughts of a different time. This was attractive because ‘Day for Night’ is focused on creating a new festival experience, the opposite of the generic open field with large stages and the random art work here and there. The post office is an environment that carries tons of history, as a “messaging center” for years, and when you walk in there you almost have the feeling of trespassing into a different world. That’s the kind of feeling that brings you out of your daily thought process and sets you up for a heightened experience.

LB: It’s an immersive music and art festival, bringing together digital art components with music and performance. What opportunities do you see with this format? Why did you decide to curate an art event at a music festival?

AC: When you go to a music festival, you are in an exploratory mindset. You are curious by default, and in most cases your curiosity is focused on music, but also on people, and the environment you are in. You are also committed to spending several hours in a venue.  All of this sets the audience up to be exposed to things that are best experienced in that hyper-sensitive state of mind. The second part of this equation is that music and digital visual arts are in the process of becoming more and more intertwined. A musical experience that is not accompanied by a visual component is extremely rare. So for us to integrate new media art, which typically involves a dialogue between different disciplines and techniques, made a lot of sense. 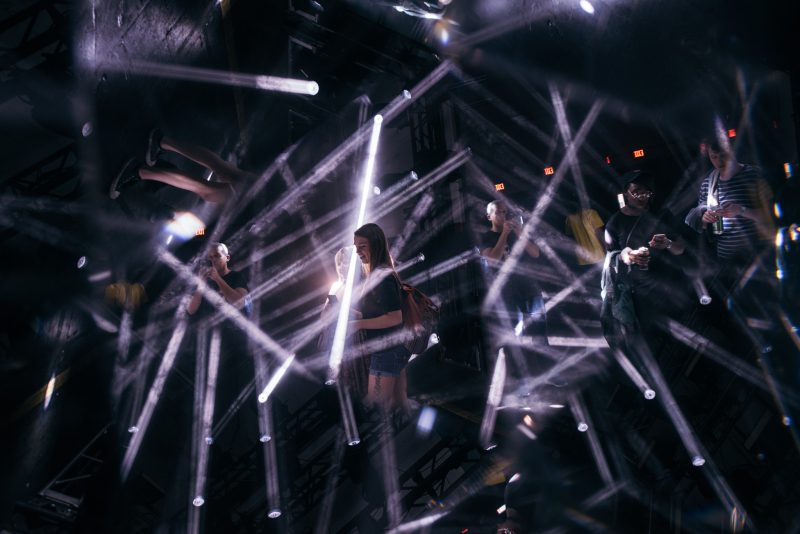 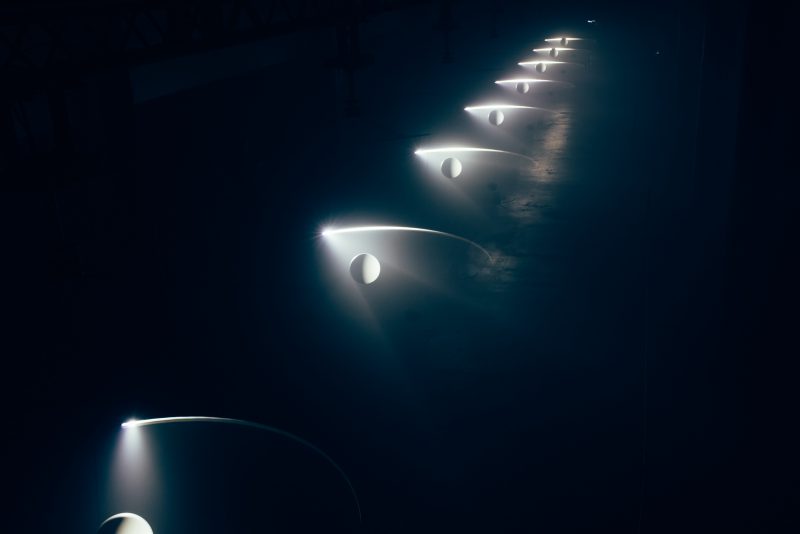 LB: The festival is creatively rich and explores light, space, sound and sensory experiences. What sort of challenges did you face when organizing this art exhibition for a crowd, who are essentially there for the music?

AC: We approach the curation of the visual arts differently in the context of a festival than we would in the context of an art exhibition. Because we are dealing with large crowds and working in large spaces, we engage with artists who can create works that function with that type of environment and viewership. A relationship with sound is another important element, anchoring the entire festival experience in an audio-visual dialogue is a key factor as we work towards more collaborations between artists and musicians.

LB: The 15 installations and commissions range from mirror and light installations to performances and sculpture inspired by NASA resonant frequencies. The artists vary greatly. What do they have in common that encouraged you to select them?

AC: I don’t think the artists vary that much. They may vary in terms of their visual language and materials, but they all deal with technology, light, the moving image, computation and interactivity. They all have a strong mastery of their craft and aesthetic, and create very unique pieces, but all using a dialogue between controlled light, space and sound. They all create installations, which are typically experiences that demand a particular presence of the audience, and that really come to life when people experience them together. There is very little representational work, most is suggestive and interpretive, evoking rather than describing or overtly suggesting.

There is a lot of new media art being produced out there, but there are only few artists whose work goes beyond an exploration of specific technologies. A lot of artists can easily fall in the trap of what the ‘Critical Engineer Manifesto’ calls ‘The Awe of Implementation’, i.e. creating something because it poses an interesting technical challenge, but ends up being mostly eye candy. At ‘Day for Night’ the arts are deeply anchored in the media and tools of our time, but not just for their own sake, they all offer a commentary—or plant seeds—for us to engage with our epoch. 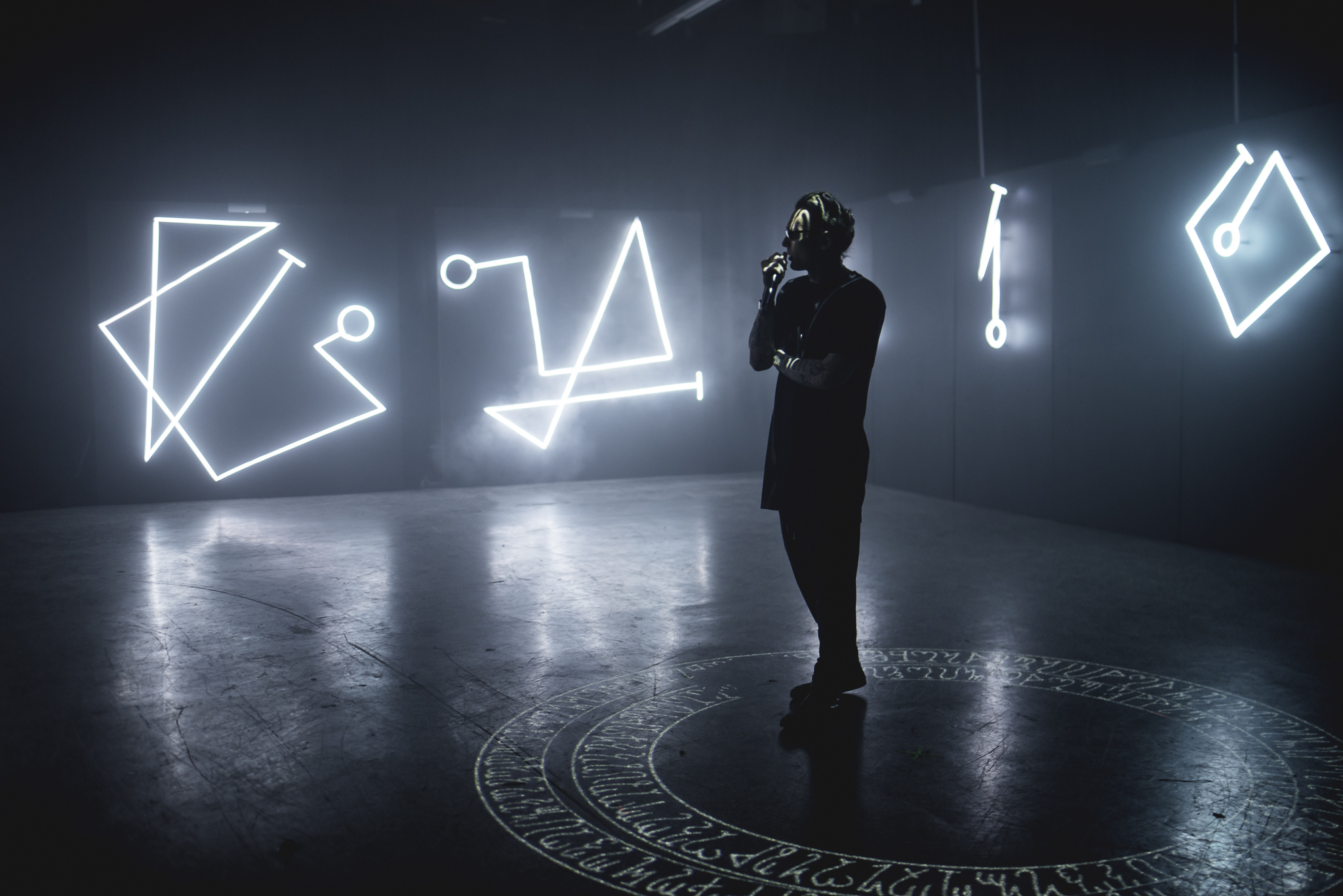 LB: You worked directly with Damien Echols on his ‘Crimson Lotus’ piece. He used painful concepts, that were used to keep himself sane while in prison, and displayed them as symbols. How does the power of symbols create sacred space within the setting of a music festival?

AC: This goes back to what I was saying earlier about people being extremely receptive in a festival context. They could step into this installation and really make up their minds about what it was.

Bringing a concept like ‘Crimson Lotus’ to ‘Day for Night’ was a bit risky because of how easily its language could have been misinterpreted, but the strategy was, on one side, to make it highly personal by having Damien be there, sharing his experience, and conversely highly detached from an emotional medium like painting. So, people could easily connect to the spiritual and emotional side of the installation, and simultaneously observe the beauty of the signs with detachment. To me the success of that piece was in that dialogue.

LB: Aphex Twin is one of the headlining musicians who often uses visuals as part of his performance. He hasn’t played at a festival for the past 8 years, why do you think he chose ‘Day for Night’ as his comeback?

AC: I think to get Aphex Twin interested in performing he needed a different kind of setting, something that spoke to his strong approach to music as an auditory and visual experience. ‘Day for Night’ created the perfect context for that: an unusual venue that wasn’t billed as a generic music festival and that is committed to creating arresting environments as much as it is to engaging the most eclectic and interesting musical lineup. 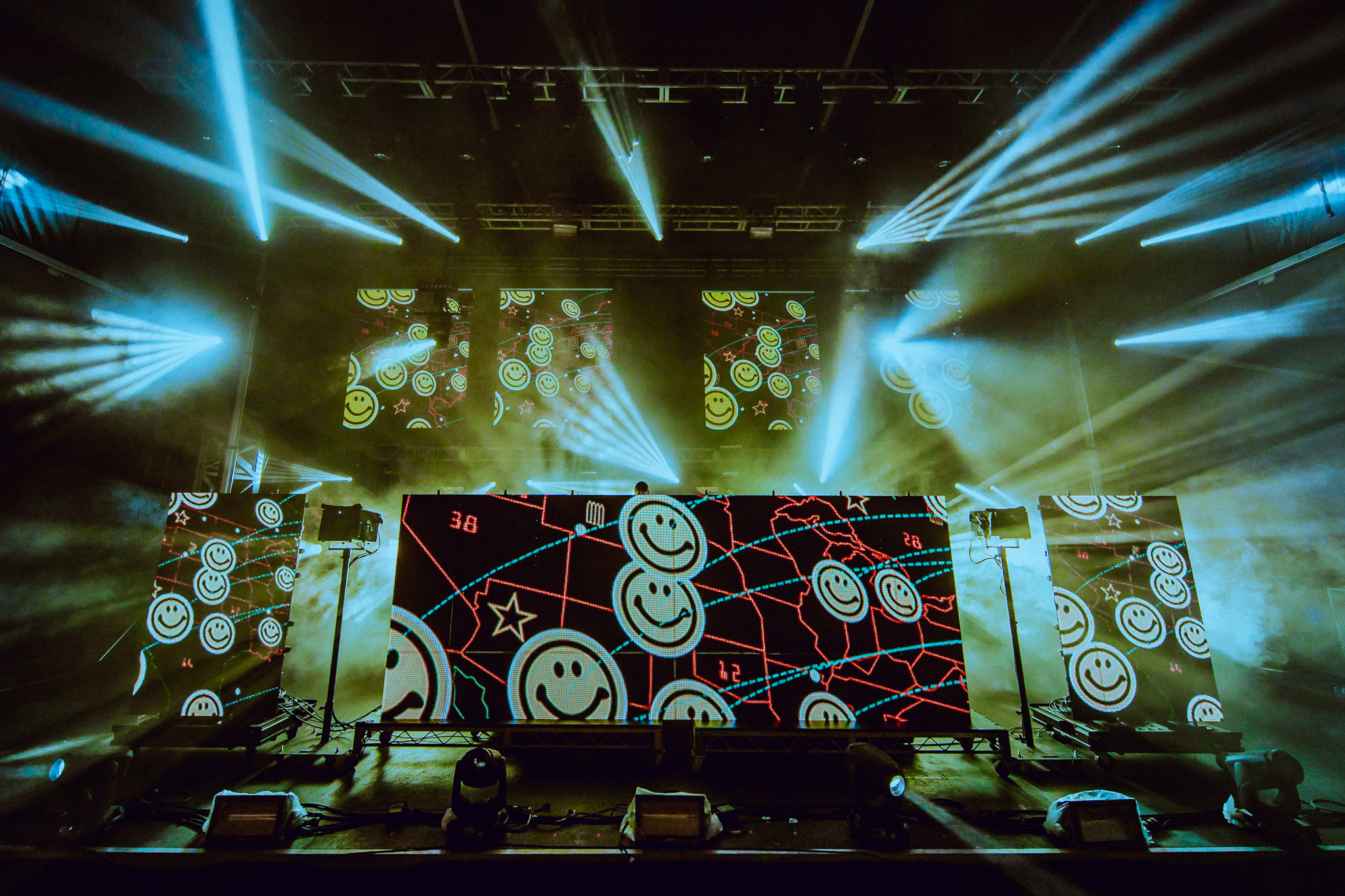