The history of computation in art is long and varied, continuously shifting to meet the latest update’s minimum requirements. Artists and curators go on about algorithms and their impact on society, but what are algorithms, actually? For the sake of clarity, we can break them down into three simple parts: input, output, and something that happens in between. Depending on the algorithm, what happens between input and output can range in visibility from transparent (e.g. open source) to opaque (e.g. proprietary code). At the opaque end of the spectrum lies the black-box algorithm, in which the entire process between input and output remains intentionally obscure to the user. 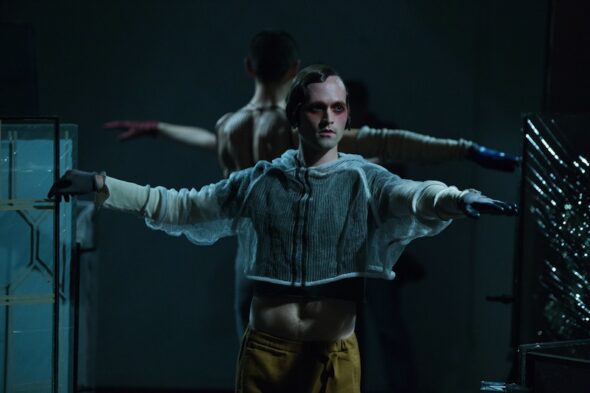 What do black-box algorithms have to do with contemporary performance art? Broadly, we can understand any scripted performance as a black box. Performers (the input) interpret a script unknown to the viewer (the black box), and the resulting performance (the output) becomes an expression of some opaque logic. For ‘Shade’, a performance installation conceptualized and choreographed by Tarren Johnson and Mira O’Brien, the black box serves moreover as a generative component of the performance itself. Rather than merely thematizing the increasingly pervasive role algorithms play in our daily lives, Johnson and O’Brien actually incorporate active computational processes into the performance’s script. The artists present their own black box in a black box—an opaque, generative script played out inside a black box theater—that reorganizes bodies and objects, provoking real-time incongruities between virtual and physical space in moments of rupture.

Entering the theater, viewers are confronted with a minimalist, immersive environment. Lines of tape on the black-painted floor form an abstract spatial plan, which gives way to a series of architectural fragments, sculptures reminiscent of O’Brien’s three-dimensional works. The sculptures, which act mainly as partitions, primarily consist of discarded window panes, each with unique proportions and patina, propped up on lightweight scaffolding (wooden braces attached with metal clamps). Three dancers—Winston Chmielinski, John Snyder, and Johnson herself—inhabit the installation and, in the first of three vignettes, perform a series of movements that refer to non-places, like airport security checkpoints and shopping malls. Their costumes by fashion designer Alicja Sowiar stand in stark contrast to the blighted windowpanes delineating the space, while at the same time they more delicately express, through inevitable deterioration, the same fragility apparent in the dilapidated scenery. 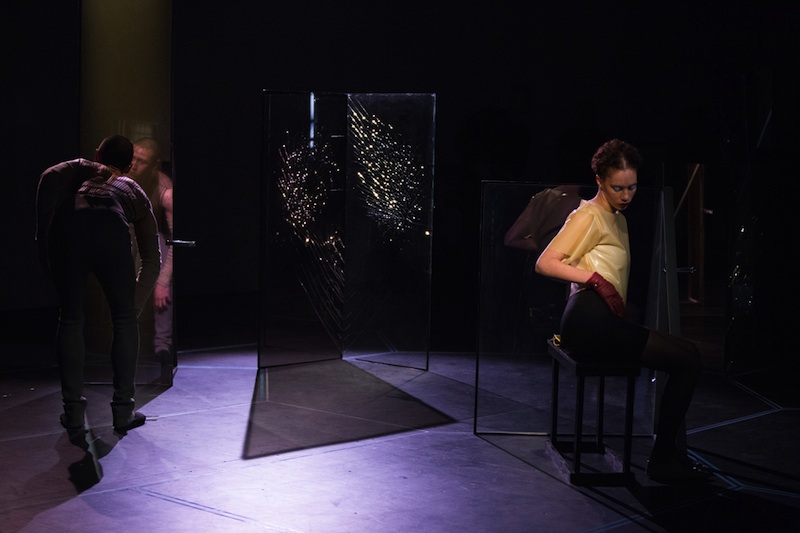 The soundtrack shifts into audio generated on the fly by a computational process — ‘Shade’’s black box algorithm, composed by Joel Cocks. The soundtrack functions as a one-way interface for the algorithm, which does not perceive the space nor the dancers within it, but only issues its commands, each expressed aurally as a singing human voice. Labor is divided: two dancers assume the role of spatial manipulators, picking up and relocating sculptures on command from the algorithm, while the solo dancer follows spatial cues, responding to the ongoing spatial transformations. In ‘Shade’, the black box triggers samples from a library of digital recordings: jingles correspond to the individual sculptures, and tones correspond to the delineated areas on the floor. There is no narrative between the dancers moving the sculptures around and the solo dancer moving about, except for the one that unfolds for the viewers when the algorithm makes impossible commands of the dancers, creating moments of failure, fleeting aberrations.

A second vignette commences when the dancers suddenly break out into unamplified song, evoking the atmosphere of a surreal teen opera. Singing Elisabeth Wood’s desaturated and deconstructed arrangement of Tiffany’s 1987 hit cover ‘I Think We’re Alone Now’, the reference to non-spaces becomes clearer: Tiffany was famous among suburban youth for her shopping mall appearances. By singing, the dancers are momentarily exposed as human beings with their own voices, blinded by some unclear illusion of privacy. They go from swallowing the voice of the imperceptive algorithm to exclaiming it themselves. Subsequently, another self-similar algorithmic section commences, followed by the final vignette. The dancers play out various social interactions in a hall of mirrors before finally stepping through a door-sculpture, symbolizing their passage to the outside world. 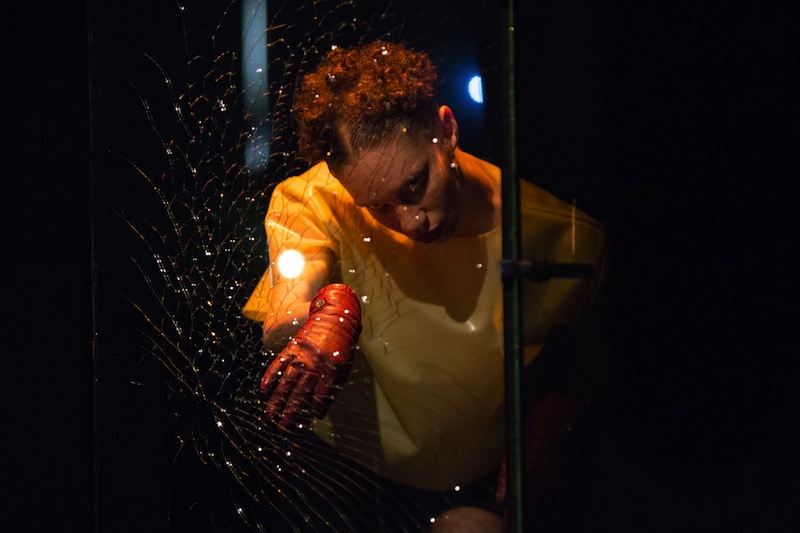 During the second performance of ‘Shade’ at Tanztage Berlin, something remarkable happened in the second algorithmic section: a pane of glass fell down with an overwhelmingly loud crash, ending its maneuver in a draped position over the installation’s bench. It was an electrifying moment that raised the question: was the crash intentional? And this is crucial, because in the algorithmic sections intent itself is being questioned by Johnson and O’Brien. The black box gives commands outside the performers’ control, but of course within the execution of those commands there is an element of discretion. It becomes impossible to discern if the crash was the result of built-in human error or simply the performers’ inability to carry out the generative commands in physical space. If the algorithm cannot know that skin is soft and glass is sharp, can it be malicious in creating the circumstances under which that violent incident occurred? Did the choreographers intentionally accelerate the speed of the cues to push the dancers to the brink, to provoke that failure vis-à-vis human error?

‘Shade’ exhibits what Anke Hennig has called “surplus alienation”, a sort of intentional estrangement or alienation from everyday life that actually brings us closer to it. Viewers of the artwork are alienated by the unintelligibility of the performers’ movements, from the underlying script that determines their movements. But at the same time, viewers are drawn in, brought closer to the performers and to the obscure logic of their movement by way of an ultimately human tendency to search for patterns in chaos. By anthropomorphizing their black-box algorithm, Johnson and O’Brien made visible an opaque process similar to the ones that drive so many of our daily inter-actions — processes with real consequences. Furthermore, the artists have exposed through palpable moments of failure — clear signals amongst the noise — the impossibility of complete reconciliation between the human body and the non-human algorithm that governs it. 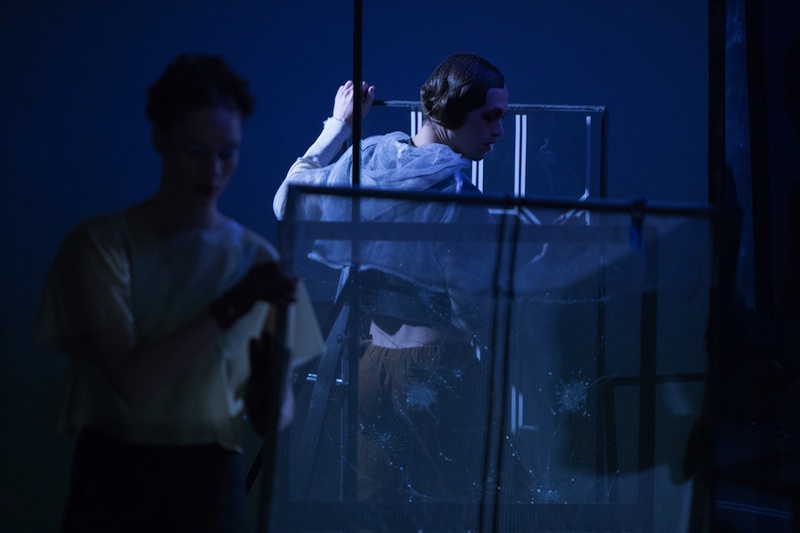