The concept of virtual reality must be approached with care in the work of Cécile B. Evans. For the Belgian-American artist, it would seem that the two terms are contradictory: Evans expresses that she does not believe in the ‘virtual’, as a term mistakenly used to suggest that something is not real. In her solo exhibition ‘Sprung a Leak’, a three-act play installed and running on a loop at Tate Liverpool, Evans provides a physical space of intertwined human and artificial intelligence. A sculptural network of glossy screens communicates with robot performers, alluding to extended states of collaboration through/with technology: a possibility rooted in reality through wires and our own active, online participation. 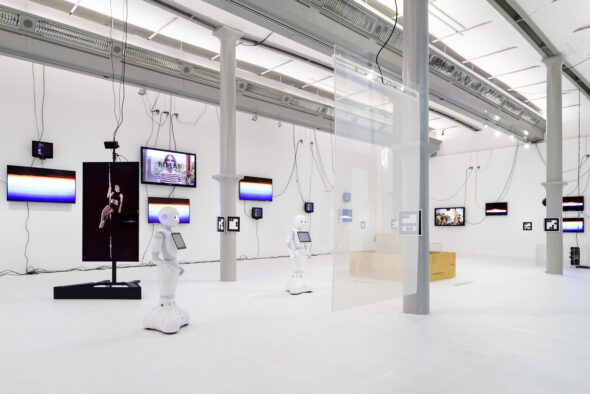 It is becoming increasingly crucial to recognise the virtual realm as reality. In the catalogue published for the 2015 exhibition ‘Rare Earth’, curator Nadim Samman discusses futurist Raymond Kurzweil’s proposal: “the idea of perfection as the merging of man and machine on an untethered plane of existence.” Samman lays it out straight: “we shoot video from hobby drones and real people from military ones, always acting at a perceived distance—Zeus issuing thunderbolts from the Cloud.” In ‘Sprung a Leak’, Evans furthers this understanding of man-machine collaboration, challenging our perception of actions and language, both characterised and made possible by digitalisation. 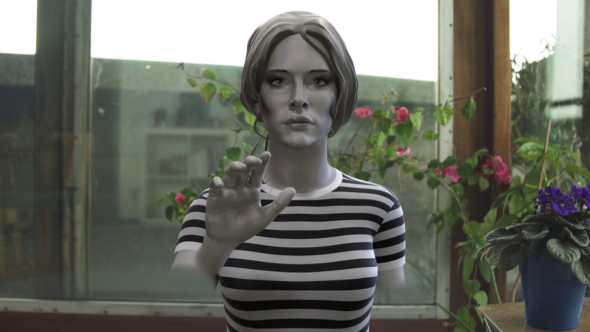 Cécile B. Evans: ‘Sprung a Leak’ (still of ‘Liberty’), 2016 // Image courtesy of the artist and Galerie Emanuel Layr, Vienna

Throughout the play, Evans presents three ‘Users’ (appearing as pole dancers on individual portrait-oriented screens) interacting with humanoid and canine robots. The robots navigate the clustered screens and a fountain sculpture, communicating with the other performers through a singular voice belonging to Evans, capturing online anonymity and altered identity. The narrative is loosely driven by a quest to follow the whereabouts and wellbeing of the performers’ beloved beauty blogger ‘Liberty’, appearing in CGI form and later symbolised through Delacroix’s ‘Liberty Leading the People’. Evans’ use of such emblematic imagery reminds the viewer that ‘Sprung a Leak’ is embedded in an entity immeasurable against the tangible confinements of the gallery space.

Because of this, the exhibition seems to be tainted with a slight over-ambition. Although this may be a conscious device of introspection for the play’s microcosm (where much is left to the imagination), our own limitations are brought to attention. Far more exists than is perceivable to the human eye. Evans acknowledges such limitations with optimism, offering that they “create openings to imagine new possibilities and re-address old questions from an unstable but unique position.” 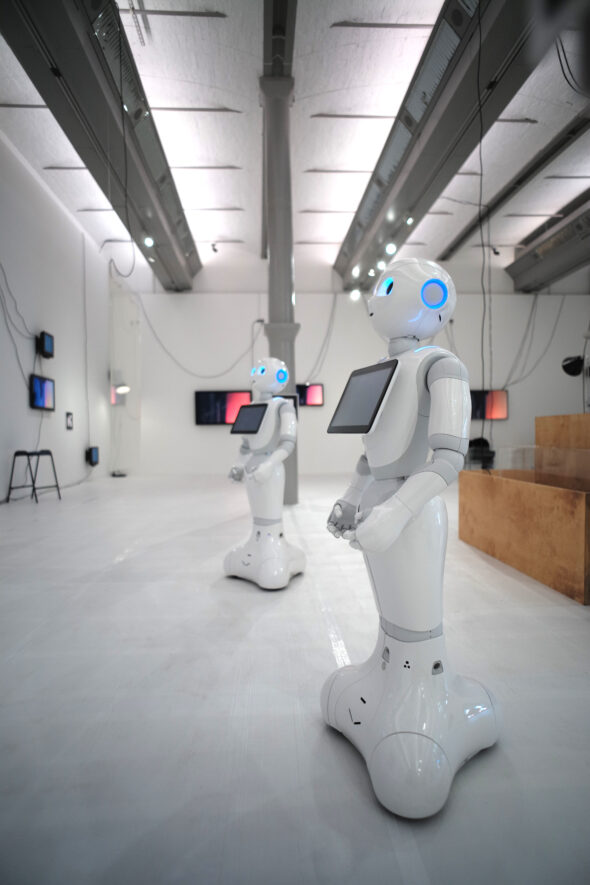 As the narrative develops, ‘Sprung a Leak’ presents a series of spatial tensions and temporal ambiguities: the characters speak of memory, attacks and leaks—terms that adopt shifted meanings in their extended context of the digital. The three acts loop and reset, the ‘Users’ twist around their poles and the screens flash between original and found footage. Through this, Evans creates a climate of broken circuits and information leaks. The environment formulated in ‘Sprung a Leak’ requires the viewer to be mindful of its spatial duality (or dual-reality), and we appropriate the role of the online voyeur. This enables a point of view synced with the ‘User’: as the characters express love and concern for Liberty, we become reminded of our own emotive responses to digital material.

The near-seamless relationship between humanity and technology in ‘Sprung a Leak’ captures Evans’ confidence in the potential of this multi-dimensional collaboration. A focus on sharing and responding in the digital realm holds an important role in her practice: Evans keeps an online Notes page tied to her site—a Google Doc open for personal and public use, encouraging the discussion of projects among general musings. In ‘Sprung a Leak’, this communication plays out before us like a lucid dream, revealing our own input and uploads to have formed a mirror: a new reality that imitates and extends how we think, act and feel. 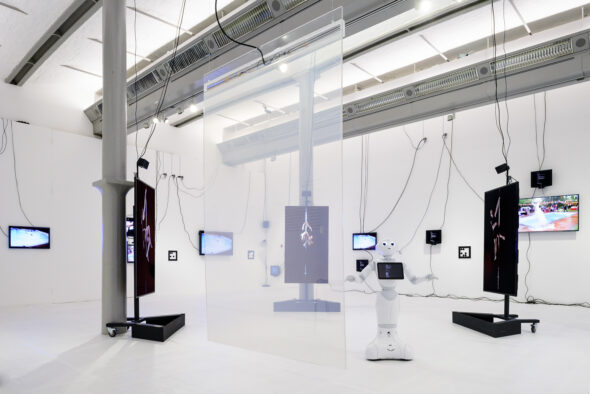