‘Through You’ is an experimental project, recently premiered at Sundance Film Festival, in which the virtual collides with the real. Filmmaker and dancer Lily Baldwin teamed up with writer and director Saschka Unseld to create a visual piece in which viewers move beyond the role of spectator to become active participants in a digital space. 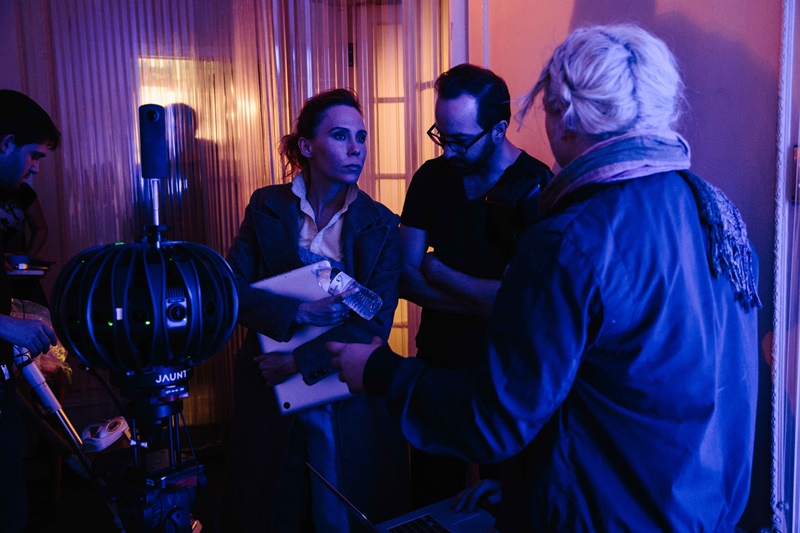 Lily Baldwin and Saschka Unseld: ‘Through You’ BTS, 2016 // Photos by Cameron Berton and Dagmar Weaver-Madsen, courtesy of the Directors

Conceived during the Sundance Institute Jaunt VR Residency, the film follows a young Julia in her quest for love. Completed over the course of six months, the residency oversaw the pair utilising alternative practices within filmmaking, such as a 360 degree camera set-up. Combining movement and film, both Baldwin and Unseld collaboratively learnt about the possibilities and limits of virtual reality. In the portrayal of an intimate love narrative, dance becomes an incredibly powerful communicative tool. Through muted tones and the diminished responsibility of dialogue, ‘Through You’ is a leading example of virtual media.

With the recent premiere garnering positive reviews, we managed to catch up with Lily Baldwin and Saschka Unseld to discuss the film and the future of VR cinema.

Candice Nembhard: ‘Through you’ is not the first time the two of you have worked together. In previous projects you have complimented visions of filmmaking with the possibilities of dance. How easily does the pairing work and what compromises did you make in order to achieve what you did?

Saschka Unseld: We’re very similar [but] also very different. We both have a very clear opinion on what we like and what we don’t. But the process of how we achieve these things is quite opposite. In a way this ying-yang approach made our collaboration perfect. Both of us were able to judge each other’s work from a distance and help each other focus on our strengths.

Lily Baldwin: I think of us as the perfect collision. I love collaboration: bouncing off of strong opinions. Co-direction is hard and I’ve often avoided it because I haven’t found a balance of rigor in process. Saschka is my rigorous match. When we first met over coffee, I knew by the way he assessed the cup (an attention-to-detail with unerring POV), that we would have something to talk about. This quality laid the ground for me to trust and lean into his voice. Throughout our process I found myself doing things I’ve never done. Saschka protected my naivety in the virtual space and supported me to entertain my full imagination. I absolutely said yes to aesthetic choices that I didn’t always agree with, but I was more interested in learning [or] stepping outside my comfort zone than I was in adhering to what I thought was right. This was the premise of ‘Through You’.

CN: The film follows Julia and her lover’s life into a world of burning passion and great loss. Ranging from the the past to the future, viewers are faced with specific moments that feel like an eternity. Why did you decide to use ‘love’ as a central theme to best illustrate or depict the possibilities of VR media?

SU: Our central image that we wanted to convey was the feeling of a memory of a lost love that we carry with us all our lives. VR enabled us to experience Julia’s life through that memory’s “eyes”. Because being disembodied and ever-present is something that only VR can offer.

LB: Embarking on my first VR project, I felt strongly that something should be made that couldn’t exist in any other medium. VR innately proposes a sense of culpability and intimacy by putting the viewer inside of something happening around them. Having been a dancer for many years, my lens is body and feeling, and I have always wanted to wake people up to their body. Love is our theme [and] its opposite, loss, epitomizes this. ‘Through You’ is about peak moments of being through hi-velocity experience that doesn’t shy from fear or from tenderness.

CN: To physically create this film, you almost had to become invisible. The 360-degree filming meant scenes of you directing and navigating the space had to be visually absent. In your absence, how easy was it to direct and what impact was made upon the cast and crew?

SU: We actually weren’t absent. We just tricked you. All our sets have black floors and Lily, Dagmar (our DP), and I wore full body black suits that made us invisible against that black floor. It also made us look very silly on set.

LB: It was surreal, slithering around on the ground. We did 10-30 minute takes, where I’d lead the performers (Joanna Kotze, Amari Cheatom and Marni Wood) through an experience while Saschka and Dagmar moved the camera. The three of us would whisper back and forth about the camera and body direction we felt was needed. Essentially we were all on a stage together creating “a happening” with the idea of capturing authenticity as paramount. This project involved a huge team and, working in VR, more than ever, it was about making sure we were on the same page. Our producers Shruti Ganguly and Elliott Whitton were amazing at jumping off of this cliff together with us and we all developed new ways of working.

CN: You’ve arguably constructed a film that echoes a dream. Through editing, you wanted to create “peak moments of being”. In that light, how difficult is it to connect these moments and do you think virtual reality technology encourages interest in dreams and alternative worlds?

SU: I think the reason why we keep referring to the word “dreams” is not because VR feels like a dream but because VR narrative works in the way our thoughts work when disconnected from the conservatism of reality. And the closest to this that we have known of so far are our dreams.

LB: I think the flatty world has squished our perception of time into a line. Virtual space allows for a unique truism that is more like everyday. In everyday reality, time exists in layers with things and stories happening simultaneously. Even though people recount “normal life” in a straight line (“this and then this and then that happened…”) I find time is way more fluid. People often associate this with dreaming. Virtual reality is an expanded version of “real” (not “sur-real”, not “hyper-real” but “virtual-real”, which still needs to be understood). 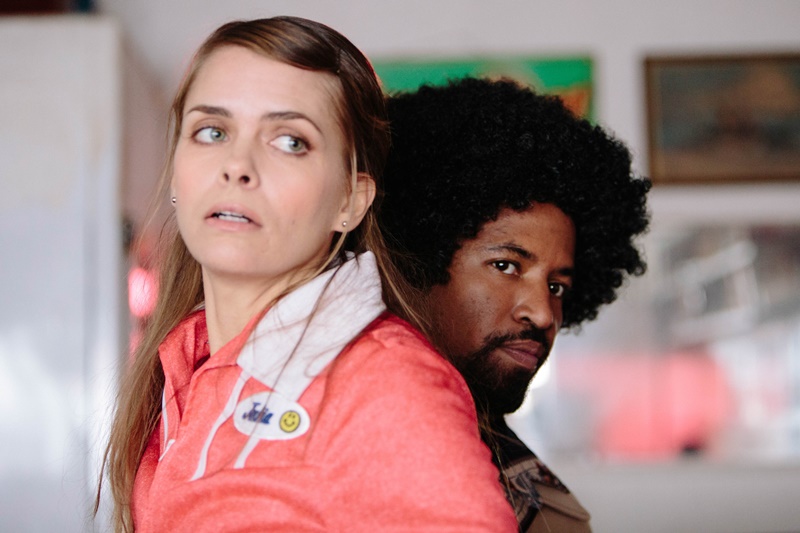 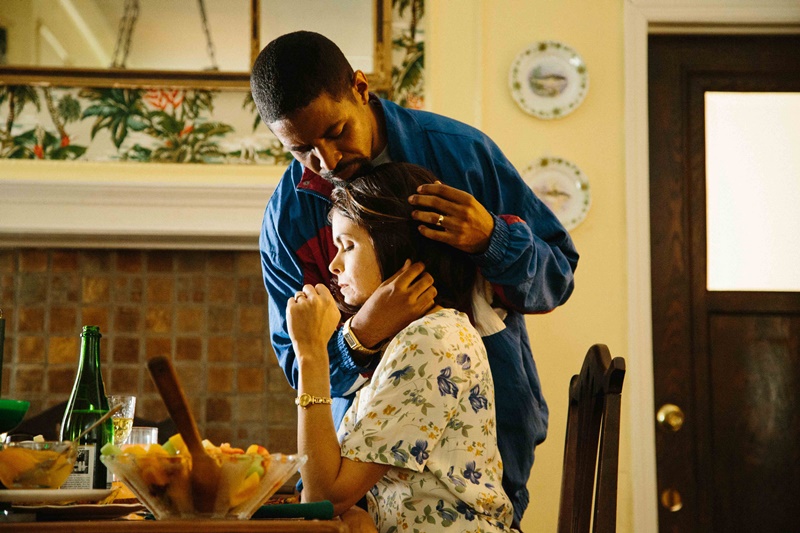 Joanna Kotze and Amari Cheatom appear in Through You by Saschka Unseld and Lily Baldwin, an official selection of the New Frontier VR Experiences program at the 2017 Sundance Film Festival // Photo by Cameron Berton, Courtesy of Sundance Institute

CN: Lily, what has this project taught you about filmmaking, and Saschka, how do you think ‘Through You’ has impacted your understanding of dance and movement?

SU: Lily’s perception of the expression of emotions through bodies in space and her dance approach to editing through the idea of texture and visceral experience will forever influence the way I work and think. Learning different ways of thinking and seeing the world is why I am in love with the process of collaborations.

LB: This project hasn’t taught me anything about filmmaking, it has taught me how to speak with a viewer in a different way. Working in VR has also returned me to my performing roots. Many times during this process I drew upon my experience performing in-the-round. I am most at home in the minutia of a transition and Saschka has taught me about seeing overall structure earlier on in the process than I’m used to.

CN: What does the future look like for virtual media beyond creative industries into our own personal lives?

SU: I think VR will usher in a massive renaissance of the arts through how approachable and visceral it can make our experience of artistic expression.

LB: VR can return us to ourselves. It is the opposite of avoidance and escapism. In our current polarizing world, climate counter-culture is being born. VR is a bold tool.

CN: ‘Through You’ has just been premiered at Sundance Film Festival’s, as part of the “New Frontier” programme. What are your thoughts about the transition of the film from a private project to a publicly-viewed film?

SU: I love both, the public and the private. We make sure, though, to give our work an installation component whenever exhibited publicly as a physical presence and the threshold of stepping into another world needs to always be part of the stories we tell, to make them as powerful as they need to be.

LB: Nothing is ever done! And it is a relief to give this project away. This project was about starting a conversation. We want people to reconsider what’s possible in this space, and for each viewer to experience their own narrative. It is the first of many dance collaborations between us.