The crowds in and around the Santa Monica Airport’s Barker Hangar were plentiful, as Thursday, January 26th marked the opening day of Art Los Angeles Contemporary’s weekend-long Art Fair. In its eighth year, Art Los Angeles Contemporary positions itself as the “International Contemporary Art Fair of the West Coast”. While Los Angeles-based galleries inhabited the majority of booths in Barker Hangar, there was an undeniable, strong international presence from galleries spanning North and South America, Asia and Europe. 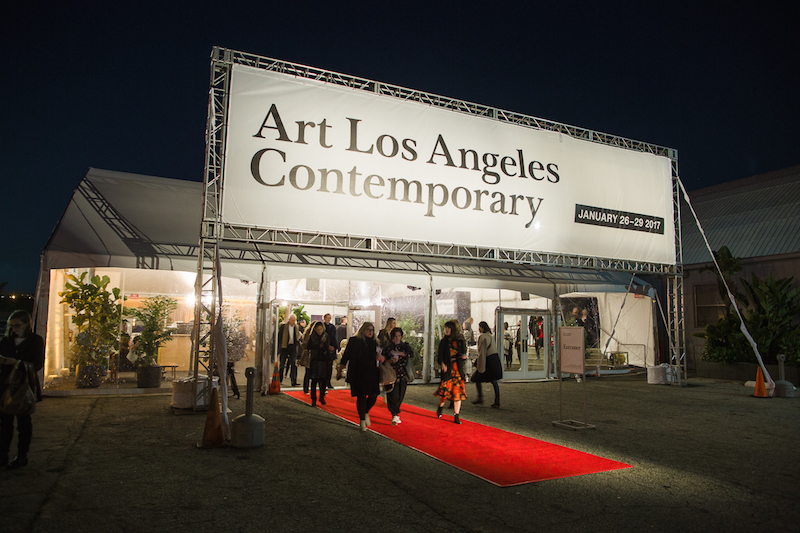 An impressive emphasis on painting and sculpture often manifested itself in works that blended both elements of these media together, while the presence of photography and digital media were less pronounced. In addition, ALAC incorporated the second installation of their ‘Freeways’ section, like last year: a portion to the hangar’s north was reserved for local and international up-and-coming galleries that featured solo or two person projects. 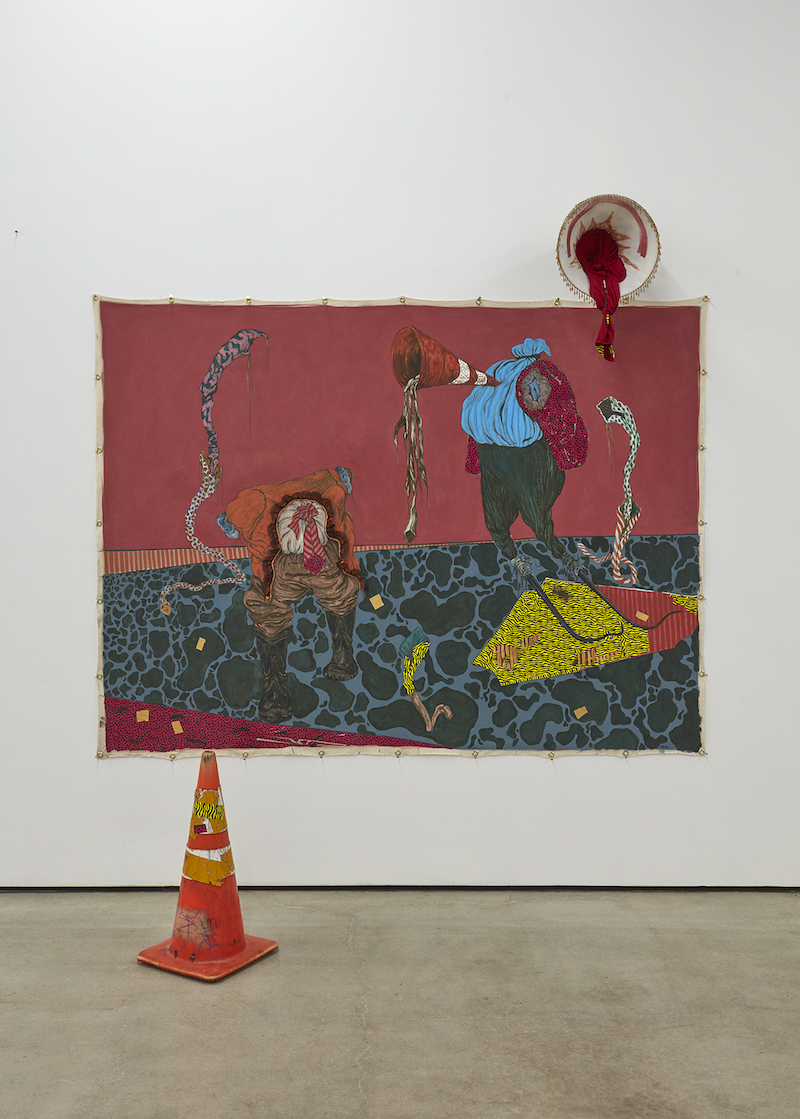 Simphiwe Ndzube’s work at Nicodim Gallery (Los Angeles, Bucharest) encapsulated this blurring of painting and sculpture. In ‘Torchbearers’ (2016), rich hues of brick red, baby blue and an arresting zig-zag of yellow and black were coated onto a canvas tarp. Two figures, bulbous in physique and propped up like scarecrows, stood in a surreal landscape populated with tattered suit ties that appeared to sprout up from the ground like flowers or vines. The figures, whose heads were absent, were denied recognition or identity. In an interview with Jessica Hunkin of the South African online publication Between 10and5, Ndzube attributes much of his work’s inspiration to the theme of migration. Like his Cape Town show ‘Becoming’ (2016), where figures’ heads or faces were either obscured or completely absent, ‘Torchbearers’ continues this motif and alludes to the isolation and lack of identity that migration can exude. The orange traffic cone and lamp shade, both items independent from the canvas, are a testament to Ndzube’s fondness for found objects and ability to merge sculptural components with painting. 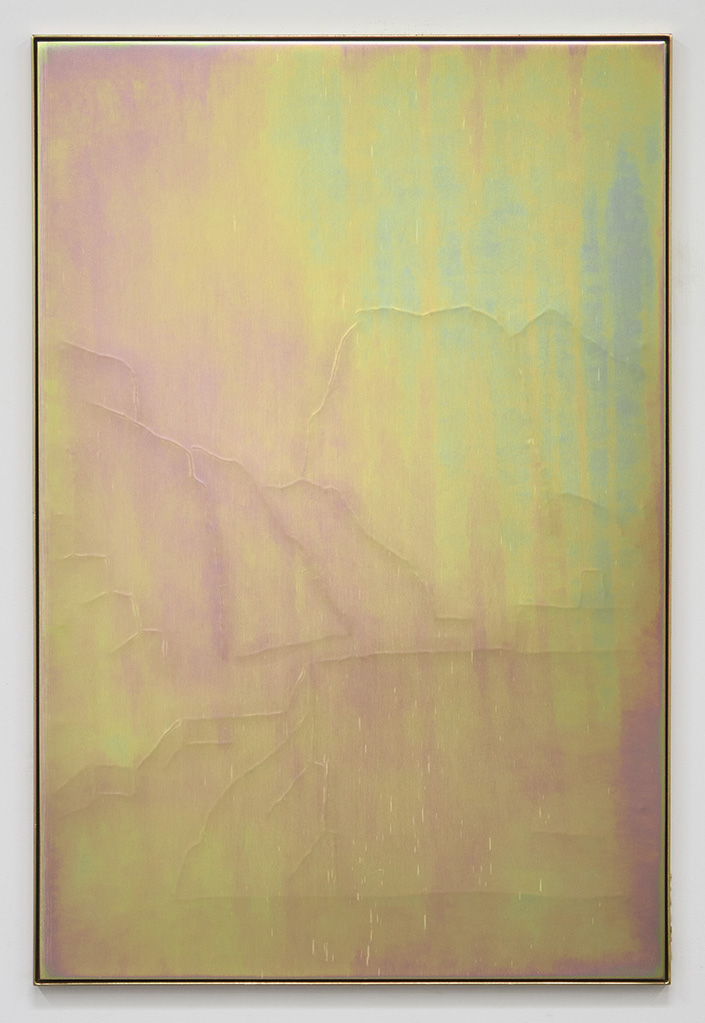 Ibid Gallery, with outposts in London and Los Angeles, exhibited striking works by artists Thomas Linder and James Herman. However, it was Devin Farrand’s work, ‘Carrara Landscape 5’ (2017), that was most transfixing. A large slab of yellow zinc-plated steel, this piece changed colors from shades of pink, to purple, gold, and even a hint of green depending from where it was viewed. Because ‘Carrara Landscape 5’ shifted shades due to the reflection from the exhibition’s lights above, the material mimicked a large two-dimensional hologram. The piece’s material suggested it was a monolithic minimalist sculpture, but it was bound nonetheless in a frame, like a painting. 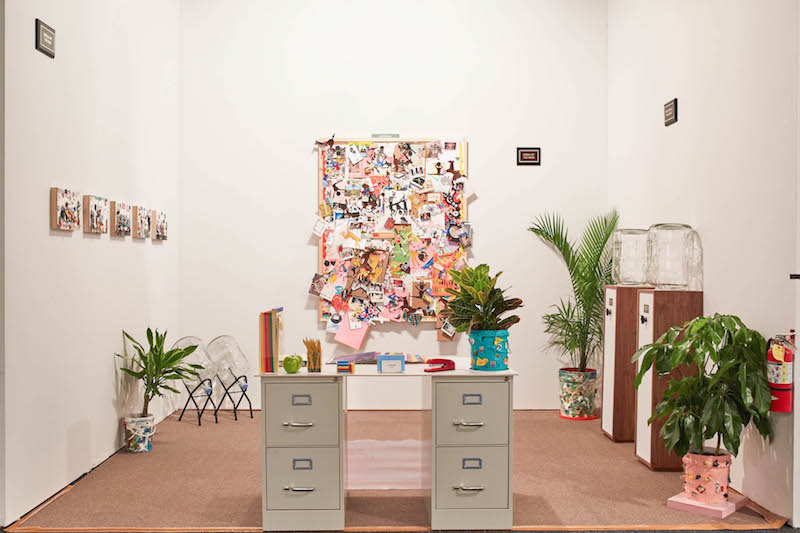 While most galleries utilized the ALAC booths simply as vessels to showcase their artists’ works, Devin Troy Strother of Club Pro (Los Angeles) appropriated the booth’s tight, white drywall to emulate a claustrophobic office space in ‘Water Cooler Talk’. The trite office furnishings—awkward indoor plants, water coolers, and central desk—further constricted the space. Especially when one steps into the simulated environment with another visitor, one is confronted with the same comical unease and irritation that employees face when interacting with their coworkers while refilling their coffee. From a distance, the office environment also espoused familiar fixtures such as name plaques, ornamental paintings, and a bulletin board featuring clippings. But instead of standard office-related clippings, there was a tide of arts and crafts-like materials, including black silhouette cut-outs of female figures strongly resembling those in Strother’s 2013 solo exhibition, ‘I Just Landed in Rome’, and similar cut-out illustrations of Michael Jordan, reminiscent of his 2015 show, ‘Space Jam’. Moreover, one of the small paintings lined on the wall portrays a communication between “Tyreek” and a coworker in the Human Resources Office, with little floating labels stating “Paper”, “Paper Sh*t”, “Fax Me”, and “F*ck F*ck”. It seems Strother exploits the internal frustrations that people of color often have to conceal in tokenized corporate worlds. Lastly, Strother satirizes the superficial formalities associated with cubicle culture and dismantles the often saccharine dialogues therein.

The Berlin gallery EIGEN + ART Lab also featured two artists, Tom Anholt and Charlotte Dualé, at the ALAC. Like Club Pro, EIGEN + ART Lab was placed amongst the eight younger galleries that comprised the Freeways section. Dualé’s organic and glistening sculptures, which could easily be likened to fresh internal organs, existed in contrast to Anholt’s cubist-like paintings, reminiscent of a quilt. EIGEN + ART Lab’s booth thus embraced and was exemplary of the ALAC’s higher commitment to paintings and sculpture in their eighth year. 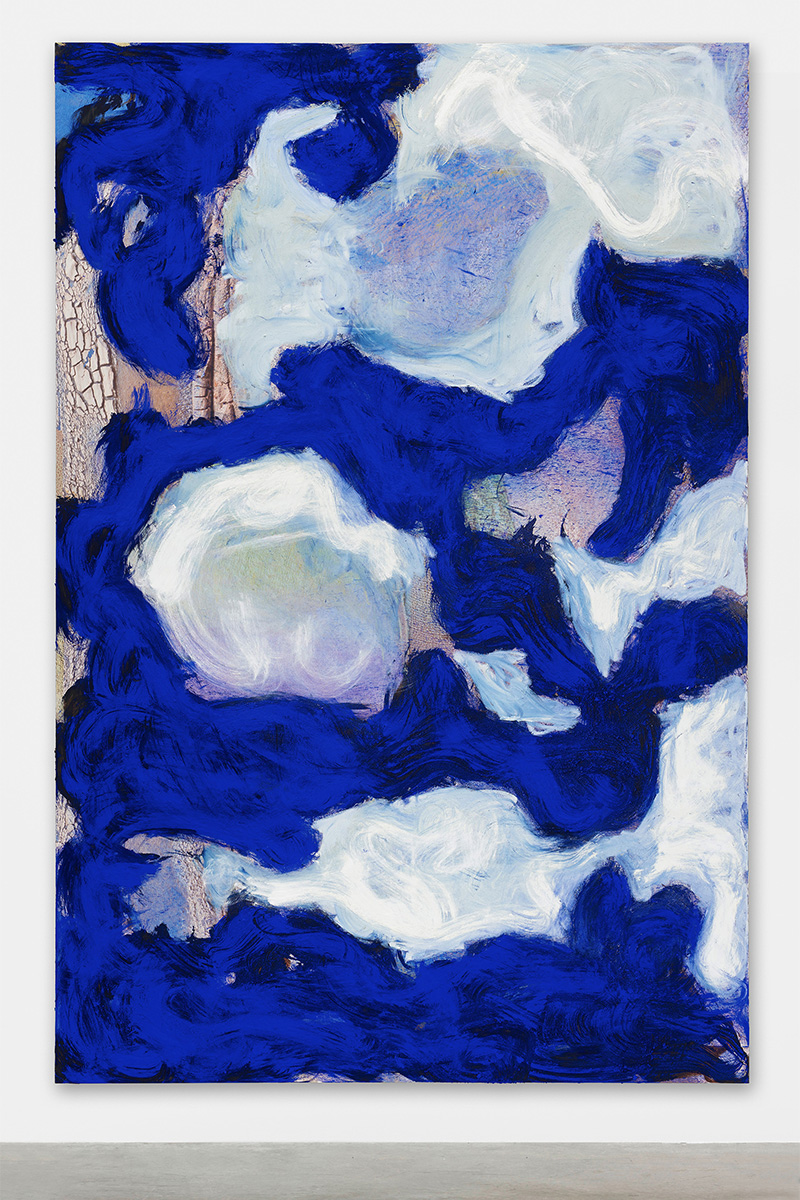 The next booth over, Peres Projects (Berlin) presented works from Joe Bradley, Brent Wadden, Blair Thurman, Dan Attoe and Donna Huanca. Huanca’s two pieces, ‘GAO-GUENIE’ (2016) and ‘LUMAHAI BEACH’ (2016) distinguished themselves as works on the outer sides of the booth’s walls, rather than inside, providing visitors and passersby a bold and mesmerizing introduction to Peres Project’s exhibition. Huanca, a native of Chicago with Bolivian roots, animates her towering canvas with oils, acrylics and pigments to produce a rushing and swirling composition in ‘GAO-GUENIE’. These materials, textures and gestures have precedent in Huanca’s other work, often salvaged and reapplied on the human body and skin as blank canvas. Indeed, the small windows of cracked, dry earth that appear below the brushstrokes reference both Huanca’s draw to minerals and soils that influence the pigments used on her human models and canvasses, but also the skin of the individuals on which Huanca paints.