Haus der Elektronischen Künste (HeK) is presenting its innovative exhibition ‘The Unframed World: Virtual Reality as artistic medium’ until March 3rd, 2017. The Basel-based foundation is an interdisciplinary venue that engages with all aspects of contemporary art. ‘The Unframed World’ is the gallery’s first extensive exhibition of artistic projects using the medium of virtual reality. 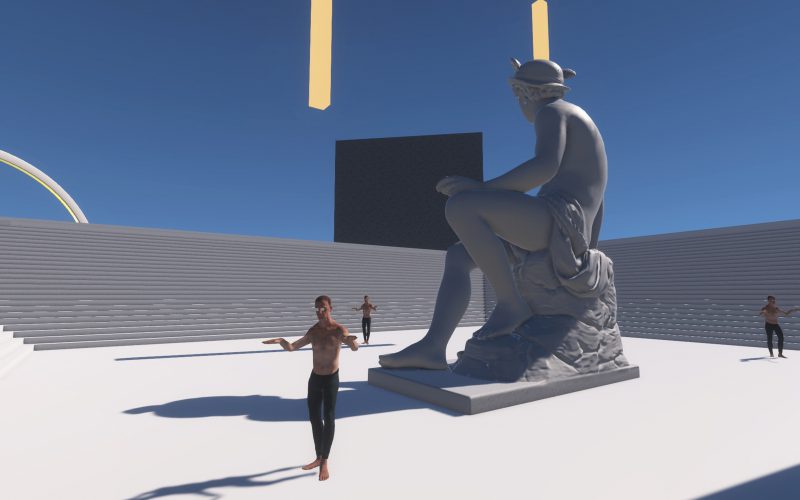 The exhibition will present virtual reality as a valid artistic category within the 21st century. HeK is exhibiting nine international artists, who through the use of installation, projection, sculptures and video work offer an alluring and immersive experience to the viewer. The group exhibition offers various artistic approaches towards virtual reality and attempts to overcome the limitations of a computer screen. Looking at a flat surface remains a passive experience for the viewer, ever aware of the difference between the screen and the real environment. The artists aim to give participants a heightened feeling of self-presence, enabling the viewers to exist within illusionary surroundings and within the dimensions of another world.

The works in the exhibition highlight the aesthetic potential of virtual reality and examine its role as a critical force within contemporary art and its reflection on states of being in the world today. The various artists address issues such as architecture and urbanity, bodily perception, physical dimensions and identity. As well as presenting the artwork, HeK will become home to the launch of various new technologies such as HTC Vive, Oculus Rift and Google Cardboard. 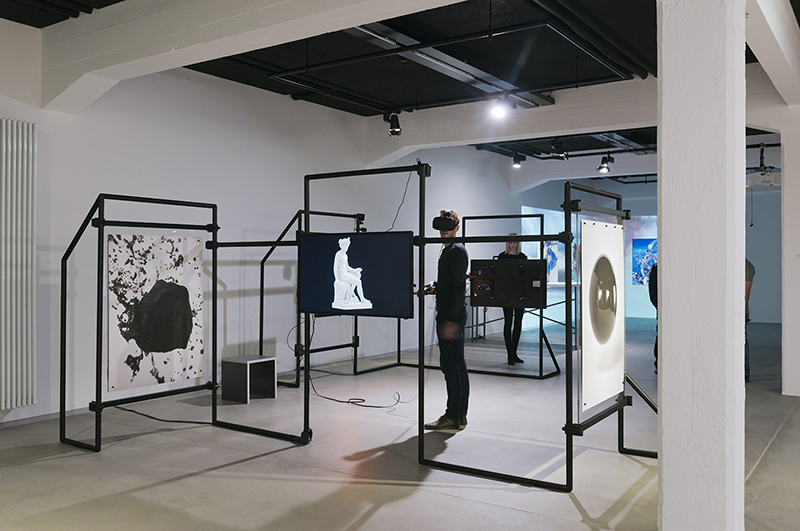 Banz & Bowinkel‘s work continuously focuses on the decline in separation between virtual and real areas. Their project piece for the exhibition consists of placing a digital layer over the real two-dimensional space of the exhibition hall. They combine dimensions, consistency, matter, videos and installations and unite them as autonomous parameters. The work breaks boundaries and constraints, enabling visitors to construct their own environment. Berlin Art Link managed to catch up with the duo and get their take on the exhibition and their reflections on the role of virtual reality within contemporary art.

Lisa Birch: Your work for ‘The Unframed World’, consists of placing a digital layer over the real two-dimensional space of the exhibition hall. The result is a virtual sculpture, unique for each viewer as the shape reflects the individual’s movement in the space. How does placing the viewer within a simultaneously virtual and physical space heighten awareness of self-presence? 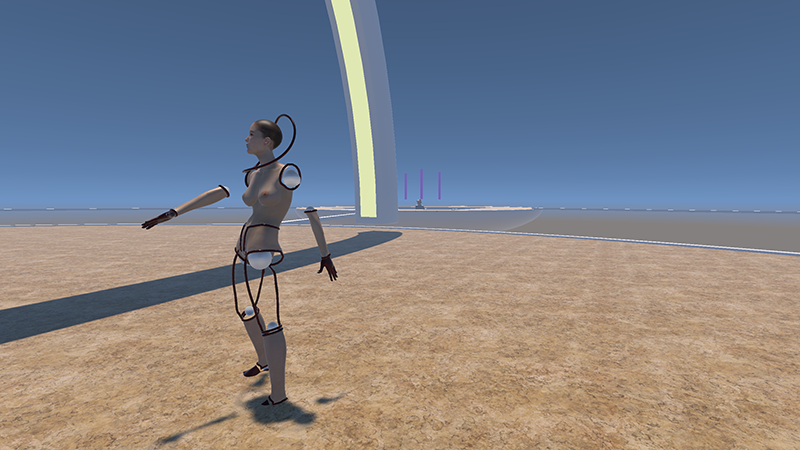 Giulia Bowinkel: In the beginning you tend to lose the self presence. The visual senses suggest that you are in the virtual space. Thats why we installed several webcams in the installation. On one island in the virtual reality world you can see yourself and the recipients in real space. Like the cinema, virtual reality seduces us into another world, other thoughts and emotions, another time, other physics. But unlike the cinema, in virtual reality there is no linear time line. You are the actor, thats the main difference. There is the additional possibility to simulate plausible scenarios around you, but without any physical consequences. This consequent impression could retrospectively lead to further awareness in our real world. 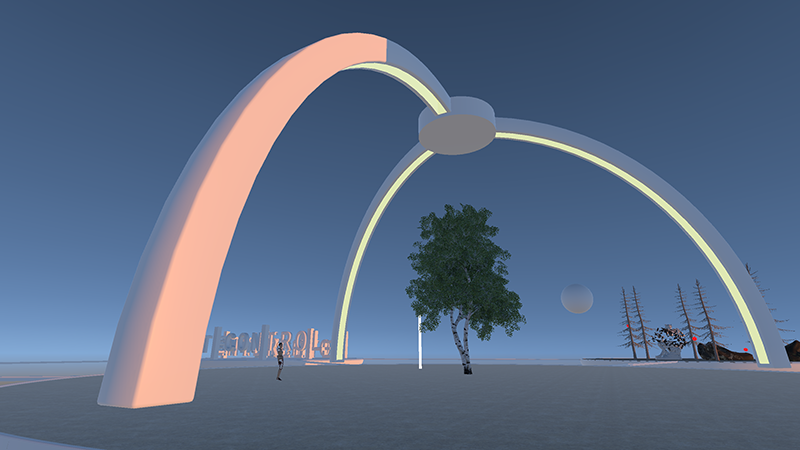 Friedemann Banz: Basically self-presence is achieved by the inner act of self-reflection, bypassing the perception and thus making the space around you obsolete. In the case of virtual reality we have the delicate situation where this outer influence on our senses is our own construction. The virtual reality is nothing given, it is in fact created by us. This could lead to a different understanding of self-presence and awareness. 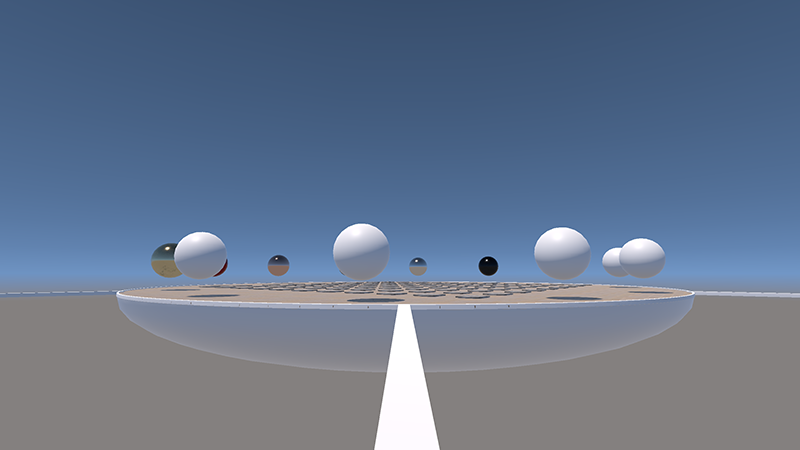 LB: The exhibition offers a virtual and immersive experience in which the viewer has the opportunity to access other worlds. What do you think is the driving force behind humanity’s desire to explore new surroundings?

GB: Moving is a driving force itself, I guess. For mankind there have always existed many reasons to explore new surroundings and often in a mythical way. Legends of gold and endless resources, a belief in holy lands, hope in a new society, and today the vision to transcend the mind from the body into a machine or to live on other planets. It is the wish to live in better conditions.

FB: Fear of death, I think. The will to survive forces us to encounter the unknown. We think it increases our chances to see things coming.

LB: The work generates reflective moments shifting between movement, virtual sculptures and snapshots. Technological tools have become an imperative part of our society but how do you think they serve as aesthetic potential for virtual reality within contemporary art?

GB: Its potential lies in creating experiences, conceiving aesthetics that can ́t be made in any other medium. These new technological tools exceed traditional artistic practices in certain ways. The digital revolution changed the conditions of our world and so the methods through which we explore these worlds changed too. Like with early photography as an expression of the industrial revolution.

FB: Ideally by using these technologies, art should see through them and unveil this imperative role in our society. When it is aesthetically pleasing, the truth doesn’t hurt so much. Art ought to transcend into these new technologies. Their influence on our culture is really broad. When the first industrial revolution occurred it completely changed the way people lived. Today there is hardly any field left that is untouched by digital technologies. Computers run everything. And we tend to ignore the fact that by running things you change them. ‘You’ is the computer here. The computer’s structure is quite different to ours. It doesn’t think but its conclusions can be quite interesting yet also quite devastating, depending on the scenario. The computer doesn’t care. We do. Or at least we should care about our environment that is mainly created and run by computers whose only job is to amplify our will. We are the sorcerer’s apprentice here. 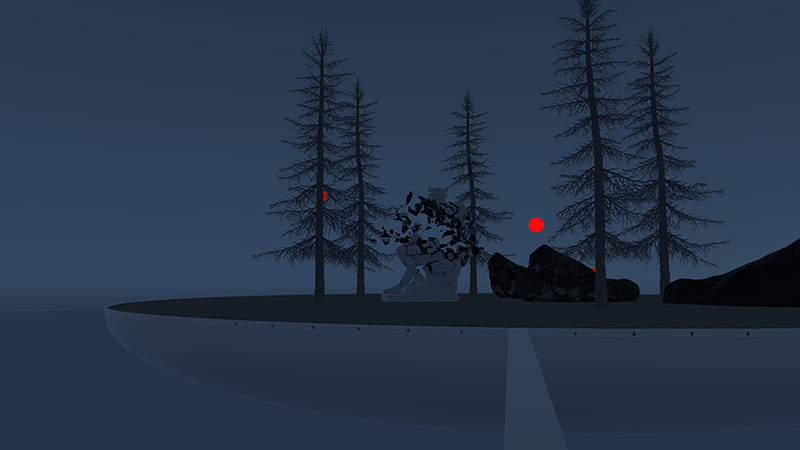 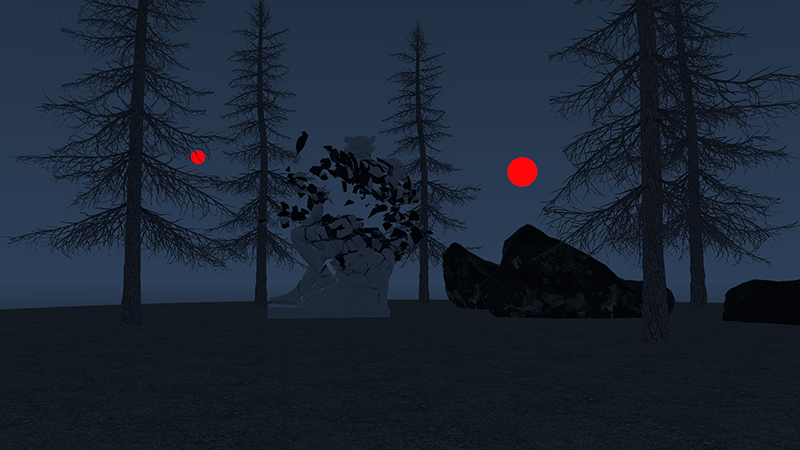 LB: Your piece touches on the contact between texture, body, space, mass, form and substance, with the viewer moving around in an illusionary space. However, the exhibition overall is extremely varied, expanding into other areas. The topics range from urbanity, bodily perception, physical laws, social issues, poetry, performance, gender and identity. Why has the exhibition incorporated so many topics rather than focusing on one specific theme?

GB+FB: Maybe it is too early to focus on a specific topic. There is still so much to explore, so much unknown territory. We think it is more fun to ramble about and thus let the topics that matter reveal themselves. They will eventually. It is like a voyage into the wilderness. That’s what’s thrilling us, this is the Neuromancer! 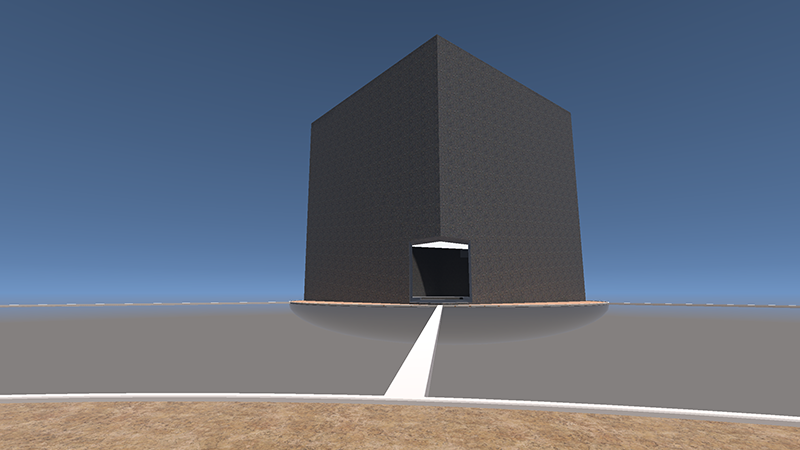 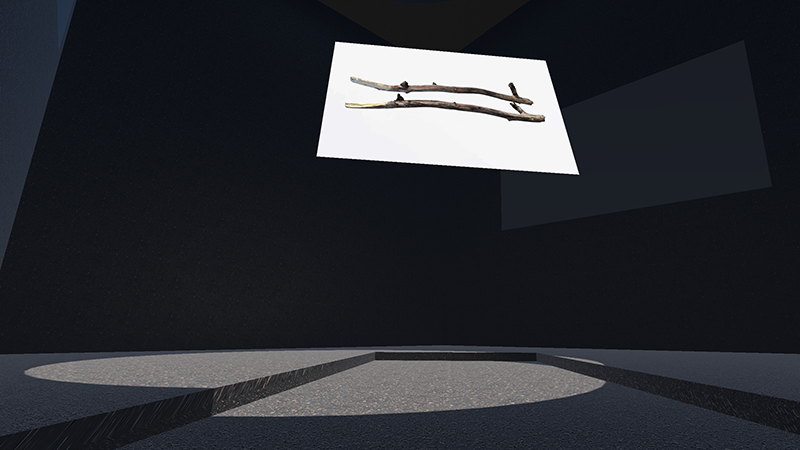 LB: In 2006, VR technologies were launched which were suitable for the masses, creating an accessibility which didn’t previously exist. Since this moment, in which ways do you feel these technologies have had the most impact on our every day lives?

GB+FB: In our perception, virtual reality technology has just become accessible. Until now it was a fancy tool for engineers and scientists in big companies and universities. Hardly anybody could afford a solid VR-setup until recently. ‘Oculus’ changed that some years ago but until this year also remained in a ‘beta-dev-state’, more or less for programmers, not for the average user. We think the gaming industry is about to change this. They have really pushed things forward and they are the only ones that can bring VR to the masses. They have the money, the market, the skills and the manpower. They will create and provide the tools that then afterwards everybody else will apply. Unless you have a department full of programmers, game-engines are the only way to get VR running. This and a solid PC. Game-engines and VR-glasses are the equivalents to the operating system and the smartphone. Once you have the phone ringing you can use it for almost any purpose. And this is what is going to happen to VR. It’s going to be everywhere. 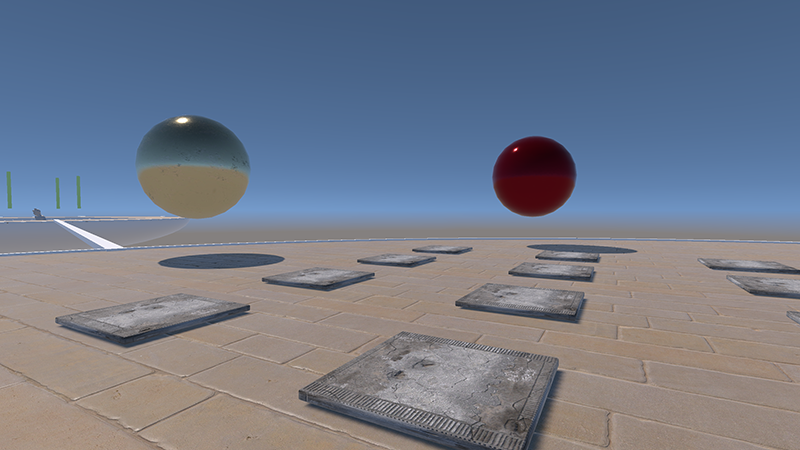 LB: The exhibition widens the expansion of reality. Do you believe in the future that there will be an increase in this unification between virtual and real spaces?

GB+FB: Definitely! We spend a lot of our time in virtual spaces already. The only difference is that they are not really three-dimensional yet. Facebook is a virtual space but it’s more a symbolic virtual space. It is a ‘room’ to chat in that is spread over all the internet. And today the only way to enter this room is through a two-dimensional interface. We can not really enter it physically, we sit in front of the window and look inside: and that’s a problem. The interface is not the room itself but it starts there. VR is opening the door to these virtual spaces by faking the physical facts of our perception and intertwining them with these new digital worlds we have just created. It adds this third-dimension to the otherwise quite abstract digital spaces so that we can enter them as three-dimensional beings and perceive it in this way. This is something that all the companies that run these interfaces will embrace. Because it increases the immersion. It drags us into their constructions. We are built to exist in a physical, three-dimensional and time-based space. It is more appealing to talk to a real person instead of talking to a photo or a textfield, but this will change too. 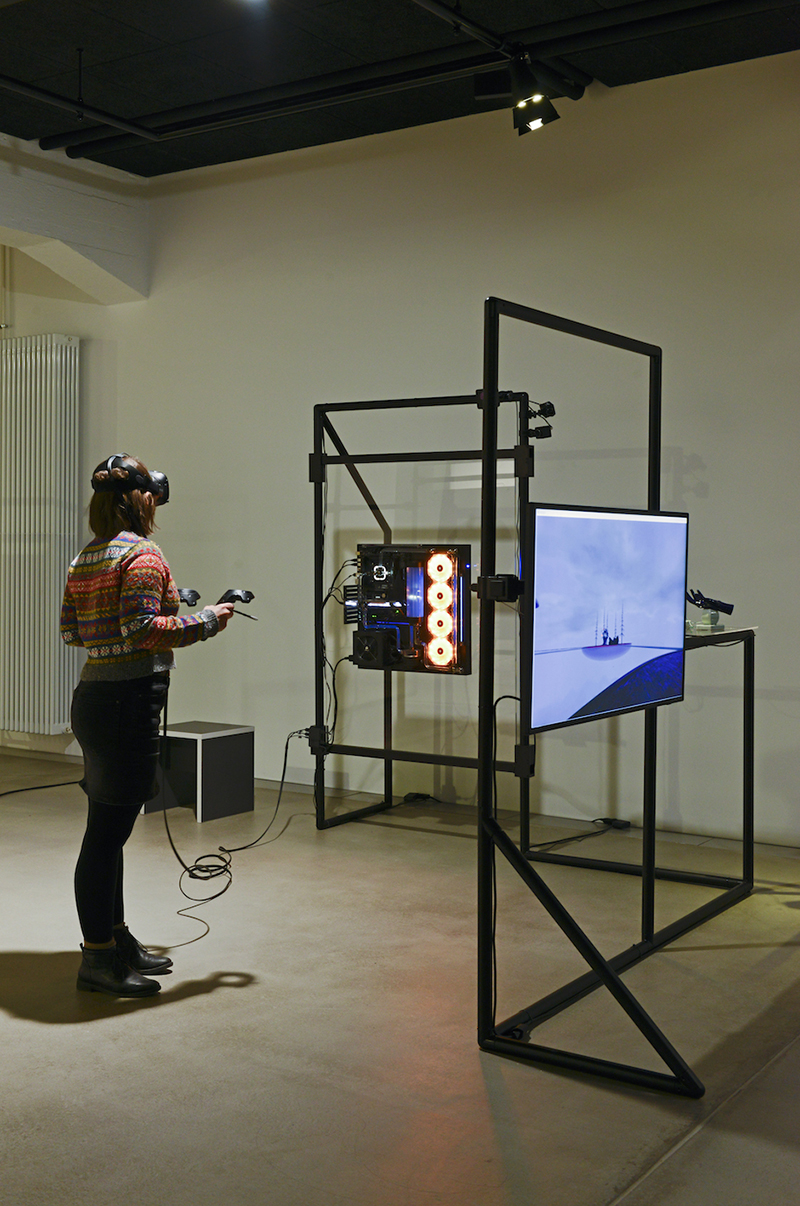 LB: Do you have any predictions for any changes which will occur within artistic practices due to the further development of VR technologies?

GB: Maybe artistic practice will become a more collective one, since on the whole, technology is based on cooperation and contribution. There is always a huge exchange.

FB: Artists will finally have to start programming!