The idea of a potent architecture (a box that not only contains, but also generates solutions) has been a favored utopia across the ages: a house that is mobile, turns into a vehicle and flies one away; a man is fused with his habitation; a coffer that turns into a palace; an invisible abode that is also a point of observation and escapes social control. 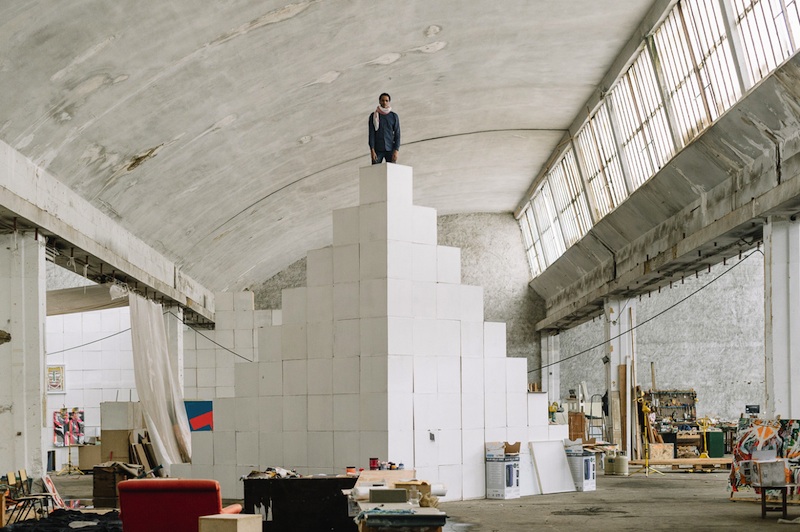 Francisco Vidal in his studio, Oeiras, Lisbon, for ‘The Spaces’ magazine // © Rodrigo Cardoso

Francisco Vidal‘s system of boxes is built to gather utopian concepts for concrete situations. The wooden boxes are containers and transporters of the artist’s paintings and his tools for painting, but also build architectonic structures that function as atelier, art gallery, amphitheater, library or museum. Minimally assembled, they carry possibilities for social space. They transmit philosophical thoughts and create connections between the present of the environment, building or situation in which they are placed and their history. Vidal proposes with his wooden boxes a both virtual and essential architecture and a real agency in the existing social and urban situations around him. The wooden boxes also recall a sort of ecological urbanism, in which natural materials are recycled and transformed into always renewed urban abodes, to fit changing needs in the city.

Francisco Vidal’s ideas recall the fascinating concept of the ‘fold’ of Gilles Deleuze. In his book ‘The Fold: Leibniz and the Baroque’, Deleuze adopts ‘the fold’ as a spatial paradigm. He explains that a building is not one space and one site, but many spaces folded into many sites. This folding of space into other spaces is, for Deleuze, architecture: a multiplicity, where everything is always read and re-read but can never be assimilated in its entirety.

In his writing, Gilles Deleuze explains the virtual as a potential, which is for him not an illusion, but a fluctuating, temporary manifestation of the existing potentialities of a certain situation. The mobile box-lab can be understood in this line of thought as a container with virtual load. It is a carrier of cultural information and memories, but it is also a carrier of potentialities. The boxes carry the tools with which cultural action can be concocted for a concrete, specific situation in the present. Vidal’s boxes show how these virtual possibilities of the present can be experienced in a conceptual, yet materially utilitarian way.

The virtual is directly related to the lived experience of potentialities in a determined social context. A box filled with virtual reality (in other words: the reality of possibilities) actualizes needs, projects, ideas and proposals. 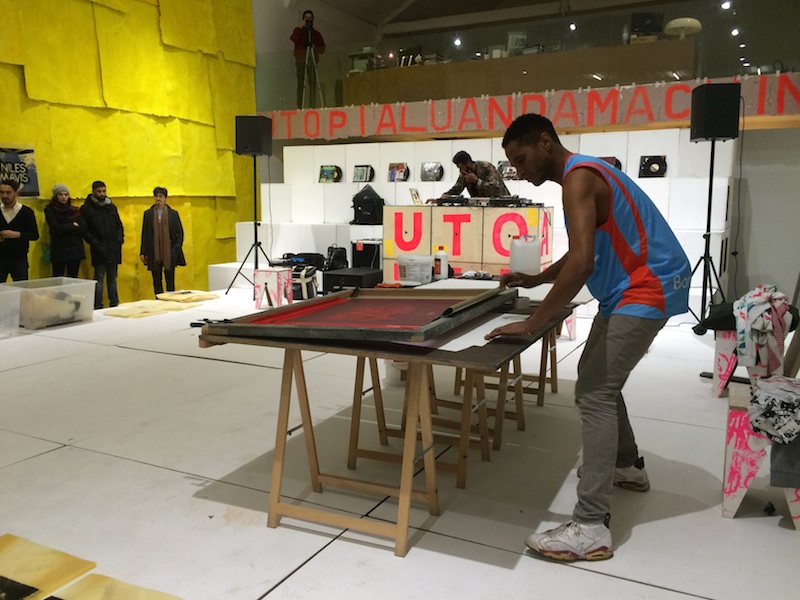 Marta Jecu: From which initial idea or need did the ‘UTOPIA’ boxes develop?

Francisco Vidal: It is important for me to know that my painting can travel, it has to go out from my atelier. I needed, therefore, to find a way to travel with the works. I developed this system to fold the paintings and make them fit into a box. The box can turn in no time into a wall, a table and a chair or an architectural construction and this represents the idea of a studio, which is productive without a lot of money. The boxes are therefore also coming from a financial strategy to put up a functional studio.

I am also working with recycled paper, as an ecological way to create new means to work and to compose images. What I usually do is decompose a structure in order to create another structure. The 60cm2 cubic boxes are built to subsume both the tools and the works. They are a structure that permits me to work in Lisbon, Luanda or wherever I am. It is a mobile and functional unit that can produce painting and meaning and thinking. The boxes are a machine: this year the boxes will function as an art school for children in the framework of an educational program in Luanda. We need structures to work well and to create value: from factories and schools to libraries. The boxes intend to reproduce these units, to reproduce their functioning and the connections between them. Value is food, is comfort, value is functional. Value is also a richness in people. So painting is not as elitist as it seems, it can also be a social function, it should be collective. 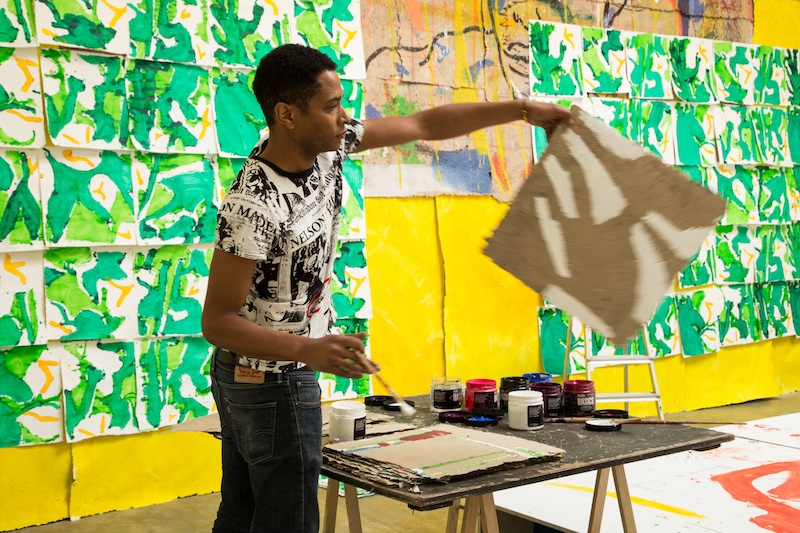 MJ: Where have these boxes traveled so far?

FV: Berlin, Leipzig, Venice, Milan and Luanda, London and New York and the next stations this year will be Luanda again and Belgium.

MJ: They are, in this sense, deeply connected to our contemporary way of experiencing and traversing geographical space, to construct connections between cultural spaces and to relate to historic continuity.

FV: The boxes are also indebted to the cultural spirit of the ’70s and the ’80 and especially our image of these times, which brought the reproduction systems and the philosophy of Andy Warhol‘s silkscreen and, a decade later, the xerox multiplication. These are techniques of reproducing images that function almost like a factory, that mass produces and reproduces propaganda images.

MJ: So you imagine your boxes as a system to spread a message?

FV: Yes, what I am trying to do with these machines and experiments are techniques of communication through images. And most of all, I am trying to create space for things to happen. With the conversation we are having right now, we are building up life in the box’s space.

MJ: What is your understanding of virtual reality: not connected necessarily to digital media, but as a philosophical tool and how it helps shaping reality?

FV: Drawing, geometry and mathematics are connected fields. I started the experience of the boxes thinking about the 3D projecting system in Excel. With the boxes, I am building an excel projection with physical measures and volume in which I can deposit ideas and objects. 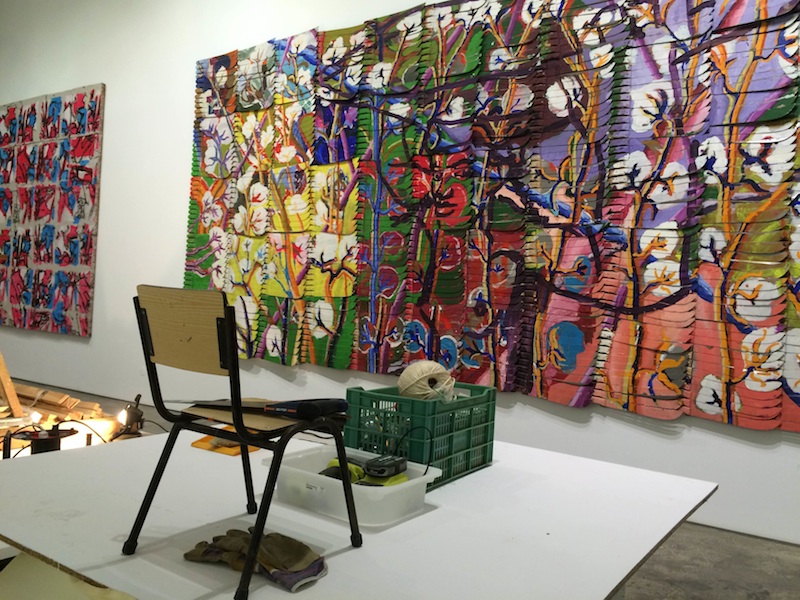 MJ: Tell us about the history of the foundry where your atelier is located (Fundicao de Oeiras)?

FV: In ’59-’60 the cotton industry was developing in Angola, under the Portuguese colonial regime. The workers revolted in 1961 in Baixa de Cassanje, not happy with the conditions. In response, the Portuguese troupes launched a napalm bomb in the cotton fields and killed many people (it was the time of the Vietnam war, where the bomb was heavily used). The bombs were made in the factory where my atelier is located today. Working in this factory, I feel I belong to a historic cycle: being here, we can do something meaningful in the continuation of this history. I am bringing close to me these events while working systematically on cotton paper and on machetes (the symbols of the Angolan War of Independence) and using the cotton flower prints in my silkscreens.

I understand my work as embodying a whole cycle of consequences of these economic and cultural wars, of agricultural policy and of the economic strategies, for example, also of the Dutch wax print fabric industry in West Africa.

MJ: Why do you call these boxes ‘UTOPIA’? Do you understand the idea of utopia as a projective action?

FV: Because the box system is a factory and I, as a painter, am the engine of the factory, while I am using my body to produce fabrics and paper in a low scale. This is an utopian move and is meant to evoke the dream that Angola would not rely primarily on petrol, but develop different kinds of small-scale industry and agricultural production.

Luanda is the place where I started to do the boxes and it is the place where I have learned about the past and present of this country. I am doing these paintings as documents, as personal memories of what happened historically and what makes me understand the present. 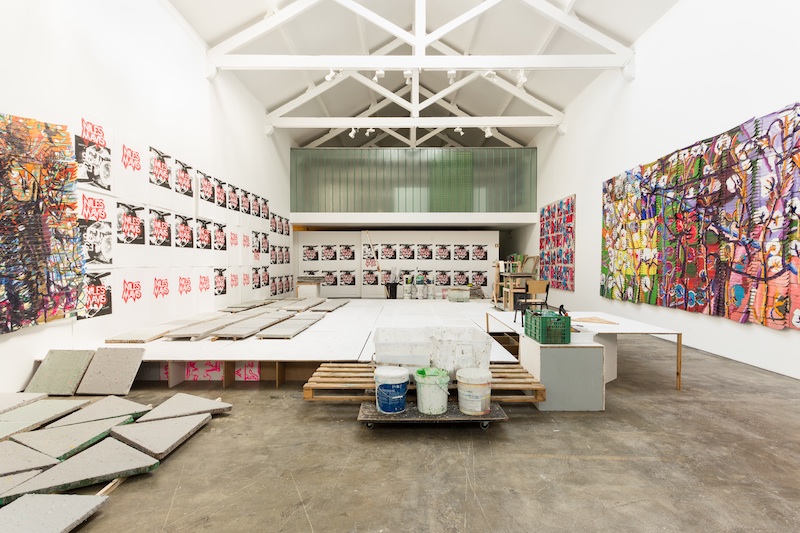 My project is about the utopian relationship that we have to the idea of ‘work’. The cotton flowers are a symbol of work and, at the same time, a symbol of slavery from the 15th-19th century. Regarding forms of 20th and 21st century slavery—the point in which we are now—the cotton flower functions as a reminder of the past. Even an artistic process, which brings no profit or the impossibility to remunerate (painting, cinema, a good book and any kind of work that one enjoys), are due to aspects of slavery inside the actual economic system. I am painting as an intellectual endeavor and as a re-enactment of these processes. I am thinking about what it means to built something in time and the rewards and consequences that manifest out of your ideas and constructions. It is about the stages that you can reach by being true to yourself and to other people that live with you. For me, utopia has to do also with the possibility to communicate difference on a personal and social level, to express what one needs and loves and does not love. Painting is communication of a reality that vibrates and that transports a collective meaning. The boxes store these values.