transmediale‘s robust programme for this year’s edition of the festival, Ever Elusive, also included experimental performance. The Instrument Inventors Initiative, an artist-run-platform based in The Hague, presented the pieces ‘Ground’ and ‘iMac Music’ live at the HKW’s Café Stage.

The performance of ‘Ground’ was centred around a white canvas marked with graphite drawings. Using the graphite as a conductor for electricity, inventors Jeroen Uyttendaele and Dewi de Vree created various circuits by moving two sets of pins along the markings. Depending on the positioning of the pins, circuits were lengthened or shortened, producing sounds of different frequencies and amplitudes. By further thickening or erasing the graphite and altering the speed of their gestures, the performers manipulated and controlled the rumbling soundscape produced by their self-made instrument. 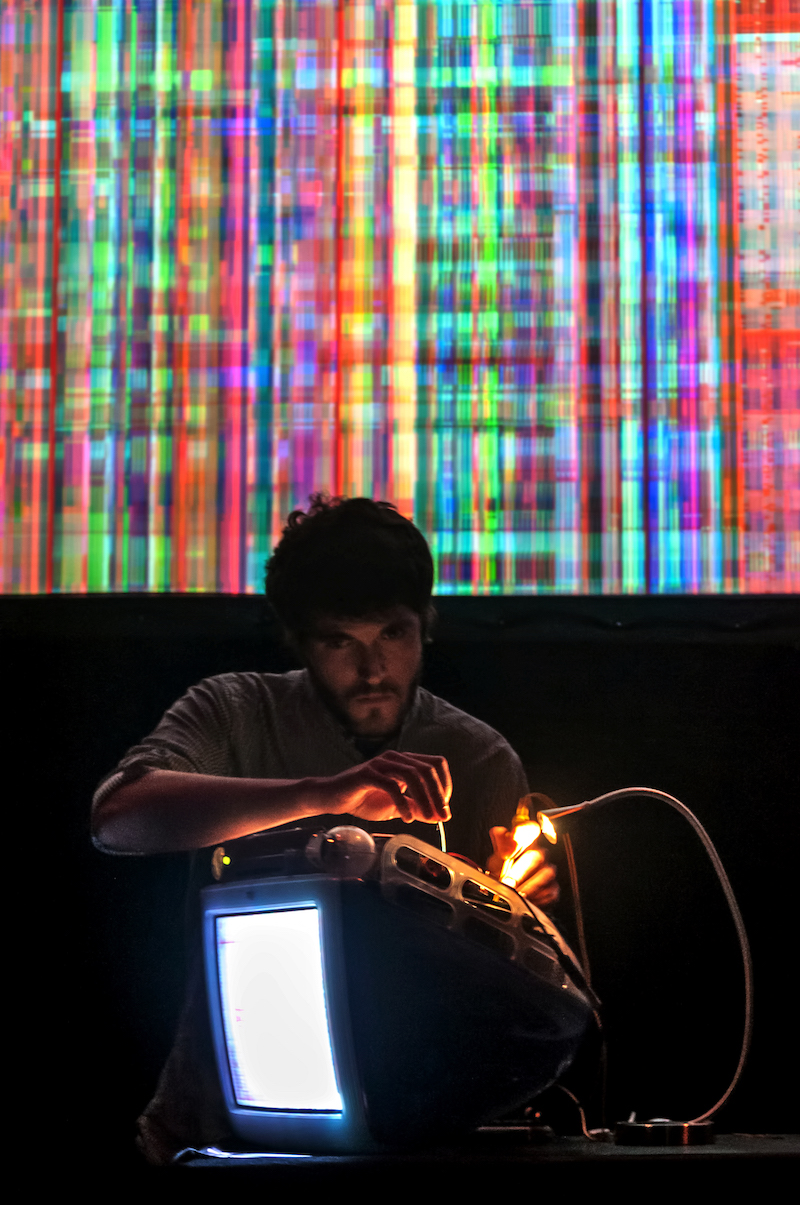 Although Uyttendaele and de Vree’s subtle movements could be followed—revealing how the board was connected to the generated sounds—the exact links remained impossible to figure out. Throughout the piece, Uyttendaele and de Vree constantly changed their approach and introduced new ideas, thereby maintaining the enigmatic quality of their alien-like machine. As strategic as a board game and as versatile as a musical instrument, the controllers of ‘Ground’ kept covering new ground. Only one domain remained completely unexplored: what would happen if the two sides of the drawing merged?

‘iMac Music’ consisted of the live hacking of an old iMac G3: a model, that, famously responsible for revitalising the Apple brand as design-oriented and trendy, was no longer recognisable. Unlike the dissected machine, the projection overhead consisted of the fully intelligible image of the computer’s desktop background. Jonathan Reus hovered over his deconstructed creation and began to manipulate its unmasked electronics, immediately affecting the visual representation of the desktop functions. Accompanying his alterations was a series of sounds, generated by the sound amplifying probe that he used to pick at the wires.

At first, the desktop background hardly changed. With subtle adjustments, the computer began to bug and slight defects became visible. The familiar icons of applications jumped up energetically, doubly functioning as dancing glitches and erasers of other faults. Gradually, as Reus continued to mess with the system, the defects took over, transforming the computer interface into a technological vortex. Diving into the deep end of the digital, Reus playfully intercepted and distorted the computer’s visual and sonic worlds. Unclear as to whether he was caught in binary limbo or acting as master controller of the chaos, Reus proved that ‘to destroy’ can also mean ‘to create’.