“Madame Bomba is a persona that has a fake red TNT bomb strapped to her chest. The bomb cannot explode. And she cannot get rid of the bomb.” So begins Rima Najdi’s ‘Happy New Fear’, which debuted at Hebbel Am Ufer—HAU 2 last week as one of the highlights of the 2017 CTM Festival. The first seeds of the show were planted in 2014, when the Lebanese-born artist first assumed the role of Madame Bomba on the streets of Beirut—an intervention that provoked fear, anger, and derision. The CTM audience arrived to a pre-recorded voice sardonically dismissing Najdi’s work, its criticism culled from online comment threads about Madame Bomba.

Now, the project has blossomed into a full-fledged multimedia performance. ‘Happy New Fear’ centers on the body in a climate of terrorism: emitting and absorbing suspicion, always on alert. “When you’re witnessing—on a weekly basis—an explosion or a bomb, and that kind of panic”, Najdi told me in an interview, “suddenly you don’t see your friends anymore because your friends are afraid to go out.” Though the script shifts between the first, second, and third person, the audience inhabits the perspective of a singular observer moving through the streets, wondering when and where—and who—the next bomb will explode. 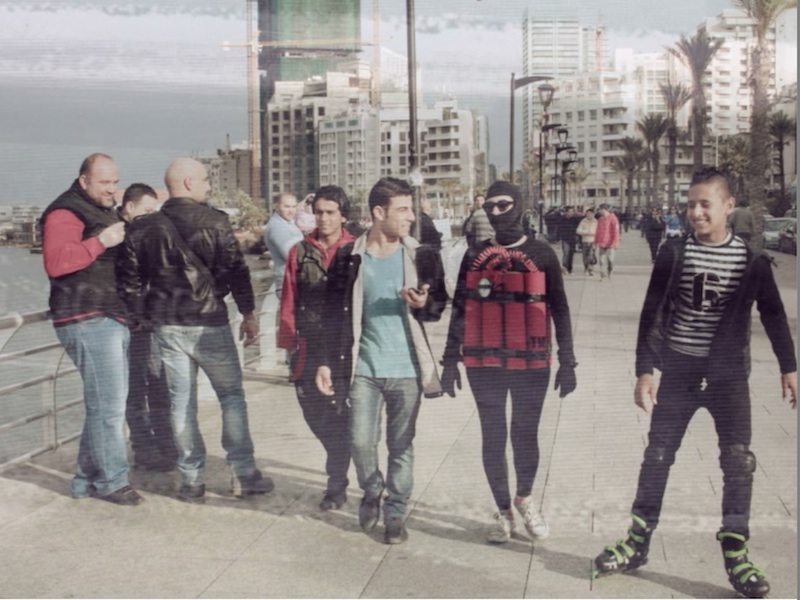 ‘Happy New Fear’’s filmic, sonic, and textual elements are all in constant conversation with each other, sometimes working in tandem, sometimes offering contradictions or differing perspectives. Theresa Baumgartner’s lighting design establishes a hypnotic, immersive space for the other multimedia elements: archival footage and new material shot in Lebanon expressly for this commission and displayed on split screens; field recordings and warm synth arpeggios; longer story arcs and more poetic fragments. At one point, to great effect, Najdi simply repeats the phrase “a suspicious body” until its music begins to overpower its meaning.

For all its darkness, it’s a joyfully experimental hybrid show, comfortably straddling film, sound, and script, with equal weight given to Najdi’s narration-heavy, almost sculptural performance and the audiovisual contributions of her collaborators Kathy Alberici (music and sound design) and Ana Nieves Moya (live visuals), who worked from the margins of the stage.

A threat that could be anywhere is a threat that is everywhere. ‘Happy New Fear’, then, is a means of opening a space of complication where the audience and performers conjure up the spectre of this threat together.

If that conjuring is safe, then it, too, must be regarded with suspicion. This is a show that makes everyone complicit, either in their fear, or their lack of it. One of the performance’s most powerful passages directly implicates the listener in these double-take exchanges of mistrust, as the narrator eyes passersby on the street and people in surrounding vehicles, wondering if one of them may be concealing, behind their calm, a weapon, all the while knowing that these strangers may be wondering the same thing about her:

“I try to find some warmth in my gaze towards you, but I can’t. There is no empathy in me towards you. You become distant. You become suspicious to me. You start stimulating desires in my unconscious – desires not only about you, but about other bodies in this space. I start envying your passiveness and regard it as power – a power that I can’t have. I start to get jealous. I begin to hate you.”

The power of these passages lies in no small part in their abstractness—the I and the you, both under threat, both potential threats—but the audience need only gaze down to below Najdi’s feet to see the very concrete source of the danger: attack after attack in Beirut listed on diode displays, suicide vests and car bombs, each punctuated with the date and the number of victims.

‘Happy New Fear’’s strength lies in its ability to sustain uncertainty, to shift seamlessly between the suspicious subject and the subject who suspects, the body that fears and the body that is feared. It’s a deeply moving performance that both depicts and provokes anxiety. Najdi doesn’t attempt to offer any answers. Instead, she dares to regard this suspicion unflinchingly, and with a suspicious eye.

A radio version of ‘Happy New Fear’ will be released by Deutschland Kultur at the end of March.