Over four days last week, the modernist factory Van Nellefabriek was once again home to Art Rotterdam. This year saw the 18th edition of the contemporary art fair with a focus on young galleries and artists. Art Rotterdam brings together leading galleries from across Europe but it is the Dutch galleries that were out in full force. Focussing on the latest developments in contemporary art, the fair presented work emerging from an interplay between digital and physical aesthetics. 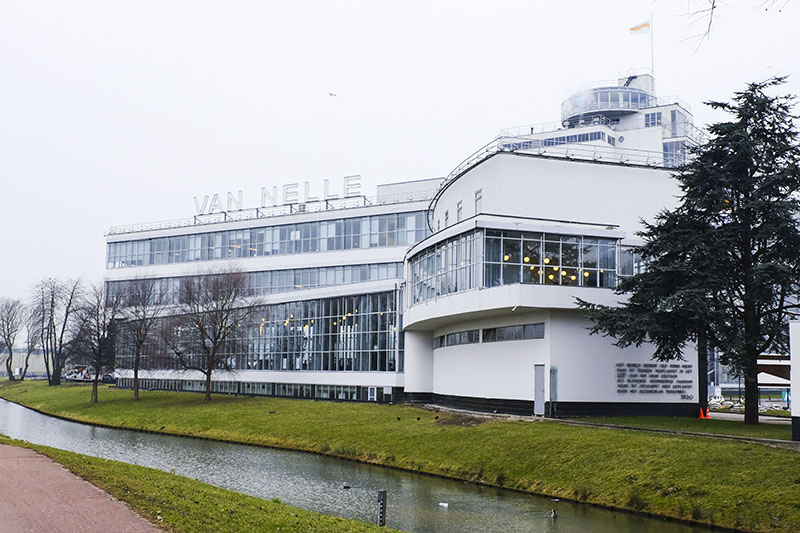 In the ‘Main Section’ Dutch gallery Mieke Van Schaijk was showing an installation with the newest works by Gino Saccone. Saccone makes large, double-sided tapestries of digital landscapes: these works originate from computer-generated images and are then manifested into physical objects using textiles. His practice is a collage of analogue and virtual aesthetics. Acknowledging abstract traditions, Saccone creates a space where the two-dimensional and three-dimensional meet. 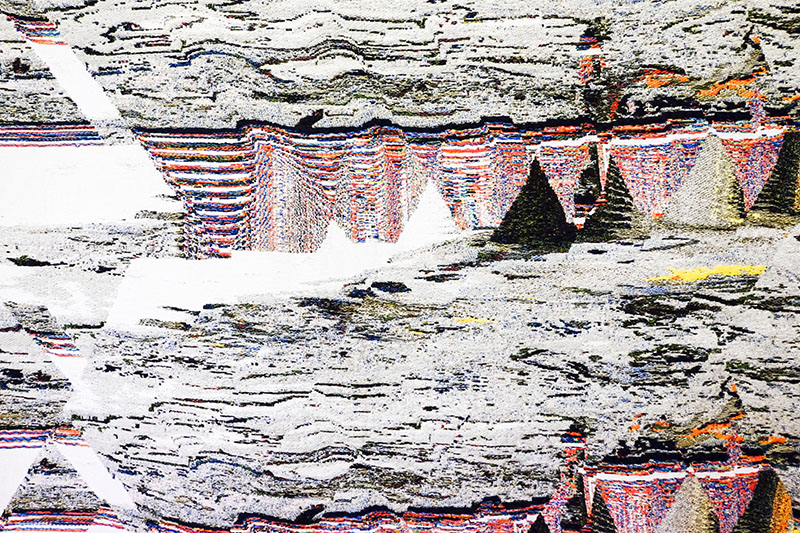 Another Dutch gallery shedding light on human-computer relations—located in the ‘Main Section’ of the fair—was Upstream. The Amsterdam-based gallery presented a group exhibition that consisted solely of digital works, looking at the impact of digital culture on the visual art world. Amongst the exhibiting artists was Harm van den Dorpel, a Berlin-based conceptual artist from the Netherlands who is regarded as a key figure in Post-Internet Art. In his work, Dorpel investigates algorithms and evolution, using computer-programming he is able to generate images by cross-breeding works to produce another. This process feels both organic as well as sterile and leads to questions regarding expression, intuition and Artificial Intelligence. Dorpel was also presented by Berlin gallery Neumeister Bar-Am, who showed works from his new project ‘Death Imitates Language’, exploring meaning in generative aesthetics. In addition to online works, for this project Dorpel has also created 100x100cm multi-layered collages using UV prints and laser-cut Perspex glass. 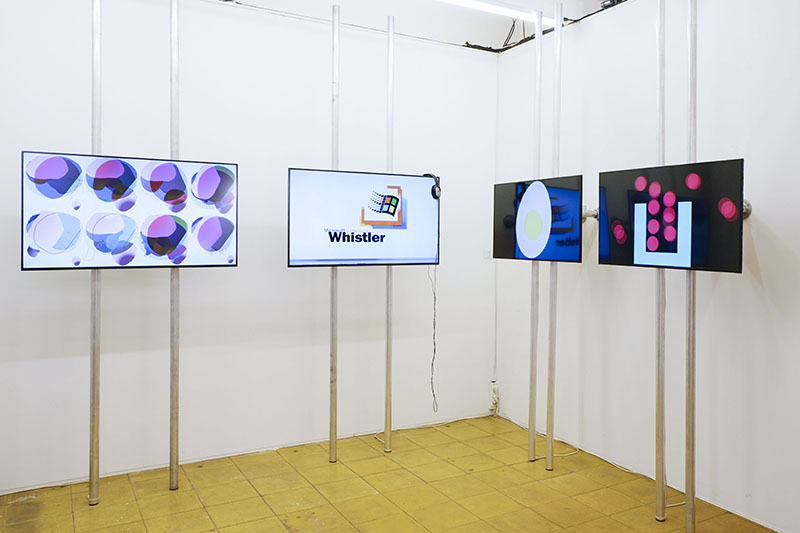 Other Berlin galleries present at this year’s fair in the ‘New Art Section’ included Schwarz Contemporary, Grimmuseum and Sexauer. Schwarz Contemporary was presenting works by Johanna Jaeger from her 2016 exhibition ‘Infinite Release’. Jaeger works with analogue photography to create crafted images that play with the viewer’s perception of the ordinary or mundane.

French–German artist and filmmaker duo Elise Florenty & Marcel Türkowsky were represented by Grimmuseum at the fair. Their new series of work ‘Kaktos Atlas’ investigates the relationship between human and cactus. Florenty & Türkowsky have created interchangeable images using sliding screens, within a three-dimensional frame. Borrowing techniques from Japanese puppet theatre, their work explores perception and the interplay of the animate with the inanimate. 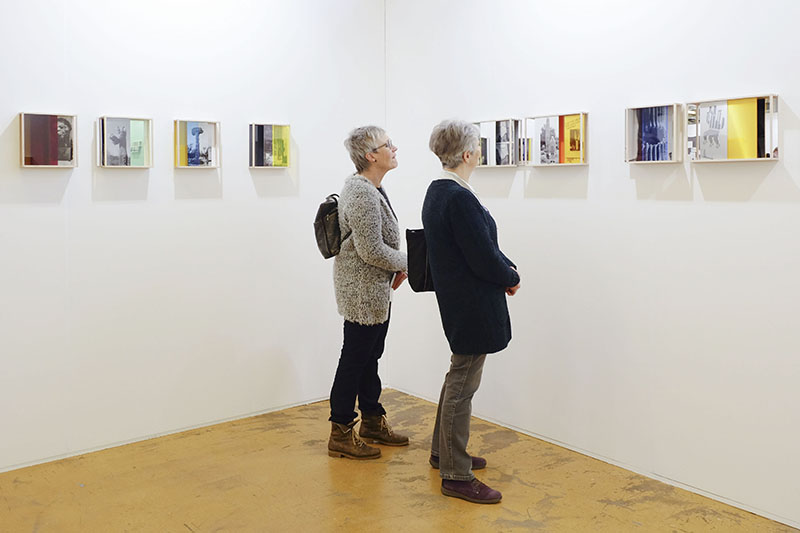 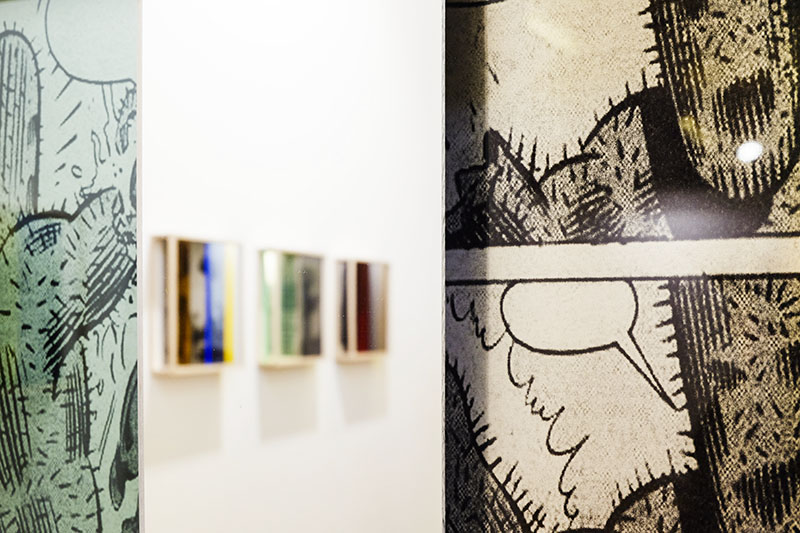 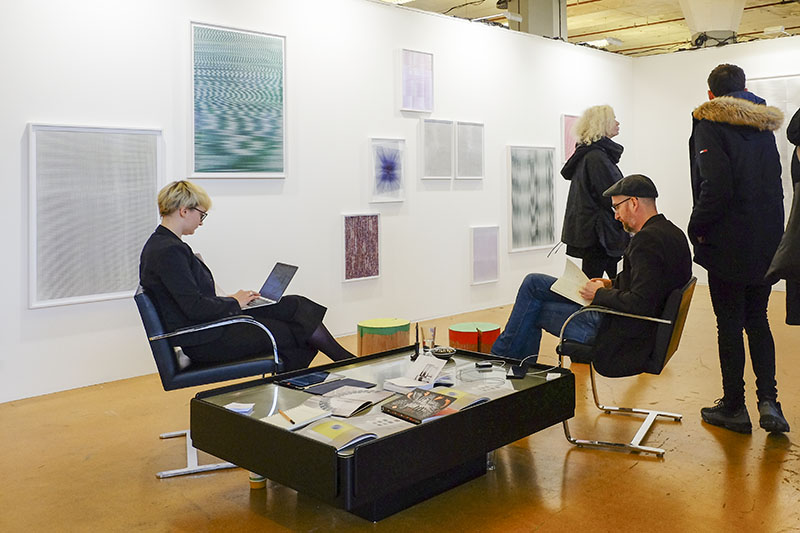 Another highlight of the ‘New Art Section’ was up-and-coming artist Felicity Hammond, presented by London gallery Space In Between. Hammond’s installations cross photography and sculpture and seek to explore the space between past and present. The artist engages with photographic renders and 3D mock-ups of building sites, retail spaces, and advertising. By utilising the glossy aesthetic of these ‘non photographs’ she creates utopian environments infused with the grotesque. The tension and play that her work emanates reveals the false promises of these imagined spaces. Hammond pushes her practice into a realm in which the possibilities of what photography can be and its boundaries are explored. Viewing Hammond’s work, one is aware of photography’s ability to create deceptive representations of the world by reifying and omitting certain values. By sculpting these digital images in the physical world, she is questioning their ideological nature and demonstrating to the viewer how, on closer inspection, they begin to break down. 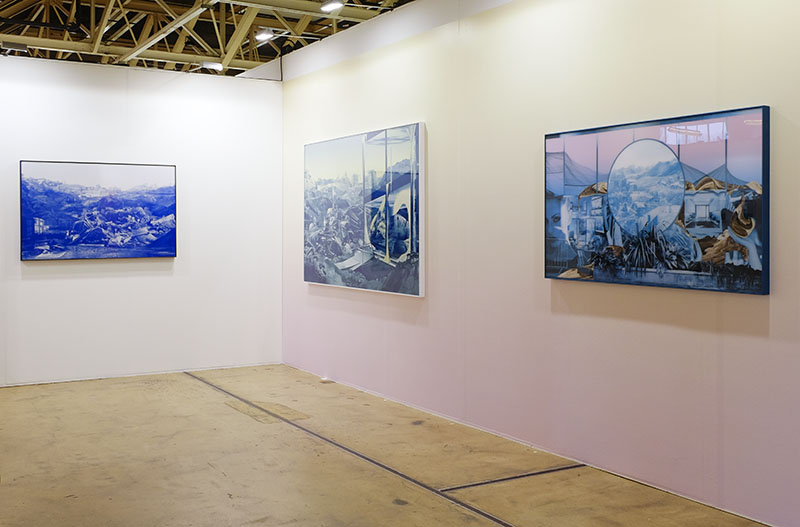 Felicity Hammond presented by Space In Between 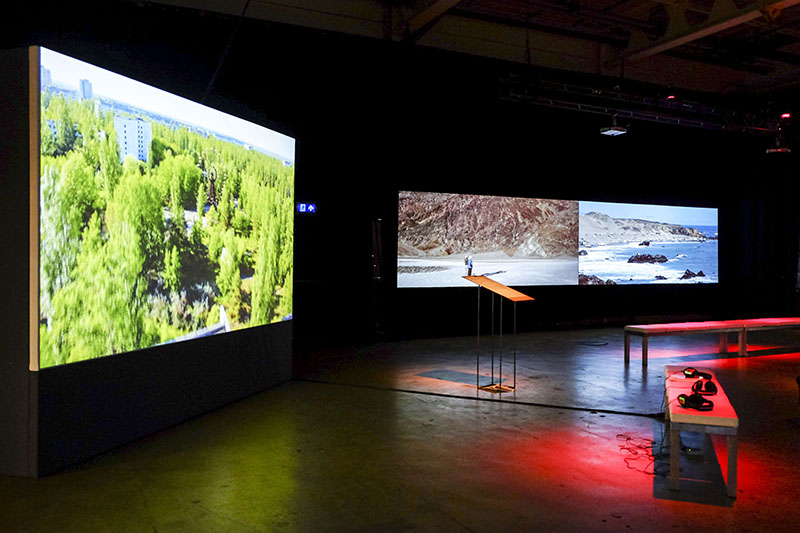 In the ‘Projection Room’ Mexican artist Raul Ortega Ayala’s haunting new film ‘The Zone’ was presented by Dutch gallery Dürst Britt & Mayhew. The film is an exploration into the now uninhabited town of Pripyat in the Ukraine. Pripyat’s population of 49,360 was evacuated on an April afternoon in 1986 when an accident took place at the nearby Chernobyl Nuclear Power Plant that the town was founded to serve. This catastrophic event is an example of man-made technology going terribly wrong. Narration of the lives of the people that lived in Pripyat at the time of the accident is juxtaposed with footage of the ‘neo-ruins’ and the inevitable takeover of nature that has claimed the streets and buildings. This uncanny portrait of absence disintegrates the space between past and present and raises issues that go beyond the personal stories. Ayala’s work is concerned with topics that are deeply aligned with our current political climate; questions about the displacement of people and the erosion of communities, the pollution of our planet for profit and the devastating consequences that these issues have on societies mental and physical health.

This year’s Art Rotterdam was an exploration into the evolving relationship between human and technology through contemporary art.