Of all the heart-wrenching scenes I’ve witnessed in two years commuting between New Jersey and New York city, one of the saddest was that of two Donald Trump supporters demonstrating outside the tycoon’s Manhattan tower. It was a drizzling spring day, and the men were dismal trivialities within Fifth Avenue’s pedestrian flow. Before continuing on my way, I snapped a photo of one of their jackets: a bomber, emblazoned with the usual facile slogans of American greatness. 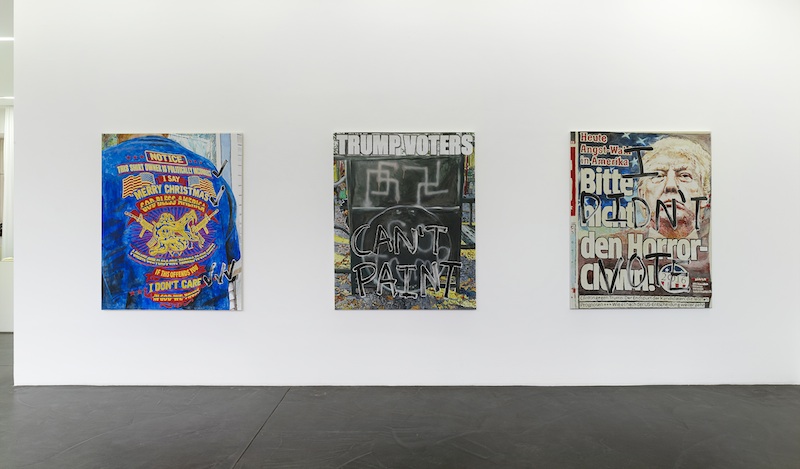 Ten months and one horrific election later, a similar jacket has appeared in Berlin’s Galerie Nagel Draxler, in a painting by Christine Wang called ‘Merry Christmas’ (2017). Despite its sensational subject matter, the picture contains surprising subtleties. Because we only see the jacket’s back side, its wearer is afforded a vulnerability incommensurate with his tribe’s aggressive reputation. Moreover, certain slogans on the jacket have been crossed out with a black marker, as if the original photograph had been gone through by a copy editor of images, before reaching Wang’s studio.

It’s clear that Wang works from photographs, as her paintings have none of the skewed and awkward charm of those made from memory. Although her mark-making has a kind of impressionistic looseness, it’s deployed with perfect uniformity across each canvas, so that the paintings hover on the verge of photo-realism. The works are mannered, but its a mannerism with purpose. When this kind of carefully tuned vernacular painting comes into contact with social grotesqueries, a sour discomfort is produced. While this isn’t the most novel formula, the effect can be cutting, like flipping through a Norman Rockwell calendar and coming across a white supremacist rally, or hardcore porn scene. 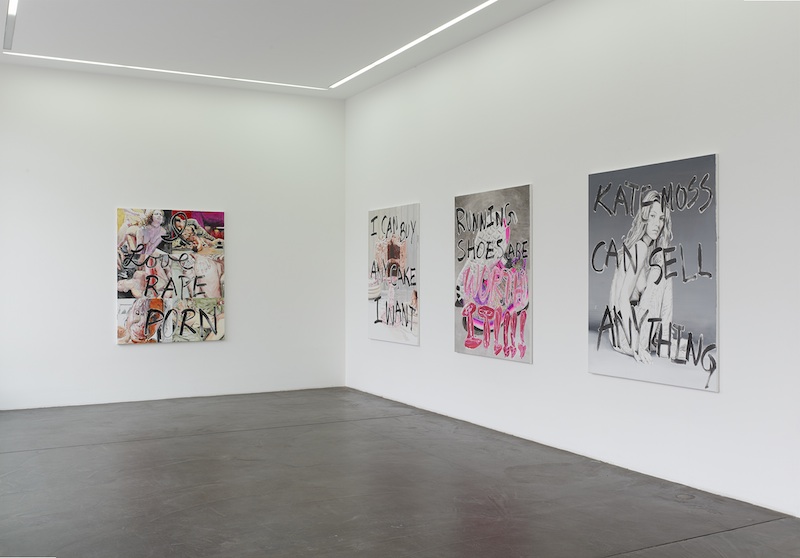 It’s laudable when an artist attempts to agitate the blithe dream state of neoliberalism, as Wang does with her caustic imagery. This is especially true in a commercial context, where affirmative pictures sell, while difficult ones languish in storage. But, in describing the complex of fetish, desire and power so head on, these paintings risk flat-footed sarcasm. Theoretically, Wang’s use of text complicates each work by pressuring the viewer to engage with the problem of their own spectatorship, in relation to that of the original photographer, and the artist herself. But, in practice, the blunt directness of Wang’s phrases produces the opposite effect, modelling the act of critical interpretation for the viewer, rather than compelling them to think.

Wang is at her best when she brings acerbic wit to bear on images less sensational than Trump voters, rape porn, or ineptly painted swastikas, as in ‘Untitled (TrumpVoters)’ (2017). ‘Health Insurance’ (2017), for example, ushers into the cruel absurdity of privatized health care, into the ebullient aesthetic of Hallmark cards. Here, we see a man and a woman standing beneath a floral arch. He is dressed in the standard working class uniform of blue jeans and t-shirt, she a wedding dress. Over the image, the phrase “I married for health care” has been written in elegant cursive. While abusive pornography and racism are worthy subjects, this image presents a slower burning parable. As the couple exchanges vows, we’re reminded of the lurking exigencies of class and finance that will press on them, once the honeymoon comes to an end. 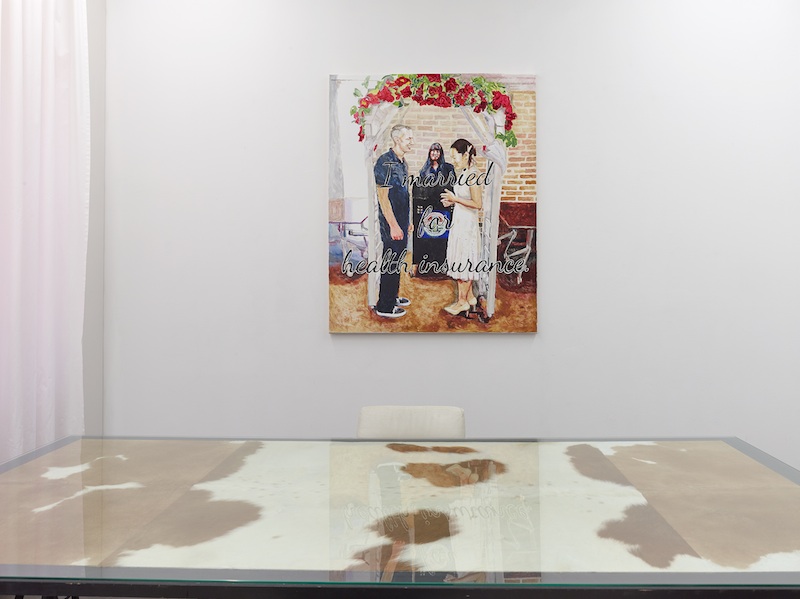 While this exhibition hosts cruel and necessary topics, the paintings themselves go through the motions in order to deliver this content. Wang is searching for a way to present desire and all of its contradictory social effects, within singular pictures. Within this project, the point of using paintings is that their obdurate materiality and uniqueness contrasts against the disposability of the digital images she works from: a disposability that renders moments captured, equally expendable. It follows that the viewer cannot simply treat these paintings as images, but has to return to the specificities of their making. Upon doing so, it’s disappointing to find Wang’s impressive facility with depiction used so straightforwardly. Across the show, she seems to have chosen a concept, before executing with zero margin of error. As a result, paintings meant to be transgressive become decidedly safe.

Still, Wang’s combination of skill and biting insight ripples with potential. Her skill may prove to be a liability, though, if she doesn’t keep viewers on their toes, by taking painterly risks. With this show, she has attempted to put figurative painting in service to an acidic reflection of the times. Despite qualms over technique, that’s an ambition difficult to contest.