For those who visited Nasan Tur’s recent solo show at Blain|Southern, ‘Funktionieren’, it would be easy to think that you have already been privy to the inner-workings of the artist’s studio. In the centre of the gallery, he set up a fully functional print studio, where he was present with a team of assistants two afternoons per week, making carefully carved woodblock prints as visitors observed him. Cool and calm, there was an air of quiet diligence not welcoming disturbance, as loaded statements typical of those that bombard us through social media each day emerged from the wood panels. The oldest known method of printmaking, this process slows our reading of statements such as ‘Empathy is Naïve’, asking us to fully consider the content of words we consume daily and at dizzying speed. On first appearance, the set up was factory-like, the prints being made were to be sold by the gallery. However, this conceptual framework is one of many examples of Tur playing with the broader sociological context within which the work is made. 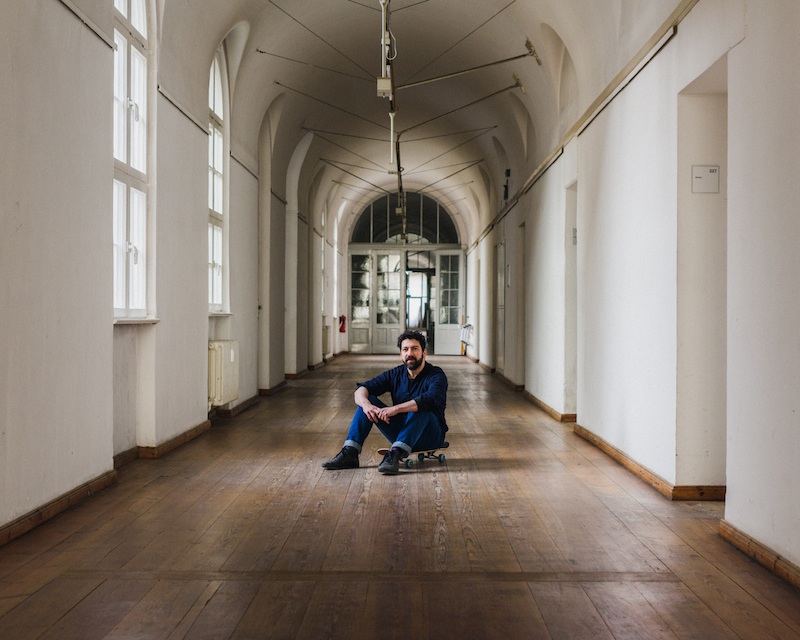 Arriving at the actual studio could not have been more different. A warm, personal space full of crates and boxes, archive material, artworks made from idiosyncratic found objects. Tools, tape, notes to self. Lots of tape. The studio is light and spacious. Having momentarily disappeared, Tur returns hanging up an old skateboard, which he tells me he learned to use simply to navigate the long, lofty corridors of the old Bethanien building. He serves Turkish coffee and sweets while clearing away cups from the previous evening, also spent conversing in the studio. The room has the feel of being both very personal and also very open and welcoming. 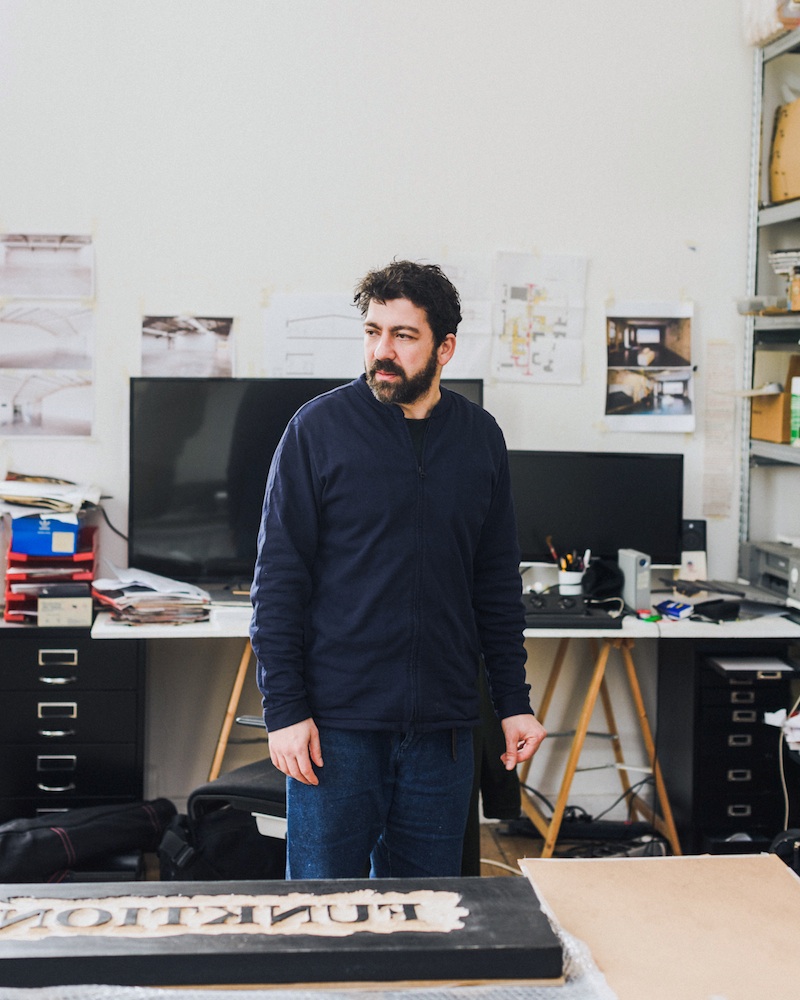 Tur’s practice is broad and multifaceted, frequently crossing the conventional boundaries between the studio, gallery and public space, so it’s easy to wonder what actually happens here. “I meet guests here,” he tells me, “it allows time to talk in calm space. It’s a protected space for me. I have my rituals here, rituals of work. It’s an experimental space, both with materials and thoughts”. Around the room there are fragments of various projects; woodblocks, spray templates, plans. There is a drawing from his number series placed by the far window: a spot where he can quietly act out the ritual of hand-painting these deceptively minimal works. There is no factory feel here. Although he occasionally employs assistants to help with particular projects, the vast majority of the works are made by Tur himself, often drawn or painted in a meticulous and time-intensive process that he describes not only as meditative, but as a way of decompressing from ‘the depressive realities’ he regularly confronts while making works. These numbers—just as the series of photographs ‘Clouds’ (2012)— are in fact highly decontextualised. The former reports numbers of deaths in particular violent incidents from across the globe, such as ‘Caphirizange, Mozambique, 17 November 2016’. The latter are crops of skies taken from newspaper images of scenes of violence; riots, demonstrations, war scenes. The true dystopia of these images has been eradicated, leaving the empty Romantic image for us to effortlessly digest, a sharp critique of the coping strategies we collectively employ to wash over the harshest aspects of reality. It is important to remember that the artist himself has pored through hundreds of these images. What superficially appears as a beautiful, marketable gallery work is in fact a gritty, painful act of confrontation on the part of the artist.

His relentless questioning of how we consume information and our capacity to act upon it, to make decisions, is accompanied by frequent moments of calm and stillness that are also found in the process of making ‘Kapital’, the artist’s previous solo show at Blain|Southern. Defined by a computer program that generated more than 41,000 possible spelling versions of the word ‘Kapital’, Tur literally explored the potential capital of the word. Hundreds of hours of the artist’s personal labour went into the hand-drawn versions of ‘Kaapithaal’, which pave the way for a critique not only of market systems but also of the process of selling artworks, as sales are dictated by the computer program and remove the collector’s ability to choose a specific edition. 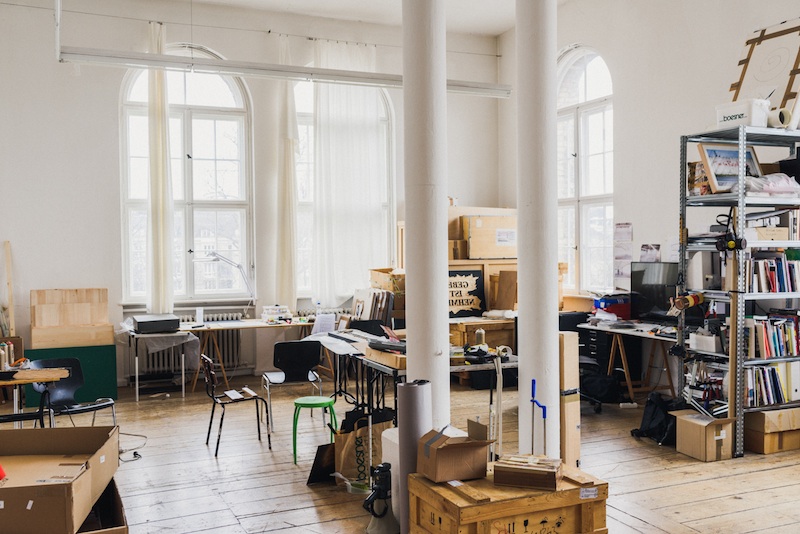 Other works play with this abstraction of words and meanings. In ‘Berlin Says’, words and slogans collected from the walls of Berlin were spray-painted by the artist onto an interior wall of Hamburger Bahnhof, overlaying to the point of reaching the sublime language of colour-field painting. Many key elements of his practice are contained in this work; public expressions of personal thoughts, a slow durational process, the blurring between public space and the gallery. The content is democratic, expressing many different perspectives and views, from religious and political to declarations of love and sometimes plain nonsense. “I combine and contextualise things that already exist in the world: with ‘Berlin Says’ it is kind of a ready-made, but by collecting them I am simply recontexualising these words”. 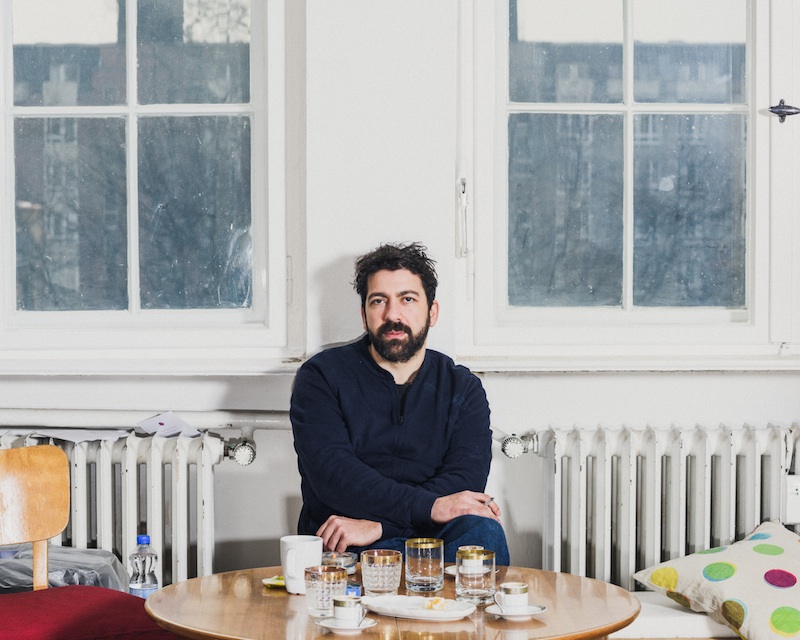 In the studio there is a ‘Demo Kit’ vending machine (2008), which, for the price of the materials, dispenses a readymade demonstration kit, consisting of a spray can and a banner to use on demand. This work is only shown when it’s able to function as an actual vending machine, the host and any subsequent purchasers being responsible for refilling the machine and maintaining its functionality. Not only does the object enable individuals to act and express themselves, but- crucially- it outlines a decision making process. Similarly, in ‘What I Always Wanted to Tell You’ (2007), a microphone on a museum balcony projects the speaker’s voice into the street below, offering the opportunity to make their private thoughts public. In both works, Tur demands that we question our desire and/or capacity to act: “It’s not about what they are saying in the microphone, it’s about the decision. Do I really want to say something? Do I have the courage to say something? Do I have something to say?” 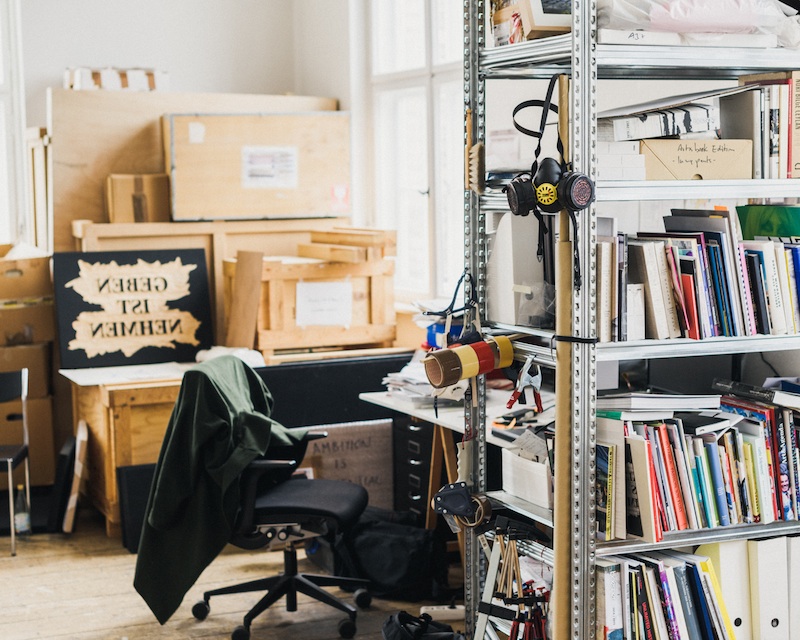 Back in the private space of the studio the artist also performs actions, which have resulted in various performative video works. Whereas many works addresses wider social questions, in some his own presence is deeply personal. He lays himself bare in works such as ‘In My Pants’ (2015), a film work where the artist stands facing us directly for 5 minutes, during which time we become aware that he is pissing in his pants. These moments of letting go, of loss of control, have a powerful emotional directness. There is a drive to reveal, or to be honest about a sense of failure, of personal limitations. Another video series, the 10-channel installation ‘Breaking records’ (2011) shows the artist earnestly trying to break seemingly absurd world records, such as the record for holding the most eggs. The comedic quality is a veneer for a serious portrait of vulnerability and the desire to transcend ourselves, and how we frequently fail to do so. “There are moments where it is very important for me to show myself in a position where I have no protection,” he explains, “It is also important to display myself, not as Nasan Tur the artist, but as Nasan Tur the human”. 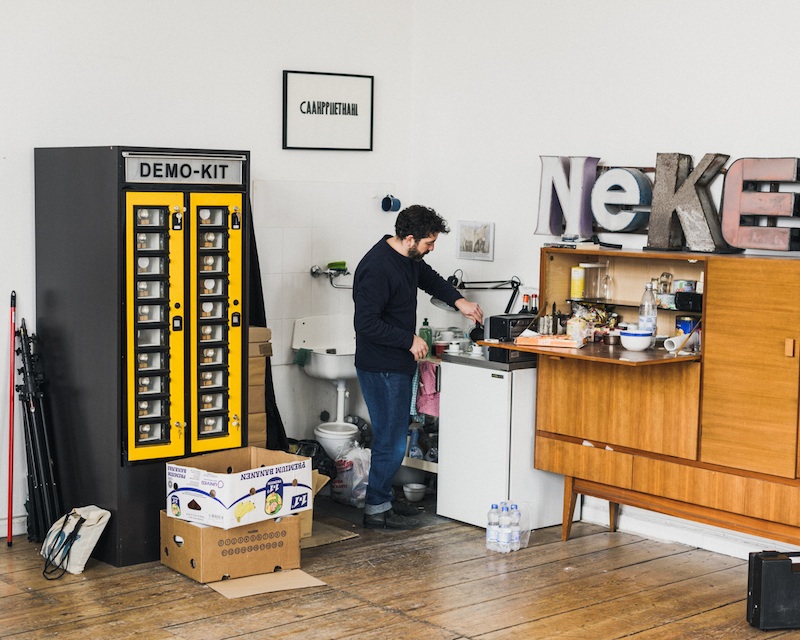 This self-depreciation and humility is antagonistic toward the cult of artistic genius still epidemic in the contemporary art world. “I am not interested in the cliché of the talented artist. I made the decision to do this as a way of dealing with the social body in a way I have not seen before,” says Tur. “I don’t have a strategy, or a particular medium I am skilled in, it is about feelings and how reality grabs you”. 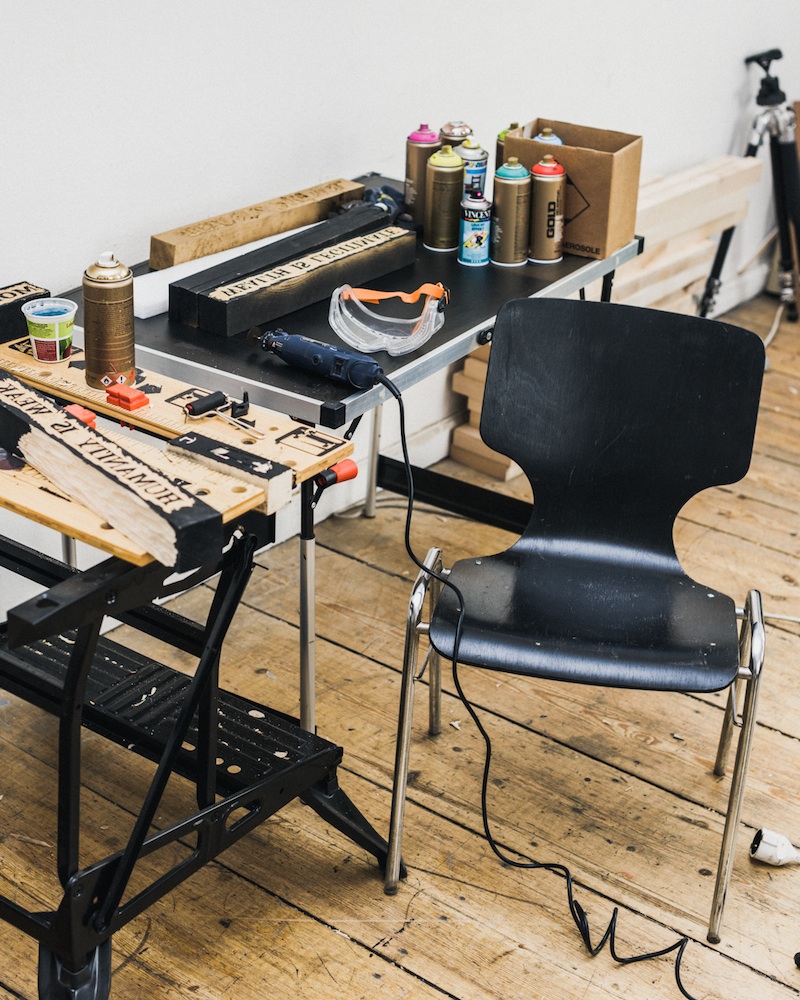 Perhaps the most touching thing is how, from within this sense of self-deprecation and humility, Nasan Tur is so willing to confront the hardest, most fragile aspects of social reality and his own fragilities and failures. Revealing his own weakness is a courageous form of criticality, as in doing so he asks whether we are brave enough to question ourselves, both as individuals and as actors within society. What actions are you willing to take? How real are you prepared to be?

He explains with disarming ease: “Sometimes you are confident and sometimes you lose your confidence. This critical questioning of what you are doing is very important because, in the end, I don’t want to do things that are not really deeply and honestly what I want to do.”

Rebecca Partridge is an artist and writer based in Berlin. rebeccapartridge.com