After opening to the public in March 2016 in Los Angeles’ rapidly changing and commercializing Arts District, Hauser Wirth & Schimmel has introduced a new exhibition, ‘Jason Rhoades. Installations, 1994-2006’ running from February 18 to May 21. The gallery, which has roots in Zürich but locations in London, Somerset, and New York, occupies an expansive historical flour mill complex. Other spaces included within are ARTBOOK, a store for Hauser & Wirth’s Publishers’ Book & Printed Matter Lab, and Manuela—a new restaurant focused on a seasonal menu, and a sizeable garden. The diverse program and activities provided on the premises are a testament to the city’s increased demand in the area for densification, epicureanism, and profitable bohemianism. 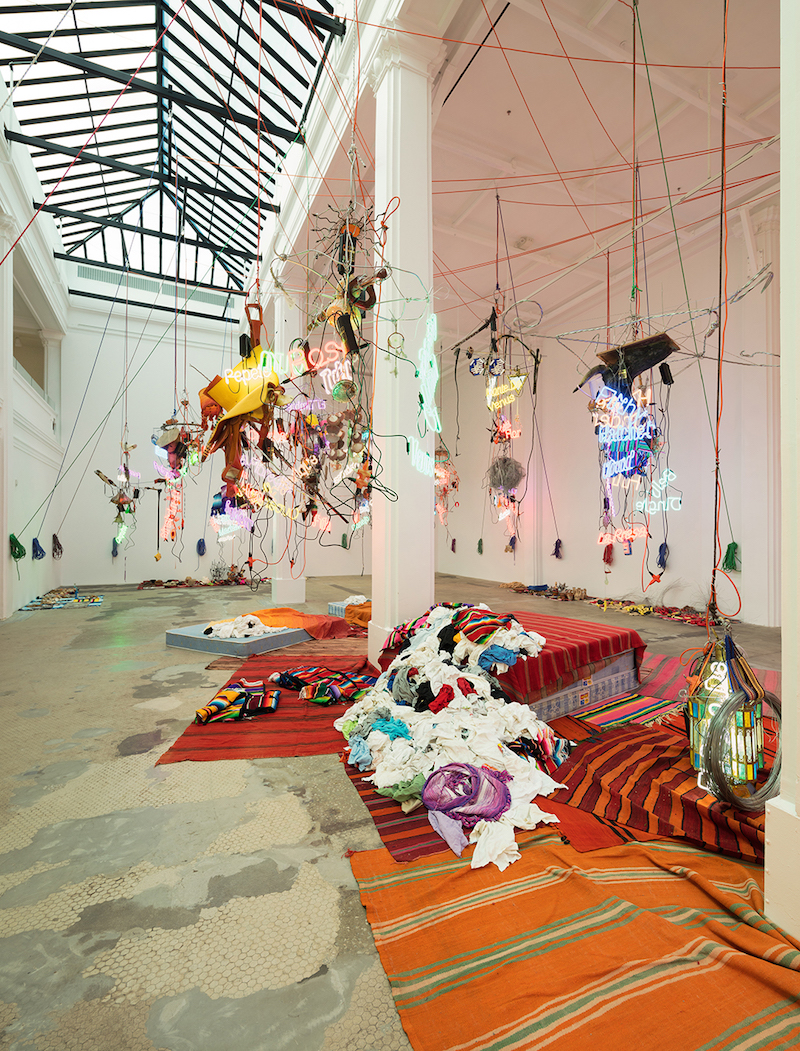 When scaling the stairs to the entrance of the Hauser Wirth & Schimmel complex, the first exhibition space to the immediate left comprises the gallery’s most striking and lofty component, fully embracing the interior’s overhead skylight that allows for a gush of natural light to flood below. The floors have also maintained much of their integrity, with sections of original mosaic work peeking through, reminiscent of the archaic and fading handiwork on floors and walls of ancient Roman baths. This part of the gallery hosts the first installation of six that encompass the Rhoades exhibition. 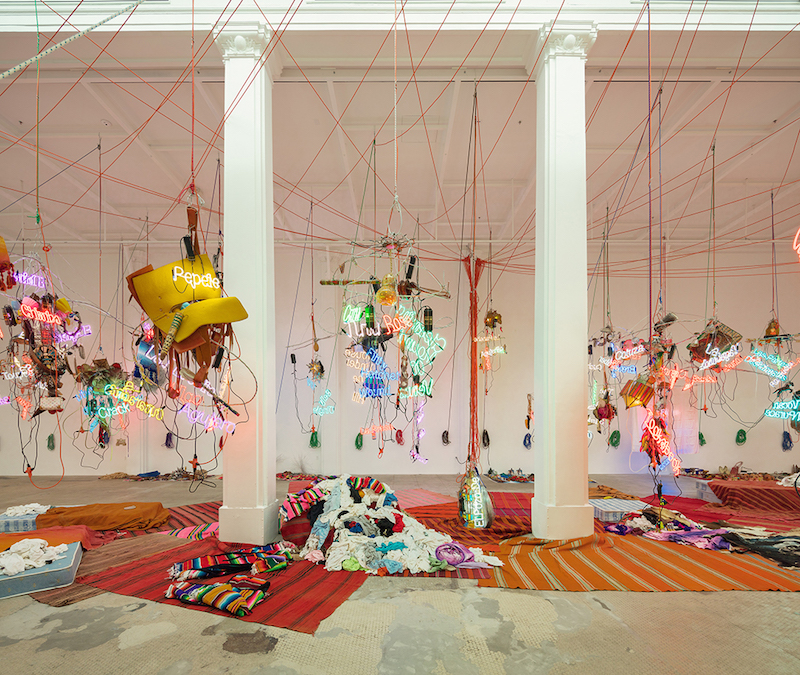 In ‘Tijuanatanjierchandelier’ (2006), a chaotic scene of various Moroccan hanging lanterns, hand-made instruments, maracas, and neon signs shaped in English and Spanish words for female genitalia are assembled into floating clusters throughout the space. Above, a tangled network of ropes suspends the fixtures in air and orange extension cables power the neon signs, creating a separate soaring sculptural space that is reminiscent of telephone lines. Sections of the gallery floor are covered in blankets with more souvenirs and trinkets, of the kind that one might see at a marketplace for tourists. Does the success of the installation lie in its ability to channel a sense of bewilderment and otherness in the visitors by recreating a seemingly life-like bazaar or marketplace, made evident by the viewers’ incessant and almost overwhelming use of smartphones to document the curious assemblages of foreign objects? Or is it rather highlighting Rhoades’ capacity to uncover tourism’s commodification and exploitation of cultural artifacts by seamlessly blending and neutralizing the objects’ meanings and origins? 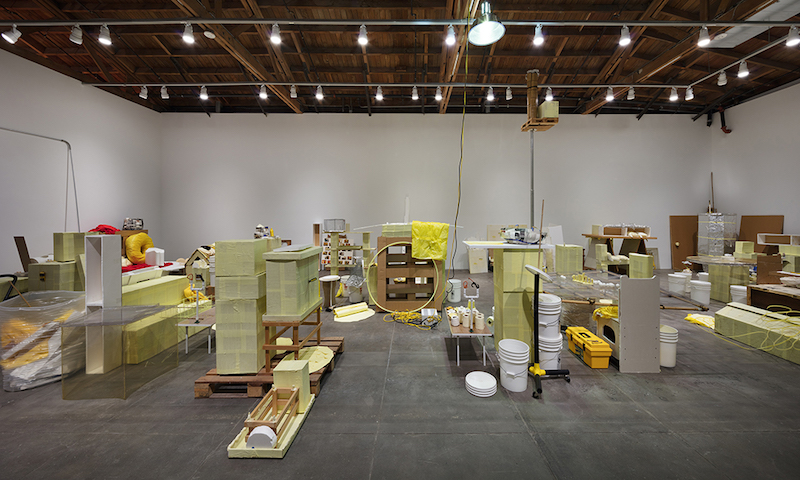 From here, visitors make their way out of this space, past Manuela, and through the main courtyard into the second next zone of gallery spaces for the next five installations. A more traditional compartmentalizing of space is evident, adhering to a template more like that of a museum, with each installation occupying a single room. In this area, assistants allow only a certain number of visitors per viewing, hoping to emphasize the sense of grandeur each installation emanates.

‘Swedish Erotica and Fiero Parts’ (1994), which was first shown at Rosamund Felsen Gallery in West Hollywood, consists of yellowish cardboard boxes, buckets, various coffee tables, yellow ceramic cups amongst other miscellaneous items. In creating pathways through these various objects, the viewer thus participates in an activity, like rummaging through a garage sale, excavating junk in search for that potential bargain. 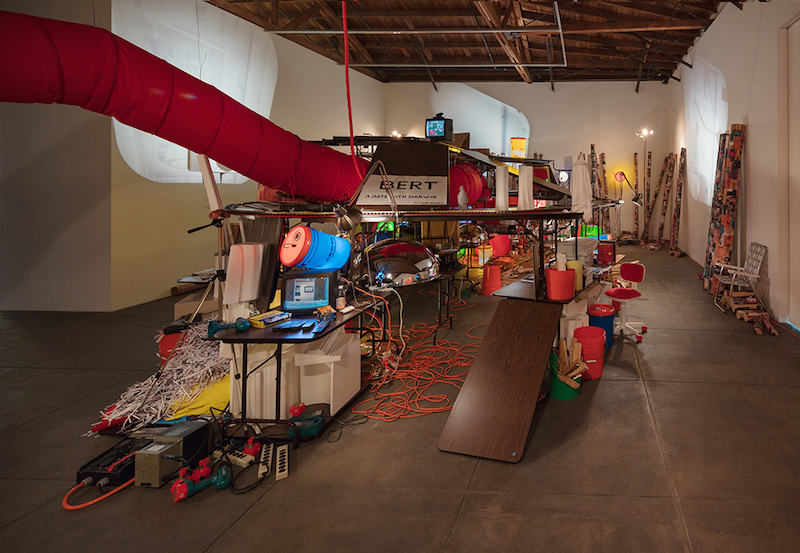 In the adjoining room rests ‘Creation Myth’ (1998), a cacophonous maze of ephemera and gadgets that congregate to serve as the artist’s mind, re-imagined. Whimsically, the brain, thought, and information are all assembled in such a way that, like previous installations, visitors are encouraged and almost forced to walk through and investigate the various matter present. In the case of ‘Creation Myth’, the viewer is confronted with Rhoades’ rambling, if not irreverent, mind. Piles of foldable tables coalesce as the artist’s brain, while a toy train follows a circuitous path around the assemblages, representing, sardonically, Rhoades’ ‘train of thought’. Lastly, information—in the form of endless cut-outs of pornography, video game consoles, and real-time surveillance video recordings—circumvent the ‘brain’. In another corner of the room, a large antiquated smoke machine—which Rhoades imagined as ‘the Asshole’—bellows, perfectly-timed and shaped smoke rings that quickly travel almost the length of room, only to disappear in a fleeting moment. The automatic deployments of smoke, functioning CCTV cameras, and operating train, most of which are powered through electricity, lend agency to the piece. It appears a moving and even breathing apparatus, thus immortalizing Rhoades’ imagination, even after his untimely death in 2006. 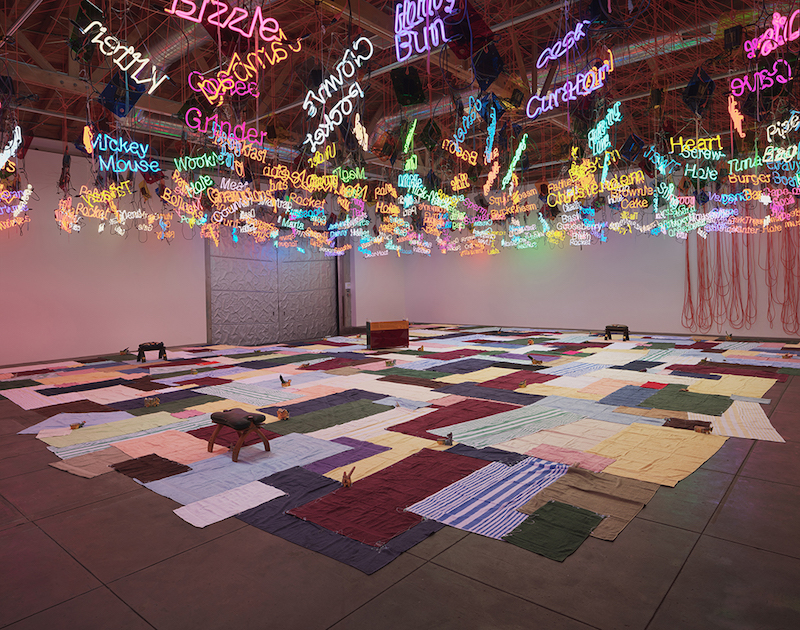 Two spaces over, ‘My Madinah. In Pursuit of my ermitage…’ (2004), acts as the final installation in the Rhoades show. In keeping with his notorious predilection for taboo and knack for the controversial, this installation manages to juxtapose the sacred with unsavory worldly desires. As a makeshift mosque, the space is rendered holy, and as a space in which to pursue Rhoades’ ‘ermitage’ (hermitage acting as a place of solitude, but also referencing the famed museum in Saint Petersburg, Russia), it serves as a self-reflexive retreat. A patchwork of rugs is placed on the ground where guests are invited, sans shoes, to relax. However, what hovers directly overhead compromises any sense of reverence or sacrosanctity below. Neon signs of ‘Pussy Words’, as Rhoades called them, populate the ceiling above. These 240 varied slang terms for female genitalia are employed and advertised like beer brands on a liquor store window. By having these words physically elevated above the visitors in this so-called ‘mosque’ or ‘ermitage’, Rhoades exalts the vulgar euphemisms, illuminating the space below and relinquishing its holiness.