Organised by IFEMA, ARCOmadrid presented the 36th edition of their International Contemporary Art Fair. The renowned fair hosted works from 200 galleries, ranging across 27 countries, in the heart of the Spanish capital. As well as the appearance of major galleries featuring the work of Anish Kapoor, Jenny Holzer and Ai WeiWei, special attention was given to smaller and upcoming galleries. 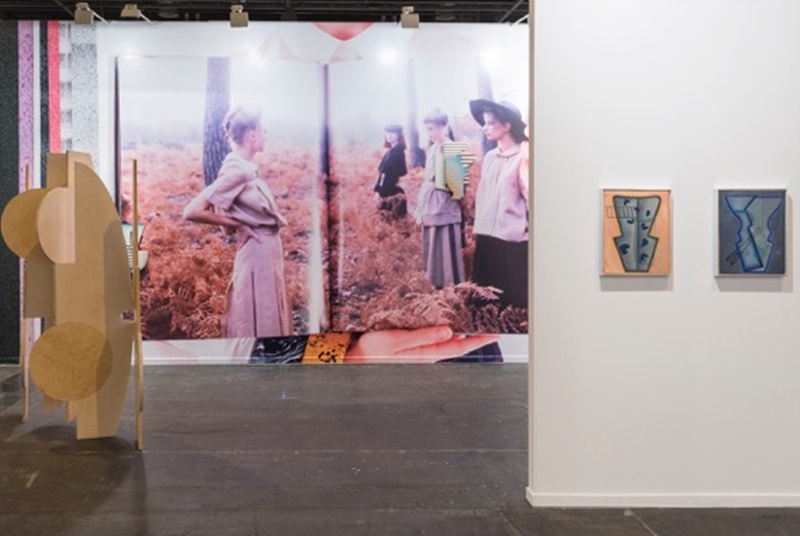 Across five days, a selection of international art presentations, performances and installations took place, flanked by this year’s special partnership with Argentina, who were welcomed as the official guests of the event. Inaugurated through the Argentina Plataforma/ARCO programme, twelve Buenos Aires-based galleries and artists were selected by director and curator, Inés Katzenstein to take part in the platform’s curated programme. In addition to the 164 galleries in the General Programme, the ‘Openings’ section, curated by Juan Canela and Stefanie Hessler, presented 18 young international galleries with a maximum existence of seven years, and the ‘Dialogues’ section brought forth 12 international galleries. These specially-curated platforms allowed the ‘Openings’ galleries to showcase undiscovered new work from a selection of exciting young galleries around the world, as well as allowing each ‘Dialogues’ gallery to present two artists, forming a dialogue between their works.

Special mentions extend towards young ‘Openings’ galleries such as MAMA Gallery (Los Angeles), who featured paintings by Mattea Perrotta, as well as Newcastle and Dusseldorf-based gallery Drop City, who were announced as the Winner of the opening ceremony this year. Drop City presented two artists Eleanor Wright and Nadia Hebson, whose booth and exhibition was regarded as one of the best in the programme’s opening. In ‘Dialogues’, highlights included Mexico City’s LABOR, who presented works by Irene Kopelman and Jorge Satorre, and New York-based Tanya Bonakdar, who exhibited Tomas Saraceno‘s architectural spider web artworks.

With a wide array of artists making their debut at ARCOmadrid, this year’s fair programme was also supplemented by several stand-out exhibitions throughout the city. Here are the five Berlin Art Link exhibition favourites from Madrid this year. 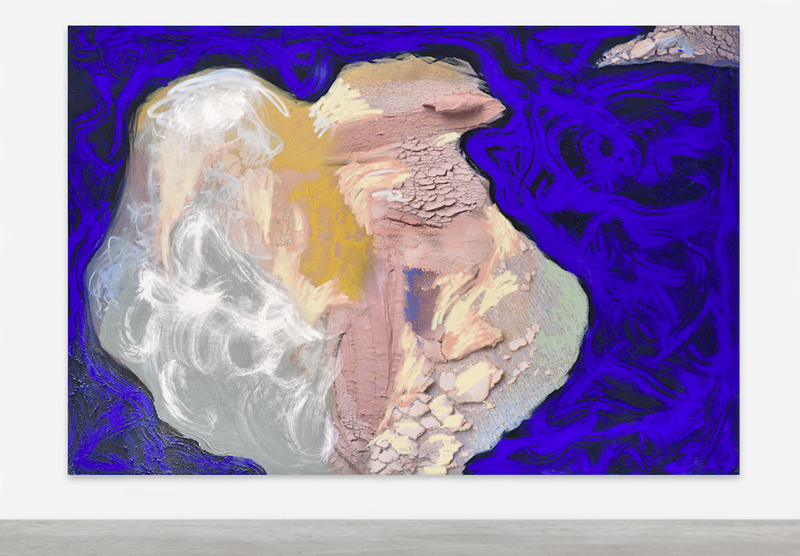 ‘Lengua de Bartonlina Sisa’ is the first Spanish exhibition by Chicago-born artist Donna Huanca. After successful shows in London and Berlin, Huanca continued her work with raw materials and the art of movement, through motif colours of blue and purple. Exploring territories related to the human body, including gender, image and space, Huanca’s performers—painted head to toe—gracefully moved among the installed work. Their camouflaged bodies represented the overlap in art disciplines that the artist practices: her mixed-media approach, combining sculpture, performance and painting, ultimately points to fragmented ideas around identity. Although brightly toned, the charred and ripped synthetics give a slightly dark and personal layer to the work. 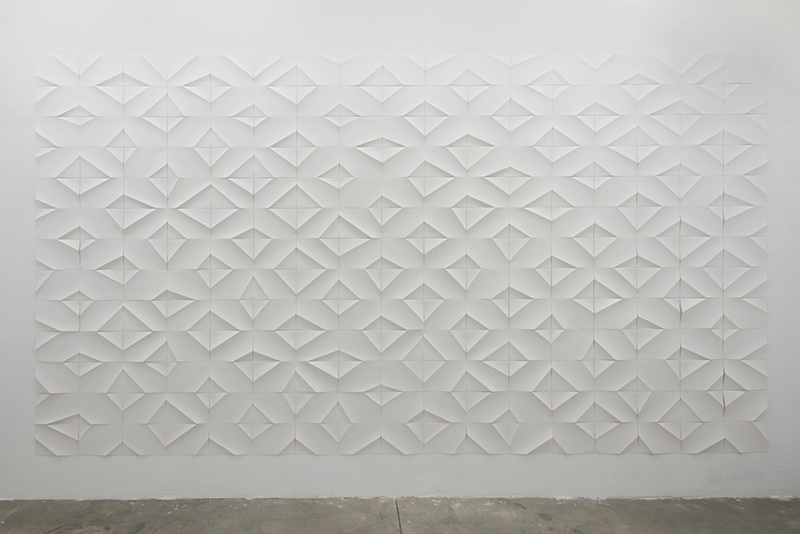 Soft and patient are the words that spring to mind when discussing Igancio Uriarte‘s new exhibition, ‘Tipología de dibujo escultórico’. The collection showcases a series of drawings that undertake sculptural dimensions as part of their composition. Through thinly-lined strokes and repeatedly folded pieces of paper, each work represents shapes; both the rule and precision of its composition as well as their inherent arbitrary nature. Through the use of light and shadow, the exhibition considers the filling and emptying space, and its effect on interpretation. Due to the 3D-like structure of the work, audience participation and inspection was highly encouraged and, in fact, integral to understanding the incredible craftsmanship, design and imagination that went into the curation of this work.

‘It’s all True’ is the first major survey of Bruce Conner‘s work in sixteen years. The retrospective gathered over 250 works spanning across his five decade career. His early raw material-based installations in the 1960s juxtaposed his digital and media-based practices in the mid-late 2000s. Over the years, his work gained notoriety due its cyclical themes of American violence, politics and community issues. As his work frequently changed medium, the exhibition is a full examination of Conner’s role in challenging genre and style. Initially shown in San Francisco and New York’s Museum of Modern Art, the exhibition now has its residency in Madrid.

Since the 1990s, Julian Rosefeldt has been producing film and video installations looking into stereotypes, cliches and repetitive patterns within communities. ‘Deep Gold’ is part of the the anthology series ‘The Scorpion’s Sting’, which drew inspiration from the surrealist work of Luis Buñuel. As though it were a response, ‘Deep Gold’ re-imagines Buñuel’s 1930 film ‘L’age d’Or’ and invites viewers into a world of female sexual supremacy, where male desire is overshadowed. Looking into the heart of German society, the film produced four photo installations highlighting the underground world of sexual and personal exploration. Through the complexity of multi-screen installations, Rosefeldt’s film carries with it theatre, satire and a crude commentary on everyday life. 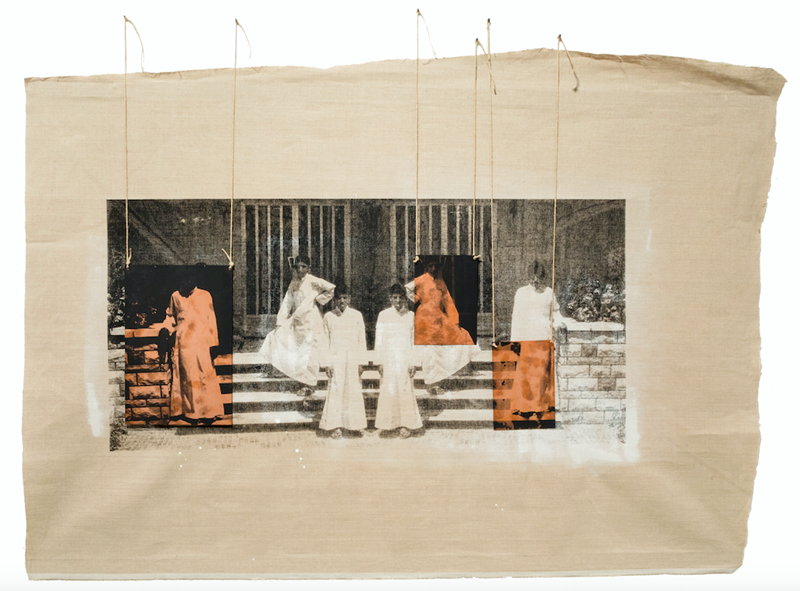 Manal Al Dowayan: ‘The Boys’, 2015, paint and silkscreen ink on canvas and copper // Courtesy of the Artist and Sabrina Amrani

Saudi artist Manal Al Dowayan‘s first solo show in Spain, ‘And I, Will I Forget?’, is a beautiful collection looking into personal memory. The chrome slides presented are taken from her father’s life in Saudi Arabia and his journey to the United States. Through these static images, Dowayan tells dynamic stories, navigating her own life through the vision of a loved one. The title of the exhibition takes guidance from her father’s Alzheimer’s diagnosis and his growing inability to recognise the people, places or time within the images. In some way, the exhibition deals with formlessness and the credibility of the invisible. The exhibition is a wonderful overlap of ethnic, social and personal histories.