In line with KW‘s vision to create a programme investigating dialogue as political acts, Adam Pendleton‘s exhibition ‘shot him in the face’ is an attempt at dealing with the complexity of language, by quietly addressing the intricacy of overlapping and intersectional identities. 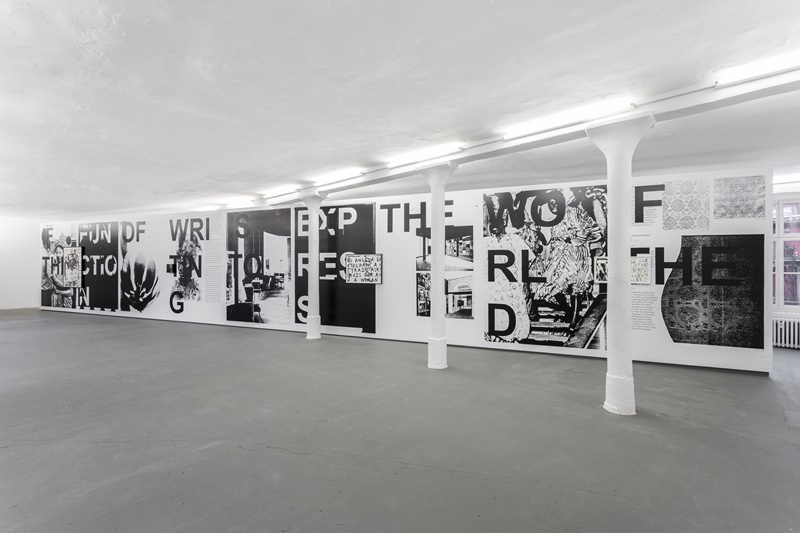 Adam Pendleton: ‘Shot Him in the Face’, 2017, installation view // Photo Frank Sperling, courtesy of the artist

The exhibition is constructed of interpersonal, black-oriented, literary and social movements. Even though the presence of black people is impressive, their significance within Pendleton’s exhibition is either downplayed or ignored. Although it is not always necessary to discuss race within one’s art practice, this exhibition would have benefited greatly from confronting these themes head-on.

One cannot ignore the inclusion and references towards black writers and scholars. Even in the lead up to the opening, much attention from KW was given to Pendleton as an African-American artist whose prior exhibitions have also circulated on themes of political language, namely the growing Black Lives Matter movement. Simplifying the inclusion of racialised bodies makes their presence within the work obsolete and, furthermore, promotes a mixed message regarding what his work wishes to address.

Although he had a busy schedule ahead of him, I managed to catch up with the artist to discuss some of the motives behind his work. 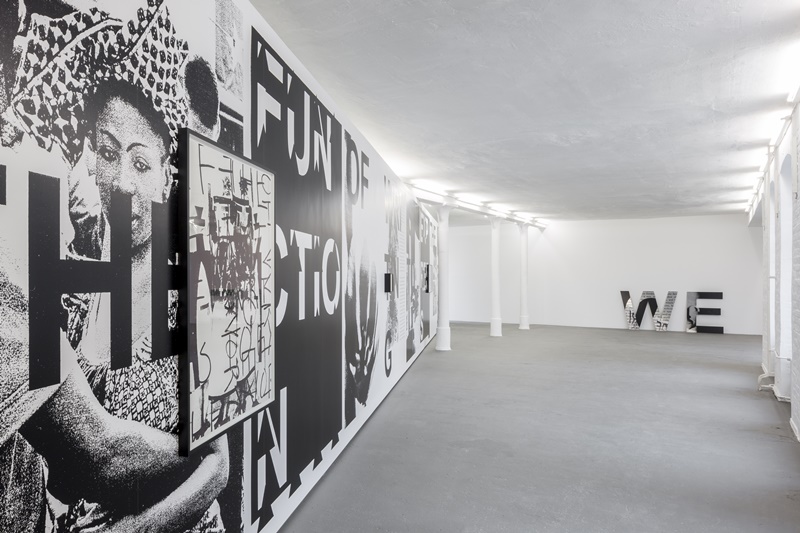 Adam Pendleton: ‘shot him in the face’, 2017, installation view // Photo Frank Sperling, courtesy of the artist 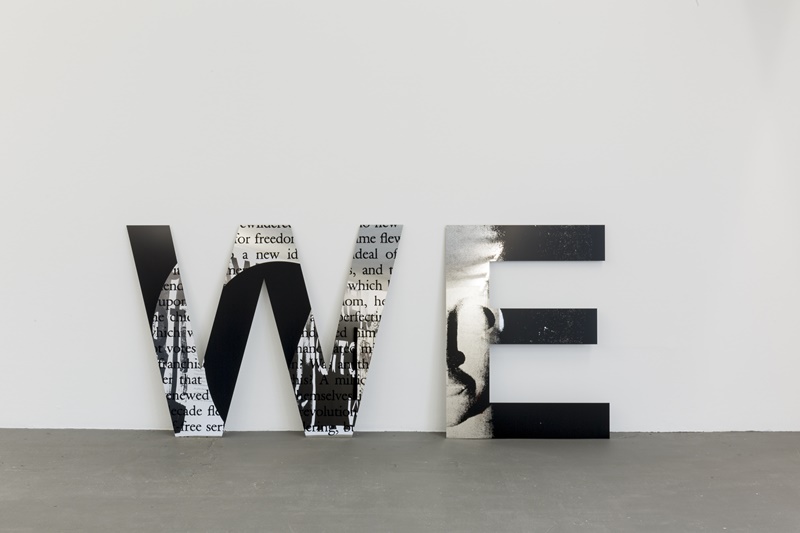 Adam Pendleton: ‘WE (we are not successive)’, 2015, installation view // Photo Frank Sperling courtesy of the artist and Pace Gallery New York

Candice Nembhard: Your latest exhibition at KW is entitled ‘shot him in the face’. Can you tell us a little more about your reasoning behind the title?

Adam Pendleton: It’s a line from ‘Albany’ the poem by Ron Silliman and there are other lines from that text that are referenced in the exhibition. It was also a way of playing with expectations because I think ‘shot him in the face’ suggests one thing but the exhibition is something else.

CN: “If the function of writing is to ‘express the world’…” is the first line of Ron Silliman’s poem ‘Albany’, which you’ve taken and formed into your latest installation. If we take this statement to be true, what, then, in your opinion, is the function of art?

AP: Well, I don’t take the statement to be true. For me there’s a critical aspect to the statement; it’s not affirmative. It’s not being used to suggest that [expression] is the function of writing; that is, to primarily express the world. I think there’s something unproductive about that idea. So it’s a question: the function of writing is to… what? Is to complicate, pervert and so forth. You can fill in the blank, which is what I’m suggesting in the exhibition. It’s not an affirmative gesture at all.

CN: Given the text-based nature of your work, poetry and language has often grounded your creative pieces. Alongside the title ‘artist’, do you consider yourself an editor?

AP: Yes, in the sense that there’s a degree of specificity at play in the work. It’s involved with and engages processes of editing. Being critical about what one is referring to in the way those relationships are created and structured. 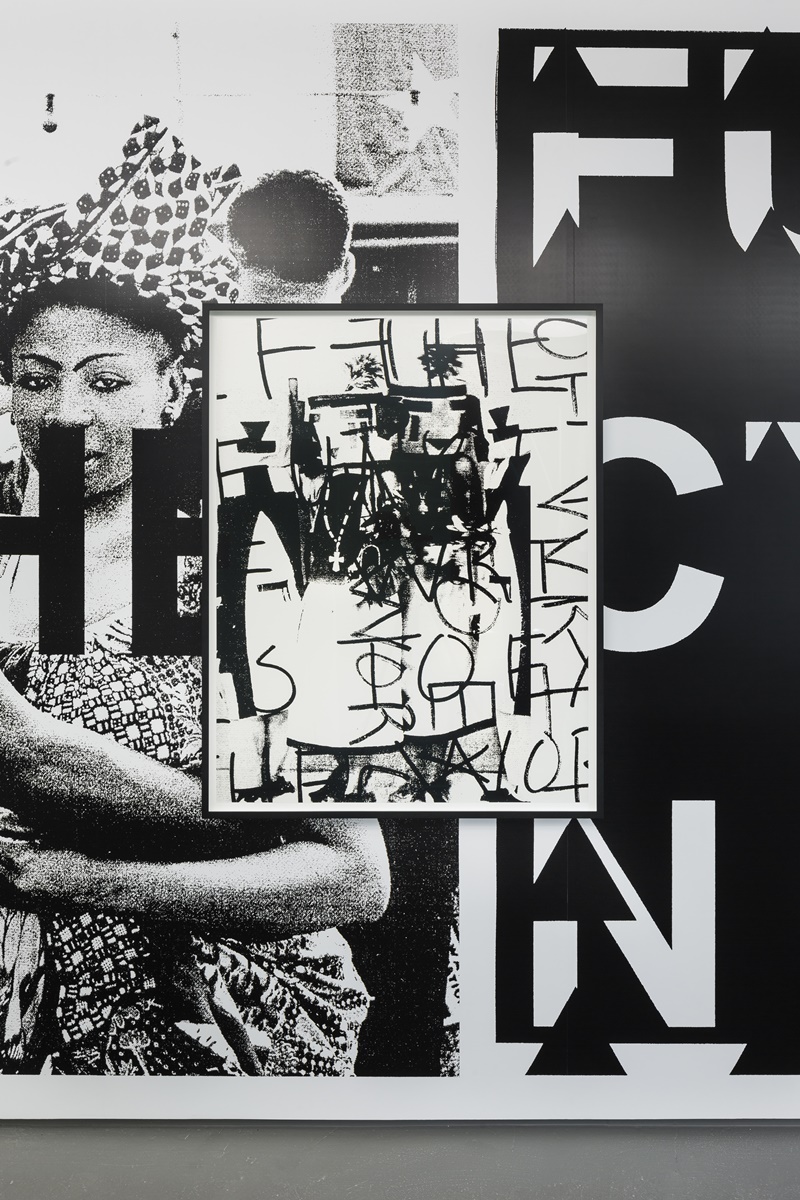 Adam Pendleton: ‘IF THE FUNCTION OF WRITING’, 2017, detail // Photo Frank Sperling, courtesy of the artist and Galeria Pedro Cera

CN: Coming into contact with your work, I was inherently surprised by how clear it was despite its highly conceptual basis. Thinking purely about colour, black and white is often associated with clarity and accessibility. Can you tell us more about your decision to work in monochrome, in conjunction with using conceptual ideas that aren’t so black and white themselves?

AP: A monochromatic space is fully-loaded, I would argue. I’m playing with degrees of legibility and illegibility. In that regard, ideas of abstraction. So, it’s really not about making things clear or unclear, it’s actually about acknowledging the inherent complexities that are always at work.

CN: ‘Black America’ has often been at the core of your work; more recently, the Black Lives Matter movement has made several reappearances. Given the severity of cases such as Trayvon Martin’s and your salutes to famous black Americans, is there a danger in racialising your art by prefixing it with ‘black’ or ‘African American’?

AP: No, I don’t think there’s a danger because that’s not what I do. I refer to many things, so a limited or simplified perception or read of the work would have more to do with [understanding] ‘that’s not my burden’, in other words. The work creates quite a capacious space and I aim for it to exist in the world, in the broadest sense possible. So I can refer to many things, going from W.E.B. Du Bois to Gertude Stein to [Jean-Luc] Godard to Adrian Piper to Joan Jonas; there can be these art historical references that exist in relationship to each other. It’s fully-loaded. 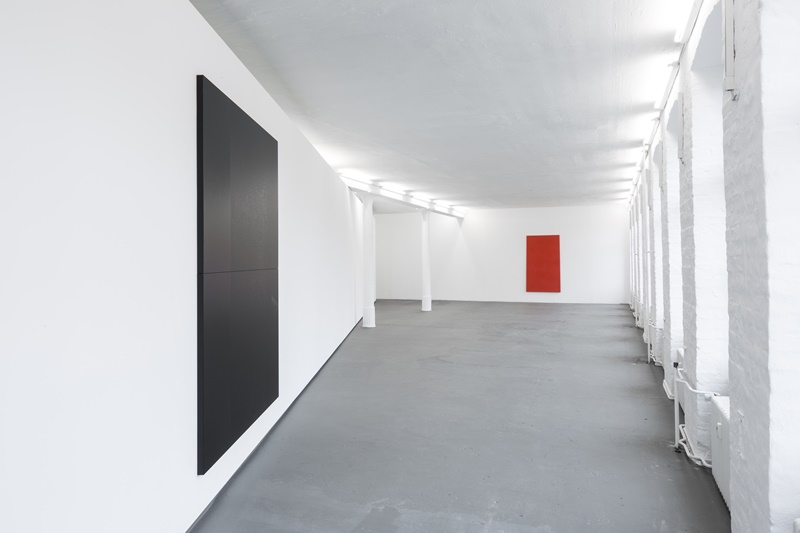 After our brief interview, I began to think more of Pendleton’s influences and how he utilised them. In drawing ideas from Black Dadaism, W.E.B. Du Bois, Angela Davis and numerous others, the artist simultaneously unifies and marginalises the space with the construction of a mounted billboard, hosting a series of posters advertising grainy, monochrome images of Congolese and South African figures. Shrouded by text, their xeroxed identities are interwoven among broken and reassembled stanzas; ‘The New Sentence’, a sentiment introduced by poet Ron Silliman, exemplified in his poem ‘Albany’, whose first line is featured in the exhibition.

What feels uncomfortable, if not confusing, is the artist’s goal of keeping his work accessible, despite the specificity in his use of black figures and black-oriented ideas, including his intention of exploring conceptual ideas of black Dadaism. In a space that does not usually accommodate black voices, these potential narratives, although multifaceted, are stakeholders in diversifying and refreshing exhibition spaces.

It is also within this reflective space that I think of the monotony of many art institutions and what ‘shot him in the face’ could have served in promoting black people and black artists. Despite its aesthetic value, extensive research, and carefully-curated setting, ‘shot him in the face’ left me with more questions than answers.