The interaction of history, myth and fantasy have long been key subjects in the filmic practice of artist Louis Henderson. His film, ‘The Sea is History’ (2016), taking its title from a poem by the British-St. Lucian Nobel laureate for literature Derek Walcott, was screened this year a transmediale. This interview explores the way the concepts of reality and fantasy interact, inform, and retreat from each other in Henderson’s work. Though his films are frequently grounded in the idiom of documentary, they are infused with an ambivalence about the accessibility and nature of truth or reliability. Some films, particularly ‘Black Code/Code Noir’ (2015), have proven controversial, but Henderson views his practice as an exploration of the ways in which the myths we create come to define us, even to haunt us. How these material consequences of mental events play out is among the most urgent questions of the moment, as words like “post-truth” and “alternative fact” enter the political lexicon. I spoke with Henderson in Kreuzberg after the transmediale screening. 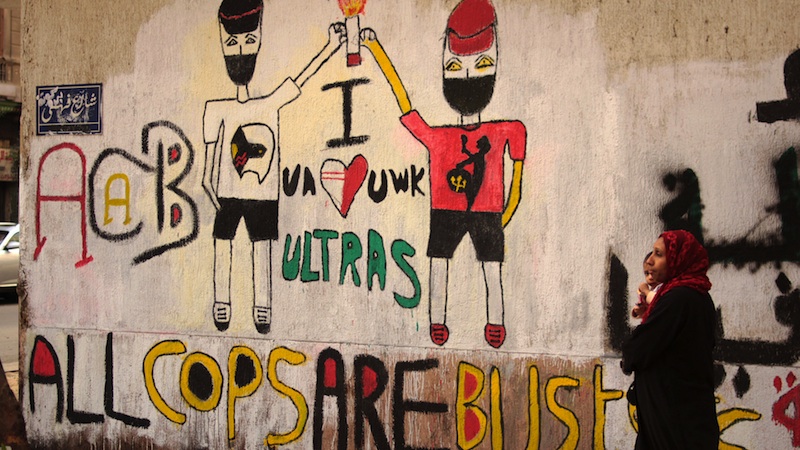 Louis Henderson, still from ‘Logical Revolts’, 2012 // Courtesy of the artist

William Kherbek: I wanted to ask you about the interaction of fantasy, myth and reality in your work. There are moments in ‘Logical Revolts’ (2012) of trying to figure out the truth of a situation. As film can be a medium for expressing a kind of essayistic take on reality or creating a fantasy world, could you speak about the way that tension plays out in your work?

Louis Henderson: I when I was first making work, I was super keen on this idea that perhaps documentary could be treated as a genre of fiction, and that that could open potentially more interesting possibilities for asking questions about historical or political situations. What that meant for me, quite simply, was rather than treating film as a medium for reporting or communication, it was actually a medium for creating new forms and new ideas.

The idea was more about trying to play with the malleability of everyday reality. For me, it was also about finding images that were already existing, and, through narration, to begin to develop a fictional base for those images. During the editing process is when I write. I never write before shooting, except a very basic conceptual idea. 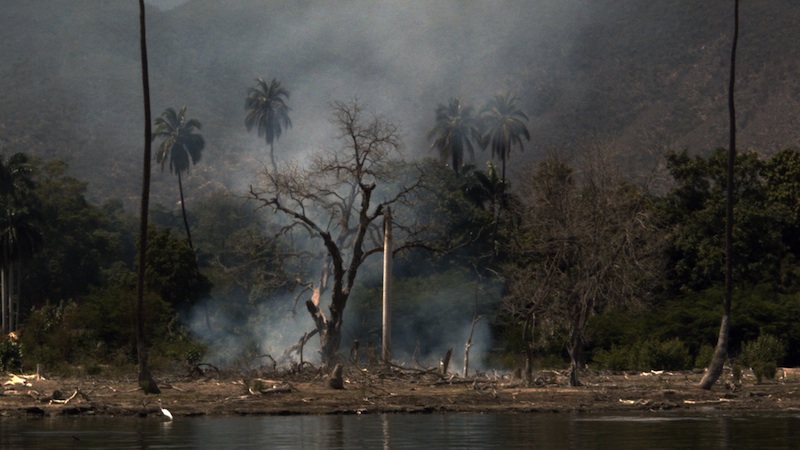 Louis Henderson, still from ‘The Sea is History’, 2016 // Courtesy of the artist

WK: Your new film, ‘The Sea is History’, is set in Haiti, where a population has been kidnapped, stripped of their mythologies, their histories and their cultures. Thus, Haitians have had to forge a new identity of their own. Could you speak about the ways in which myth and identity inform each other both in your work and in the daily experiences of the cultures you’ve observed in creating your work?

LH: Perhaps this question relates to my interest in archeology as a methodological approach to my research and my filmmaking practice, in that archaeology is such a strange practice when you think of it, especially from a European perspective. In my early works, I’m using archaeology as a method for interrogating colonial histories, because we can understand archaeology as something deeply bound up in the European colonial project, but, also, in its search and desire to locate origins behind what would essentially be understood as cultural myths, it is also colonialist in its attitude.

My grandparents, for example, were both archaeologists and they did research in the central regions of Ghana looking into animist myths about a sacred forest. They were doing archeological digs in this area to try and find the cultural remains, because within the mythology of this region in Ghana, the Ashanti people believe that this is where their ancestors rose from the ground, being born like trees, coming up through the earth’s surface and, then, the archaeologist comes to dig those surfaces up, not literally searching for those roots, but if we think about it in more expanded terms, that is actually kind of what they’re doing: trying to find the origins of that myth. When I spoke to my grandmother in Ghana, the way she speaks about it, it’s still very much shrouded in mystery. And this fed into my work, ‘Lettres du Voyant’ (2013). I’d learned about this work, you could call it a cultural myth, of these guys doing these internet scams mixed with vodou mythologies, and I went to Ghana almost in a falsely “ironic” way to uncover some truths about these myths. And, once I got there, people are very reluctant to speak about this, because this is part of their contemporary myth. They’re not going to say “this is really how it works”. This whole search for uncovering some truth, was completely foiled. And that led me to completely remodel the reality I had been confronted with, into this fictional story that doesn’t really give us much about the original myth but probably deepens it.

WK: In ‘All That is Solid’ (2014), you explore the ways in which the infrastructure of the cloud is obscured and the colonial, social and economic relations that underwrite it are elided. Could you talk about how you explore these obfuscations in the film and how a kind of “fantasy” version of the cloud pervades discourse around it?

LH: I’m thinking about these scenes in the film where I make a sort of associative montage, between an advert from Apple, which is one form of reality as such—an imagined, mythologised, deeply falsified form of reality—but it’s also a reality for some. The Apple advert is of a white, American, upper-middle class family and they all have iPhones and iPads and they’re all hyper-connected, and Mom can take junior to the football game, and she can take pictures on the iPad and send them on the cloud to Dad, who’s working. I montage that with the realities of the heavy labour in this waste ground in Ghana, of workers stripping the computers back to take out some metal. When I showed that film before, someone in the United States said they found that sequence particularly disturbing because of the way they felt I was adding to the abjection of the African continent, in showing this, but for me the intention was in some respects to show either side of the same image. For me, it was this idea of trying to reveal what might be underneath a reality that’s being presented to us. In that respect, that is where this idea of the cloud came in. I felt that was part of a capitalist mythology that was being pushed around at the time of the development of the cloud. Even the word “cloud” will show you what kind of myth is being presented to us. I wanted to try to defeat that fluffy dispersed lightness to say that no, underneath this is a very heavy mineral-based process of labour and extraction. 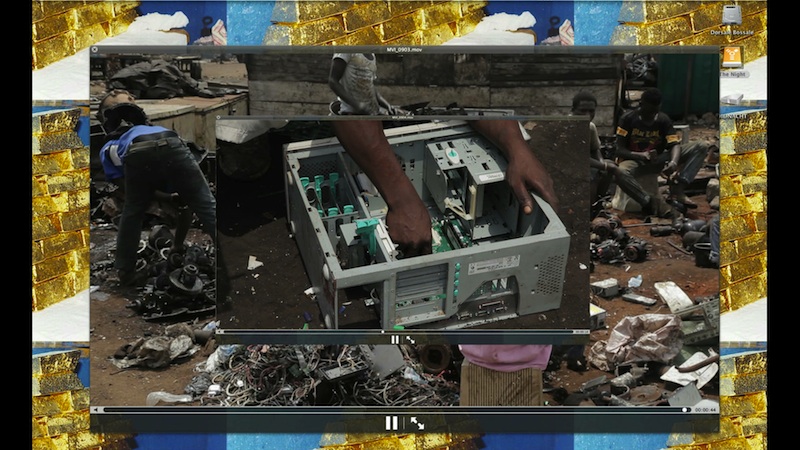 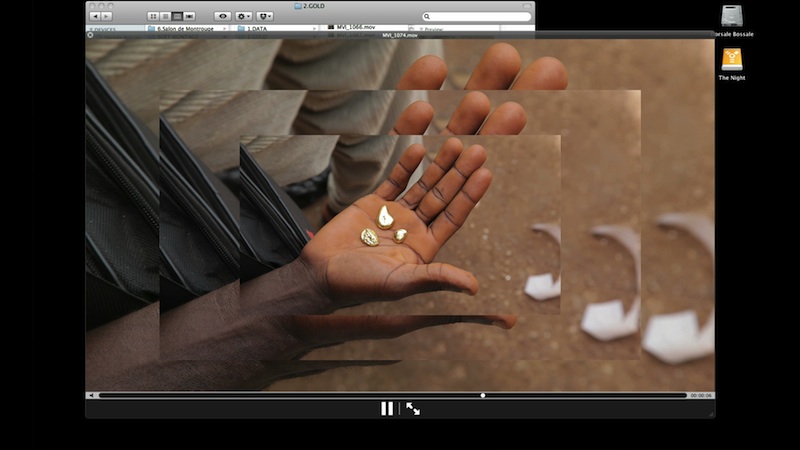 Louis Henderson, still from ‘All That is Solid’, 2014 // Courtesy of the artist

WK: ‘A Walk with Nigel’ (2010-11) opens with the phrase “A walk with Nigel is to see the inanimate as animate”. This is a prerogative of video and film, to create the real world as a dream world, and I’m wondering how you see that line as epitomizing some aspect of the film itself but also what it means in terms of your own larger practice?

LH: That phrase is actually a quote from Peter Smithson, who is one half of the architectural practice, Alison Peter Smithson, who were very important in shaping what we now call Brutalism. That’s a quote about my great uncle, whom the film is about. That phrase was for me the starting point of understanding how I could make a film as a basic understanding of the movement between photography and moving image. What is more interesting for me is not just about animating photography, but also bringing things to life. The way that relates to me, and my great Uncle Nigel, and of walking, was in looking at the way that he was looking, for example, at the material remains of a society and the material culture of his neighbourhood. Through his photography, and his collage, he pieced those fragments together to make a fictional world. This relates to my own interest in archeology, which I have said is a kind of “animistic” practice, in that it deals with these material remains and cultural artifacts, and the archeologists bring them up from the soil, and place them in a particular frame, and through collage and assemblage, they start to try to understand that these inanimate objects have the power to speak their own history.

WK: There is a scene in ‘Black Code/Code Noir’ of the CGI modelling of a police shooting. In the film, there many images of actual police violence and this juxtaposition could be controversial for many people, this clean representation of a brutal process. I’m wondering if these digital models, attempts of a kind to reproduce the real circumstances of something, are doing it in such an idealized way, so removed from the experience, that it can become meaningless. How did you think about that tension in creating the work?

LH: That brings up a lot of things I’ve been thinking about more recently. Particularly, the use of CGI in a documentary process. For example, what does it mean to use CGI images as “evidence”, as “representation” and as “fact”? In the case of that film, that footage was something I actually found on Youtube. It was a very strange piece, I think it had been made by some police department but it was not used as evidence or in the trial of Darren Wilson, but I think it was used as a kind of model to show what could have happened according to the testimonies. Lately, I’ve been working on a project concerned with the following question: how could CGI—understood as a modelled form of mythology—might open up political possibilities to counteract very embedded narratives? In the case of ‘Black Code/Code Noir’, that’s not really how that model is used, but it’s more the imagery that comes later, where we start to actually enter into the screen and the images start to break down, and, in that space, we start to open up history in a different sense.