Lena Henke’s contemporary sculptures solicit masculine compositions from Brutalism to Surrealism to Freudian theory. Yet Henke floods, drowns and ignites a fierce femininity in these movements, hacking into the historical and radicalizing once patriarchal modes of expression. Recurring motifs of doll houses cluttering alcoves and milk bottle mansions scraping the skylines of her installed worlds appear next to her portfolio of bronze breasts and sand asses resting immobile but poised. She is the ultimate neoteric renaissance producer.

Fantasy is not exactly the first word that comes to mind when looking at Henke’s works, but on further examination you start to see fantastical motifs: surrealism, anarchy, hyper-sexuality, destiny. Henke’s work beckons the viewer to come closer: she opens up her own intimate biography and, in doing so, invites hundreds of other protagonists to drop into the story, creating a large municipal, heart-pounding sprawl. 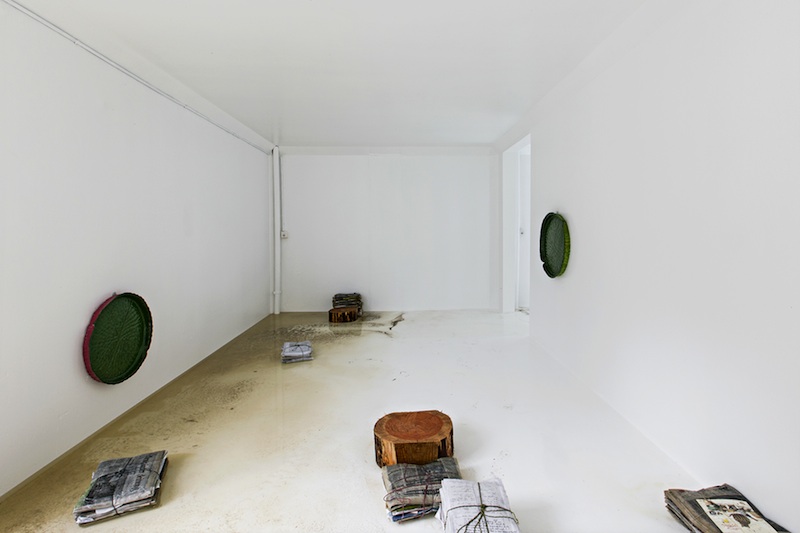 Penny Rafferty: Have you always been confronting the “real” with the fantastical?

Lena Henke: I have always been interested in multiple cross-components of identified systems such as gender, architecture, urban domestication and politics. I actively blend them through my work and fantasy elements erupt.

I also use motifs that are commonly found in fantasy. The doll’s house is something I am constantly referencing but not in a literal way. At times, my doll houses become explicitly sexual, more like a vagina or penis rather than a building. This mirrors Henrik Ibsen’s ‘A Doll’s House’, a play on the sexual trapping of the domestic. The shape often emulates a horse’s hoof: I grew up next to a horse farm and dedicated a lot of my earlier life to horses. But the house’s infrastructures—the bricks and mortar, so to speak—are milk bottles. They are readymades, basically, this plastic kind you find only in the U.S. They stand erect but soothing, a symbolic reference to mother’s milk. 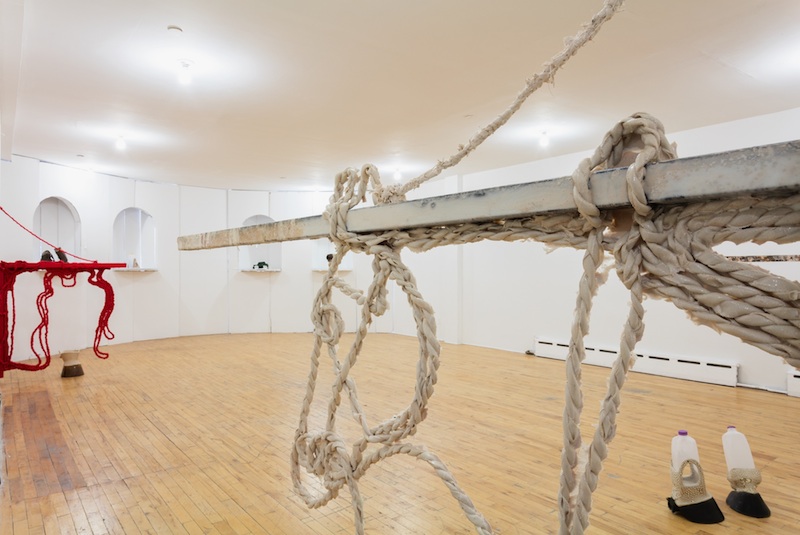 LH: That’s the way it should be, right? [laughs] I absolutely want to have this strong female sculptural voice. I’m a huge fan of architecture and as you know most architects were male. Hence the need for me to interject a female sovereignty into these landscapes.

LH: Yes, Moses was a brutal man in some ways. He took a butcher’s axe to the city of New York. He is the man responsible for the highways that run through the city but he had to make room for them first, so he evicted poor families from ghetto housing units promising them a new infrastructure and better accommodation. Of course, they were never given the latter.

When I first moved to New York from Frankfurt, Moses became very present in my work. I had a studio next to the BQE [Brooklyn Queens Express] that was one of Moses’ super-structures, a huge sweeping highway; it’s insanely noisy but also magnificently robust. I have become really fond of public space and urban planning. It was also the starting point for my and Marie Karlberg’s very first M/L Artspace show. Under the BQE, paying homage to Kasper König’s ‘Skulptur Projekte Münster’, in a way, but way more hardcore. We used parking spots to situate sculptures until the police found us. The de-installs were actually the best part for me: after a few hours of presentation the works started to move. I have always been interested in the way we map or see movement of form. 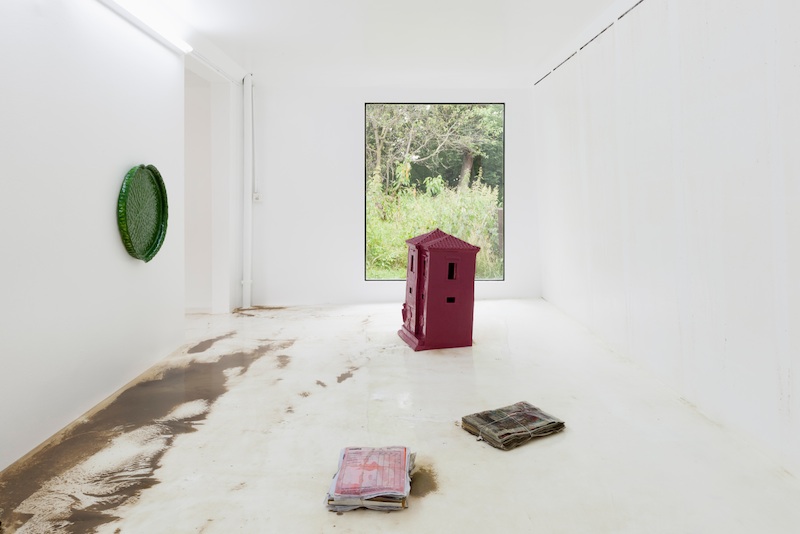 PR: Your recent show ‘Available Light’ at the Kunstverein Braunschweig also works with form and movement.

LH: This was the first time I started to sculpt with light. I remember when I was offered this show; I was flooded with memories of being younger at the art academy and visiting this lustrous building: gilded and aristocratic. I decided at some point to almost bar the visitor from being able to traditionally view the works, shifting the physical momentum of the eyes. I built around the house, closing off the front door; you could peer into the windows from an elevated deep purple ramp on stilts, that led you to the backdoor. Additionally, I blocked all the windows of their most beautiful mirrored ballroom with large circular disks, blocking and sculpting the light that came through.

PR: Why did the light or absence of it become so important to you in this particular building?

LH: First of all, I wanted to give visitors, residents and strangers concrete reasons for using my elevated “sidewalk” around the building. I also used soothing red bulbs as a starting point, upon entering in an otherwise empty first room, because the show happened during the cold winter months. You could see the warm light from far away, even from the streets and sidewalks surrounding the institution. I wanted to activate the visitors, really, like pulling a sock inside out and showing nothing but the empty side of it. I also wanted to tap into users, watchers and voyeurs. ‘Available Light’, is a show title that referred to Lucinda Childs‘ first successful play in 1983, including work by Frank O. Gehry and Sol Lewitt. Childs used only natural light pouring in through the skylights.

In my version the “light art” was looking back at the visitor, while they tried to peek in from the cold outside. 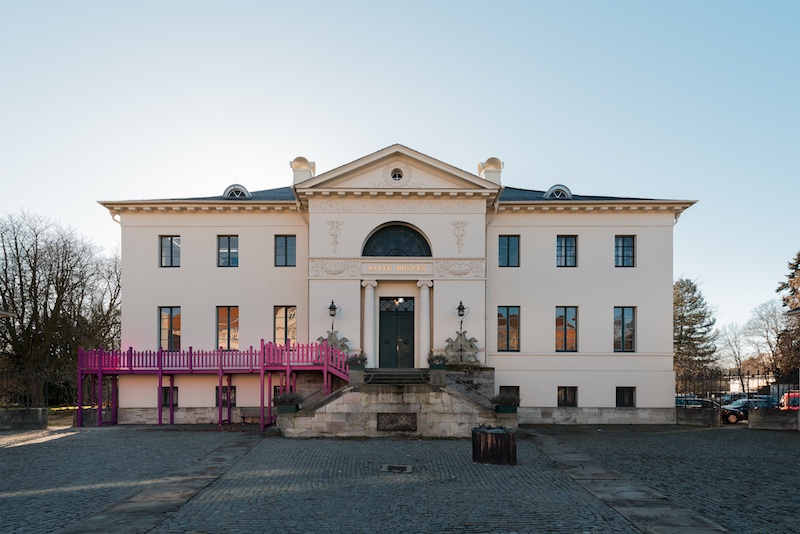 PR: This show also housed your first ever self-portrait.

LH: Yes, it’s a bronze sculpture in the shape of a horse’s head, sat on top of a wooden plinth placed outside the Kunstverein. My first self portrait was made up from a relief of the Manhattan skyline, filled with all the things that have become iconic to me throughout the five years I have lived in New York. It’s like a blueprint or map of me, in a way.

In the last few years, I have visited many parks and gardens, researching the genre of public spaces that have been designed purely by one individual. Some of my favorites were built by Sir Edward James, like his gardens in Xilitla in Mexico; Roberto Burle Marx, who built dry gardens on top of skyscrapers; and Luis Barragán, who built everything from the scale of a horse. They are fascinating, you step into someone’s world view, their pyschosphere. I think that’s what I was trying to accomplish with my self-portrait. 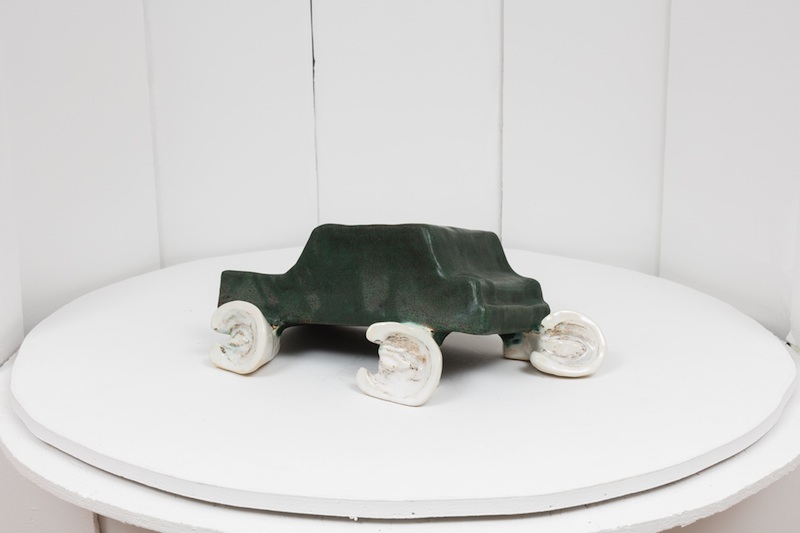 PR: Your works seems deeply affected by pyscho-imagery and surrealism.

LH: I don’t see myself using the same toolsets as the architects and creators I’ve investigated. I am organizing and then feminizing, to make a home for myself in my own work, carving out space for the psycho and the surreal in the mundane.