Egill Sæbjörnsson is a Berlin-based, Icelandic visual and performance artist. He graduated from the Icelandic College of Arts and Crafts (now the Icelandic Academy of the Arts) in 1997 and studied at the University of Paris St. Denis from 1995 to 1996. He is interested in the interplay between physical materials and the mental projections they coexist with. The line between real and illusory is often blurred in his work, highlighting how subjective preconceptions and responses mould the material world. He views art as a core, quasi-autonomous force that shapes humans just as it is shaped by them. Since 2008, he has collaborated with two Icelandic trolls. So, when Sæbjörnsson was asked to represent Iceland for the Venice Biennale 2017, it seemed only fair that the trolls should also be involved. The result is ‘OUT OF CONTROLL IN VENICE’. Berlin Art Link interviewed him about the mysterious upcoming piece. 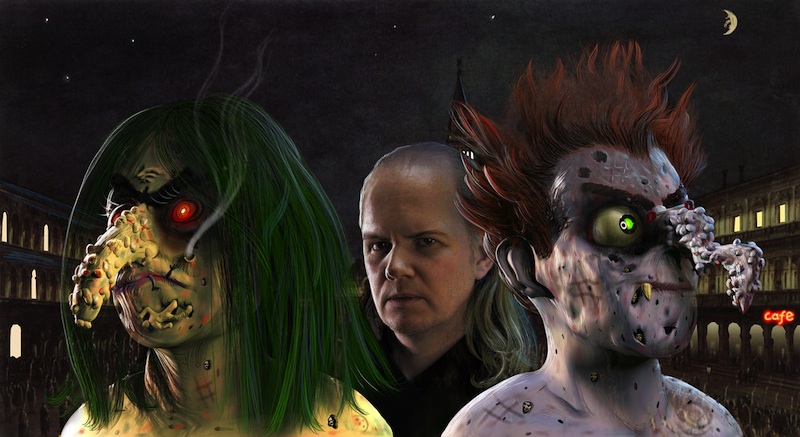 Egill Saebjörnsson: ‘Egill, Ügh and Boogar’, 2017 // Courtesy and copyright the artist and i8 Gallery

Berlin Art Link: How did you come up with the concept for the Biennale?

Egill Sæbjörnsson: Well, I got a blitz image – it just popped into my mind like dunk. I just saw a picture in my mind. The trolls stepped into it a little after. I met the trolls [Ūgh and Bõögâr] in 2008 and I was just living with them in an imaginary world: just bullshitting, playing with two trolls. It was not art. I never expected to show it to anyone. It was just for fun.

BAL: So are the trolls in the position of curators or of collaborators?

ES: They are the artists.

BAL: So you’re the curator.

ES: No, Stefanie Böttcher [Director of Kunsthalle Mainz] is the curator.

BAL: So how do you conceive of the different roles? How do artists and curators overlap in this project?

ES: The trolls began as a fiction in my mind, now that is mixed with the minds of others. So, everything they say and do is kind of created by us: by Stefanie, or the people at the Pavilion, or me. But because they exist as an idea between all of us, it’s like they almost have a life of their own. They are entities. You, too, now have some image of them, which is different from mine. And through all of the projected images they get rendered into a real thing.

BAL: Will they have a physical presence at the Icelandic Pavilion?

ES: There will be something physical of them, for people to experience. Yes. They are doing a social interactive artwork.

BAL: What can you tell us about that?

ES: Well, I’m just afraid that they will eat everybody. Because that’s what trolls do, you know. They are super fierce beings. Maybe they’re pretending that they will do art, but they are just going to eat everyone.

BAL: Aren’t there nice trolls, too?

ES: One of the trolls, Ūgh, is more like that. He is always asking Bõögâr if it’s okay to be sensitive. 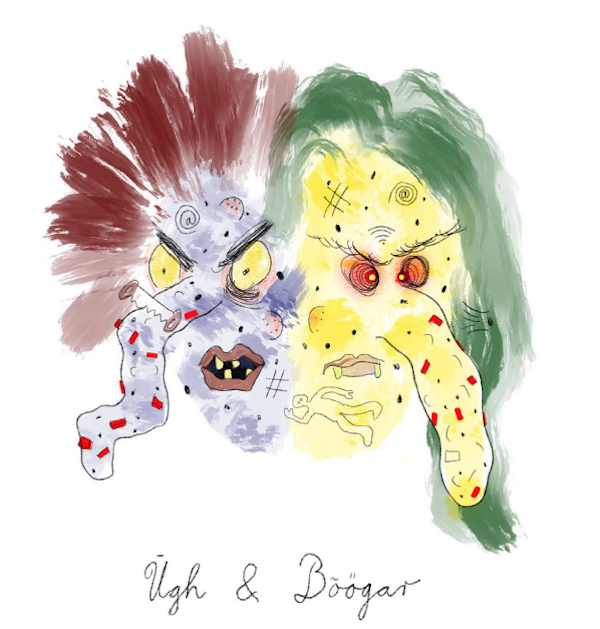 Egill Saebjörnsson: ‘Trollbook’, 2017 // Courtesy and copyright the artist and i8 Gallery

BAL: Some of your larger-scale projects have been site-specific. Will you be relating this work to the physical context of Venice, or to the Biennale?

ES: No, it will be purely the trolls. It won’t be about the Biennale or the political situation. It’s about being, more than about answering philosophical questions. It is just following the trolls, who are entities, as they do stuff.

My goal is that viewers get engulfed into the world of the trolls. That they become part of it, somehow. When you get into the exhibition you will get a coffee. And some bubbly water. And you can sit down. And you can listen to the trolls talking to each other. It won’t be like a typical gallery space: more like looking at art in a café or in someone’s living room. But I do hope that people get blown away.

BAL: Can you tell me about your interest in architecture?

ES: I find that 20th century architecture has a sickness. Too many flat shapes, too many big shapes. They are inhuman, they make you feel small, and you can’t interact with the face of the building. It’s not that the building doesn’t have a face; we humans project faces onto everything because we want to interact with our environment. But it’s like talking to a person who never moves her face and always answers in the same blunt, blank way. Blank buildings render you blank.

Decoration is a taboo in the minds of most architects; it has been erased from the discipline. So, instead of talking about decoration, I talk about ‘complicated surfaces’ because our nervous system needs large and small shapes and forms, and curves as well as straight lines. That would be a much more human-friendly environment. My show in Iceland, ‘The Building as a Being,’ refers to this. Of course, buildings are not beings but we humans have a little monkey inside us that sees them as beings. If they are nice beings, we feel good. If they are not nice beings, we don’t feel good.

The Biennale piece will have some architectural elements in it. I think architecture should be adventurous. Of course, we can’t afford to do that all the time. But I think if we have nine simple houses in a row and the tenth is very adventurous, then that is very good for the other nine houses. A mixture is good.

BAL: And how do you want to present these ideas?

ES: I do it through play. During play, the ideas find their way through somehow. This piece is a playful piece. It’s almost too simple. I thought I couldn’t make art out of it because it was something that children do. I’m playing and all of the other stuff I’ve been thinking about—all the philosophy—finds its way through somehow. But I’m not controlling it.

BAL: Where does your interest in trolls come from?

ES: I thought trolls were the most hideous and stupid phenomena in existence, and I was ashamed of them, with their silly long noses and hair. The ultimate cliché of something Nordic: really bad. I’m not interested in Nordic identity. I’m a guy who says: “yeah, I’m Icelandic, but actually I’m Celtic, and actually the Celts come from Phoenicia, which is more-or-less where Syria is today, so I might as well be in Syria.” It’s not so many generations since then. I think more globally, seeing humanity as one. But I picked up the trolls out of curiosity because I thought they were the worst things you could make art with. And then I thought: “okay, then they must also be the most interesting”. I sometimes make these strange decisions.

Getting immersed in the trolls’ world and seeing what they do and what they come up with is so liberating for me. There’s no ideology behind it. I’m not preaching. Do answers to philosophical questions make you happy? Or is it perhaps better to play Nintendo with trolls? To sit with friends and just enjoying being? 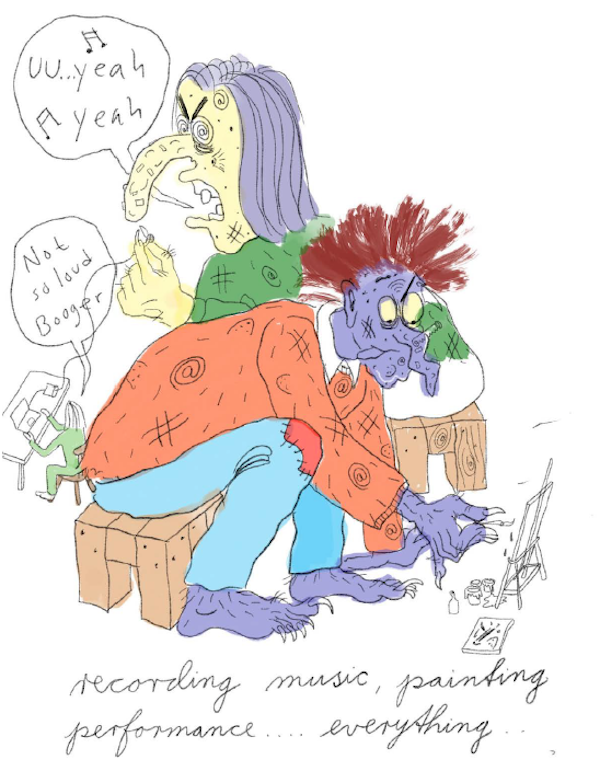 Egill Saebjörnsson: ‘Trollbook’, 2017 // Courtesy and copyright the artist and i8 Gallery

BAL: You didn’t approach this piece politically but you have put a lot of emphasis on the role of ‘play’. Do you think ‘play’ is an ideological practice? Does it encourage a particular, even utopian, way of being?

ES: Peter Gray says in his text ‘Play as a Foundation for Hunter Gatherer Social Existence’, that play plays too little part in our society, and too much emphasis is on theory and being adult too early. He points out that the way hunter-gatherers approached what we call work today was with humour and a different kind of social hierarchy than today. I find this interesting because my History of Art teacher once said, “If you want to define what comes next, you have to forego the current way of thinking.”

Animals with big brains need to play more because through play you learn, by making mistakes, to react to situations that face us when we enter adult life. So, the more play you have as child, the better you are prepared for adult life. Children today are way too restricted and controlled. BY ADULTS. Art today is also more and more a discipline of specialists, and that is killing it. Art is a deeper force that will eventually explode these chains. Art is the force of play and experimentation, and is strongly related to being human. Art is a giant that carries mankind through its current crisis into sanity. So, my work, with the two giants, Ugh & Boogar, might be about anti-professionalism. About entering the zone of play and finding the answers there, instead of searching for them in the university. Back to play, back to the hunter-gatherer lifestyle.