Hans Op de Beeck‘s expansive practice has been likened to interior or set design, as it draws from typologies of architectural modelling and scenography. Often, the Belgian artist creates spatial mock-ups in a 1:1 scale, not as reconstructions but as fresh inventions of spaces with only a tenuous link to reality. His current retrospective at Kunstmuseum Wolfsburg is a darkened cityscape, beginning in the nouveau riche ‘Collector’s House’ and spilling onto the terrace and into the dimly-lit street below. Each small entrance off the street reveals a different perspective on Op de Beeck’s oeuvre, from video to watercolour animation to musical composition. He creates fantastical environments with a kitsch aesthetic, harkening to moments of his own childhood that rest uneasily in content between consciousness and dream. 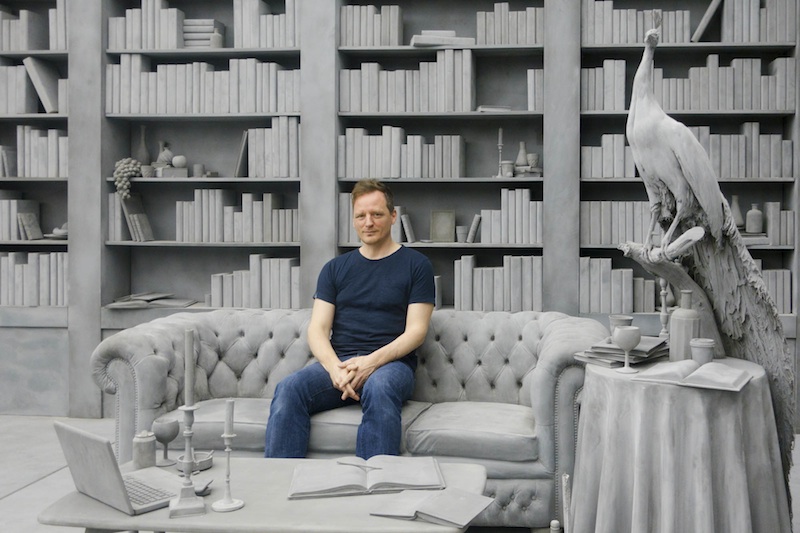 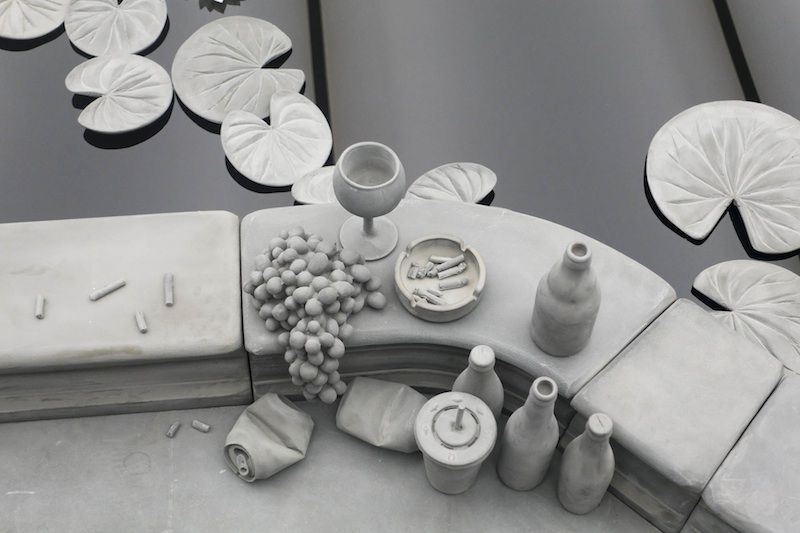 The word außergewöhnlich in German has multiple translations (including the exhibition’s title), and while it is not quite the same as unheimlich (uncanny), both contain references to a sense of displacement from the domestic sphere. In Op de Beeck’s exhibition, we feel at home in shared memories—such as the absurd experience of waiting at a deserted stop light, late at night—but with an eerie sense of danger lurking in the shadows. The alleyways of his mock neighbourhood have the familiar glow of small town street lamps, a fountain in the square signals the would-be heart of the town, now shrouded in darkness and potential criminality.

The title of an exhibited video series—’Staging Silence’—gives us a hint of the artist’s approach to his practice as a whole. His opening work in the exhibition, the ‘Collector’s House’, takes the form of an art collector’s living room—with bookshelves, sculptures, paintings, ashtrays and party detritus dotting the neo-classical interior. Each of the items is handcrafted in unassuming materials (the “pillows” are as heavy as bricks) and the whole scene is painted in a matte grey colour, weighing it down with forced neutrality. As such, the visitors to the space take on a certain comparative vibrancy that renders us the real animators of the work. We are like scale people in an architectural model, giving life to the frozen set. 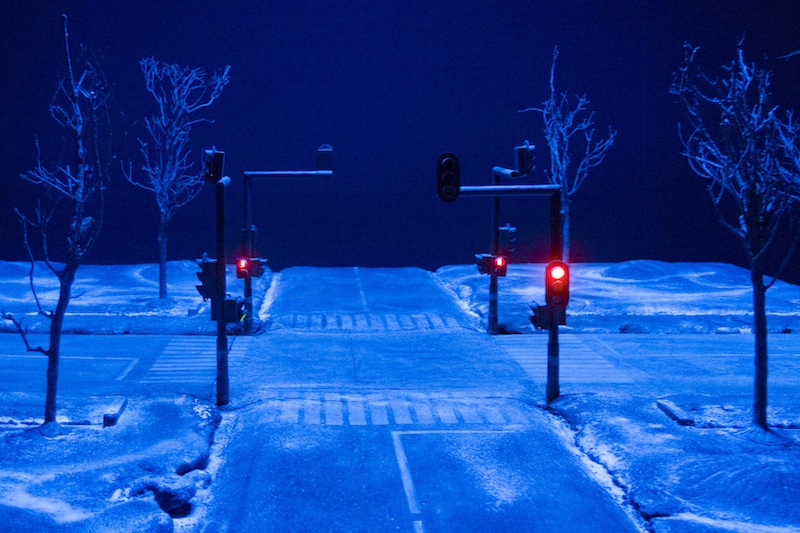 Op de Beeck is fascinated by our tendencies to clumsily yet purposefully stage our homes, cities and work environments. His pieces seek to evoke this deliberateness, revealing the self-conscious elements of design. In his films, he does so by showing the process and materials of his scenography. At times overly didactic, the black-and-white films, with their emotive musical scores, are reminiscent of deliberately playful, corporate how-to videos popping up on your Facebook feed. They are less edgy than the built elements of the exhibition, the cutesiness of which are always undercut by a descending darkness. The films and animated watercolours are more like storybook illustrations that resist the somber pull of his double-sided narratives. 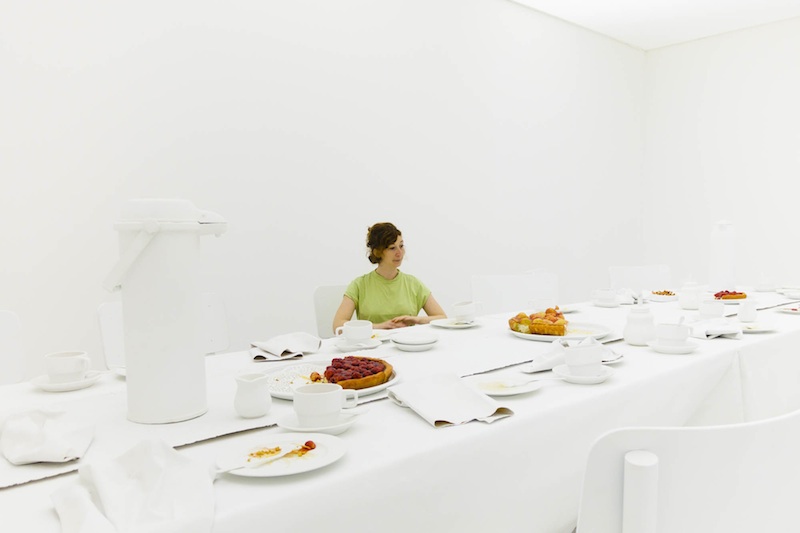 In his large installation ‘Sea of Tranquility,’ Op de Beeck has created a museum within the museum. Based around a fictional cruise-liner, the exhibition functions as a dedication to this mighty vessel. A model of the boat in the opening room takes inspiration from the Queen Mary 2, a massive ocean liner with unprecedented on-board facilities, which was billed at its inception as the “birth of a legend.” Op de Beeck points out the absurdity of a legendary birth, and allows this elitist corporatism to permeate his own re-creation.

Race and gender dynamics play interestingly into this section of the exhibition, where the only people of colour are the service and entertainment class, while the cruise guests are all white aristocrats. Op de Beeck notes that the only people who smile are the dancers and jazz singer, yet it seems that their smiles are part of their job description, rather than genuine happiness. The guests are all straight-faced, stiff-upper-lip types with severe plastic surgery and expensive clothing. Despite the terrifying reality of some of these class distinctions, we are never far from remembering the artistic nature of the ship: the crew uniforms are oddly stitched, geometric constructions and the engineering of the ship itself seems a piece of visionary architecture, structurally impossible. The installation is meant to reveal the poetics of melancholy, where the malaise of the subjects can also appear as deceptively zen states, as well.

Op de Beeck takes the signifiers of class in contemporary society—from the collector’s overblown home decor to the cruise ship’s excessive lifestyle amenities—and deliberately reveals their insidious underbelly. Sometimes this is achieved through a simple playfulness, and other times by adjustments of light and scale, slight shifts that tip the balance from banal to unnerving. Op de Beeck stresses that his works are not reconstructions of existing rooms or cities, but fantasized evocations of their atmosphere and affect. The retrospective exhibition is a view into the disparate corners of the artist’s own psychologically-informed constructions, which range from interactive and didactic to aesthetically chilling.