It’s almost the end of April, which means Gallery Weekend 2017 is fast approaching. Celebrating its 13th edition, 47 galleries across Berlin will host work by both new and well-established artists from April 29th until May 1st. The choice can be overwhelming so Berlin Art Link has compiled its own list of must-sees.

Over Gallery Weekend, Esther Schipper is holding the inaugural exhibition at its new location, Potsdamer Strasse 81E. The space will be shared by Albanian video-artist Anri Sala and Canadian interdisciplinary artist Angela Bulloch. Both artists have a primary interest in sound. For Turner Prize nominee Bulloch this is part of a fascination with systems, codes and patterns. Her installation and sculpture pieces seek to program a particular experience for the viewer, playing with notions of control in art reception. Sala, whose early video works explore life after communism in Albania, is interested in the psychological effects of sound, particularly as a conduit for memory. These two artists, who take similar fixations in different directions, will provide an expansive and thought-provoking opening for the new gallery space. 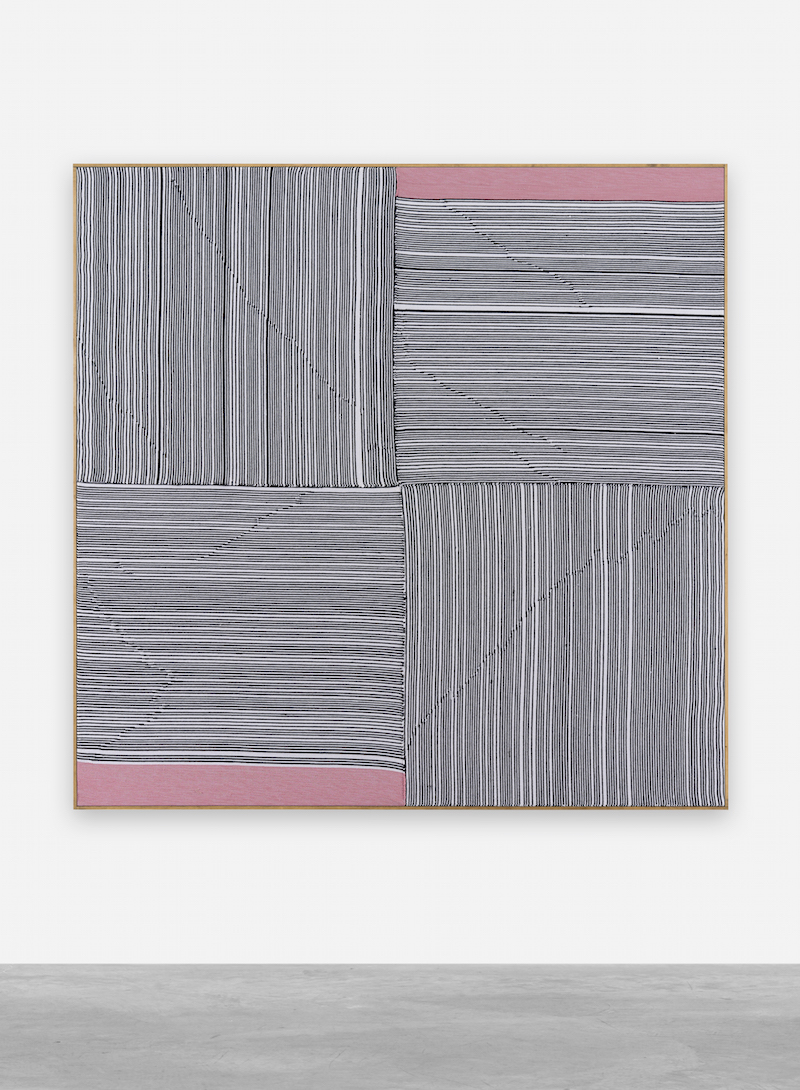 Brent Wadden‘s large, hand-woven patterns of wool and yarn gently undo the assumptions of austerity that accompany repetitive, geometric art. Though the contrasts in colour and shape are boldly beautiful, gradients are muffled and sharp lines softened by the material. Wool is an unpredictable medium, and inconsistencies give humanity and character to the otherwise mathematical arrangements. Wadden’s cavalier approach to a traditionally painstaking form of art extends to working only with second-hand or pre-used yarn and wool, using a matching ‘filler’ when it runs out. Ultimately, the extreme beauty of Wadden’s pieces lies in the unexpected visibility of the materiality and process behind the geometric shapes. 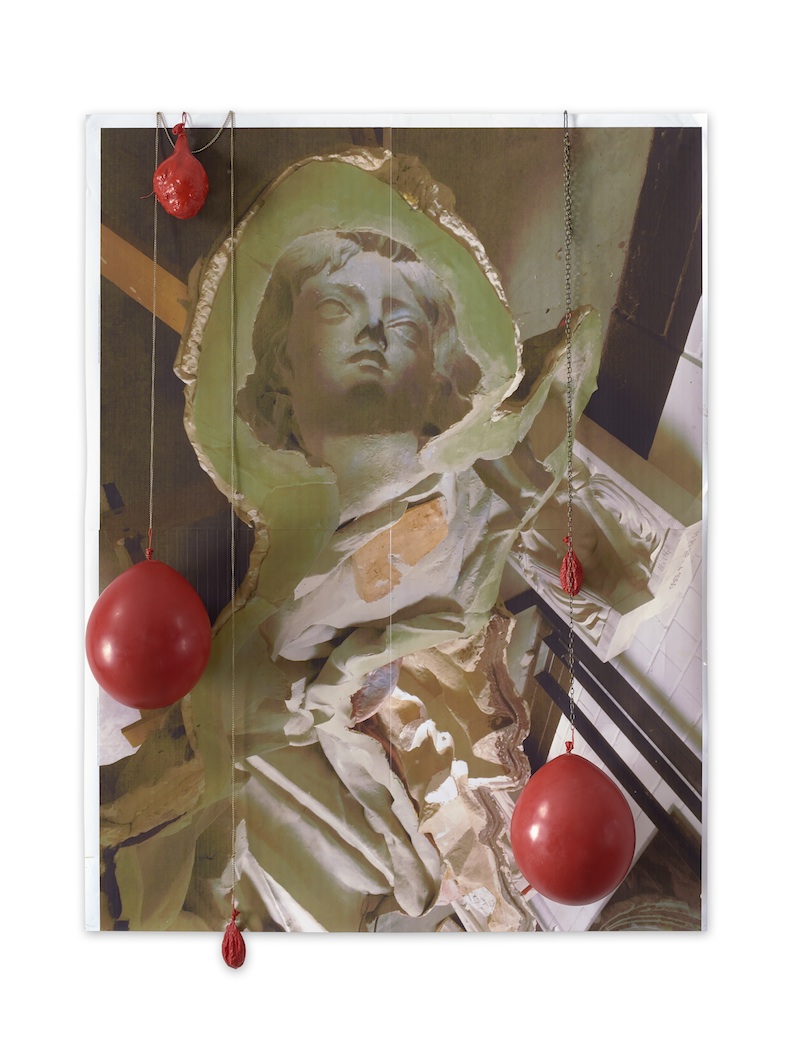 ‘Much Time, Little Space’ was the epithet of a past Katja Strunz exhibition, inspired, she explained, by a Heinrich Heine quotation: “The railway kills space, so we are only left with time.” Strunz doesn’t kill space, she folds it. Many of her sculptures, often in paper and metals, fold in on themselves in geometric compositions or mimic a carelessly scrunched plastic bag or sheet, but are actually the products of long, laborious processes: keepers of time. It might be for this reason that Strunz is fascinated by books: the temporal confusion wrought by an object that takes up little space, but is the product of weeks and months. The Constructivist influence on her dynamic work is offset by a frequent emphasis on handmade materials. These come together to produce fascinating sculptural compositions. 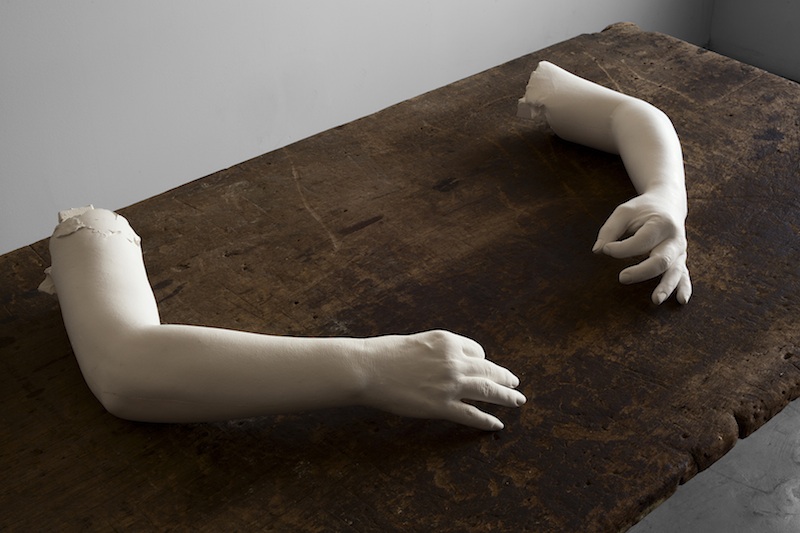 The multi-disciplinary conceptual artist from South Korea expands on her existing work on breath and breathing in this exhibition, which runs from Gallery Weekend until June 24th. Fresh from winning the 2017 Asia Arts Hong Kong Award, Kimsooja reprises an exploration of the space created by stillness and inactivity as a practice. Her work is often embedded in South Korean culture, materials and practices, but—as with her multi-channel video installation ‘Thread Routes’—she is fascinated by global connectedness and traces chains of production for both material and intangible entities.

Following last year’s group show, PAPER POSITIONS in May 2016 at Bikini Berlin, the event has been expanded into an new independent art fair celebrating paper-based works. Thirty galleries from Germany, USA, Austria, Romania and the Netherlands present their most significant artistic positions of contemporary and modern art with focus on paper works: drawings, collages, paper cuttings, photography, art books and objects. PAPER POSITIONS will be held on the first floor of Bikini Berlin for the whole of Gallery Weekend. 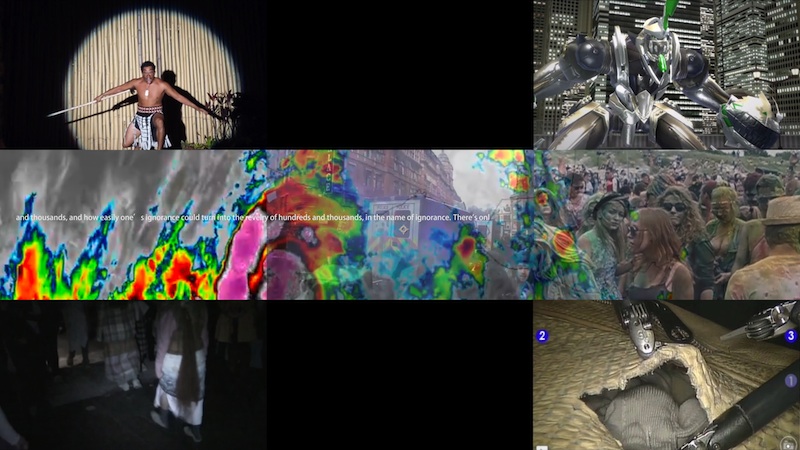 Guan Xiao is a multidisciplinary artist from Beijing, mostly working with sculpture, installation and video. Her work often explores the processes behind ‘cognition’: how impressions, judgements and imagination combine when we acquire knowledge. The works exhibited at Kraupa-Tuskany Zeidler situate the artist’s curiosity about cognition in rapidly changing urban environments. Her ultramodern magpie approach of appropriating and juxtaposing forms, slogans and warped clichés will both mimic and expand upon the world we know. A new video piece, ‘Dengue Dengue Dengue’, will look specifically at the cultural epidemic of ‘habits’ in a globalised world. It promises to be a feast for the eyes and mind.

Following an open call for artists working in painting, sculpture, photography, video, performance, virtual art, and music, the eclectic Tuscan tannery and hand-crafted shoe manufacturer, Guidi, presents the exhibition, ‘Art for Art’s Sake’. From 7pm until midnight on April 28th there will be a pizza and wine reception at Kühlhaus to celebrate the opening of the exhibition. A secret electronic set by a renowned DJ will bring the concrete-walled warehouse to life. Artworks by 5 jury-selected artists will be projected in the former industrial space, with sculptures and sound installations throughout the venue. RSVP to artforartssake@guidi.it to attend the opening party. 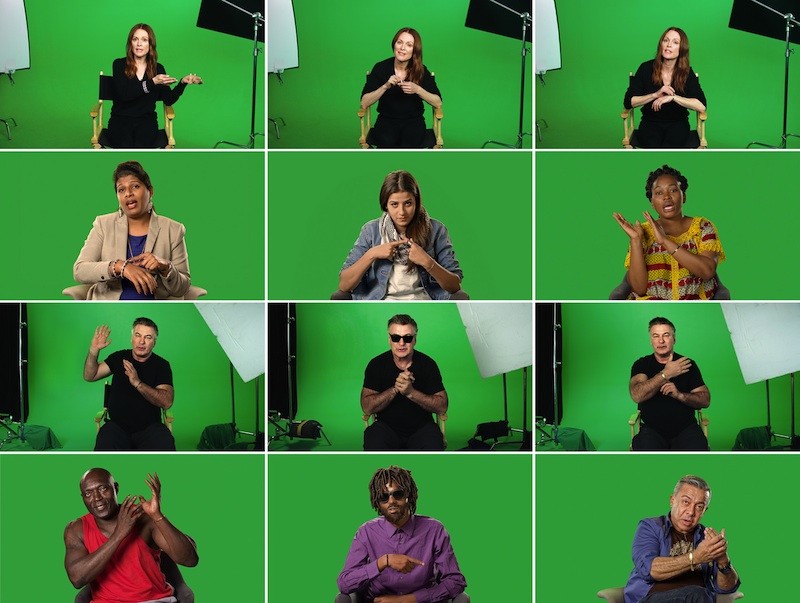 Candice Breitz‘s seven-channel video installation, ‘Love Story’, is a fascinating exploration of empathy. The South African artist’s piece is based on interviews with six individuals who fled oppression in their homeland, including José Maria João, a former child soldier from Angola, and Shabeena Francis Saveri, a transgender activist from India. Breitz gave their testimonies to two A-list actors, Alec Baldwin and Julianne Moore. We thus encounter the real narratives of extreme suffering stripped of their context via the performances of two celebrities who are extremely adept at inciting feeling in an audience. Breitz’s challenging piece promises to make us question what we give our attention to.

The theme of this year’s exhibition at Kunst am Spreeknie, housed in a renovated transformer plant in Schöneweide, is an extension of “Social Geometry”, a term introduced by the American sociologist Donald Black in an effort to measure social morphology, as it had been developed within postmodern society. Black’s model was a cluster, composed by geometrical lines and shapes, designed to convey the real space where people live, while also standing as a new type of geography. The group show of international, Berlin-based artists ‘Social Geometrism’ aims to explore and highlight new spatiotemporal formations. This exhibition brings together lines, solids, surfaces and more complex polyhedral figures that present themselves as sociological models.

On April 27th, the ZKR opens their group exhibition, ‘Between Spaces’. Viewers will be offered diverse artistic perspectives on urbanism, architecture and public space. The exhibition traces its origins in the pioneering work of New York artist Gordon Matta-Clark (1943-1978), who revolutionised the practice of art in the public realm in the 1960s and 1970s. The first part of the exhibition sets Matta-Clark’s work against that of contemporary artists. The second part focuses upon the urban landscape of Berlin. Works by artists from the former GDR enter into a dialogue with standpoints of young Berlin-based artists. The exhibition is an unmissable experience for those interested in the relationship between art and urban architecture, or in the distinct attitudes toward urban space at different historical moments.