‘Theatrum Orbis’ is the title of the new exhibition commissioned and curated by Semyon Mikhailovsky the for the Russian Pavilion at the 57th Venice Biennale. The exhibition translates to ‘Theatre of the World’ and the name takes its origins from the first modern atlas, created by Abraham Ortelius during the age of discovery. The name is fitting for the exhibition which is theatrical in both its concept and form, bringing together sculpture, installation, video and sound. The Pavilion will present the talents of Grisha Bruskin, Recycle Group and Sasha Pirogova alongside contemporary Russian composers, providing visitors with a culturally relevant narrative of contemporary issues.

Bruskin’s figurative white sculptures offer a clash of antiquity and modernity. His figures—which express the contradictory nature of power—take shape as mechanized hybrids: two-headed birds. Dolls, dummies and androids explore ideas of international terrorism and his soldier sculptures, combined with binoculars and drones, translate the idea of transparency; authority figures are so easily able to monitor and spy on the public. After descending the stairs, visitors will pass through a labyrinth of further rooms. ‘Blocked Content’, Recycle Group’s installation piece, shows frozen profiles in a vacuum, which are only fully visible through a virtual reality app that visitors can download onto their phones. The work aims to explore the immorality of contemporary society. Video artist Pirogova will present a performative video titled ‘Garden’, which tells the story of eternal life, death and morality expressed through darkness and light. Her work focuses on motion and its capacity for exploring the links between ritual, theatre, performance and dance.

Berlin Art Link managed to catch up with the artists and get some further insight into their artistic practices. 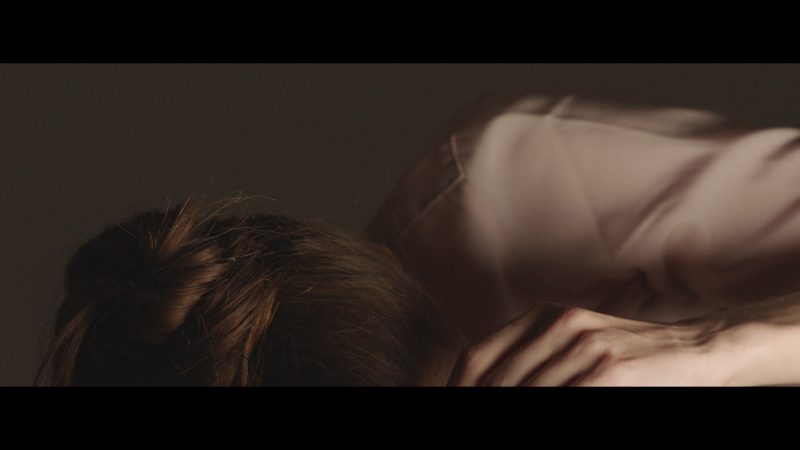 Lisa Birch: The title of the exhibition translates to ‘Theatre of the World’. Why have you chosen this title for your exhibition and how has the title influenced the work?

Semyon Mikhailovsky: The name of the project — ‘Theatrum Orbis’ — was borrowed from the Flemish cartographer Abraham Ortelius, who created a world atlas that is to all intents and purposes furnished with the comments of travellers and missionaries (incidentally, with miraculous maps of Russia, Muscovy and Tartary) and complies fully with the nature of the pavilion. The theatre—scaffolds on which the spectacle is played, the lower stage or under stage, from where they would emerge and where they would descend, the nature of the developments here and there, in the limelight or in the dark of the night where history and modernity are combined—is capable of uniting artists and composers who appear at first glance to be incompatible.

LB: How do you feel that the three separate projects are interrelated. What are the common themes that run through them all?

SM: In the top suite of rooms we decided to establish podiums and pedestals for Grisha Bruskin’s sculptures and to project a black and white video with capricious phantom shadows onto the walls. At the bottom, in the crypt, I proposed presenting the sculptures of the Recycle Group: the young and successful artists Egor Kuznetsov and Andrey Blokhin, who I knew from the time when they lived in Krasnodar, and who stood out due to their healthy ambitions and sophisticated irony. They came up with the idea of taking as the basis Dante’s ‘Divine Comedy’, a journey around the ninth circle of hell, where the most awful criminals suffer, frozen in ice: traitors to the homeland and their compatriots, to their nearest and dearest, doomed to spend eternal damnation in the cold. Dante placed there not only the mythical Antonor, but also historical Brutus and Cassius, the murderers of Julius Caesar, and of course, Judas Iscariot, who had betrayed Christ.

The third participant of the exhibition is Sasha Pirogova, who has two educations; the first in physics and mathematics at Moscow State University, and the second in art at the Rodchenko School. A screen was placed behind partially open theatrical blinds to show a video, starting in complete darkness, with different, barely perceptible figures crouching, and ending with a magical dance of people or elves, full of light. The wonderful girl leads us to a garden, to the plane-tree avenue of Giardini.

For the pavilion—reminiscent of a music box, with toy figures, enthusiastic about adult pastimes, and traitors blockaded in icy rubble—there should be a dramatic prologue and lyrical finale. 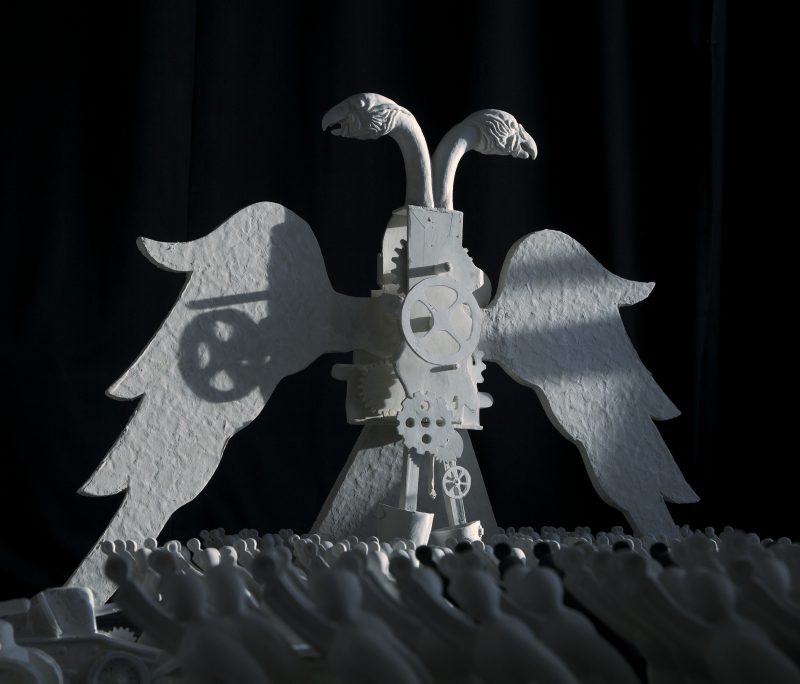 Grisha Bruskin: Scene from 2016-2017 // courtesy of the artist and the Russian Pavilion

LB: As part of the exhibition there will also be an audio installation composed by Dmitri Kourliandski. Was this piece of music created especially for the art work and, if so, why?

SM: We came to Venice with Grisha Bruskin in the first days of December. The city was cloaked in mist. We wandered like sleepwalkers through winding, resonant side streets, leading us to the cloudy water. After walking by the embankment, we reached Venice Gardens. The Biennale had just finished. The pavilions were empty. When we approached our pavilion, we heard a strange sound coming from within. In actual fact, the explanation was more than prosaic: the workers were dismantling a metal structure. However, in the deserted garden the rumble of metal had a special sound. And this is when we came up with the idea of creating a sonorous pavilion, so that you would not only hear the sounds of a rampant crowd or melting ice inside, but also outside.

Dmitri Kourliandski has written a new work, ‘Commedia delle arti’, consisting of an interactive and performative sound installation. From the façade of the building ‘Commedia dell’ascolto’ plays, recorded by leading Russian musicians. At the entrance to the Pavilion, visitors can pick-up ‘score-instructions’ that can be followed to create a dialogue between the artist, visitor and outside world.

Inside the pavilion Dmitri Kourliandski has composed a special score for the Recycle Group’s ‘Blocked Content’. While two other talented composers Peter Aidu and Konstantin Dudakov-Kashuro have created a special piece entitled ‘Theatrum Sonus’ for Grisha Bruskin’s magnum opus.

LB: Grish Bruskin – in what way does your work explore your Russian heritage combined with your Jewish faith?

Grisha Bruskin: The world of ‘Scene Change’ is a landscape where new shelters (locis) can be found for new memory figures. In ‘Scene Change’, there is no movement whatsoever, be it from old to new, from primitive to complex, or from worse to better. There is no “yesterday”, no “today”, and no “tomorrow”. Time has been compressed. The crowd of ‘Scene Change’ is a mass, a multitude. From the insect crowd of past centuries to Baudrillard’s silent majority, intimidated by power and terrorists. The terrorists of ‘Scene Change’ are dolls, dummies, hybrids and automatons. What terrorists and crowds have in common is anonymity, indistinguishability. The power of ‘Scene Change’ is a mechanical hybrid, a two-headed eagle, the imperial symbol. Power needs a unified and transparent humankind to eavesdrop and spy on. The archaic glimmers through the contemporary. Throughout history, the “new” has always preserved the memory of “the old”. The magnum opus of ‘Scene Change’ is carried out in alchemical retorts. ‘Scene Change’ serves as a space-stage for a Glass Bead Game, toy soldiers, the theatre, puppets, and magic lanterns. 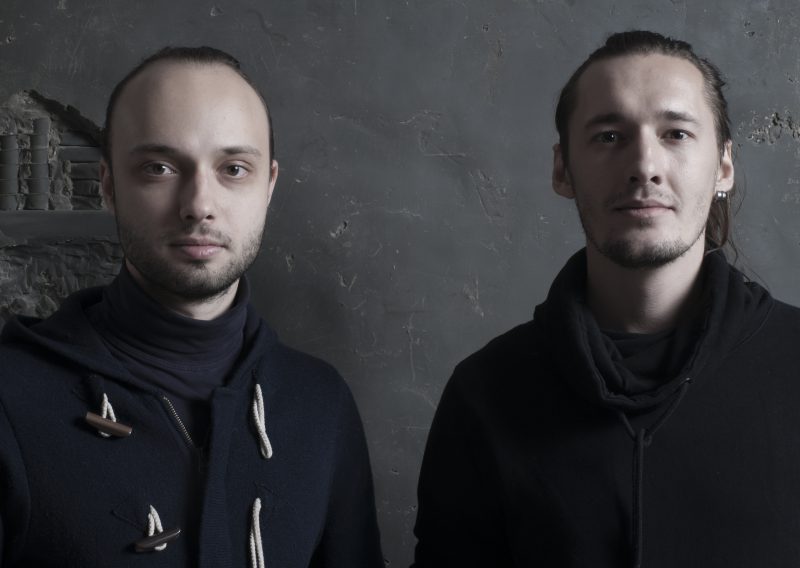 LB: Recycle Group’s collective work explores the present via visions of what future societies might look like littered with today’s waste. Can you explain how your installation ‘Blocked Content’ explores these themes?

Recycle Group: Recycle Group has been delving into the phenomenon of the virtual world. We reflect on the possibility of the Net to offer immortality to its users. Being embedded in the Internet, the online portraits exist, whether or not a person uses their account. Yet an eternal virtual life is only promised to the righteous users of the Net, while the disobedient are blocked by the machine. In store for spammers, impostors, pretenders, the foul-mouthed, and aggressive hawkers of goods and services, there is an eternal existence in a virtual hell, an information void, white noise with no likes or reposts. They are not eligible for any indulgence – an algorithm perceives the violation and blocks the profile forever. 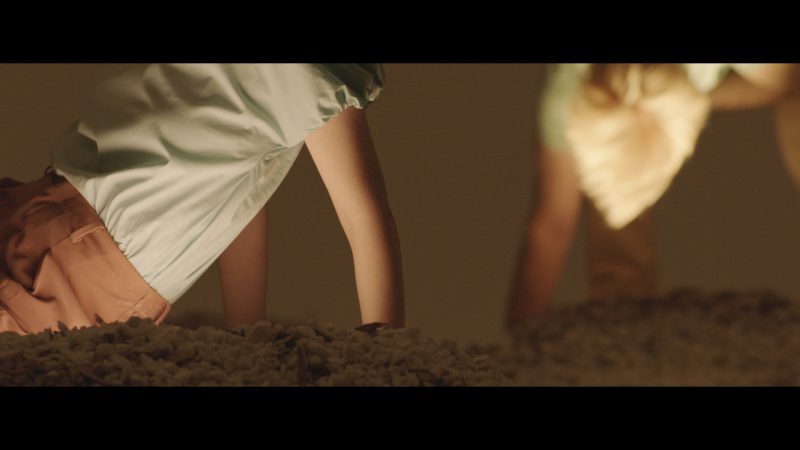 LB: Sasha Pirogova – You have commented that your video ‘Garden’ allows for the “possibility to overcome death”. How does this theme of death link to overcoming cultural boundaries as a result of mass migration, which was the original exhibition theme?

Sasha Pirogova: In the video ‘Garden’, the story of life and death transforms into the notion of light and darkness where there is no opposition: darkness represents the lack of light and has potential to be enlightened. And a human being is a source of light.