In March of this year, an international group of artists, scientists, architects and philosophers left Argentina on a scientific research boat bound for the Antarctic Circle. At numerous sites on the world’s southernmost continent throughout the next two weeks, artworks, exhibitions and performances were realized.

This week in Venice, The Antarctic Pavilion presents documentation of this 1st Antarctic Biennale, described as “a paradigm-shifting phenomenon in biennale culture: a hot-house in a frozen realm, without mobile phones, internet, ready audience, or escape to another cocktail party”. In advance of the opening of the Antarctic Pavilion in Venice this Thursday, we spoke to curator Nadim Samman about the concept behind this unusual expedition and the experimental ethos of collaboration it has left in its wake. 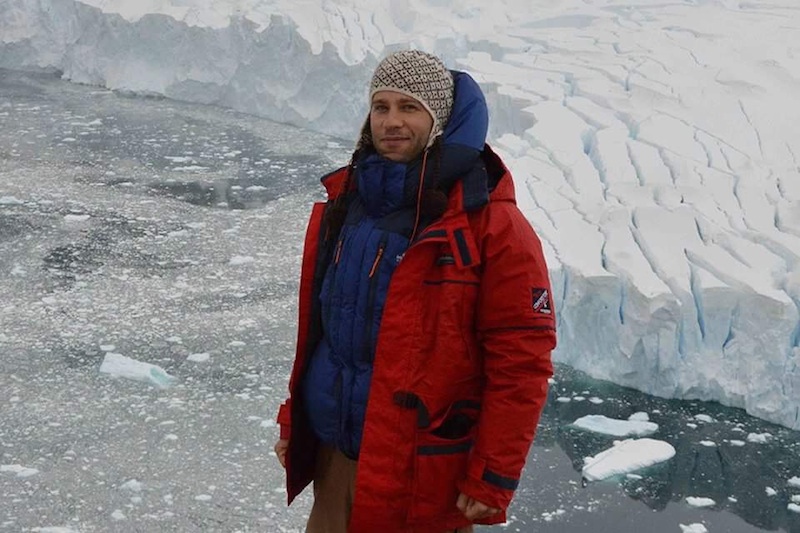 Berlin Art Link: How did the Antarctic Pavilion come about and why did the project’s commissioner Alexander Ponomarev and the organizing committee feel that it was necessary to create it, to represent a landmass without significant population or culture?

Nadim Samman: According to the 1959 Antarctic Treaty, the southern continent is reserved exclusively for peaceful scientific research in the interests of all of humanity (with sovereign claims suspended). Owned by no individual or nation, but home in the summer months to approximately four thousand researchers, this legal and institutional framework is the most successful example of international cooperation in modern history. This fact is even more impressive when one observes that the Antarctic Treaty was born at the height of the Cold War, when geopolitical tensions were most fraught.

The paramount status that the Antarctic Treaty accords to scientific enquiry, incorporating its proscription against the exploitation of natural resources, is celebrated as a model for international conservation initiatives. But in a deeper sense, the treaty is more than this: it stands, we believe, as a foundational document for a new form of universal community. The Antarctic Treaty system suggests an incipient supranational identity based on cooperation and a sophisticated regard for ecology. The Antarctic Biennale was ventured as a celebration of this under-explored implication, proposing intensified exploration of Antarctica’s status as a cultural paradigm. 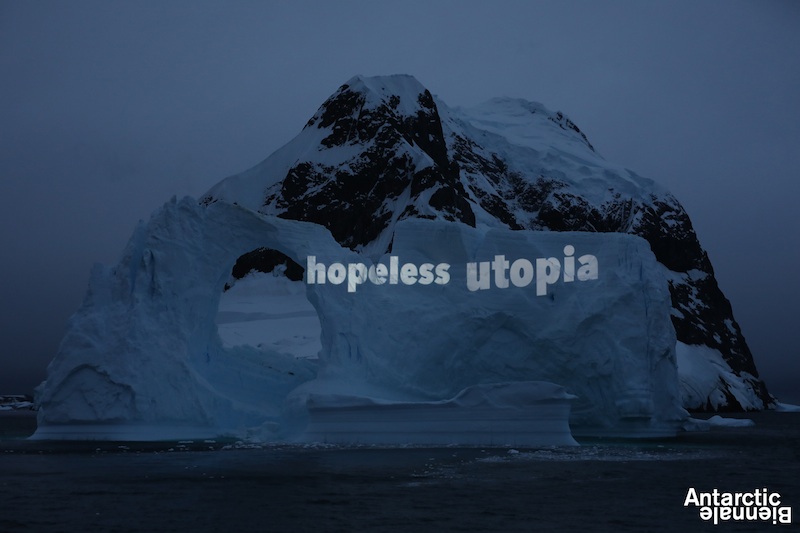 BAL: ‘What potential does the Antarctic imaginary hold?’ was the focal question touched on during the symposia, debates and screening program during the expedition. What answers did the participants find to this question and how is this presented in the exhibition?

NS: The Antarctic Imaginary belongs to everyone, for the reason I’ve just mentioned. And, yet, control over the regime of images associated with it is centralized: for the most part, mimetic production is supplied by documentary photographers and filmmakers ‘embedded’ within scientific brigades, or else adhering to hegemonic interpretive frames. Thus, what passes for Antarctic ‘cultural’ activity assumes a subordinate role to the ‘useful’ research being carried out on bases, or the keynote messages issuing from them via official media relations. Within this structural condition there is little place for non-debentured, heterogeneous, representations of the Antarctic Imaginary. No bottom up. If we are to realize Antarctica’s potential as a model for overcoming fraught international relations, and promote a culture of (global/Antarctican) ecological citizenship, then artists must seize the means of south polar (image) production. It is only through intensified (and truly independent) artistic engagement with Antarctica that we may discover—through aesthetic experimentation—its otherwise inaccessible intellectual, social and political topography. It is this landscape, we contend, that offers the most promising ground for harvesting radical theoretical and practical visions for life in the 21st Century.

The world requires a new regime of interdisciplinary image-making, leveraging the strategies pioneered by artists alongside emerging technologies and empirical studies. The most relevant art of the 21st century must address relations between humans and our multifaceted environment, and develop new representations of living together. It must cultivate deep engagement with cutting edge science, both to widen the scope of what is considered ‘cultural’ and to subject our technological revolution to appropriate scrutiny. The Antarctic Biennale views such interdisciplinary as one of its paramount objectives.

Expedition participants approached the idea of the Antarctic Imaginary from a variety of starting points, from lyrical to concrete. One of our video commissions by Karin Ferrari was a broad-ranging investigation of occult and conspiracy theories surrounding Antarctica, picking away at the continent’s ‘other’ identity in mass culture. Julius von Bismarck offered a wry portrait of the condition under which most Antarctic visits are facilitated: a tropical freshwater fish, piloting a heated submarine goldfish bowl, was able to explore the cold and salty waters of the region, to gaze out from its technological cocoon and meet its saltwater cousins; to go where no fish has gone before. A kind of astronaut, or cruise-ship passenger encased in a comfortable life-support system, this creature’s experience mirrors the artificiality and technological control so necessary to keep human life viable in the southern realm. Chinese artist Zhang Enli installed a giant egg at various suggestive locations. The resulting photo series turns around Antarctica’s potential as a place where new things (ideas and experiences) are birthed. The architect Gustav Duesing developed a new fabric tent shelter system relying only on the structural characteristics of ice to stay erect. As these examples show, the approach was wildly varied. The exhibition is a kind of expedition report; an archive of images (both still and moving) capturing our adventure, and a register of equipment and objects central to the enterprise. 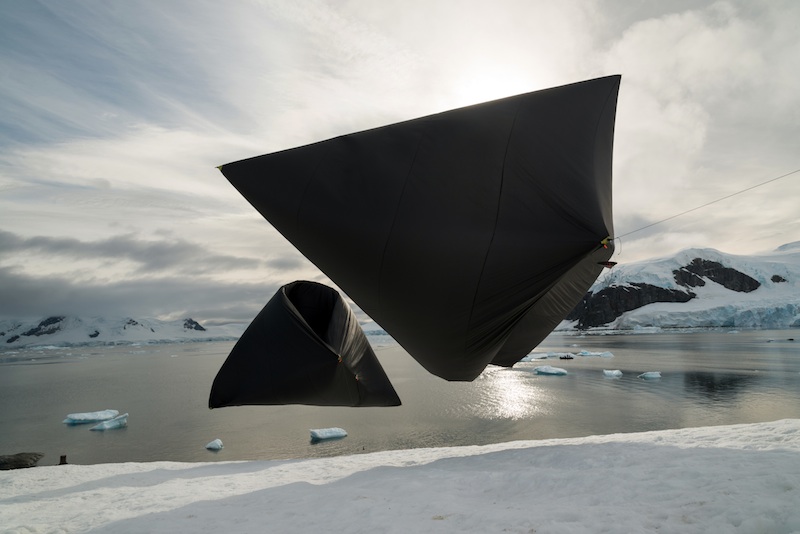 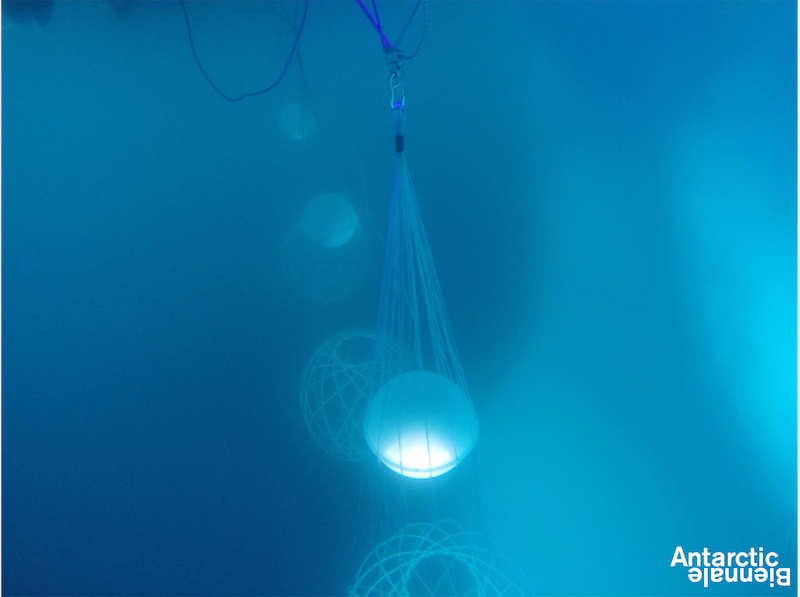 BAL: What are some of the newly commissioned works that were created on the expedition? How will you show these works in the exhibition?

NS: During the expedition we made landfall at numerous sites. At each location, artworks, exhibitions and performances were realized. Mobility, site-specificity and ecological compatibility were key touchstones. Nothing was left behind and no audience was present, except the participants themselves and, of course, Antarctica’s native species. Actions included a landscape photography exhibition for penguins (they didn’t seem to get much out of it) and an underwater installation for whales. In addition to onshore interventions, throughout the expedition, the vessel itself served as a floating studio, exhibition, installation and performance space; a photo lab and conference facility. Onboard activities included symposia, debates, and a daily screening program featuring commissioned videos by international artists. This year, The Antarctic Pavilion presents documentation and found materials. 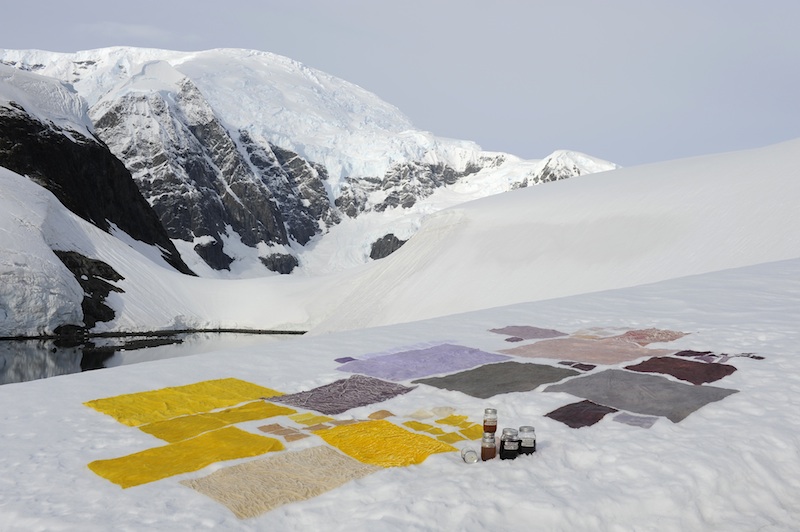 Throughout this biennale everyone was in the same boat. While our expedition is complete, its collaborative outcomes are just beginning: new projects initiated onboard are developing between the artists Paul Rosero Contreras and Juliana Leite, for instance, and LIQUIFER Systems Group; a space architecture company that has built a prototype moon base, as well as a greenhouse for Mars for the European Space Agency. There’s even an erotic novel in the works, issuing from a few people’s insights into how the south polar region shapes desire and social relationships. In the exhibition itself we’re trying to convey a concentrated set of impressions of the journey, and to showcase some of ideas and plans that made this rather unlikely thing happen.