Schöneweide has changed a lot over the past few years. A visit to the Reinbeckhallen revealed that a number of these former industrial buildings have recently been, or are in the process of being, transformed into exciting art spaces. An investor bought the huge, rundown complex by the Spreeufer in 2004, with the aim of transforming them into exhibition spaces and artists’ studio: a plan which is steadily coming into fruition. 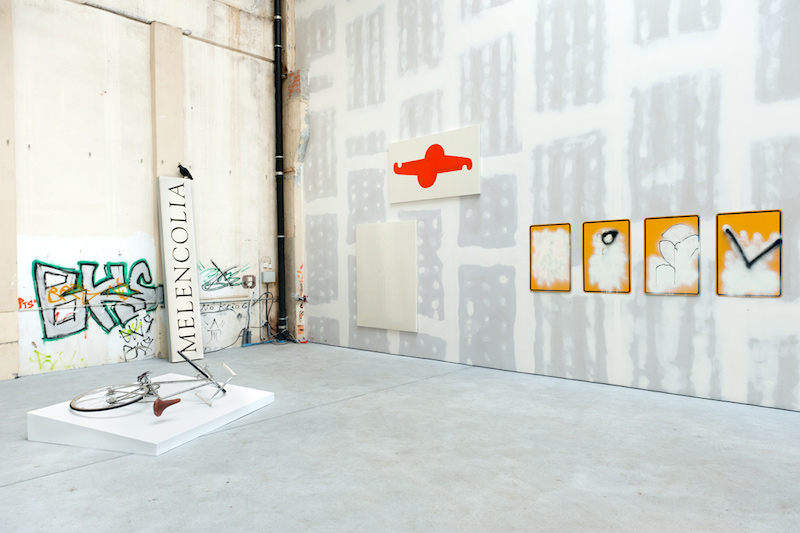 Assorted works from ‘IF THIS THEN THAT(2)’, LAGE EGAL at Reinbeckhallen // Photo by Paula G. Vidal

Pierre Granoux, curator at Lage Egal on Danziger Straße, has an exhibition in one of the halls. The converted space holds two pieces of his own work alongside large-scale collages, wordplay pieces and playful, scattered sculptures. Particularly striking are two large pieces by Astrid Köppe, of vitreous enamel on steel: triumphant metallic renderings that look like they started out as simple block colour drawings. 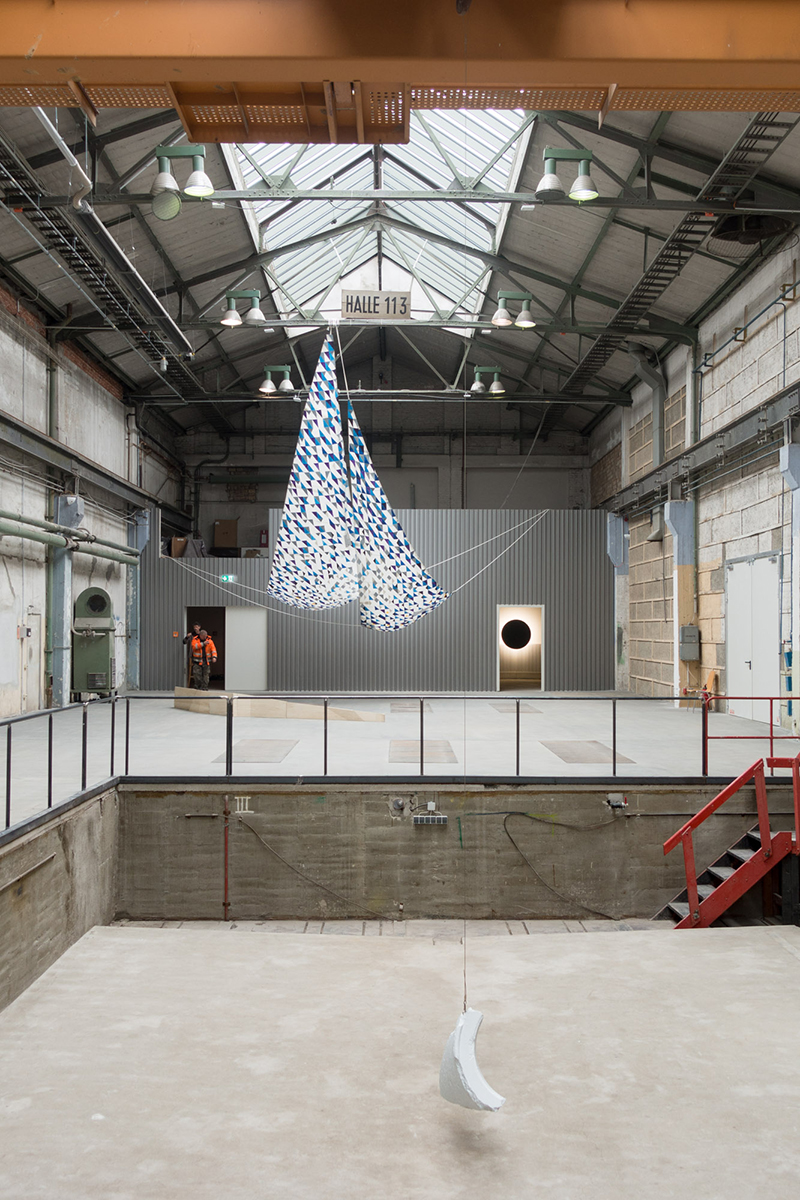 A neighbouring industrial space has just been taken over by Kunst am Spreeknie, a Berlin-based festival founded in 2007, which seeks to highlight changes in the field of applied arts. Their current offering, ‘Social Geometrism’, was a hit at Gallery Weekend. The concept is based on the work of US sociologist Donald Black, who made visual mappings of evolving social phenomena, composed of geometrical lines and shapes, clustered in particular areas. The exhibition map seems based on these designs, with a different geometric shape attributed to each artist. And the map is a real asset for navigating the space, because its industrial history is still very much on show. Platforms, switchboards, beams and pulleys are visible in the huge exhibition hall, and the walls are unpainted, revealing diverse materials and the wear and tear of past production. The contrast between this rough, industrial backdrop and the careful selection of the artworks epitomises the changes I witnessed in Schöneweide throughout the day. The juxtaposition is also exploited to great effect by the curators and artists, some of whom had the chance to make site-specific work. 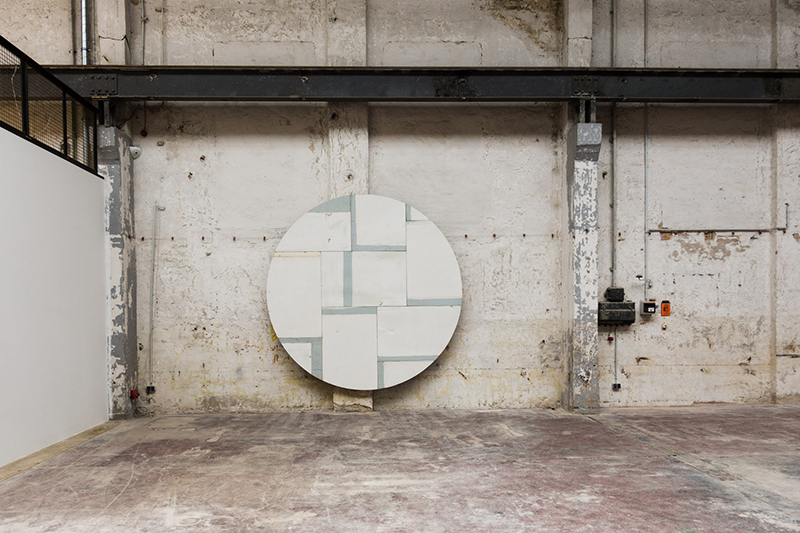 Ossian Fraser’s ‘Ceiling’ is a huge, round disk of rough plaster that looks a lot like it was just cut out of the building. Curator Panagiotis Margaritis tells me that this was exactly the plan: Fraser wanted to bring ‘the inside outside’, to flip a section of the wall so that we could see what had been obscured and had no previous aesthetic value. In the end, Fraser could not get this idea past the builders, but his compromise—making the disk out of waste material from the renovation—involved the builders’ help. 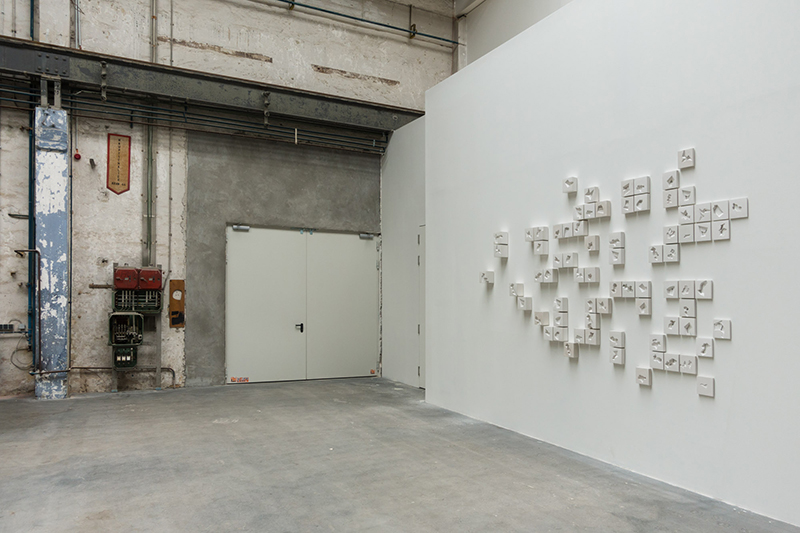 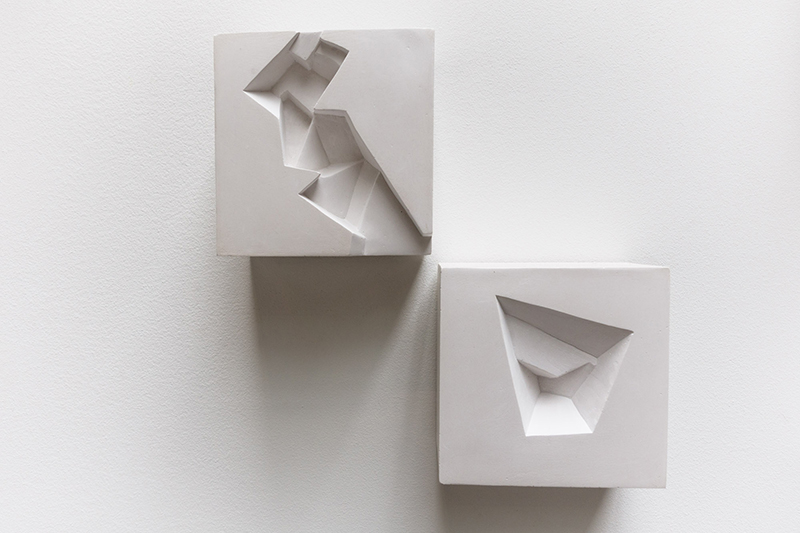 Danish artist Sophie Erlund’s piece, ‘A Gentle Monumentalism’, is a series of white plaster cubes containing 3D cutouts that look like moulds for large-scale production. In fact, they are tiny replicas of Soviet architecture, collected by the artist. Her numerous individual shapes are an unnerving counterpoint to the indivisible unity of Soviet philosophy. The exhibition is a coherent one, seizing on the new ways that people order their existences and exploring the spaces used to do that. Ignacio Uriarte’s painstaking folded paper sculpture has pathos in this exhibition space, so far from an office or a home. Jennifer Oellerich’s photograph is the product of a long exposure in the rain, so that the photo is an imprint of both light and water, an added materiality. 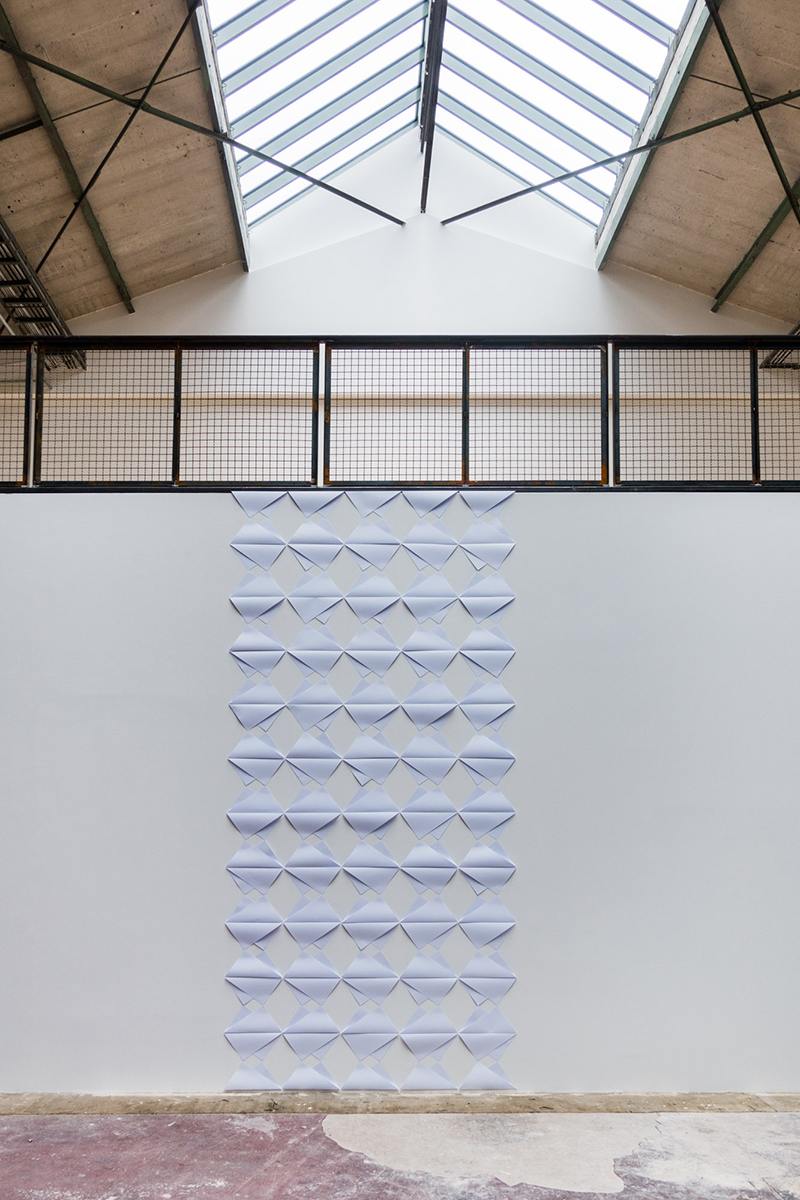 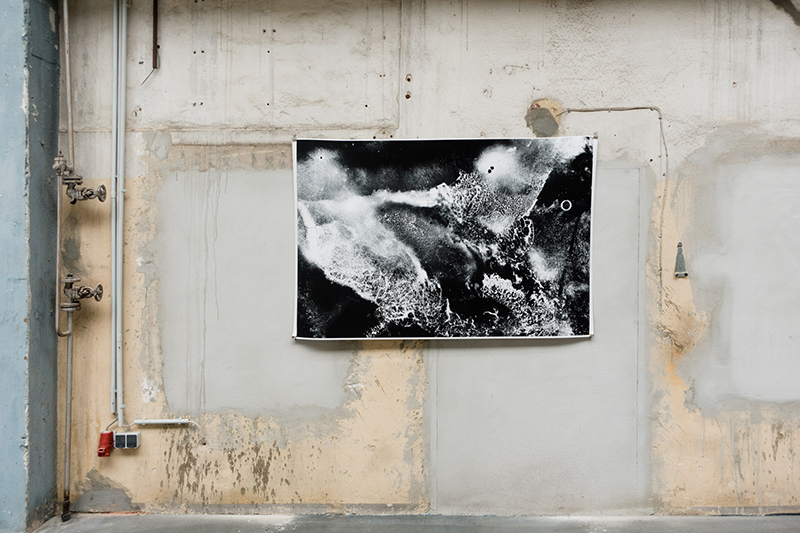 Next door there is a major retrospective exhibition of Sibylle Bergemann’s work. It is a beautifully varied selection of her subtle, striking photographs. They range from fashion shoots to architectural framing, from solemnly sensual portraits of women to panoramic marvels captured on her travels to Ghana, Dakar, Mali and Yemen. I paid particular attention to the photos of cable factory workers in Schöneweide. Gentle shots of self-aware moments of respite, they point at the hard industrial labour that defined this area of Berlin for so long and provide another, slightly uneasy, example of art sitting alongside manual industry. 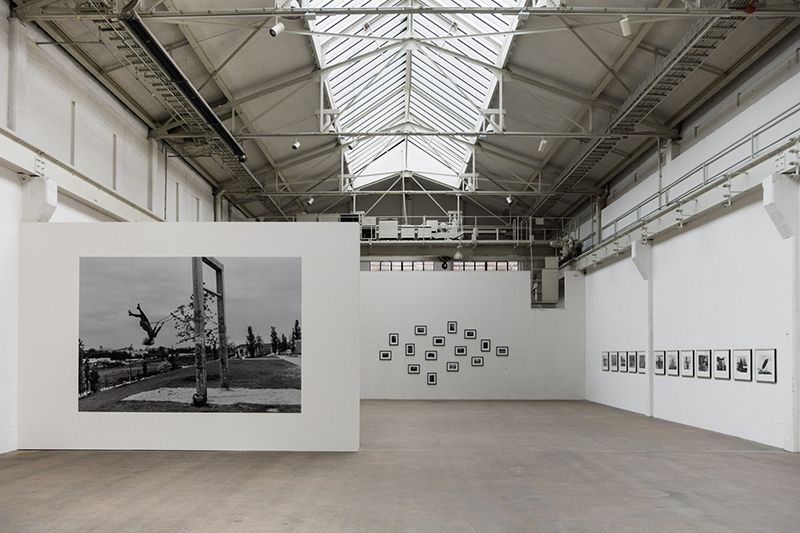 A screen at the back of the exhibition played a series of interviews with Bergemann, when she was suffering from cancer. She exudes a brisk resilience and a lifelong, unshakeable bond to her art form. There is a startling moment towards the end, when she shows photographs of a past home that she and her photographer husband, Arno Fischer, had to leave. A traumatic move that she believes caused her illness. The sense of loss is extraordinary, particularly in such a globetrotting photographer. I paid more attention to the particular locations of each of her photographs on my way out, and came back to thinking about Schöneweide, experiencing so much transformation in such a short span of time. Bergemann’s famous 1980 photo series of the dismantling of the Marx-Engels-Monument in Mitte—and her subsequent obsession with tracking these particular statues—testifies to her fascination with change, and with reading into small transformations. All the works I saw around the Reinbeckhallen shared this fascination: part disgust, part awe, but a certainty of the need to document and pay attention to social change.