Last Thursday, installation was in full swing at Richard Heller Gallery for Vanessa Prager’s solo exhibition, ‘Ultraviolet’. Prager has made a name for herself as a painter with her portraits that more often resemble colorful and rich topographies of paint, blurring the borders between portraiture and sculpture. In the gallery, works were placed meticulously on the ground, awaiting mounting, as installers etched measurements on the newly constructed dry walls. Beeping sounds, originating from the platform lift, permeated the gallery space, located in Bergamot Station. On one of the pieces, a gently glowing tube of neon circumscribed the canvas, something Prager was experimenting with; “It became interesting to me to just put it on like an outfit, ‘here’s how I am today, here’s how I am in this situation’”. Although the atmosphere in the gallery was industrious, Vanessa Prager took the time to speak with us about her work and the upcoming show. 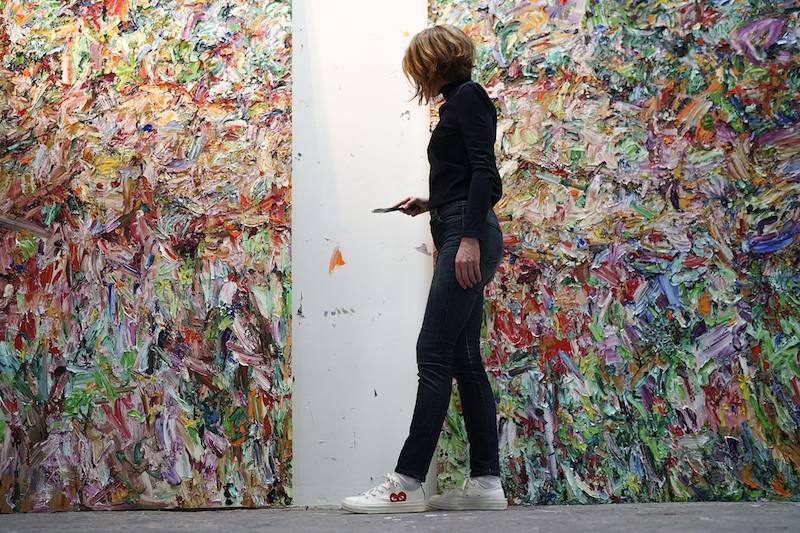 Vanessa Prager in her studio // Photo by Steven Hallock

Liam Casey: You were born in Los Angeles. The city is often revered for its rich patchwork of colors, be that from various foliage, diversely painted apartment buildings spanning multiple decades of architecture, street murals and even the gradients of our sunsets. Your work, too, employs an extensive palette of bright pigments. Can this be traced to Los Angeles’ ecology?

Vanessa Prager: Oh yeah. I definitely use it as inspiration. I used to go hiking all the time in Griffith Park and you can’t help but look around and see the blue skies and how it casts the light on everything all the time. And it’s got a really warm sun, too. First time I went to London I was shocked at how gray it is all the time. It’s hard to imagine a city being a whole different color. But they are. They all are. I also think about the foliage, how we have desert flowers and things just growing out of the cement. I like that. The pavement will have piles of trash and sofas out on the side of the road. And the warehouses, all the weird buildings, many of which are in disrepair, I like all that stuff. It’s really a visually interesting city. 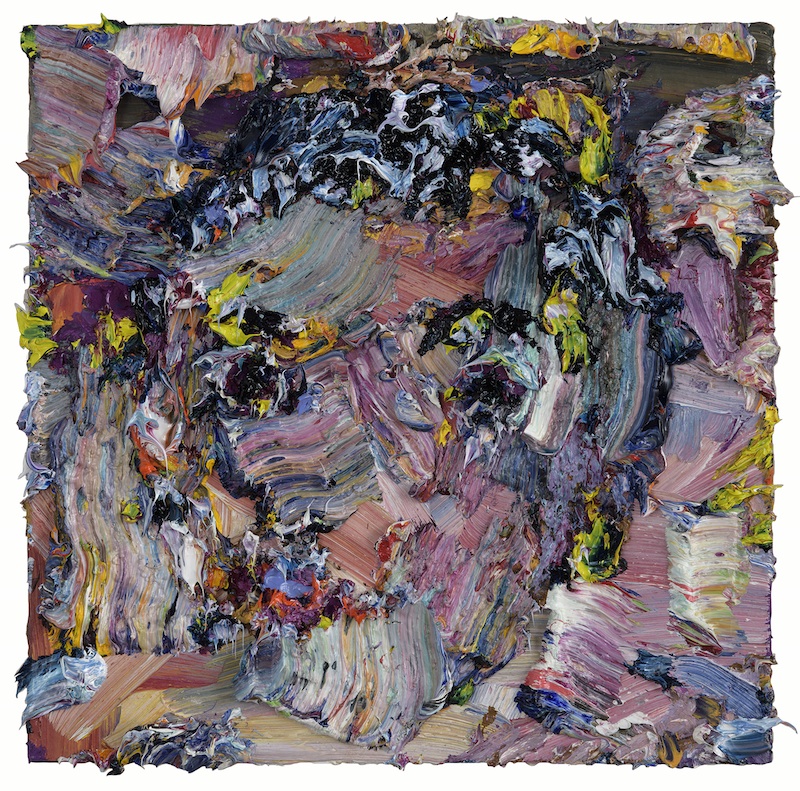 Vanessa Prager: ‘TIme On My Side’, 12 x 12 // Courtesy of the artist and Richard Heller Gallery

LC: From close up, your canvases appear as a rugged and undulating terrain of paint, literally jumping out from the surface. What led to you develop such a propensity for impasto?

VP: I think my tendencies in painting are impatient. I want results now. That led to the messiness of it. I used to try to paint super detailed and it was torture a lot of the time—I was fighting against my own tendencies. So giving way to my inclinations was really helpful, and that ended up being my piled-on method. If I messed something I’d just roll with it, and try to make it better. I think that was just me allowing myself to be me, too, and embracing the ways that I am instead of lamenting, ‘Ah, I wish I was that super detailed painter who could focus on this’. Also, from close up, it’s one image, and from far away it’s another. That was really important to me. I don’t think paintings are as they seem most of the time. So it was important to have the two sides in play.

LC: Even from different angles too, the way the paint emerges, it totally shifts the shape of the painting on the canvas.

VP: Right. And that’s important to me. It’s kind of like a living, breathing thing, and if you sit with it for a while it should show different sides to you and hopefully give you different answers each time. 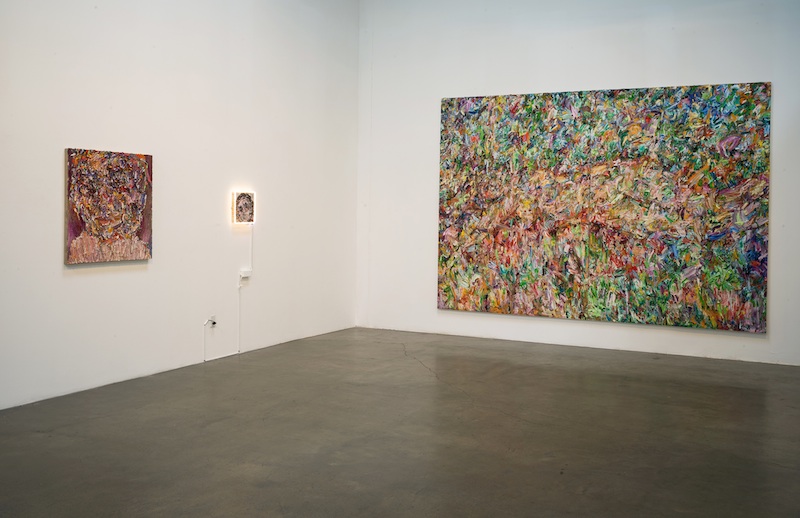 LC: I feel as though your dense use of paint, and the way each application creates its own little geographies, could be analogous to sculpting. Do you see your work more as painting or as sculpture?

VP: I love the idea of sculpture and I’ve thought about moving off the canvas and going fully sculptural. I consider these sculptural paintings, for sure, but I think because [these paintings] are super awkward, they’re always trying to exist in a dimension that they’re not supposed be in.

LC: What do you mean by that?

VP: The paintings are trying to be three-dimensional but they’re two-dimensional. They’re trying to enter this other world that they’re not really a part of. They’re trying to jump out and be in the middle of the room, stand-alone, but they’re stuck. To me, it’s how I feel often. It makes a lot of sense to me to be awkwardly in-between, like you’re always trying to reach for something else but you’re still here. But I do still think that I’ll explore sculpture fully at one point, it just has to make sense. It has to feel right.

LC: Often it is only when stepping away from the canvases and viewing them at a distance that the viewer understands your work to be classic portraiture, albeit enshrouded in abstraction. Some pieces are far more abstracted than others. Would you explain your process of what leads to some works being more or less abstracted?

VP: It’s just like how at times I feel it’s best to just fit in and go with the flow and do what pleases others and what works for that world, and at other times to resist everything and cause chaos and stand alone. It’s that same back-and-forth that I feel with the paintings, and at times it’s okay to blend in and relax and be okay with the world, and at times you’re just like ‘No! Nothing is right and I need to do something and I don’t know what it is’. I’m always thinking that in terms of who these characters are, what they are doing, what they mean. That’s why I feel some of them end up trying to fade away and trying to blend in and trying not to be here or just to pretend as if they don’t exist and then sometimes it’s ‘I’m here, deal with my figuration’. It’s those kinds of feelings that I’m trying to capture. It’s also the idea of what I feel other people are comfortable with. Are you comfortable having a face stare back at you? Or a figure stare back at you? I think that says more about me than other people but it’s definitely what crosses my mind when I’m making portraiture. 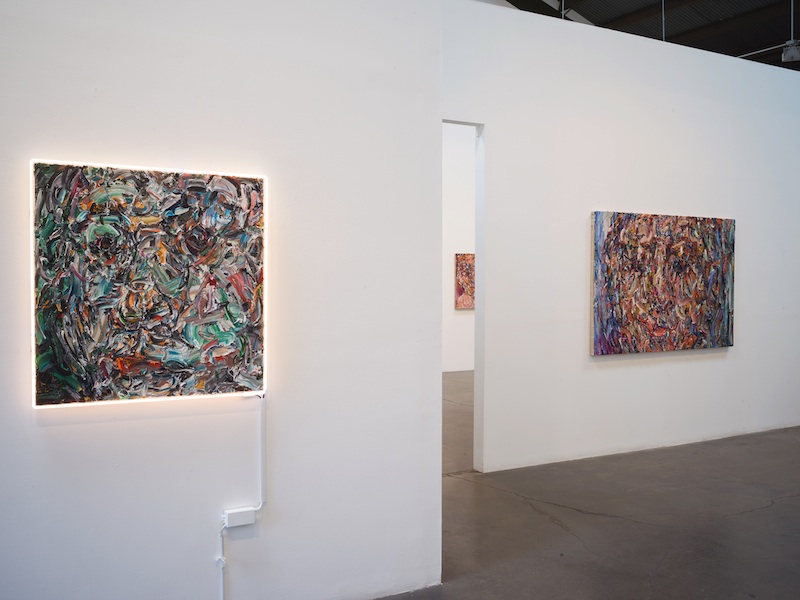 LC: Are any of the portraits of faces you know personally, or simply internal images you’ve projected?

VP: I haven’t used their actual imagery, but starting from a year or two ago I started thinking of people I knew and just trying to throw them into the work. Not actually make it look like them necessarily, but just trying to capture them; it’s a way of owning that time that I saw them and just a way of putting some order into it. But I don’t sit and look at pictures of people, because I’m not really good at looking at pictures. 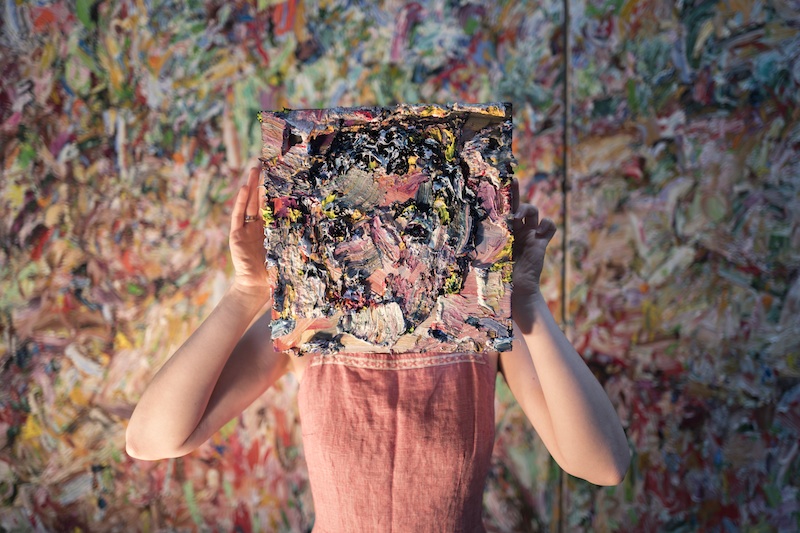 Vanessa Prager in her studio // Photo by Steven Hallock

LC: Your last solo show, ‘Voyeur’, conceptualized ideas of privacy; at times, pieces could only be visible through peepholes. For your show at Richard Heller Gallery, ‘Ultraviolet’, should we expect any motifs to the exhibition’s thesis?

VP: The neon, which is the ‘Voyeur’ to the other extreme. To me, ‘Voyeur’ was the hiding and the covering up and seeing how exposed we all constantly are. But from this angle it’s more ‘Show it all! Here it is, look at it, it’s lit up, how could you miss it!’. There’s a neon frame around it, if you miss it it’s not my problem. So I think it’s a continuation of that last theme. And they’re self-portraits, so they’re very personal to me. What do I have to hide?