“For me art is a yes to life,” declared Christine Macel during a press conference held in Berlin in February and recorded by Universes in Universe. “Art is a response to shock, conflict and uncertainty and it has always been a place for freedom, resistance and generosity,” she continued. The two curated exhibitions of ‘Viva Arte Viva’ are nevertheless surprisingly apolitical and only sporadically connected to the struggles of the present.

The exhibitions proposed a focus on the artist and his internal processes. The viewer experiences a sort of time-travel when following the course of the two curated exhibitions. Catapulted in temporal rhythms that are distant from the urgency of the present and plunged into foreign cultural settings, the viewer finds herself in a space without many references. There are a lot of new artists to discover—belonging to younger and older generations—and their approaches are presented through a lens that foregrounds their internal, sensorial, associative, visceral processes of ‘making art’. An emphasis on materiality, colour, and handcrafted products is dominant, as well as a mixed web of references to multiculturalism and spirituality. 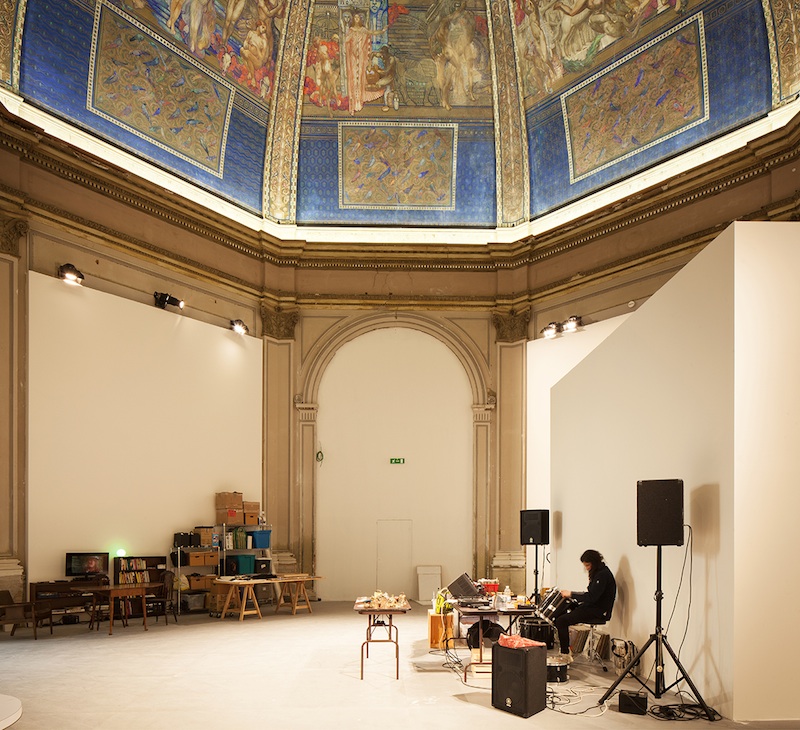 The main concept—that of the performance and manufacturing of the ‘self’—is explored in different tones. The atelier appears as an intimate space of return to the self for Mladen Stilinović, Yelena Vorobyeva & Viktor Vorobyev and Dawn Kasper, who set up her own workshop in the main exhibition in Giardini for six months. The object of art is seen as a visual and tangible form of the ‘self’: the production space appears as a collective fabrication site, as in Studio Olafur Eliasson‘s contribution, which is meant to facilitate refugee integration in Italy. Art also appears simply as a result of ‘hand-mending’ in Lee Mingwei’s ‘The Mending Project’ or Sheila Hicks’ mass of coloured wool spheres, and in the installation of Irina Korina or that of Cynthia Gutiérrez in the Arsenale. We also encounter psychological incursions into the image and consistency of the self in two referential artists’ profiles: Marwan and Kiki Smith in the Giardini exhibition. 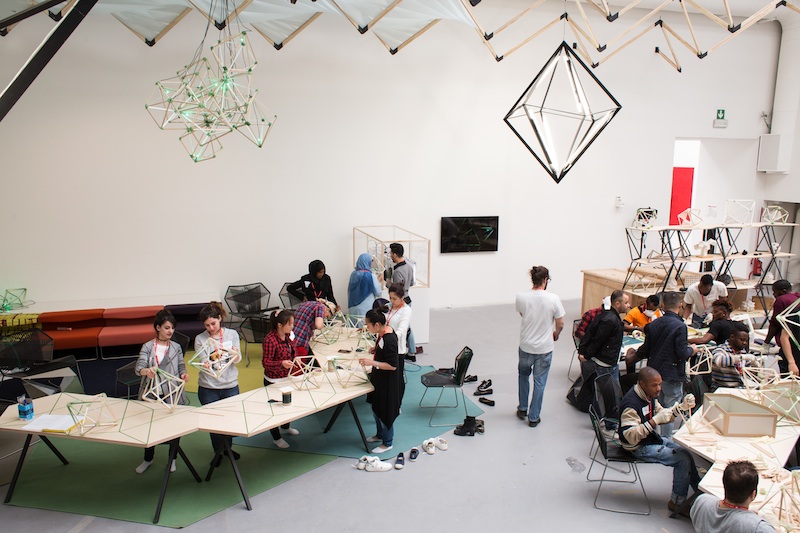 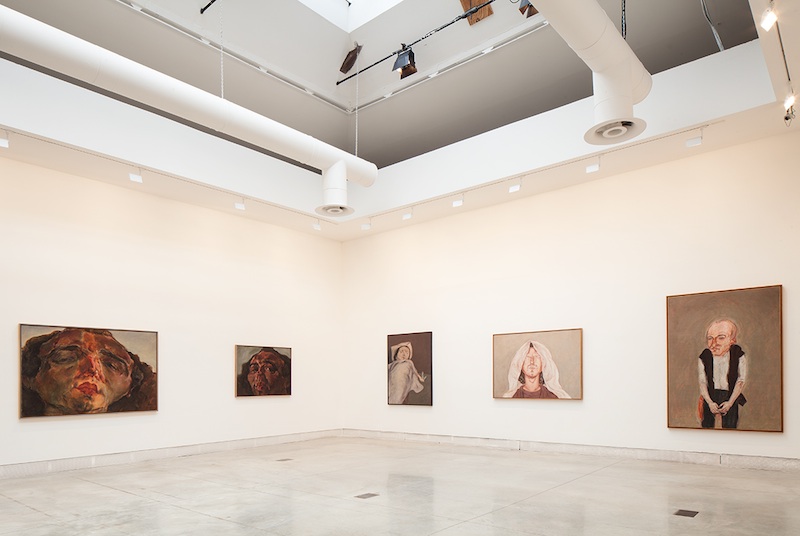 The ‘self’ is staged not only on a personal but also on a cultural level, where the artistic objects become carriers of cultural references and qualities: in the work of Hassan Sharif, the detritus of culture is institutionalized and classified. Multiculturalism meets anthropological approaches in the performance of Lee Mingwei, ‘When beauty visits’, which quotes from a pan-oriental, western-perceived aesthetics and spirituality.

Paradigmatic for this approach is Ernesto Neto‘s ‘Sacred Place’ in the Arsenale. Part of a section of Macel’s exhibition called ‘Pavilion of Shamans’, Neto’s net-tent hosts a group of Huni Kuin Indians from Brazil. At the preview of the Biennale, the art viewers, the Indians, and the artist were all squeezed inside the tent, drinking tea and chanting. Visitors were invited to take off their shoes and enter the sacred tent, and to adopt the role of the participant-observer ethnologist. Watching the exotic tribe chief performing a ‘ceremony’ we ask ourselves what is the meaning of an ayahuasca ritual, without the ayahuasca? The installation is functional in another way, as a small station to rest in the midst of the busy exhibition.

The appeal to spirituality seems almost anachronistic, when seen through an organically textured, low-tech, bricollaged mediation that dominates throughout both exhibitions. We are confronted with an ambience that seems to want to lull us into a deep sleep, far from our digital wars. As it seems, many of the installations could function as therapeutic, back-to-the-roots pills of content, but the viewer is urged to ask himself which roots are being referenced, and whether they are still potent in our multi-technological universe? 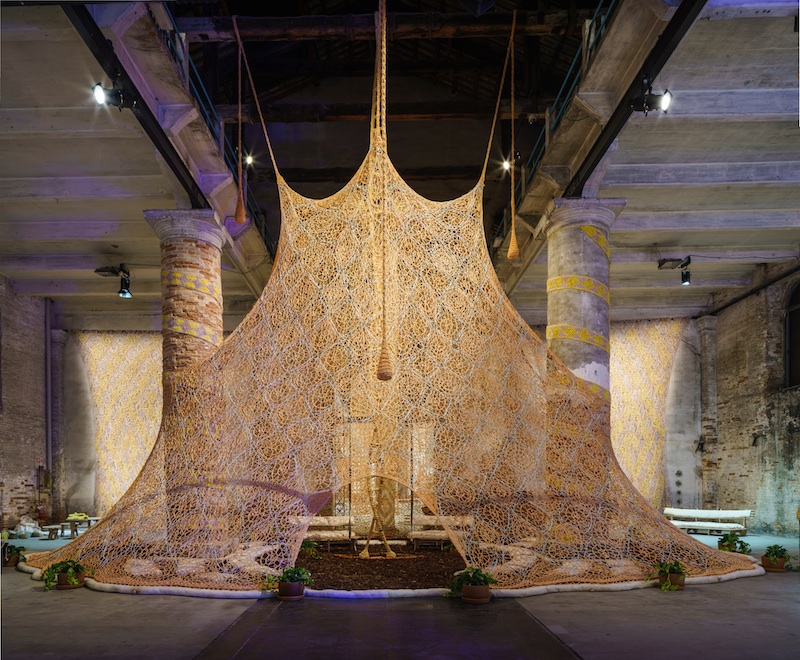 In an interview by Marco Petricca in February at Ca’ Giustinian, Venezia, Christine Macel affirms that she is not particularly interested in presenting newness, but rather a deepness, which can bring new meanings to contemporaneity, independently of the generation of artists exhibited. With a gracious nod toward the role of Italian culture in Western civilisation, she refers to ‘humanism’ as a direction of thinking and positioning in the world that the contemporary individual should work on. Macel expresses her belief in the Renaissance-based universal function of the artist in constructing contemporary culture and our necessity to exteriorize their universe.

Macel indeed creates a temporality in her curatorial platform, which corresponds rather to an interior pace than to what she calls the ‘hyper-momentarity’ of the present. She pleads in the same interview for the power of this augmented temporality to influence our cognitive capacity positively, bringing forth a new type of information. 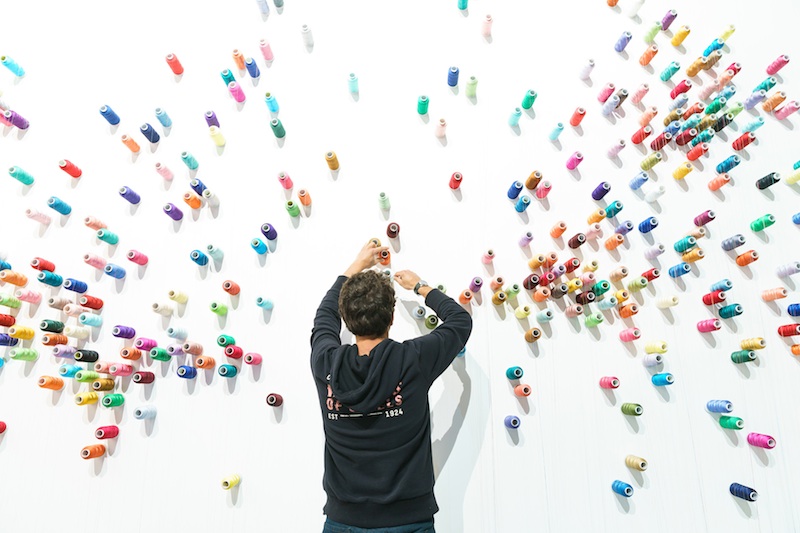 The shows are marked by a universalism that, besides recalling the manifold capacities of the artist as uomo universale, also runs the risk of falling into stereotypes. As viewers, we find ourselves cast into the Euro-centric perspective of the intellectual-discoverer, who plunges into foreign ‘traditions’ as sources of wisdom. Warnings of the dangers of exoticization are surprisingly left out. The mix of Dionysian joys and shamanistic traditions and temporalities (to which the pavilion titles inside the Arsenale exhibition refer) is actually far from politically innocent. A longing makes itself felt: not for a missed inner dimension, but rather for a critical vision to shake up an intoxicated society, nourished with what is pictured as an apolitical self.