Melanie Garland is a Chilean artist, currently based in Berlin. She is a co-founder of nomadicArt, an organisation that facilitates art workshops for migrants, creating a safe space for action and exchange. They also curate exhibitions, organise public art events and collaborate on artistic projects. The group is made up of Berlin-based artists, designers, anthropologists, curators and art theorists from all over the world. Their aim is to help refugees to “enter the public arena despite legal obstacles restricting their mobility and inclusion in social life.”

The organisation was formed as a satellite of ZK/U Center for Art and Urbanistics in Moabit. Now nomadicArt’s projects are divided between Moabit and a temporary refugee shelter near Potsdamer Platz. Along with a few other engaged arts organisations, they occupy an incredible ex-penthouse space on top of the hotel-cum-shelter. The workshops are held there, where there is also a kitchen open to be used by the residents. I interviewed Garland at the workshop, surrounded by a burgeoning plant nursery and pictures drawn by the younger residents of the shelter.

Claudia Grigg Edo: You moved from Chile to Berlin in 2013. Did this move affect your ideas about the line between activism and art?

Melanie Garland: Yes, very much. In Chile I felt the need to be much clearer about my positions, when thinking about whether social engagement is art or not, or if we are political or not. Can art be political? Is it always political? All these questions. I felt I had to stick to one line because otherwise it got too crazy and confusing, you end up doing nothing clearly. But here in Berlin I feel that so many of the artists I know are not only artists. For example, the directors of ZK/U: they are artists, they manage a cultural centre, they do art-related social work, and they provide a platform so that other organisations and art collectives can work there. In Berlin the lines between disciplines feel a bit more blurred and you end up realizing that art can involve everything – not only tangible creative production by individuals. Art can be an invisible moment.

That was very interesting to us when we started nomadicArt. We decided to form an arts collective but we were still asking the question of what that meant. Are we collaborating on shared pieces, or working separately on our own projects? And slowly we realised that we are a platform. We connect people, we give space and tools, we give some direction without setting rules. And we stand outside and provide some graphic representation of what just happened. And that is the art piece: how the different facilitators are engaged with artists and with the community. 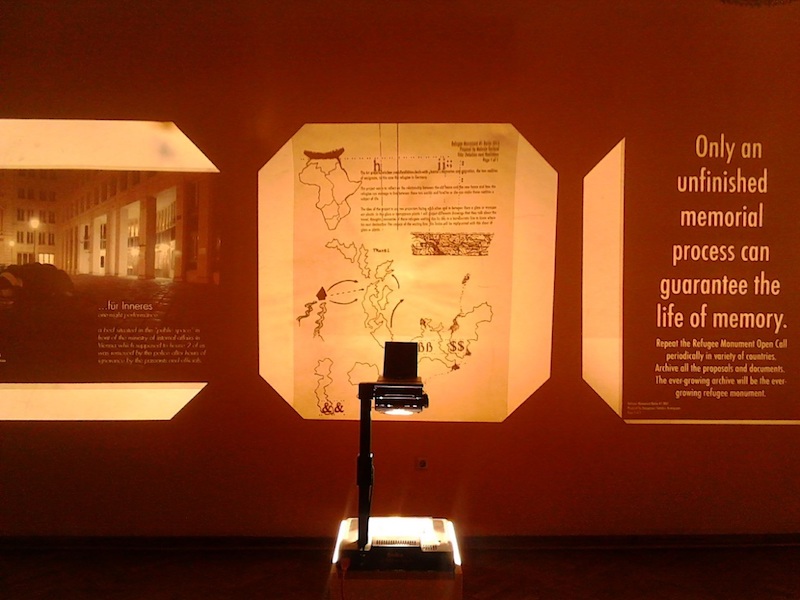 CGE: Do you think your art and your aims have become more political since moving to Berlin?

MG: Yes, I think so. In Chile, I was always interested in society and art’s reflections on the social. But I think I was less political and less of an activist. It was more like silent, individual research that I was getting on with. It was more about my personal immigration, or my personal life. But then, suddenly, here in Berlin in 2015: boom! There was this huge influx of migrants that you couldn’t avoid: it was visible in the city, on the street. It was such a material change, and it made political responses more material. It made me more aware of my position in society, how it changes and to what extent I have control over it. I thought: art is not only aesthetic. It isn’t only an experience. It can help integration; it can function as a meeting point to get to know each other and to make another society.

It is also important to say that part of the mission of NomadicArt is to ask these questions: to always reflect critically on the artist’s role in society. 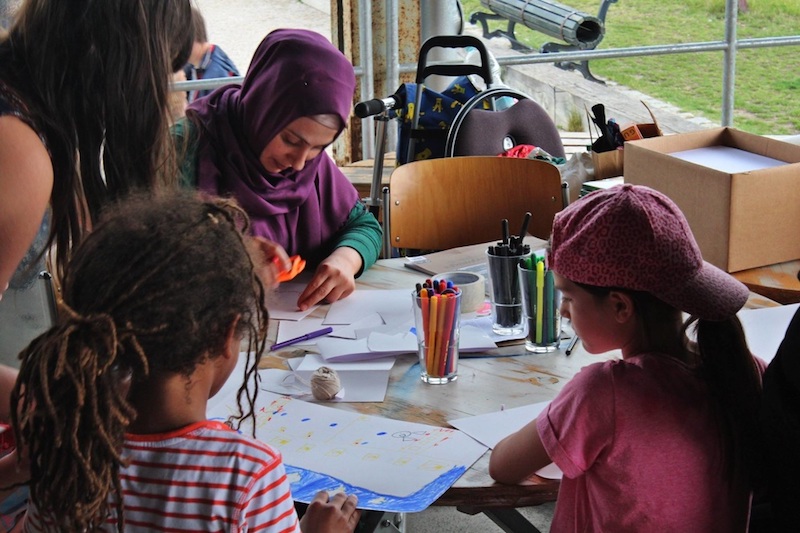 Image from Creative Workshop in Berlin, 2016. Courtesy of nomadicArt

CGE: What are the aims of the workshops that you currently provide for refugees?

MG: Although we provide arts workshops for refugees, we are not that interested in teaching art. Our workshops provide tools and skills: photography, painting, etc. But our aim is not to force participants to learn these techniques. If they want to learn them, that’s good, but it’s more about having a safe space where they can meet and, through art, start to slowly talk about where and how we are. I think it is interesting that the members of nomadicArt are all immigrants. The fact that we are not German—we are outsiders—makes us less intimidating to the participants, I think. Of course, there is a key difference between us and them: we are voluntary immigrants, they are forced immigrants, often dealing with a lot of trauma. But we can talk about finding our way in the city. For example, I can talk about when I first arrived from Chile. And that is a good starting point.

CGE: Do you see a conflict between the functional aims, of creating a shared safe space, and aesthetic aims?

MG: For me the major aesthetic duty of nomadicArt is figuring out how to present the experiences that we witness and facilitate in workshops, events and art actions—how to communicate what goes on here with the outside world. We are trying to find new ways of showing the experiences of immigrants, and that doesn’t mean forcing things to run in a specific way, but it means presenting the information we receive in different, new and experimental ways. For example, using voice recordings of the workshops to create a sound installations that give a sense of the atmosphere of creation inside the workshops. And presenting this alongside the words of the refugees. 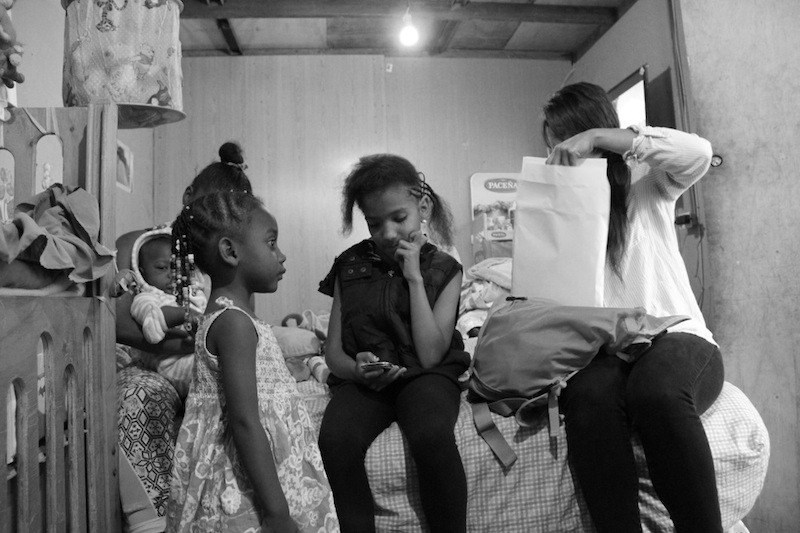 CGE: What is the most difficult thing about being a coordinator of nomadicArt?

MG: Everything! No, no. [Laughs] The most difficult thing… The members of nomadicArt are all from different cultures. We’re from the Czech Republic, Israel, Canada, Austria, Germany, England, Switzerland and Chile. We all have quite different ways of getting things done. These totally different systems are fascinating to me. But our different ways of working can make coordination a difficult task.

We are in a constant process of being very critical about hierarchies that appear in the group. It is important that we are all equal, that we make decisions together, but that we also trust each other to make some decisions on our own, for example when leading workshops. We want to be a cooperative, more than a hierarchical organisation. This means it’s important for us to be open with each other, to say what we like, what makes us uncomfortable, and so on. God, it would be so boring if everything was perfect! I like problems! They’re constructive. We are in a constant flux and are critical of our process. We are always working with integration, both inside the group and outside. I feel that, by exploring these topics, nomadicArt can be more in touch with the conflicts that all migrants experience day-to-day in Berlin. 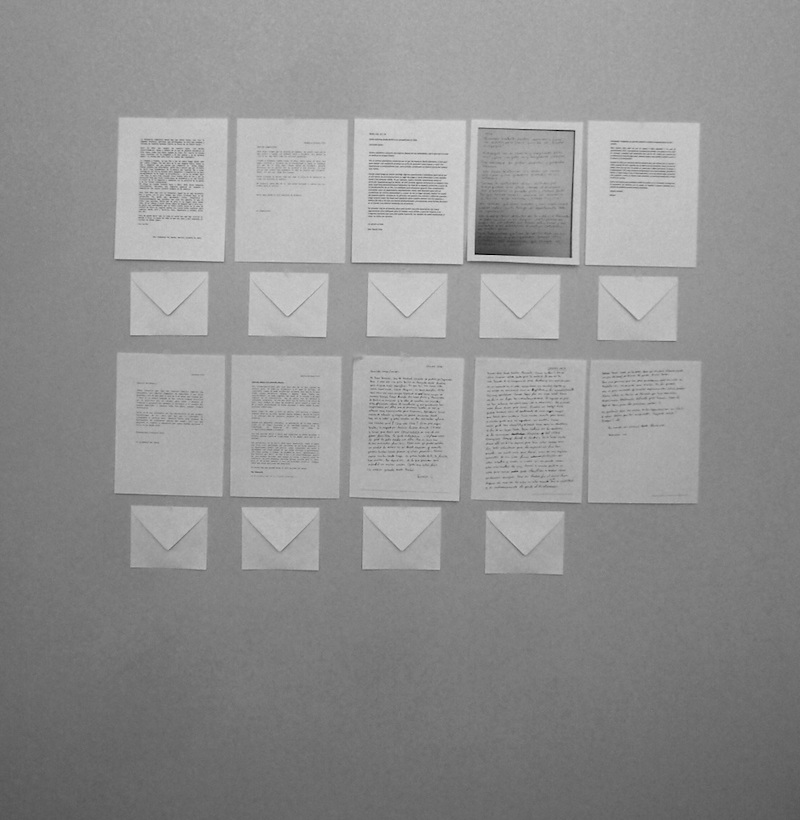 CGE: Tell us about your letter project.

MG: The letter project is ongoing. It started when I was working in different refugee camps, in Berlin, in France and in Italy. While I was in each one I would tell the residents: “Next, I’m going to a refugee shelter in France, to do workshops there. If you like you could write a letter to the residents there, to share experiences and encouragement, and whatever else.” At first, just five refugees wrote a letter, then twenty, then forty, and now I have around two hundred and fifty letters. I send on the original version, totally anonymously, to a letter-writer at another refugee shelter, but I scan all of them first to make a copy. I’m forming an amazing archive of anonymous experiences of Syria, of the journey to Europe, of life inside the refugee shelters and of settling in a new city. I have just been invited to go to Turkey to continue it there, which is very exciting. I was supposed to go last year, but it became too dangerous so the funding was retracted. 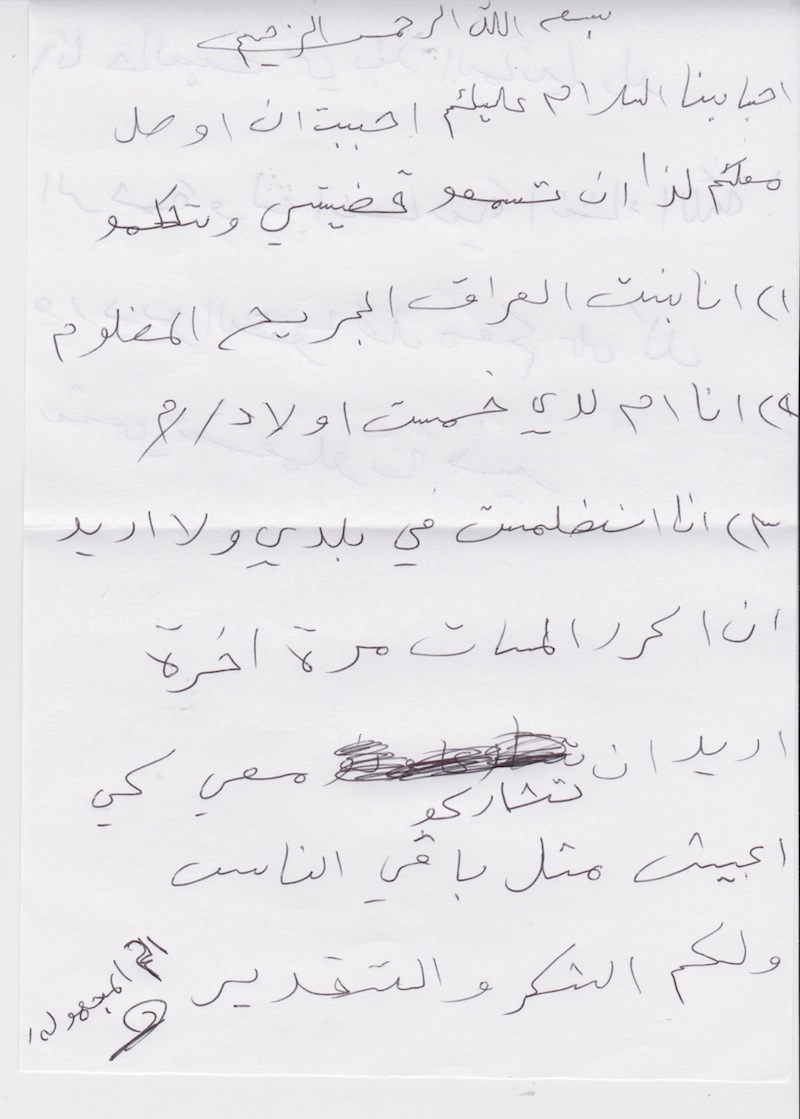 CGE: What kind of workshops and events are you running at the moment?

MG: For two years in a row, we have been given a very generous grant by the women’s centre, S.U.S.I. This means we are able to provide some great workshops for women in the shelter. At the moment, we are doing a portrait and storytelling workshop with girls aged between 10 and 14. We are in the very early stages of this one, so we still have to win over some trust. Many of them have a lot of trauma. And also a sewing and costume-making workshop with older women, with the mothers. From June there will be a photography workshop, and from September we will have ceramics and film, too.

In terms of events, we are working on a project called ‘Moabit Stories’, which explores community and change in the local area. At the beginning of June we curated one of the regular Speisekino evenings at ZK/U. We provided great food and screened a film related to migration. In June, we also participated artistically in Moabit’s Gütermarkt, a hybrid market of local produce and critical discussion that takes place in the neighbourhood. We had a portrait and storytelling stall there. There was genealogical portrait drawing and a continuation of the letter project within the community of Moabit, to archive the stories and anecdotes of our community. We have an exciting few months ahead!