What are the implications of an artwork that is funny? This question arises when artistic production extends beyond conventional gallery contexts and begins engaging with forms of mainstream media. Whether contemporary art that is entertaining can have the potential to be deeply critical is a divisive matter. Historically, art has been distinguished from popular media, owing to the former’s measure of seriousness. Within ‘Block Three’, the latest production of online artist-run TV channel Conglomerate, humour is entangled with sober critique, mockery and appropriation. In this way, the gulf between art and popular forms of media is not only bridged, but expertly fused. 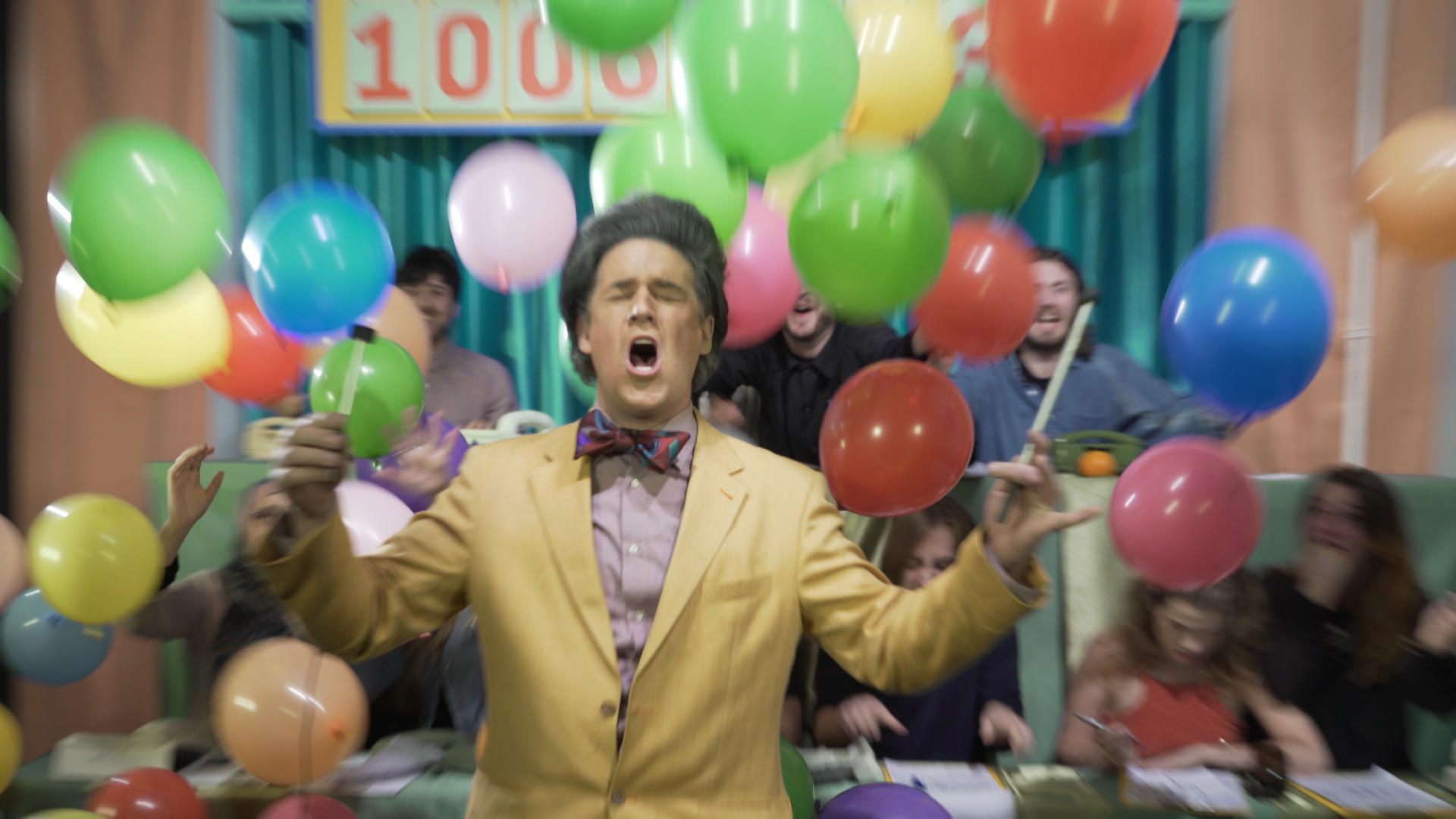 Conglomerate, Still from ‘Telethon,’ 2017 // Image courtesy of the artist and Conglomerate.

Conglomerate was realized by Berlin-based artists and filmmakers Sol Calero, Ethan Hayes-Chute, Derek Howard, Christopher Kline, and Dafna Maimon. Block Three is the latest edition of their collective project, in which they invite artist contributors to submit work to their TV channel, as well as feature work from their core team. By staging the work of various artists within a format associated with television, both the content of popular culture and the status of art comes under fire. At the same time, watching Block Three feels like transcending everyday banality into a bizarre hybrid world, where reality is mixed with surreal fantastical constructions. 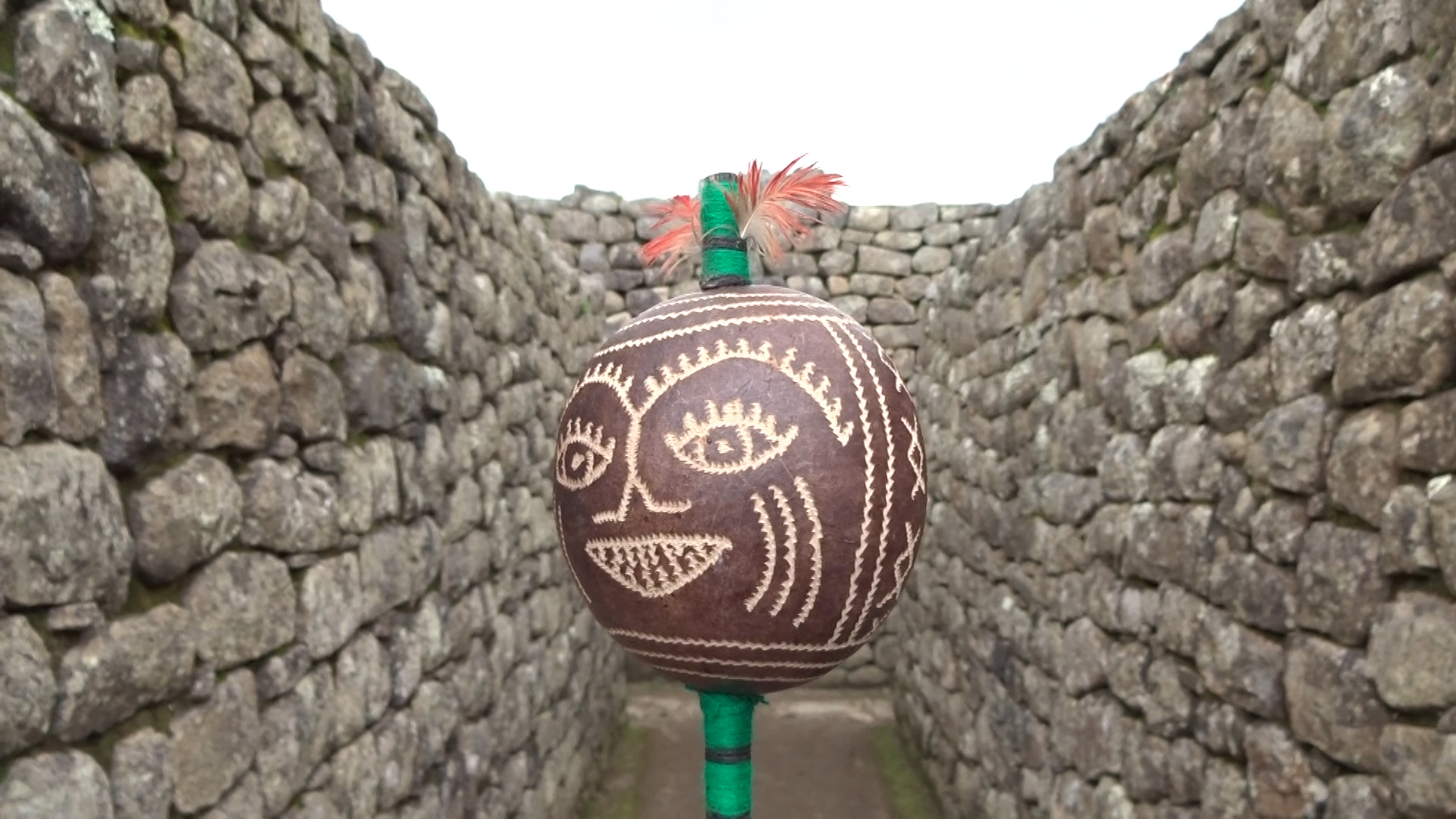 Block Three begins with a shot of a stone enclosure in Peru, and soon the foreground is invaded by the visage of Marco Montiel-Soto‘s wooden maraca. As if warning the audience of the absurdity they are about to witness, the maraca-head turns from right to left, scanning its audience before shaking its head in disbelief. This segment in Montiel-Soto’s ongoing project ‘Tratado de maracas’ mocks the heroic concept of the artist-as-explorer. The short clip introduces a feature pervading much of the work displayed in Block Three; visible self-consciousness about its status as an artwork. None of the works included seem to take themselves too seriously. Yet they exhibit this knowingly, without losing the cutting critique enmeshed within the comedy. 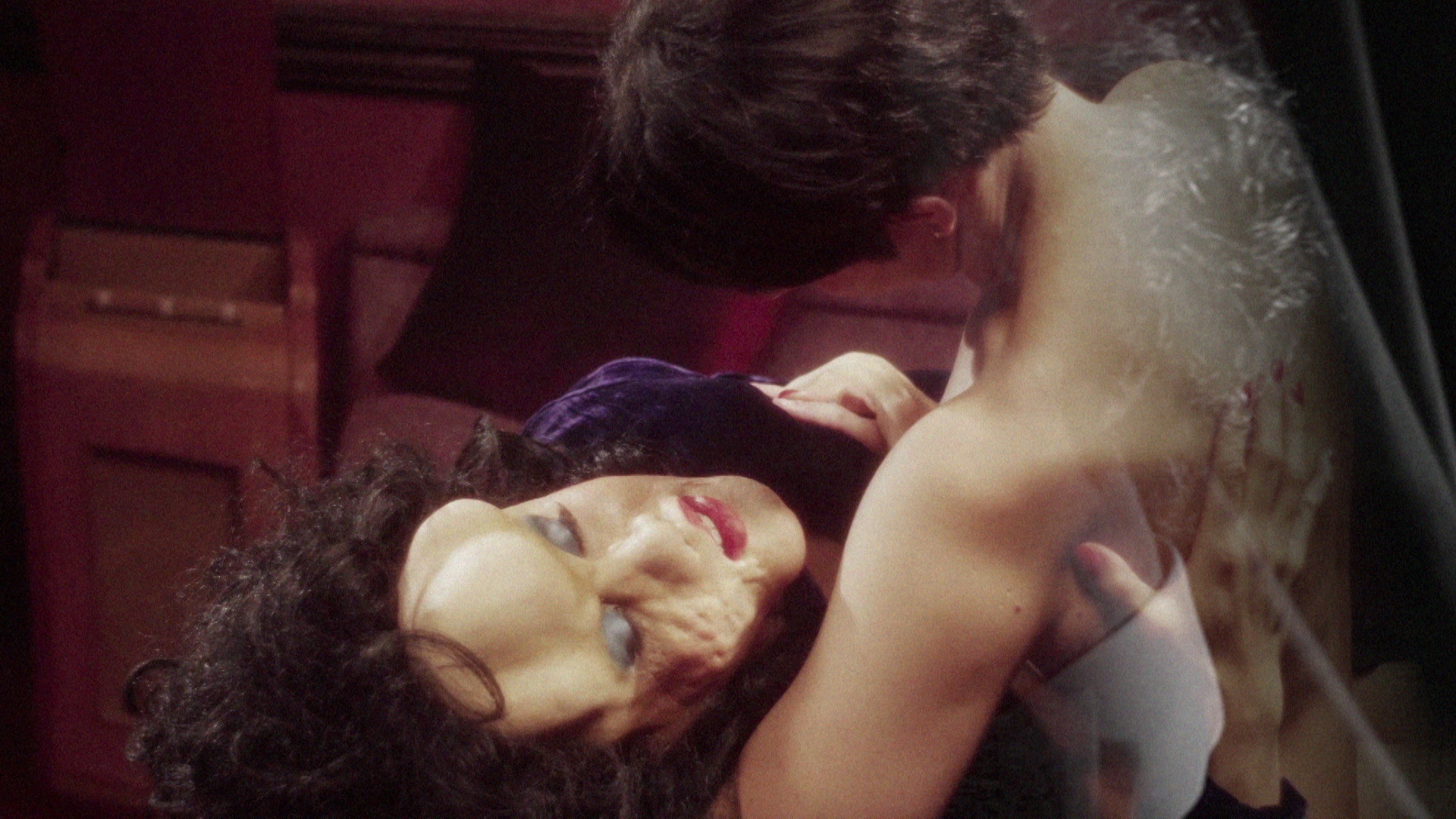 Ming Wong, Still from ‘Blue Elephant’, 2017 // Image courtesy of the artist and Conglomerate.

The premise of Conglomerate’s Block project is rooted in the collective’s disillusionment with the limited life-span of video work within exhibitions; they address this issue by making their channel available for viewing on their website. The project also provides a platform for solidifying a community of artists working in very different modes into a single work. This collaborative vision is apparent throughout Block Three. Packed succinctly into half an hour, the channel encompasses disparate tones throughout. The viewing experience ranges from chuckling at the downer protagonist of Camp Solong‘s promotional commercial, to discomfort at Ming Wong‘s ‘The Blue Elephant’, in which clips from David Lynch films and Wong’s own filming create a schizophrenic depiction of fragmented identities. Some pieces are returned to later in the screening, whilst others are left in suspense. Occasionally in between shows, clips of Avi Krispin‘s bird-headed mascot writhing flirtatiously upon a sea of feathers provides titillating commercial breaks. This jolting of responses makes for a lively channel-surfing experience. 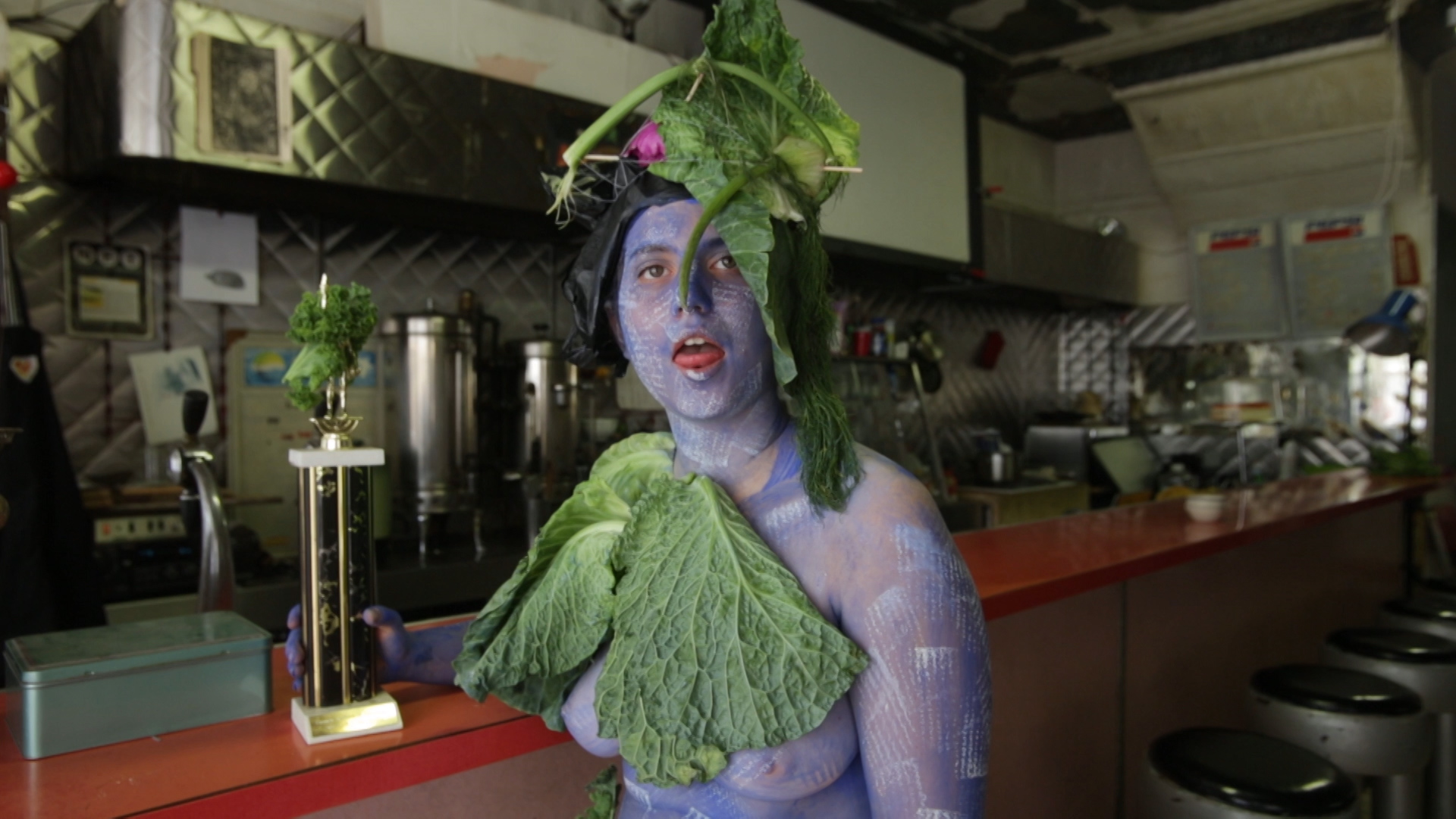 Melanie Bonajo, Still from ‘Single Mother Songs from the End of Nature. A manual. DIY intimacy in the digital body’, 2017 // Image courtesy of the artist and Conglomerate.

The humour and enjoyment of watching Block Three is largely a result of Conglomerate’s coherent curation of starkly different artworks into a vibrant moving-image collage. This is apparent in the duration of each work. In a segment from Melanie Bonajo‘s ‘Single Mother Songs from the End of Nature. A manual. DIY intimacy in the digital body,’ we see a woman painted blue wearing an outfit made of lettuce, standing in a kitchen interior. Casually clutching a plastic trophy, she sticks her tongue out continuously as if posing for a triumphant photograph. This is all that happens. Because this shot lasts about a minute, its ridiculousness steadily climaxes. Through Conglomerate’s unique endeavour, it has been proven that these artists can successfully fulfil the golden mantra of stand-up comedy; the content is essential, but the success of the final impact lies in the delivery.