Like proper witches, the BRUJAS collective shifts shapes: they are a skate crew emerging from the Bronx in the past few years, as well as an apparel design collective, party hosts, and a facilitator of workshops on topics ranging from material feminism to urban herbal foraging. As an organization lead by femmes and women of color, their productions are indivisible from their politics—especially in such male-dominated worlds as skating and streetwear—and truly engender the iconic phrase of Audre Lorde: “Caring for myself is not self-indulgence, it is self-preservation, and that is an act of political warfare.” The following interview was conducted with a few of the core members of BRUJAS: born-and-bred NYC artists, athletes, and warriors. 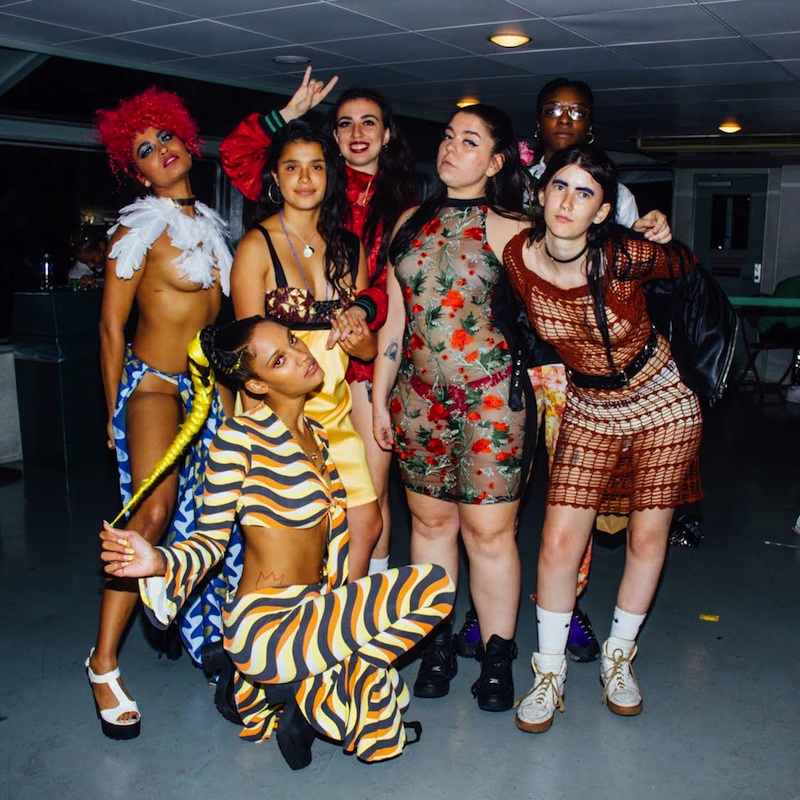 Nat Marcus: The fields of art, design, and activism blur together through your activities. What kind of taxonomy do you employ? For instance, do you define skateboarding as an art form? Is all streetwear utilitarian art? Is organizing parties? Or are your productions all a matter of BRUJAS praxis?

Arianna (AR): Absolutely. Each piece has an equal and crucial role to upholding BRUJAS praxis. Our primary productions are of 3 categories: streetwear; video and graphic visual content, which is designed to engage our base on political movements and ideas; and something we’ve come to call “experience” — workshops, parties, hikes, games, skate meetups, etc. The overarching thread that pulls it all together is education. We want to be the anti-school: the leftist think-tank for Generation X.

Allowing the clothing, content, and experience to drive our work leads to a free-form aesthetic. It’s adaptable to each production or project, and it’s part of a non-essentializing politics that allow people of all racial, ethnic, and gender backgrounds to define for themselves what it means to breathe and feel in this world.

NM: The feminist Marxist scholar Silvia Federici, with whom BRUJAS has collaborated before, has written widely on “the Commons” as a communal space historically defined by women-lead agricultural practices. In my eyes, the BRUJAS forcefully establish a sense of the Commons in the urban space of New York by skating in this city. How do you define the relation between your work and the (re)establishment of the Commons?

AR: At a point in its early urban history, “kicking around wood” (skating) would be considered one of the more “unproductive” things for us to do. Subcultures usually form around such unproductive—in the capitalist sense of the word —activities. But capitalism, in its evil brilliance, finds ways to enter any space and extract value from it. Today’s multi-million dollar skate industry, as well as media companies that push skateboarding-related content, are a byproduct of this. BRUJAS is a rebel response to the commodification of this sub-culture dedicated to gathering in public space, re-establishing the Commons through public activity and community-building. It is no surprise that BRUJAS, led and directed primarily by gender non-conforming femmes and women, are leading critical dialogue around cultural production, public space, and economic justice for non-dude creatives. We exist in the historically driven void of any economic or cultural infrastructure for women.

Antonia (AN): The Commons, at its core, is what unites us all, because we are all searching for some degree of community and happiness, and our work aims to create opportunities for people to gather in a range of spaces. The herb workshops teach participants of our urban community to identify plants growing here, ones that can be used medicinally. Through this exchange we connect with our bodies, cultures, history and autonomy. To know how to grow your own food, or make your own medicine, is production that has been co-opted by the market, and we (especially urbanites) depend on external production and marketing in order to obtain the things we need for our survival. This cycle dissociates us from ourselves, the land, and a sense of self-sufficiency and survival. So we learn to make things not only for ourselves, but for our community. 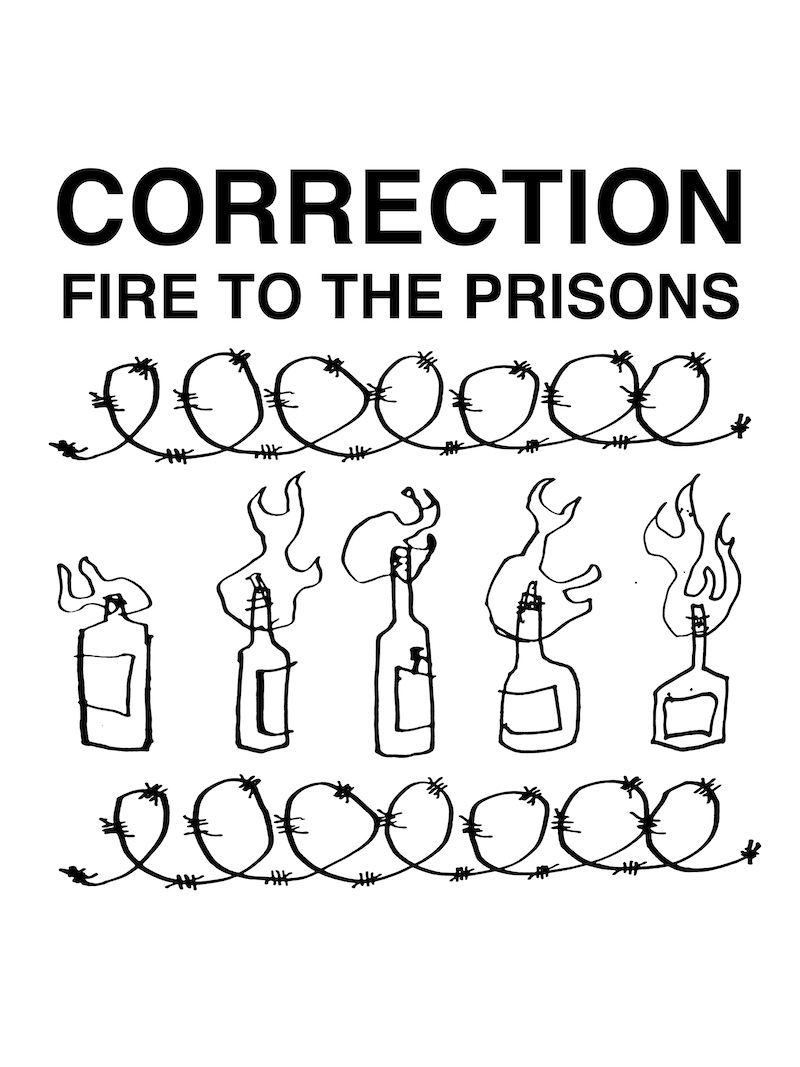 NM: The BRUJAS collective has engaged with art organs and institutions such as the New Museum and MoMA in New York City, as well as Art Basel Miami. How do you position yourself in relation to the “art world”—as artists producing utilitarian (rather than blue chip) art, and as anti-capitalists (in these temples of the art market)?

AN: I do not understand the art world at all, but as I learn more about it I am coming to understand how museums and galleries are part of the apparatuses of aesthetic and bodily discipline. They often normalize capitalism and white-, cis-, hetero-supremacy. But we have had really positive experiences with Recess Gallery, The New Museum, Future Archives (the upcoming radical art fund that I definitely see as being BRUJAS’ major partner in the “art world”) and MoMA, who have kindly offered us their educational resources and had us perform a Dada-inspired disruption at their annual ‘PoP Rally.’

I don’t know though, if the art isn’t young kids throwing rocks (whatever form that takes — records, paintings, t-shirts) I don’t really care that much about it. So if BRUJAS is that, I’m glad somebody is recognizing it as art. Its functioning could potentially be the most difficult thing to actually accomplish in our age of hyper-militarization, surveillance, fascism and neoliberalism. These institutions need to actually be bailing rebels out of prisons if they are really about art. 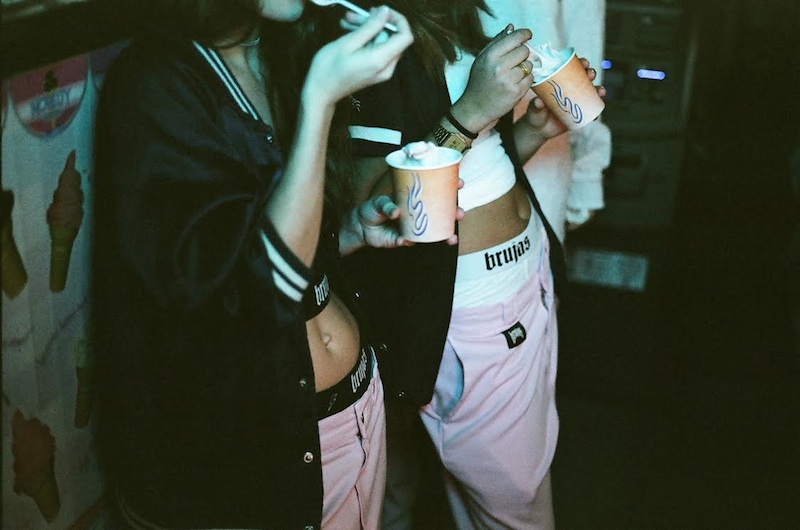 NM: Leftist and anti-nationalist politics are “hot” right now in fashion: Balenciaga’s remix of the Bernie Sanders logo in their Fall 2017 collection, Eurotic’s EU-branded scarves, “FEMINIST” shirts by Topshop, etc. Whatever the intention of its producers and wearers may be, I think we can agree this trend represents no radical gesture against the systemic oppressions of today. How does your streetwear differ, from its message (or lack thereof) to its models of production and distribution of profit?

AR: Anti-colonial resistances have developed their own “aesthetic” throughout centuries. However, if that is only manifested in a visual manner, it doesn’t really hold much weight. We’ve always talked about punk being an attitude and not a look. BRUJAS is for the punks, and none of these brands making political accessories are punk.

In the U.S. right now, the majority of economic activity centers around information, and BRUJAS primarily engages in economies of information. We have taken on the task of trying to figure out what cooperative business solutions, where work is fairly compensated, look like in an information age. We don’t sell to major distributors, but are developing our own radical strategies around distribution, hopefully paving the way for other youth-owned streetwear brands to have more power. A lot of small, youth-driven labels can’t pop off without co-branding with big companies or getting co-signs from designers, and are often severely under-compensated in relation to the value they bring.

I argue that a working-class wage is still defined by an alienating relationship to labor, one strictly based on the fact that people are working for a wage, meaning they are not owners of their production. Whether the garment is made in the U.S. or Honduras, oppressed people are producing value for others. These problems in capitalist production are huge, and are going to take us years to tackle in the right way. For now, we relish that we have been able to harness some of our value by having our own line and original content. But we know that the road ahead is long and complicated when it comes to these issues.

Rebecca: Also, our intention was never to make a clothing brand. The logo on the merchandise was created by one of our members to use on flyers for parties and gatherings, and it developed from the simple idea of putting the graphics on a t-shirt as well. We reached out to friends and locals who had access to screen-printing materials, we made it work out of pocket; our friend from the Bronx did a lot of our printing in small orders for us, and we kept production in the family as much as we could. So the difference between us and the mainstream fashion world is that we produce for our people over profit. 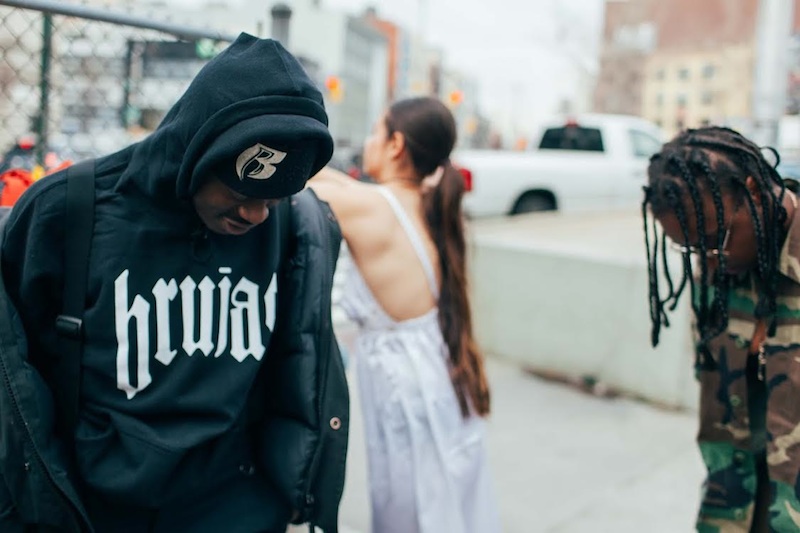 NM: Venus X (GHE20G0TH1K Magna Mater) has invited BRUJAS to host and DJ at her ‘Freak Pharmacy’ parties, and appears as a kind of predecessor of your collective’s ethic. What advice might you have for collectives or individuals—artists, skaters, activists—who might look to you as a model?

AR: Venus is a genius at creating space and facilitating it with the best medicine: music. We hope to continue the legacy of creating space to be free, and elevating the sounds and ideas of young people who are singing and creating in the name of freedom. I will always be GHE20G0TH1K because of the way it transformed DIY for young DJs in NY.

My #1 advice is to be open to challenges, knowledge, mistakes, and always be humble to the centuries of knowledge and resistance work that have brought us to this point. Our generation tends to draw too much from personal experience as a knowledge source, which matches up well with the popularity of identity politics and a sort of “post-truth” internet approach to political dialogue. People have been fighting, writing, and learning together for as long as humanity has existed, and studying the history of struggle and political movements is crucial to combating cynicism. I personally find comfort in the fact that I will die before the world is just, as so have many people before me, and we just have to fight anyway.