How can we sufficiently express the meaning of ‘territory?’ It is often connected with the presence of an authoritative figure, and with the feeling of being watched. Currently, protection of specified zones is strongly enforced and surveillance holds an increasingly ubiquitous position within our everyday lives, whether through the extensive monitoring of our internet searches or border controls. If an individual is asked to express their understanding of this abstract concept, they may gesture with their arms or attempt to barricade an area with their body. As a phenomenon instinctively undertaken by animals and humans, territoriality in art often falls short of fully expressing the feeling. Even live interactive performance struggles to express territory effectively. Despite the difficulty, Marguerite Humeau‘s work is centred on representing these kinds of enigmatic processes. Renowned for being an exceptional researcher, the artist has created her new work for the Schinkel Pavillon, entitled ‘RIDDLES,’ which incorporates mythology of the sphinx as a guardian of passages. 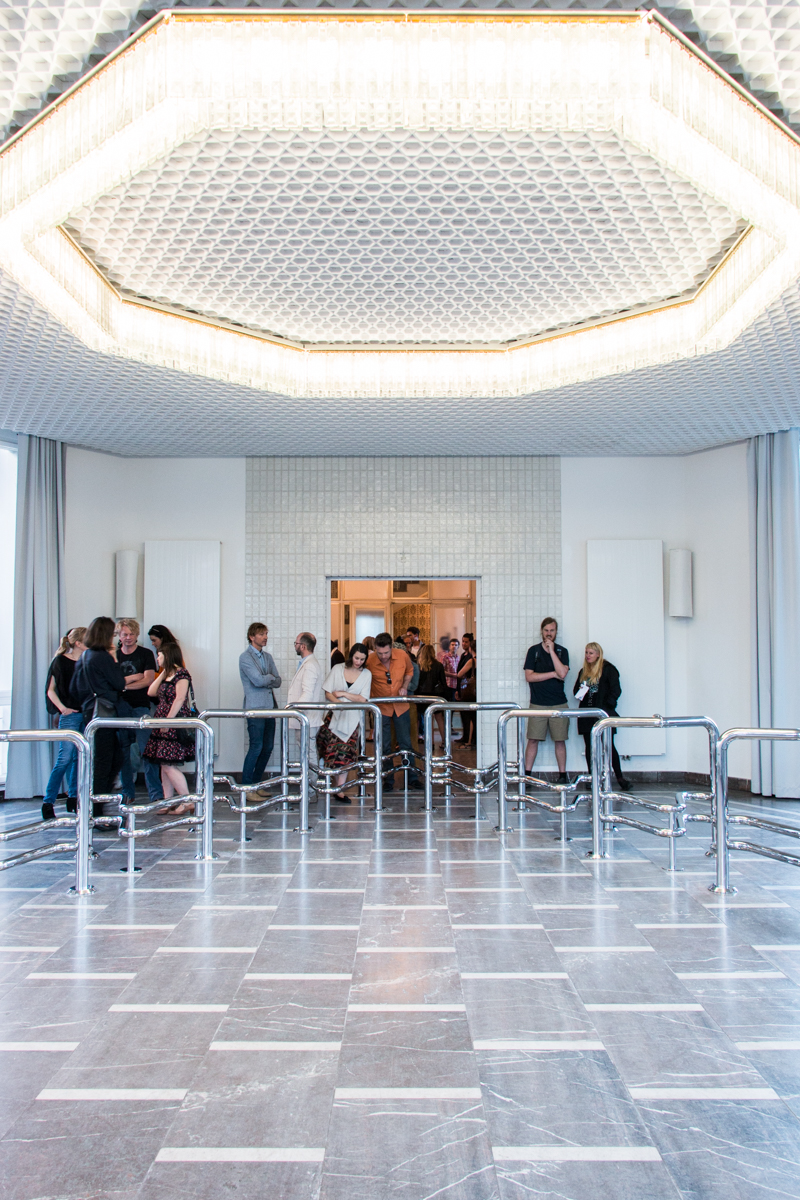 ‘RIDDLES’ extends around the top circular room of the Schinkel Pavillon. Initially, the piece appears simplistic both in its construction and layout. The use of sensors and metal structures have featured in a previous installation called ‘RIDDLES’ for Clearing Gallery in New York; this work seems to be a derivation of the earlier installation, where the metal aspects have been isolated and boiled down to their essential skeleton. The repetition of the forms make encountering it in its totality seem like confrontation of a vast army. It resembles a collection of radiators, or zimmer frames, not to mention their overt link to border control barriers. By barricading you from freely occupying the space, the austere structure generates an irritating reaction. But irritation soon gives way to tension. It is not your space that is being invaded by an unruly creature, but you are trespassing on the territory of an overpowering force. By integrating fictitious myth with the aesthetic of contemporary information technology, ‘RIDDLES’ gives tangibility to the victim-blaming effect of surveillance and territory. Humeau demonstrates how history has a habit of repeating itself. At the same time, Humeau manages to turn a group of static sculptures, constructed from a repeated selection of steel structures, into a lively and unsettling experience.

Within the muted colours of the curtains and light structures around the Schinkel Pavillon’s circular room, the shiny surface of the installation seems to fuse blandly with the room’s interior. Yet after extended interaction with the industrial monster, it reveals itself to be a form of self-initiated performance. Having been laid out in a way that denies our movements across the room, the installation enforces trajectories upon the viewer. In this light, territory is portrayed as grounded in exclusivity, but also the urge to control something that moves threateningly near to invading its space. 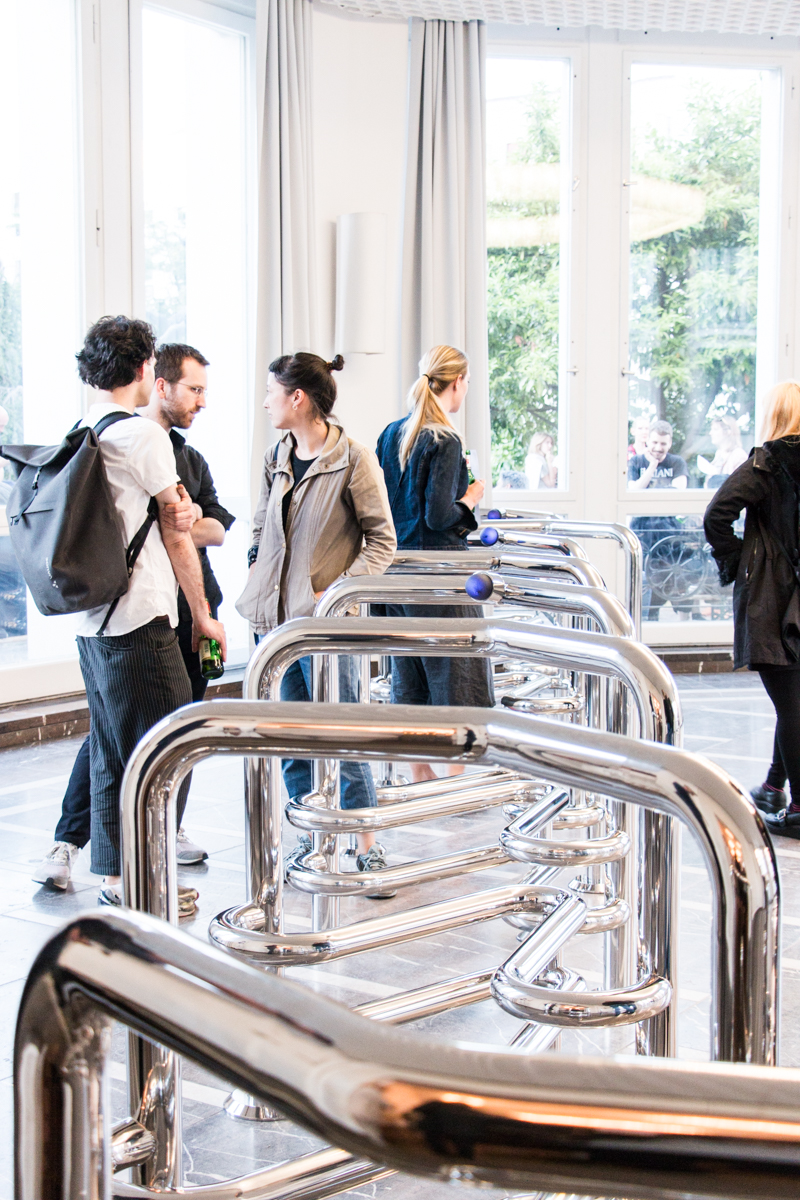 Passing along the metal barriers, movement sensors light up and trigger isolated sounds from speakers positioned around the room. Some audio sounds like an object plopping into water, another noise cracks like breaking bones. Humeau has spoken before about how she aims to create a ‘disembodied presence;’ the disconnectedness of these sounds from the physicality of the installation testifies to this idea. Their disjuncture animates the space, but also instigates a disorientating effect. Although live performers are absent here, Humeau’s work veers towards the performative through its dependence on the viewer’s movement to activate the recital; in addition, the boundaries between passive onlooker and active participant are blurred. Another layer is added to the complexity of the piece, through its ability to deface the viewer’s identity. We become part of the coding behind this strange system, consequently making us hover in an uncomfortable void between the status of insider and intruder. Yet the significance behind forming this new identity for the viewer communicates an unsettling notion: that territory’s existence is dependent on difference, on designating another figure as other. 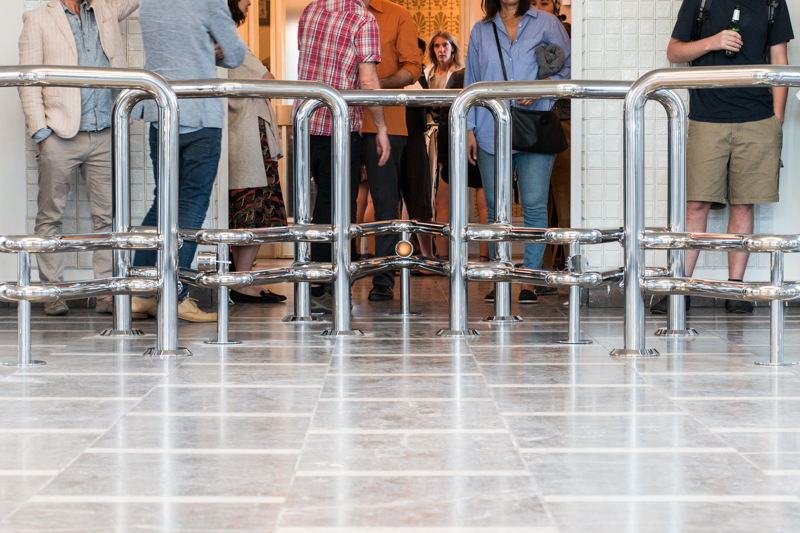 Those acquainted with Humeau’s previous work may be disappointed at the lack of her usual figurative forms and bright colours within ‘RIDDLES.’ Through a relatively simple technical setup, Humeau has created a disturbing commentary on our fixation with defending territory. Despite this, the space within the sphinx’s enclosure is notably empty. With that gesture, the piece gains a final new layer of meaning; that the concept of territory is an inward-facing and vacuous construction. Moreover, it needs to react to something; without the viewer, the sphinx is immobilized. Despite the austere appearance of the work, Humeau’s return to audio-visual minimalism has demonstrated her artistic strength in her ability to communicate complex ideas that often require more than some steel and abstract soundscapes to effectively crystallise.