The exhibition ‘Ladies Night in Lascaux’ by Hope Esser and Liz McCarthy, now on display at Exgirlfriend Gallery in Steglitz, offers a new narrative explaining the Lascaux cave in Southern France. The cave’s deep chambers are adorned with some of the earliest known paintings, created over thirty thousand years ago, which had been lost—sealed inside the cave—until their rediscovery in 1940. Along with suggesting an origin point for art, the paintings are uncannily expressive despite being so unfathomably ancient. They are thus distant and profoundly strange, and yet exert a compelling pull on their modern viewers that has inspired much projection and speculation. Despite desperate attempts to achieve scientific solidity, the caves have been unable to escape the sphere of fantasy and myth. 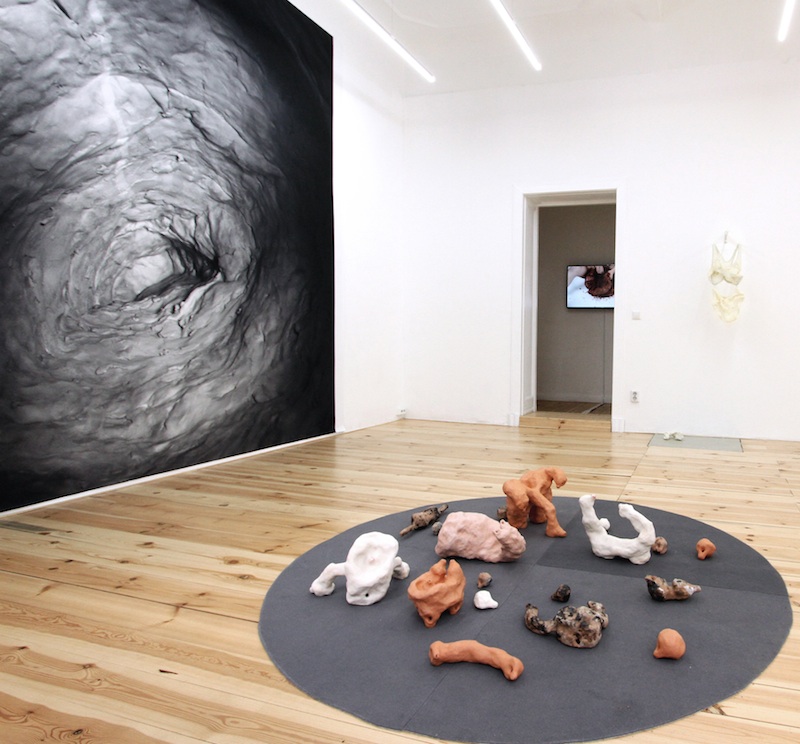 Esser and McCarthy acknowledge this discourse and its limitations, but rather than refuse it all together offer their own, blithely fantastic, account in which the paintings were made by women, and not as devotional rituals to an earth-mother fertility goddess but as décor for the original, ‘underground’ dance club. McCarthy’s work most directly references the “primitivism” of, if not Paleolithic artifacts, then at least the 1970s when they were invested with new significance as mythic cult objects. Visitors to the exhibition are greeted by a mural photograph of a clay vessel interior, which, magnified, resembles a vaginal cavity or cave. On a circular mat in front of the mural the piece ‘Whistles Built for Many’ is displayed: the vessel is discovered to be one of a collection of anthropomorphic whistles with multiple orifice-like mouthpieces. In a performance at the opening, Esser and McCarthy played these collaboratively, wrapping their bodies around each other and the whistles to create sounds with the eerie, wet, breathiness of wind blowing through caves, which McCarthy describes as “warning sirens from the past.” 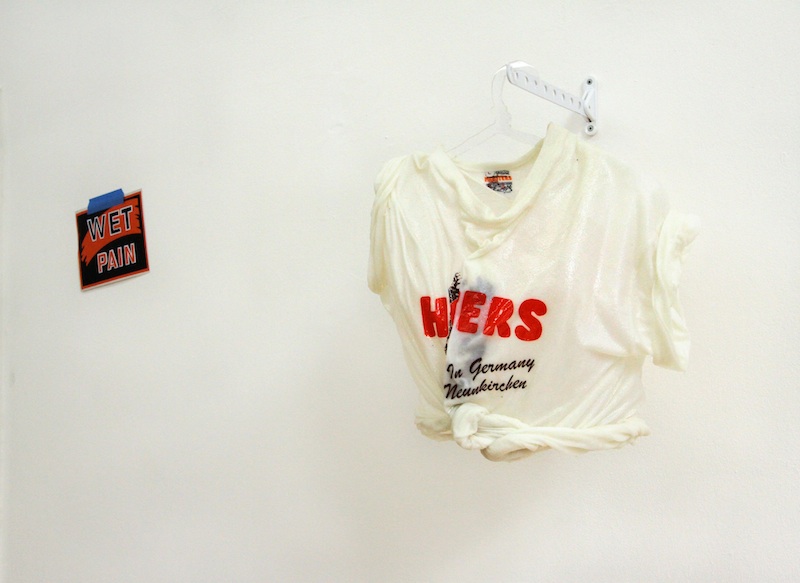 Esser’s work deploys a different set of material and semiotic strategies more directly connected to contemporary imaginaries. Across from McCarthy’s organic mural, Esser has installed a set of underwear hung on a hanger and coated in heavy layers of resin and crystallized Borax—left over clubwear glittering with the calcified drippings of millennia. In another resin-impregnated “wet t-shirt” installation, one of the iconic HOOTERS souvenir shirts—this one in German from a local franchise of the American brand—has been folded to read “HERS” across the front, suggesting a reclamation of the female body from objectification and the double fetishizations of sex and commodity.

In remobilizing the body-as-canvas trope in the context of the cave, Esser closes the loop opened by McCarthy’s equation of cave and body. If the cave is a body and the body is a cave, and both are points of origin and of passing into death and oblivion, then to make each the origin of art, the primordial ground of signification is also to mark, and reclaim the grave of signs and symbolic meaning. If we are creatures that carry the oceans of our evolutionary origin in our blood, McCarthy and Esser show us that we carry the cave of our human origins in our mutable, mortal flesh.