Watching the flat-bottomed barges in Berlin-based photographer Benedikt Partenheimer’s video loop ‘It’s Never Enough’ (2013), as they roll down the Huangpu River before slowly disappearing into the rosy mist, I grow sleepy. It’s the soft, pastel hues, and the slower-than-a-waltz tempo of the ambient music that accompanies the footage. They conspire to lull me into a dream state, bordering on complete somnolence. When I read the description of the piece, in which Partenheimer reveals that the rosy hues are the product not of artistic artifice but of man-made chemical particles—pollution, in other words—a sense of unease arouses me from my slumber. This is the stuff of which not dreams but nightmares are made.

If ever there were a more apt metaphor for the state of our world today, of the unperceived dangers that lie ahead as we teeter on the edge of cooking our planet above 2 degrees higher than it can withstand, I cannot think of one. Collectively, we, the human inhabitants of this planet, have been gently rocked into a state of waking slumber, sleep-walking our way, through the mists of short-term gain at the cost of long-term life, into catastrophe. It’s this tension between beauty and the abyss that Partenheimer’s work captures in such moving and evocative ways, earning him the Berlin Art Prize last year for, in the jury’s words, “[his] humorous, thoughtful and sincere approach to visualizing climate change.” 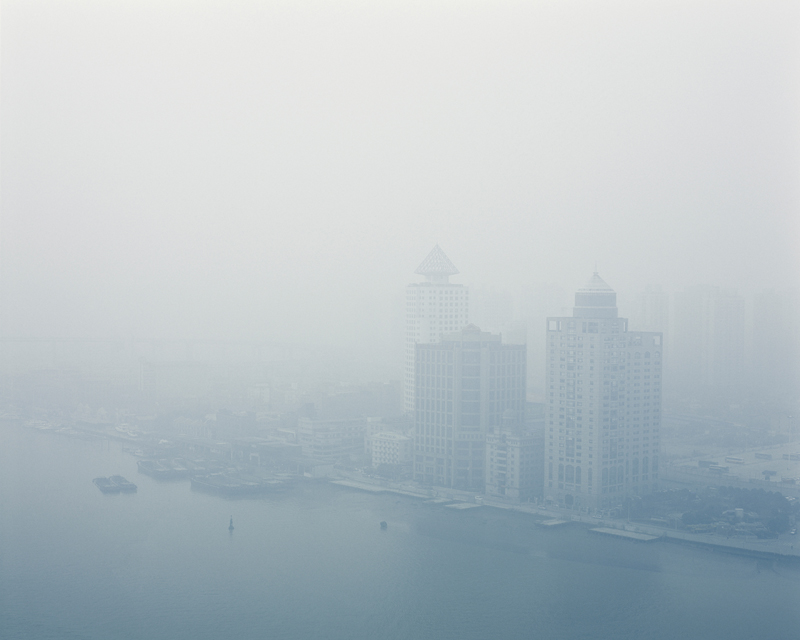 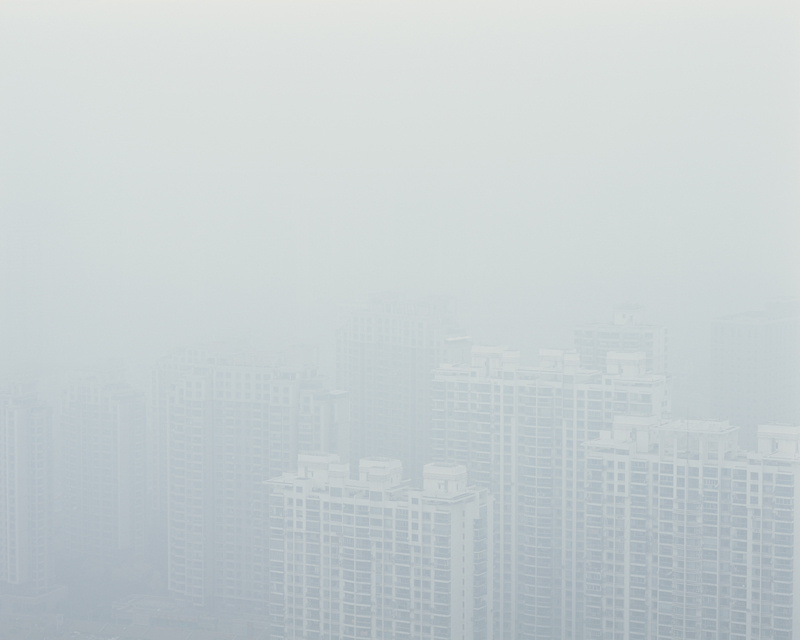 Michelle Standley: When did the issue of climate change first signal on your radar? And is air pollution an issue of particular concern to you? When did the theme become something that you wanted to address in your work?

Benedikt Partenheimer: Climate change has been on my radar for quite some time. But I think I became much more aware and conscious about it when it became part of mainstream media in the early 2000s. It became very obvious that there climate change is manmade and that we have to do something about it. For the first time in geological history humans are the major force shaping the physical, chemical and biological properties of the earth. Our actions determine where the planet is going. It’s a situation that should urge us to reconsider and readjust the way we have chosen to live.

Air pollution is just one aspect of how humans affect and destroy the environment. It’s a phenomenon I was interested in because of its environmental implications but also because of its aesthetic aspects. The series ‘Particulate Matter’ focuses on the relationship between revival and decline and reflects on the consequences that come along with excessive economic growth and the combustion of carbon-based fuels. Scientific studies have proven that many cities in China—but also other cities around the world—have become unsafe for human habitation. A recent report from the World Health Organization shows that air pollution kills 7 million people per year and is now the world’s largest single environmental health threat. 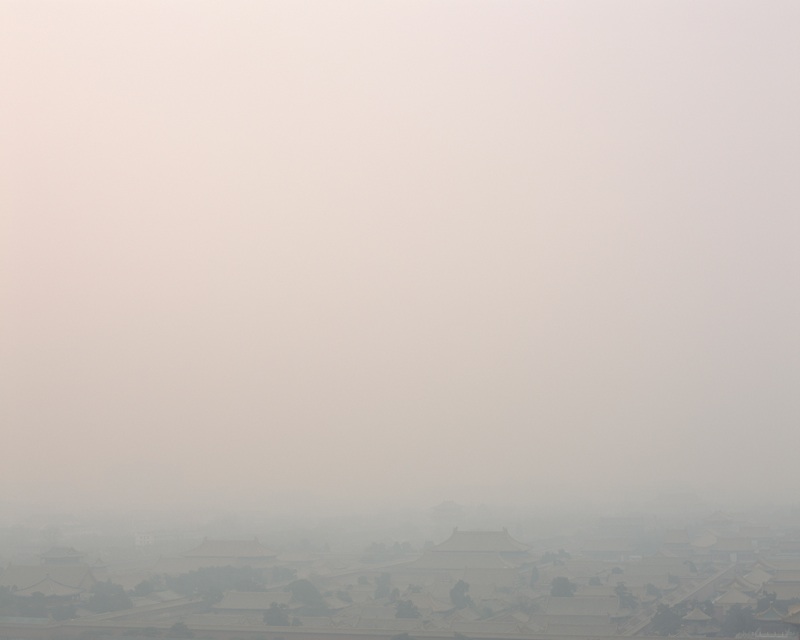 MS: When I first looked at your series ‘Particulate Matter’ (2013) and the video ‘It’s Never Enough’ (2013) immediate associations with the English and German romantics came to mind: here I am thinking of William Turner and Caspar David Friedrich. Their use of light and their relationship to landscape, which they viewed as a conduit to the spiritual and escape from the rapidly modernizing and industrializing world, were particularly apparent. Were these associations on your mind when you created the series? On a related note, there seems to be a tension in ‘Particulate Matter’ and ‘It’s Never Enough’ between the dreamy, romantic aesthetics and the dark material reality that they expose. Was this tension intentional?

BP: There certainly is a tension between the depicted harsh reality and the poetic aesthetics of the images. This implementation was a very conscious and conceptual decision. The Chinese government has for many years referred to air pollution as fog or haze and in this way deceived its population by romanticizing the problem. My work takes that into account. The seemingly deceptive romantic aesthetics of the images unsparingly disclose their true meaning by the titles of the respective images. The titles refer to the AQI (Air Quality Index), indicating the degree of air pollution.

Like you said, 19th century romantic painting was strongly influenced by the spiritual. The urge to understand the world was seen in the bond between nature and the divine. The landscapes depicted people’s desires and idealized emotions instead of the intellect. Turner and Monet were painting air pollution in London in the 19th century. They were using a technique developed by Leonardo Da Vinci called “sfumato”, which translates into “seen as if through smoke”. This technique creates soft transitions between shades and tones so that they melt into one another without perceptible transitions. When using photography in air pollution it seems as if one enters a soft mysterious world without shadows and this is probably why most of my photographs have a rather painterly touch. So, on a formal level there are aesthetic parallels between my work and the paintings of Turner and Monet, but conceptually they are very different. 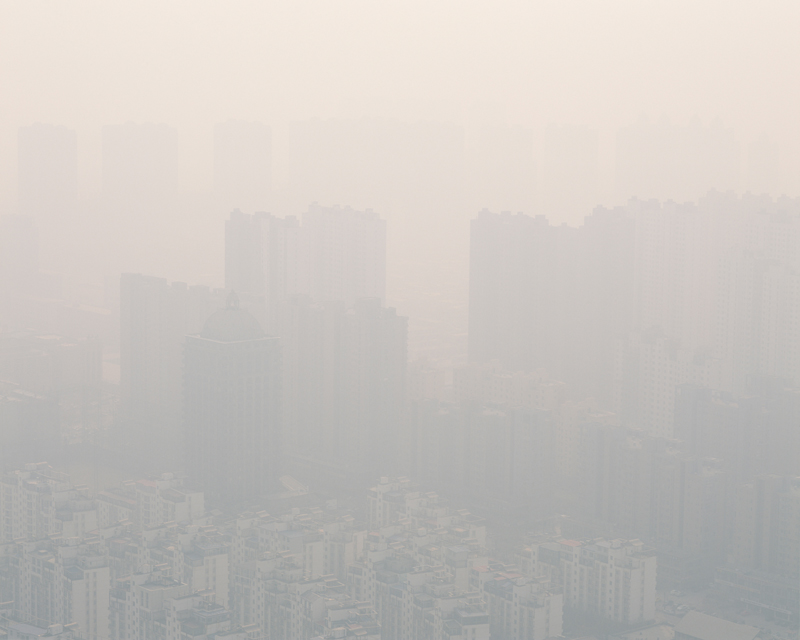 MS: Do you think that artists have a special part to play in addressing the issue of climate change? How do you avoid the charge that artists who seek to address political issues are acting more as pedagogues or teachers than as artists?

BP: I don’t have an audience in mind when I produce new work. For me the activity of making art is part of an empirical process of perception, it’s a critical and conscious interaction with the here and now and an attempt to understand the world. I don’t think of myself as a pedagogue or teacher and I am not sure if art can change the world or change our behaviour. But I strongly believe that art can be part of a process of change. Art gives us the opportunity to connect with others and ourselves and creates a situation for people to think and feel.

MS: You created the series just four years ago and yet in light of the election of Trump and the anti-globalization sentiment that has captured a good part of the world, that feels like a lifetime ago. In an unexpected twist, China is now assuming the mantle of leadership in curbing dependence on fossil fuels and in reducing CO2 and greenhouse gases. Do these shifts influence your thoughts about your work in relationship to climate change? Were you to return to this theme, do you think you would approach it differently now?

BP: These political shifts certainly influence the way I think about the present situation. In a recent work ‘Business as Usual’ I address aspects of post-factual politics and climate change denial. I collected about 14,000 A4 pages from the International Panel on Climate Change. Those pages provide scientific data and facts about climate change from the early nineties until now and I have been presenting them together with images from the ‘Particulate Matter’ series.

Luckily, the situation in China is changing. Hopefully the government will follow through and lead its country into a more sustainable and green future. People like Trump will maybe slow us down but he also shows us that we cannot solely rely on our so-called political leaders to work for the change we need. This should encourage us to make our own decisions. We have to become aware that we, the people, have a lot of power. We can vote, we demonstrate and we can boycott industries that produce and manufacture in non-sustainable ways. Consumers have a lot of power, and we have to become more conscious of the things we buy and who we support. As global warming becomes a defining issue in our lives, we must re-evaluate our relationship with nature and think about sustainable and future-oriented solutions.

MS: Do you worry about the hypocrisy of Europeans and artists from the wealthiest parts of the world wagging their fingers at other countries (like China and India) for their part in contributing to climate change? Should Europe perhaps bear a greater price or responsibility, considering that Europe not only wrought massive damage to the planet with their own activities but that they also established the destructive model of modernization that the rest of the world was then compelled to emulate? 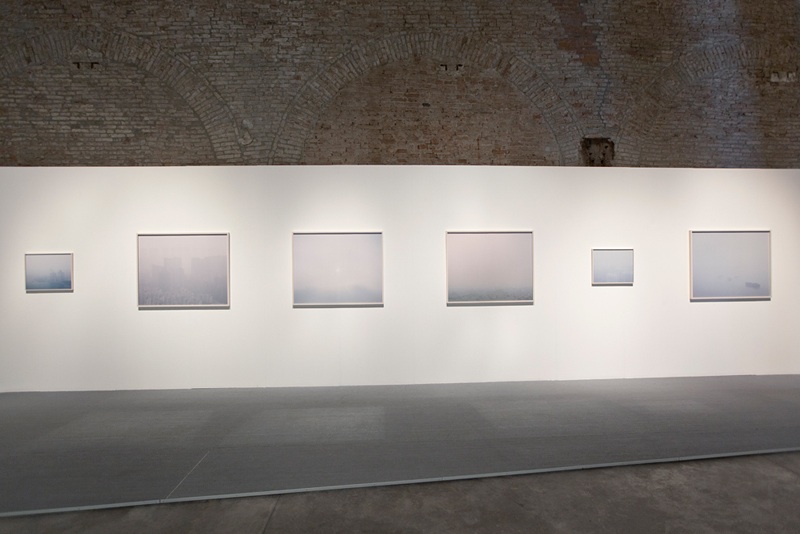 BP: The wagging and pointing of fingers at others has never and will never create or inspire change. Europe and other developed countries certainly have a great responsibility and should help and compensate underdeveloped countries. But sadly we live in an extremely profit-oriented world where the disparities between nations and people are still immense. I think we have to understand that we are in this together. We might need to evolve into new economic models and new ways of sharing this planet. We need a change of perspective and a holistic view of the world with less antagonism.