How do we conceive of identity? To what extent can we control our sense of personal heritage, and in what ways can we adequately represent it? Questions surrounding power and identity underlie ‘Born in the Purple,’ the current exhibition of work by Berlin-Istanbul-based artist Viron Erol Vert at Kunstraum Kreuzberg/Bethanien. Neither denying nor asserting the validity of identity, Vert treats his own character as a fluid, unfixed form. In doing so, he uses expressions of his memories and experiences to fuel his exploratory critique of power dynamics, constantly questioning who has the right to disseminate information about our personal histories.

Urban museums and institutions often control our perceptions of national heritage and Vert’s exhibition resembles a museum of his memories, in which his artworks comprise the artefacts. However, this body of work veers away from outright autobiography; the works on show do not appear to relate exclusively back to one person, rather a broad range of external phenomena comprising his sense of self. As would be expected from a solo exhibition, these references to tradition are reassembled in a highly personal manner. Yet the diversity of Vert’s choice of media, material and subject-matter seems to admit that forming a coherent image of one’s background is a task that cannot be achieved by a single individual, but is, rather, a collective mission. 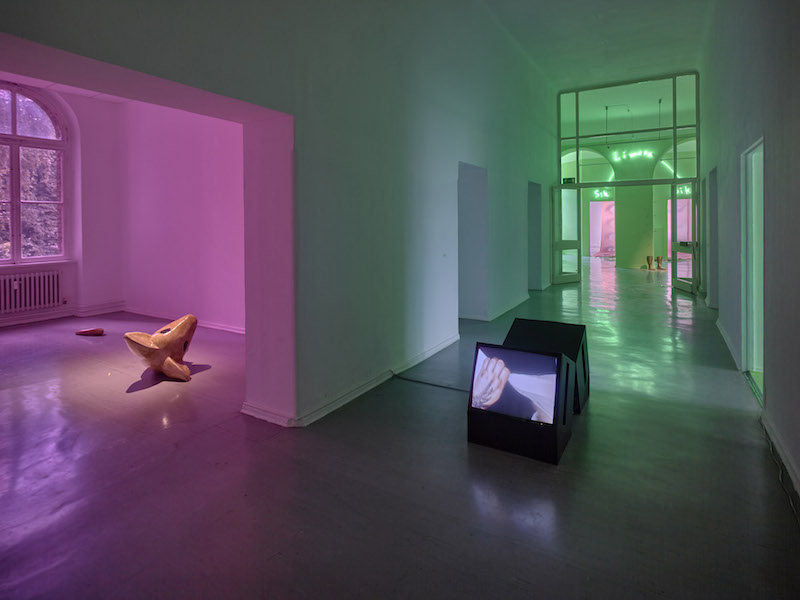 As such, Vert’s exhibition has the deceiving appearance of a group show. The disparate agglomeration of works fit neatly with Vert’s mission to communicate the complex nature of his personal background of Istanbulian family roots in Greek–orthodox, Arab, Levantine, Armenian and Sephardic cultures. Not only are these cultures treated as interlaced within his identity, but Vert invites viewers to engage with his lived experience, in both Istanbul and Berlin, by projecting their own histories onto the works. Vert has also created a newspaper to accompany the exhibition, which includes personal anecdotes and memories, and outlines their relevance to broader traditions attached to his various nationalities. This incorporation of a media form associated with propaganda and manipulated dispersal of information establishes a further question of power within the exhibition; whose authority is it to control how information is released? Political histories, mythologies and religious stories run as compounded threads throughout the twelve rooms in which his expansive body of work is installed.

The exhibited works pivot between art installations and mimicked forms of public and domestic space associated with Istanbul, so that moving between rooms makes you continuously unsure what content you will encounter next. The depth of information within the accompanying newspaper will inform visitors that the works are heavy in content, but Vert manages to diverge from simply explaining the contextual backdrop of his work. Encountering a room covered in carpets with a fountain spurting from an ‘Alla turca’ toilet initially suggests a humorous poke at Turkish culture. The title ‘Sorry but are you Turkish?’ imbues the work with a more serious tone. While the majority of the exhibition communicates as a celebration of possessing a multi-cultural background, this work is exemplary of how many of the works provoke a reflection on the weight of our desire to belong and the mental burden that invisible national borders can place upon us. The conflicted state of being multi-cultured is also touched upon within the work ‘An Armenian in the Kitchen, a Greek in the Bed.’ A large ceramic deer head lies on the floor, lit by green light while the rest of the room is flooded in a purple haze. The lost expression of the deer head alludes to Vert’s confusion about an expression used by his mother, whilst also commenting upon the isolation of never fully feeling integrated within a single culture. 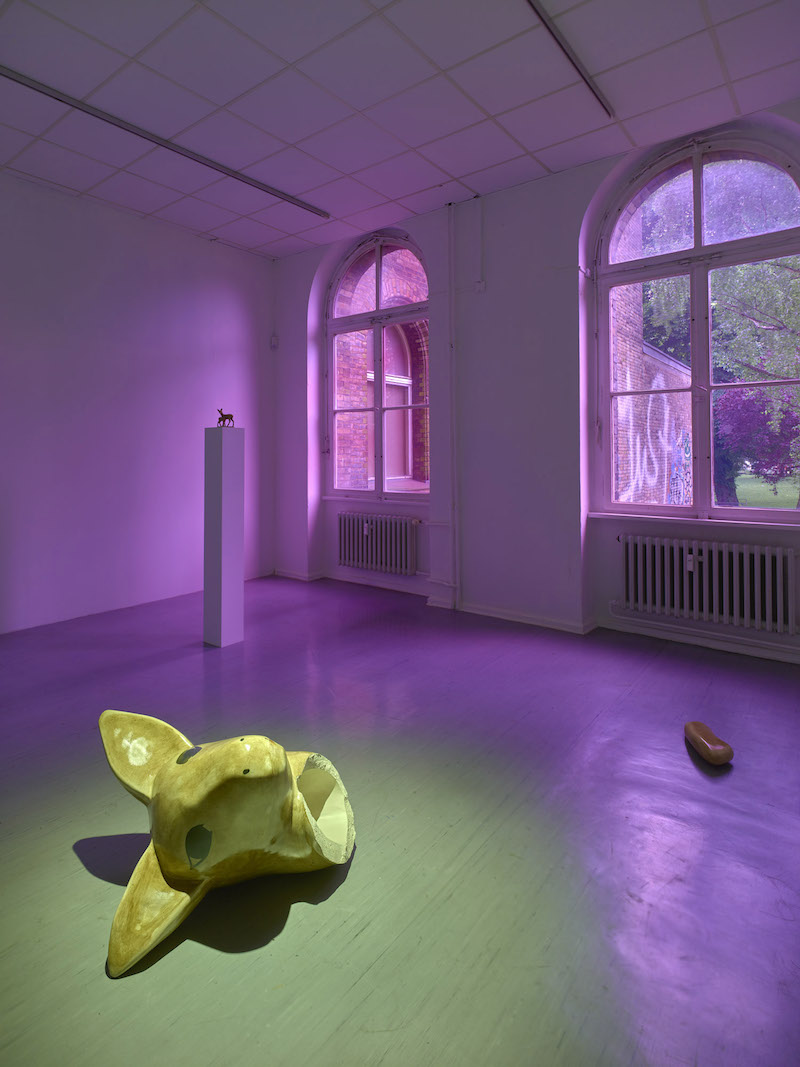 As part of the exhibition, Vert has set up the ‘Porphyra Club,’ a participatory work involving a programme of organised talks, discussions, live performances and music taking place. By requesting the presence of participants to activate the space—exchanging knowledge, thoughts, and sensuous moments—the project seems symbolic of Vert’s denouncement of his authority to speak, as an artist. The physical setting of the room itself is comprised of both a dialogical space and an art installation; it is carpeted with seating and lit with a green hue, with two delightfully kitsch chandeliers adorning the centre of the space. Chiming with the show’s basis in his family apartment in Istanbul-Osmanbey, the room is activated by its facilitation of domestic rituals and entertainment. Participants are treated as guests, with çay (Turkish tea) and piles of books on histories of Berlin and Istanbul stacked on shelves. Through merging leisure with pedagogy, the artist not only creates a space for us to simply absorb his rhetoric, but creates a framework in which conversational exchange can flourish. 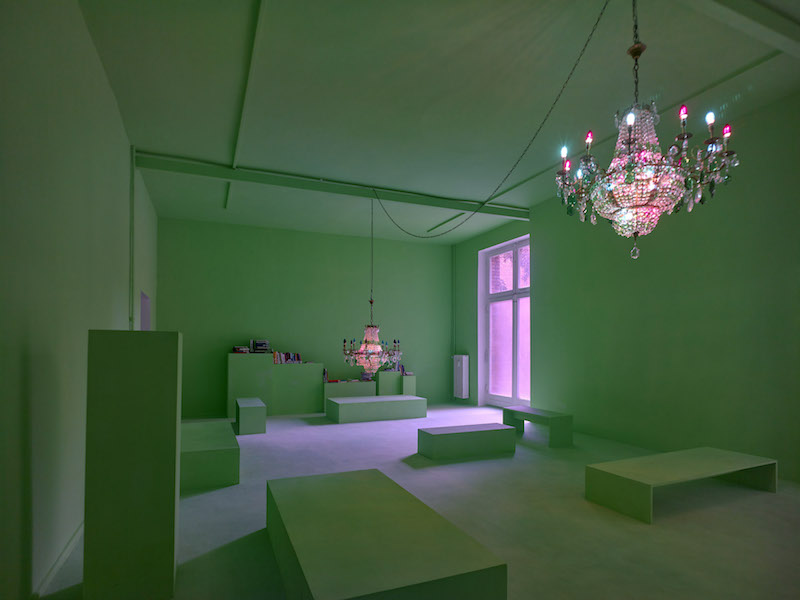 The presence of the ‘Porphyra Club’ amongst the other works suggests that Vert’s relationship to his viewers is not intended as a one-sided trajectory of communication: the artist does not wish you to simply observe but to actively participate and exchange histories. The space suggests that he permits us to respond to his work and add to his narrative with our own backgrounds. The composite nature of these inter-disciplinary works points to the complication of asking who has the right to relay history and what resources can adequately communicate its evolution. Approaching the telling of his personal story and its relation to his history, Vert declares that our attachment to a place cannot be reduced to an understanding through officially filtered information. Although individual subjective experience may form the basis of our tenuous sense of identity, Vert shows that personal history cannot be detached from the broader politics of identity and culture that transcend national borders.