“I was fascinated by the woman killing a man with her bare hands, no weapons or tools, I saw it, I think when I was 15 […] so I also killed it, I killed the tape with my hands and my feet”, Mika Taanila recounts the ruinous process he executed on ‘Faster, Pussycat Kill! Kill!’—Russ Meyer’s cult classic—to his audience at Salon Dahlmann last week. This delicately destructive approach to VHS film leads to the equivocal pieces in the series, ‘Black & White Movies’ (2013). The sculptural photograms of films from 1924-1995 have been performatively defaced via methods specific to each plot. Taanila guides us through this series, his dismantling and outright razing of other cultural relics: the shooting of bullet holes and slicing of scalpels through cinematic literature. These techniques are also used in Taanila’s series ‘Mirrored’, his work presented in the Nordic Pavillion at the 2017 Venice Biennale. The process of manipulation is integral to his oeuvre and has evolved with it. 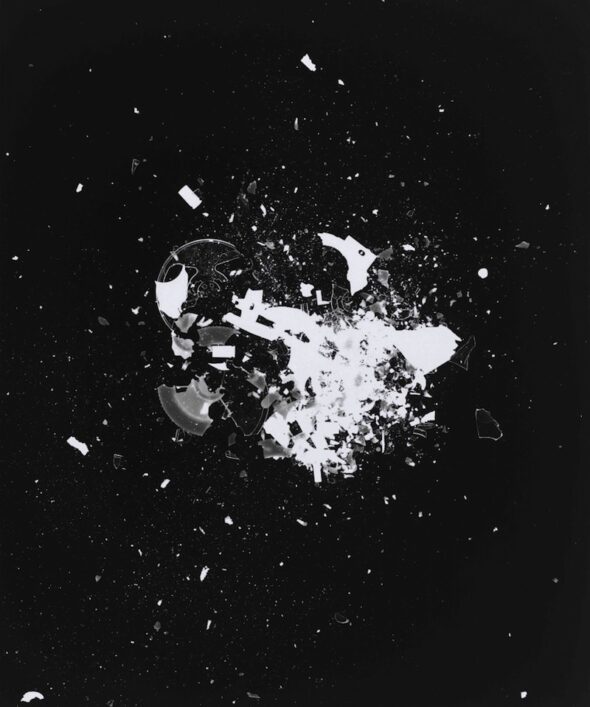 “But first and foremost he is a film director”, curator Olaf Möller establishes at the beginning of the pair’s discussion. Classically trained in cinema, the Finnish artist’s experience with film and sound has spanned decades. His proficiency and interest in cinematic history and film technologies, and his sizeable personal collection, has led to a graceful transition into the production of video art and installation. This has resulted in the skillful manipulation and layering of VHS with digital media. His current work ‘The Earth Who Fell To Man’, exhibited downstairs at Salon Dahlmann, is a video installation accompanied by copies of the book, ‘The Man Who Fell To Earth’, the sci-fi novel by Walter Tevis, where the protagonist on the cover of the novel has manually been cut out.

The installation is part of a cinematographic-thematic series and a direct continuation of the concept of Taanila’s 2013 film, ‘My Silence’. Both works are described as reductionist, for their experimentation with the removal of the core element of each film. In the case of ‘My Silence’, the dialogue was erased: the pronounced factor for which the film is recognized. In ‘The Earth Who Fell To Man’ Taanila also uses elimination, erasing the central narrative. He reverses the title and splices scenes from Nicolas Roeg‘s legendary film, ‘The Man Who Fell To Earth’ (1976) starring David Bowie, with other found footage, completely erasing any humans. The piece depicts the world, humanless, in disarray: buildings, landscapes, the sky and the American Flag are flipped upside down, reversed and seemingly falling upon the viewer. This coincides with a sound piece of earthquakes, falling rocks and landslides. As with my ‘My Silence’, the artist indicates the purpose of his experimentation: what would become of the piece without humans?

The discussion around Taanila’s films was informative as an introduction to the artist’s oeuvre and the process behind the ‘Black and White Movies’ series was compelling. The prints are aesthetically stunning and there is an element of abstraction that is easy to get lost in. The process of destruction employed by the artist, based on the narrative of each plot, intersects film, technology, performance, sculpture and photography with dexterity and inventiveness. The reductionist concept of erasing the central narrative—in the film ‘My Silence’, in particular—allowed us to gaze deeper at the more ephemeral aspects of the cinematography, such as light or familiar human gestures, rendered without words. 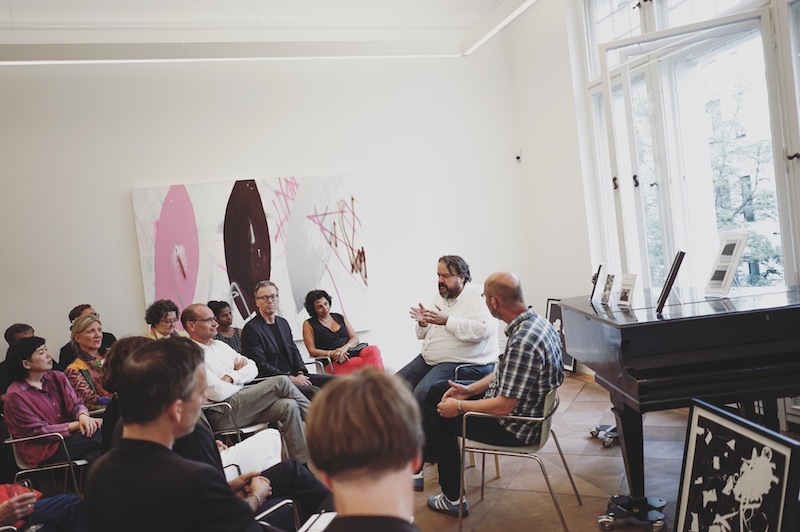 Unfortunately, the same strong conceptual element was less evident in the video installation ‘The Earth Who Fell to Man’. Beyond the reductionist concept of removing the human element, the video piece seemed quite void of meaning and visually banal, and wasn’t bolstered by anything further in its literature. As such, I was impatient for this piece to emerge in the artist talk. Interestingly, Taanila mentioned only briefly—towards the end of his reflections on this piece—how the concept of this work emerged from his contemplation of the future for our world, nature and mankind, in the midst of Brexit and Trump’s election. This added detail gave the piece a whole new reading for me: a crucial one, that lent more relevance to the work itself but was at risk of being lost in the final product. Perhaps the artist didn’t intend to make this message clearly discernible, but its earlier acknowledgement could have provoked some important social and political discussion.