Entanglements between minerals and the currents of capitalism form the subject matter of Australian artist Nicholas Mangan‘s carefully-researched survey exhibition ‘Limits to Growth’. Across the four bodies of installation and video work spanning KW‘s top floor and attic, the artist examines residues of his native Australia’s rarely-acknowledged role as a colonial administrator in the Pacific region, and the capitalist means by which this relationship is maintained. Such political injustices are embedded in the artist’s accountability to older, slower, mineral flows, via a number of succinct circuits the artist sets into motion. With the Pacific Islands set to play a pivotal role in November’s upcoming UN Climate Change Conference (to be hosted by Fiji in Bonn), such a grounded understanding of the intertwined nature of geological and human histories comes at a timely moment. 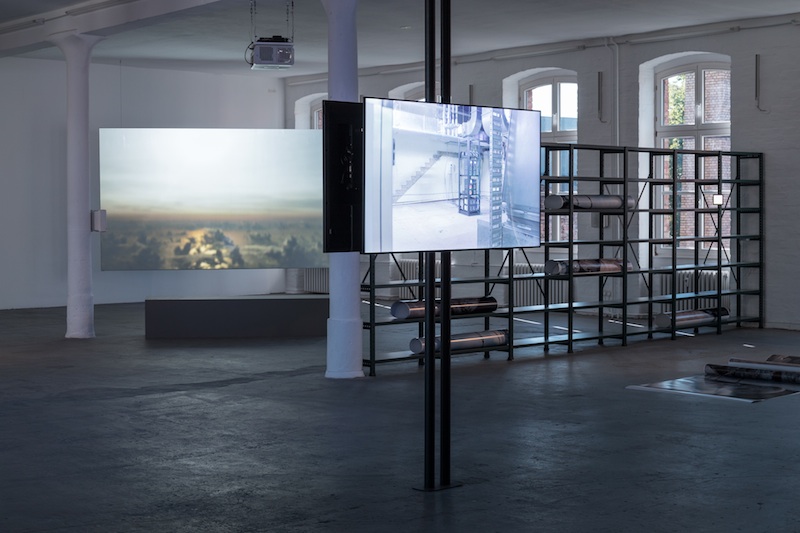 One such circuit explodes into action on the threshold of the exhibition space. An electricity generator can be glimpsed in KW’s stairwell, locked into a small room. Extraordinarily, the generator is fuelled by coconut oil. Extension cables loop upwards toward an installation in the darkened attic, where an immersive installation remounts an account of the 1989 armed uprising in Bougainville, Papua New Guinea, when the Bougainville Resistance Army rebelled against both Papua New Guinean occupation and the island’s Australian-owned copper mine, Conzinc Rio Tinto. When subsequent embargoes left the entire island bereft of food and fuel, locals subsisted from coconuts, and processed the drupe into biofuel for energy. Mangan’s 2013 installation re-stages a workshop for processing coconuts into biofuel: an array of husks, knifes, and equipment. The space resonates with the muffled sputter of the coconut-fuelled generator, which provides energy for the projection of fast-paced footage: rocks and coconuts are split, trees felled and an open-cut mine is exploded into being; a bulldozer chases a panicked man. Wads of cash; an armed insurrection powered by coconuts. The work’s title, ‘Progress in Action’, offers either an ironic reflection on modern-day extractivism, or a dark future demanding complete self-sufficiency. 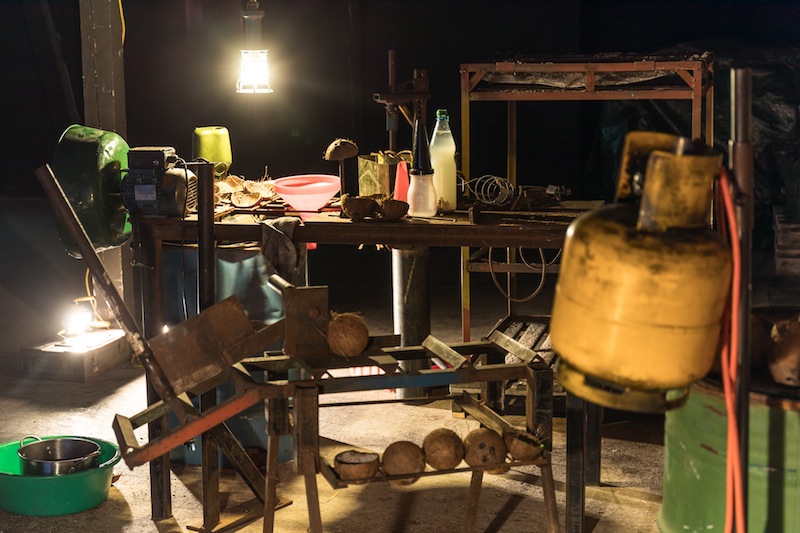 A large-scale video, ‘Nauru: Notes from a Cretaceous World’ (2010), offers an access point into three further bodies of work. The coastline of the island nation Nauru is shown, haunted by limestone jags formed over aeons from compressed coral. An airport tarmac glistens in the heat. Where rainforest once thrived inland, mangled machine parts encrust a lunar-like landscape, left over after first Germany, then Australia and finally Nauru itself strip-mined the island of its lucrative phosphate deposits. The camera switches modes, panning across an archival photograph of a white skyscraper, once the tallest building in Melbourne. This is ‘Nauru House’, built in 1977 with the island-state’s phosphate fortune. The building was sold in 2003 after Nauru’s empire imploded, as were the three decorative Nauruan limestone pinnacles adorning its terrace.

Mangan acquired, sliced, and polished one such pinnacle, creating ‘Dowiyogo’s Ancient Coral Coffee Table’ (2010). The work is a nod to Nauru’s former president, Bernard Dowiyogo, who toyed with transforming Nauru’s remaining limestone into luxury coffee tables for the U.S. market in the early 2000s. The above-mentioned video describes how Nauru’s economy soon experienced an unrelated recovery, albeit at great humanitarian cost: as aid from the Australian government began to flow into state coffers, Nauru transformed itself into a harsh island-prison for people seeking asylum on Australian shores. The off-white, striated surface of ‘Dowiyogo’s Ancient Coral Coffee Table’ shows aeons of compressed coral, but nothing of human mismanagement and suffering that caused its exposure. And yet the two things cannot be separated. 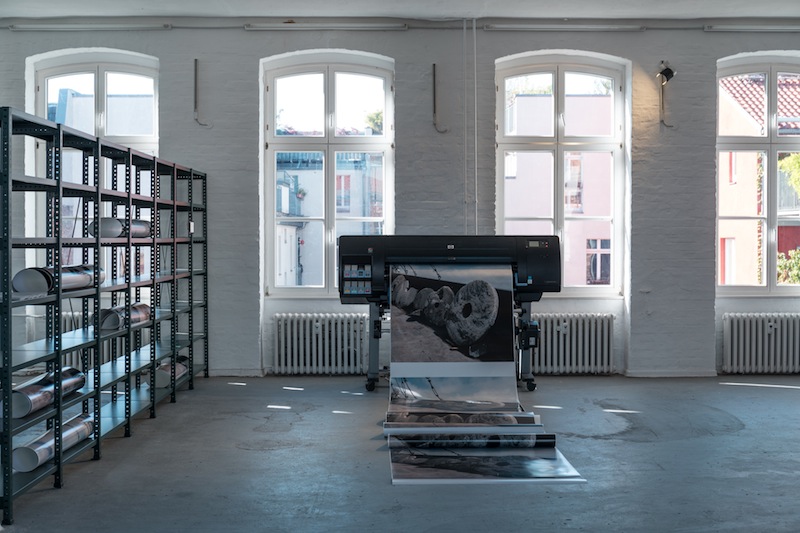 The charged relationship between meaning and material is further investigated in ‘Limits to Growth’ (2016), in which Mangan orchestrates an exchange of value between modern-day ‘bitcoin’ and images of the traditional currency of Yap, called ‘Rai’. The Rai – hand-carved, massive stone ‘coin’ attributed with value equivalent to the significant labour required for their material transport and production – was eventually inflated into worthlessness after Irish-American seafarer David O’Keefe intervened in the island’s economy in the 1870s, running a racket to improve the efficiency of Rai production. Like Rai, bitcoin are also ‘minted’ through an energy-intensive process, albeit by algorithm-solving computers. Mangan has set up an offshore bitcoin mining rig in the basement of Melbourne’s Monash University Museum of Art. Calibrated to match the rate of bitcoin produced, an inkjet plotter in the KW exhibition incrementally prints full-colour images of Rai coin at the rate of around one image per day, producing a massive ream. Factor in the cost of energy in Australia, however, and bitcoin produced there becomes virtually worthless (and carbon-intensive). The installation seems to suggest that material carriers of value are liable to be emptied out, at which point their value is shifted to new carriers: money as eternally deferred debt.

So what are the limits to growth? An answer may be offered by an underwater film, shot by the artist, of a submerged Rai stone between Yap and Palau. This video is pitted against depersonalised CCTV footage of the ‘offshore’ bitcoin mine, the hum of computers merging with Mangan’s heavy underwater breathing. This forges an uncomfortable parallel between human and computer labour, predicting a post-human reality. ‘A World Undone’ (2012) seems to speculate further to these ends. Crushed zircon (a mineral formed 4,4 billion years ago) is captured free-falling through dark space in minute, perfect detail. Scale becomes irrelevant: the particles could be dust mites, or stars. The eye of a camera capable of capturing movement at 2,500 frames per second replaces embodied experience: comforting, or terrifying?

Human and natural systems are inextricably intertwined, but navigating smoothly between scales generates an illusion of effortlessness not unlike zircon in free-fall. Yet as an entirety, Mangan’s survey exhibition seems to offer a reminder that the density of any given situation is always far in excess of the information at hand. And indeed, KW’s exhibition of Mangan’s work is itself part of the current ‘Australia Now’ campaign, which uses international events by Australian artists to promote trade ties even as human rights abuses perpetrated by the Australian government’s detention of refugees and asylum seekers on Manus Island, Papua New Guinea, and Nauru continue. It seems no circuit can ever be completely closed. But from the spaces and frictions in-between, new pathways may emerge. 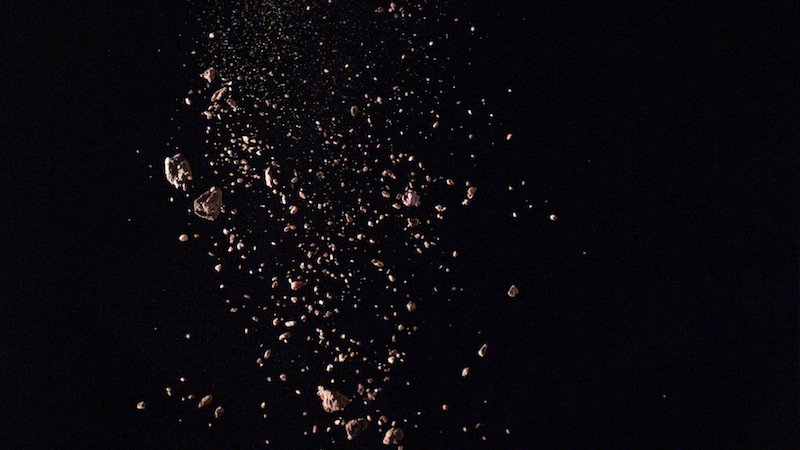