It is not only activists but also artists who are being called upon to represent viewpoints on climate change in their work; this artistic phenomenon champions environmental awareness on various levels, whether in its material construction or subject-matter. Within Nicole Dextras‘ work, both these features are inherent yet also undertake a further layer: confronting the contradictory nature of conversations surrounding the state of our planet. Climate change has increasingly gained traction as a visible danger, yet within a commercial gallery system often inclined to leap on the ‘eco-bandwagon’ (as Dextras terms it), climate change too often becomes a commodified spectacle rather than an actual impetus for adjusting our lifestyles.

Covering a range of media within her practice, Dextras confronts this dilemma head-on. She does so, not by telling us what to think, but by adopting the rhetoric itself and the very processes that it sets out to warn us against. In this sense, the temporality of her practice—creating large typographic ice sculptures or degradable eco-garments—provokes a counter-response to those who attempt to capitalise on our fear and guilt. Her work also often turns to mythological tales, particularly within her staged fashion photography. In this sense, Dextras’ work welds past, present and future together; she reconfigures established imagery, text and cultural narratives in order to advocate a forward-oriented approach to our planet. 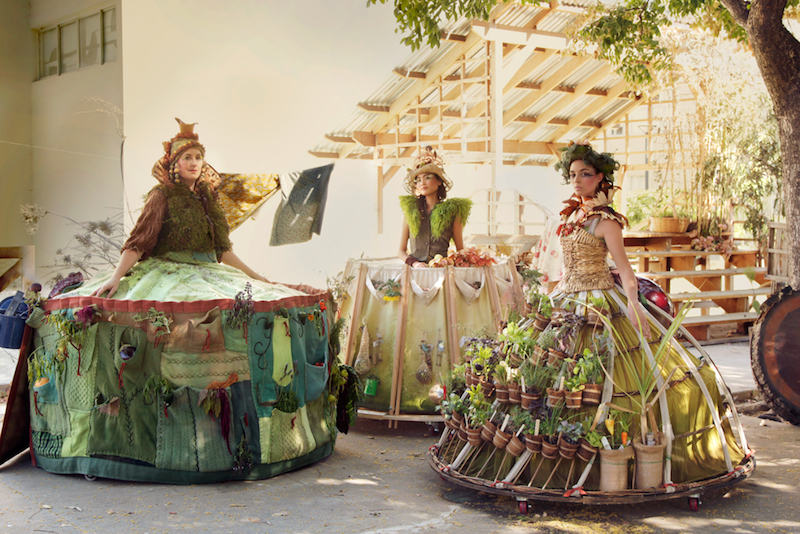 Katharine Doyle: The ephemerality of nature seems to be a defining factor in your work, which is apparent in how your garments are made from natural materials that will eventually decay. What message do you hope that these materials will communicate concerning human impact upon our planet?

Nicole Dextras: I use the ephemeral in my art practice as a reminder of our biological ties to the ecosystem of this planet. Being made from organic materials, my garments signify a mediation between nature and our intellect, reminding us that we, too, are cyclical in our nature. The evolution of our large collective brain has allowed us to dominate nature and to use it for our own purposes; now, after hundreds of years of rampant exploitation, we have come full circle to face the impact of our carelessness. The question that I hope to ask is this: how do we transition from a resource extraction economy towards a sustainable coexistence with our eco-system? This question must be confronted if we are able to make a change towards consuming less of our natural resources. The limitations of our usual tactics of fear and guilt to change people’s behaviour, while others profit from green-washing, is becoming increasingly unpalatable. Humans have long looked to the natural world for guidance, but my interest in the ephemeral lies in the reconciliation of our daily lives and the fragile equilibrium of our planet. 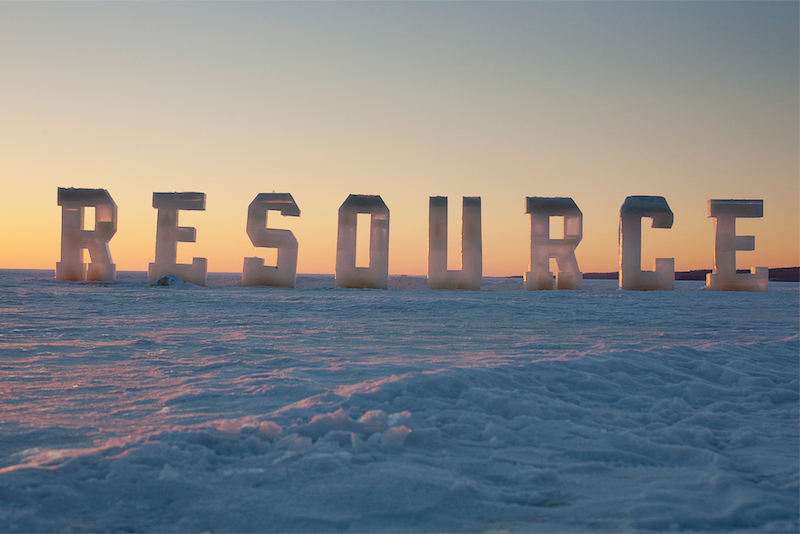 KD: You’ve created a series of work involving huge, typographic sculptures constructed from degradable materials. These installations are confrontational interventions in public space that directly address our impact on the Earth. How does environmental activism play into this series of works?

ND: I am interested in a soft approach to environmental activism, which is why I chose to communicate through art instead of placards. For me, these texts are evocative of the heralding of the new Anthropocene epoch, which alerts us to the impact of humans on the environment. We are so drawn into the daily drama of tweets and unconfirmed truths that we risk tuning out the voices of those presenting viable and sustainable solutions to our climate crisis. Within my work I attempt to blur this dividing barrage of rhetoric that separates the climate change believers from deniers.

In this body of work, I chose words that are part of the environmental lexicon, and placed them in their own landscape. The words are intended to take on various meanings as they metamorphose from one state to another. For example, ‘Resource’ evokes a celebration of the natural world through being made of ice and standing brightly in the sun. Yet, unprecedented weather fluctuations generally determine the life of these works; this caused another work ‘Legacy’ to deteriorate within minutes. So, ironically, the principal hazard to my continuing with this series has been the warming of the planet; the ice melting is not only a poetic gesture but also communicates an indisputable fact. 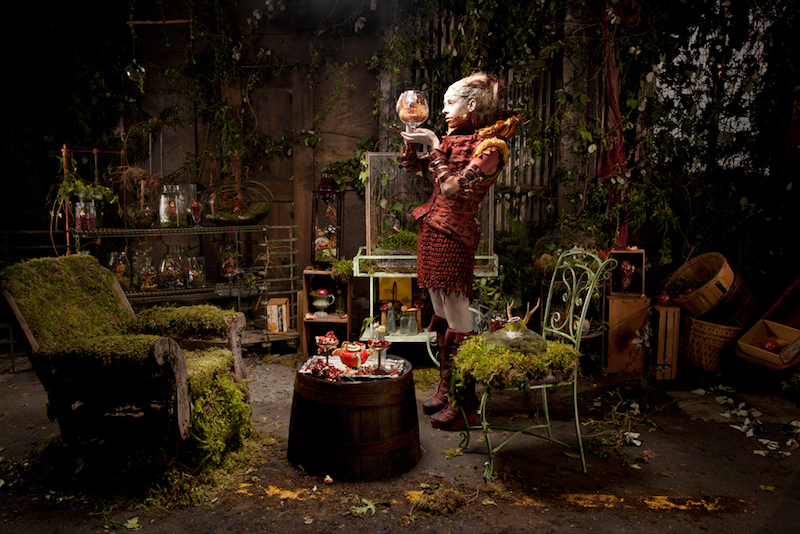 KD: Your photography often involves a retelling of ancient myths. Can you explain why adopting storytelling is important to your work?

ND: I use storytelling because I regard it as a universal tool for learning how to interpret and navigate the world. My particular interest in mythology lies in its ability to weave stories together that present the world as a complex web; these seem a more sufficient reflection of our lives and our eco-system. We may prefer nice linear narratives with pat solutions, but our reality, especially in light of our environmental issues, is much messier. With its rich set of archetypal characters, mythology provides a fertile platform from which to launch alternative reinterpretations of the standard reductionist view, which tends to polarise and assign blame. I want to go beyond fear and guilt and instead re-animate these age-old stories with contemporary protagonists who cultivate pro-active solutions.

One of my recent projects involves a retelling of the Greek tale of Persephone, in which the rape and abduction of the young goddess leads to the earth being barren and forsaken. Like many tales of this type, the woman is to blame for the fall of mankind due to her weakness for a forbidden fruit. In my interpretation, Persephone eats the pomegranate not as punishment, but instead for its healing properties, which help her to survive. She lives in a dystopian world ravaged by forest fires. The rescue/salvation scenario of the original story is irrelevant, because her tale is one of adapting to nature and surviving within its chaotic wreckage, which holds an important message for us. This human trait of resilience to adversity has recurrently proven itself in many disaster situations but for some reason we don’t know how to trust it. 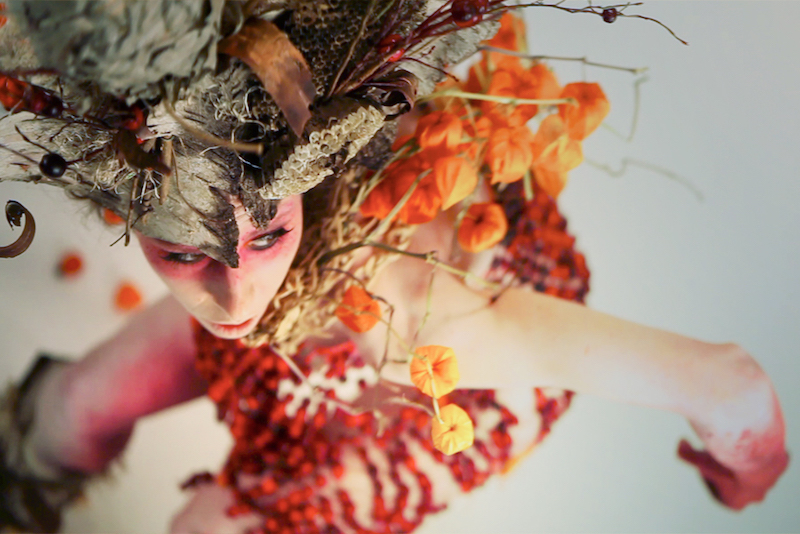 Nicole Dextras, ‘The Cranberry Beaded Mini,’ 2015. Part of the ‘Weedrobes’ series; the outfit consist of a beaded dress made with fresh cranberries, boots made from Birch bark and a headdress containing a wasps nest. // Image © Nicole Dextras 2015

KD: Why do you think that combining art and clothing could serve as a commentary on our relationship to our environment?

ND: The utmost connection of my eco-garments to the environment is that by wearing clothing made from ephemeral materials next to our skin we acknowledge our position in the ecosystem. I began this series by experimenting with techniques and organic materials that would create a garment sturdy enough to be worn and also completely compostable. The first tagline to the ‘Weedrobes’ series was: ‘Wear it and compost it.’ It took several years to master this and from there I began to develop the characters and the backstory behind each outfit. I have a secret fondness for the history of costumes depicted in futuristic films from all genres. From B-movie space vixens to the austere military lines of the “science is our saviour” school of thought, I think they assist in exposing our cultural projections as well as attitudes towards the environment.

In addition to this, I also find my work often contains references to the fast fashion industry and the ecological effects of disposable consumer goods. For example, I have created characters that interact with shoppers in fashion districts by asking where their clothes come from. The garments for Laurel Suffragette and Lady Calla were conceived specifically as performative interventions, where the performers had to improvise in conveying their character. This type of street intervention is inspired by the many grassroots movements that have been the springboard for change. It is a slow and complicated process, but it is in my mind the only authentic way forward towards sustainability.