“Words are very unnecessary, they can only do harm.” The powerful delivery of Depeche Mode‘s lyrics manifest in the form of a communal a capella song, emitted by a sizeable huddle of human bodies in the corner of Neuer Berliner Kunstverein (n.b.k.). Although it is only a momentary segment in Alexandra Pirici‘s solo exhibition ‘Aggregate,’ this statement does in fact seem to run as a thread throughout the work. Composed of over eighty performers, the work is premised on an intersection between the ritualistic repetitions in performance art, participation and choreographed dance. The work centres around a motivation to tap into our collective memory; Pirici treats the gallery space as a nexus for a globalised world. Barriers are deconstructed so that fluid movement throughout the gallery is enabled. While the experience of this exhilarating endeavour takes place within a staged time-capsule, the nature of its execution feels organic from the outset. 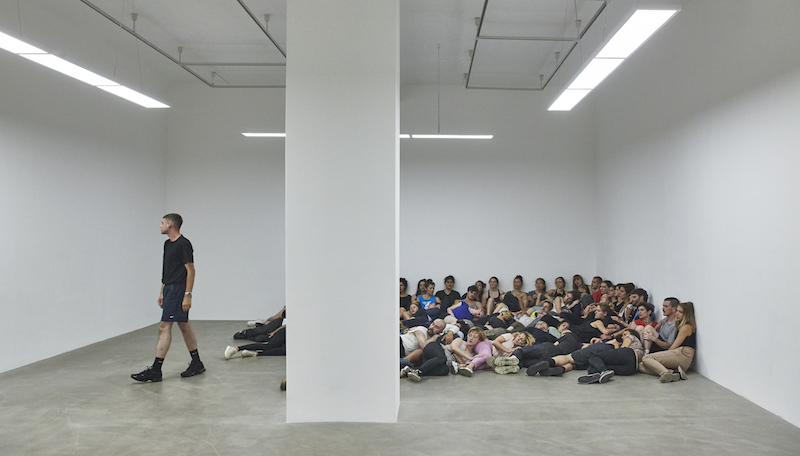 Spanning two to four hours at a time, Pirici’s performances of ‘Aggregate’ intend to transform n.b.k. into a living environment. Attempting to express something as intangible as collective memory and shared knowledge, the performing ‘aggregates’ act as an embodiment of a kind of bio-fiction. We can attempt to understand our experience of the world through scientific procedures, or perhaps candid visualisations of the human condition. But this is never fully the truth, and Pirici’s work not only seems to acknowledge this impossibility, but also uses it to channel a mixture of recognisable and ambiguous motifs to express the fragmented state of our held knowledge. In ‘Aggregate,’ this knowledges comes about in pieces, as various motifs collectively expressed by the performers, both physically and audibly. Some motif-actions are instantly recognizable while others are more open to interpretation; they include Michelangelo‘s ‘David,’ the Skype login sound, and embodiments of various animals and plants. Sometimes these motifs contain humour, and the audience timidly allows itself to laugh. But the faces of the performers remain neither neutral nor animated; a concentrated emotion is inherent in their gestures and their projected voices. This creation of a figuration of collective memory gains the possibility of a more tangible outcome, and it is all the more satisfying to be a participant in this mission.

The outcome of the piece initially seems pre-decided by the performers, but it gradually becomes apparent that a more democratic social interaction is underway. Ultimately the piece depends upon the co-habitation of performers and visitors within this space; decisions of how the work progresses are a collaborative procedure. Despite our dependence on the performers, the performers equally depend upon our presence as an audience, and the fluctuation between inclusion and exclusion means that attendees are instantly enlisted as key players into a complex negotiation of how the space is occupied. The presence of so many performing bodies across the space pushes visitors to the sides, confining us to the periphery of the piece. Yet, not long after, the performers disperse from their larger formations to stand among us, and instantly we are carried back into the performance. The attention to smaller details, such as the rejection of costume in favour of regular clothing, furthermore means that the dividing line between performer and audience is repeatedly manipulated and teased.

The sprawling layout of bodies in n.b.k. seemed to counteract the usual white cube gallery space, where hierarchical separation and distance is enforced for its visitors. Often in gallery settings, visitors are conditioned to stand at a respectful distance from the work, deeming us somewhat inferior to it. This institutional protocol has been visibly adopted by Pirici; the mere presence of performers and choreography pointed to the possession of a certain knowledge of the work’s trajectory. Consequently, the performers exuded authority. At the same time, there seemed to be a more complicated dynamic underway; in the same way our movements were dictated by the performers, they in turn responded to us and each other, and the orientation of the work constantly evolved.

Pirici’s background in dance was evident in the precision of movements executed by the performers. Yet the force of the work did not feel restricted to movement or physicality. The psychological effects of this co-habitation were not only determined by where you stood, but your enlistment under the gaze of the performers. The vitality of the live performance became largely generated by our own curiosity; I found myself wondering, ‘how does this experience translate for them?’ As an isolated circle of performers began intermittently calling out people’s names, a separate performer strode past me and fixed me with a knowing smile, as if amused by my evident confusion. Through doing so, she momentarily severed the barricade between us, the audience, and them. Within the performative arena, it is habitually easy to forget that performers have a conscience, that while we watch them, they are also watching us. Through her careful manipulation of protected white-cube boundaries, Pirici has successfully driven home that we cannot dissolve our collective memories into a single experience, even if it may consist of recognizable motifs, like a song excerpt from Rihanna‘s ‘Kiss It Better’.