A few hours after our official studio visit, I returned to Sanderstraße. That’s the street in Neukölln where you will find artist and performer Juwelia Soraya’s studio space, Galerie St. St. I wanted to take some photographs and to do a little observation of the neighborhood. Pricey boutiques and pubs with menus in English and German aimed at expats and tourists; card-playing and gambling rooms aimed at local Turkish-German men; second-hand stores, some curated, some decrepit; a puppet theater; and a laser-hair removal studio compete for attention from passerbys and mounted security cameras. Traces of the old Berlin slowly disappearing in the face of the new. 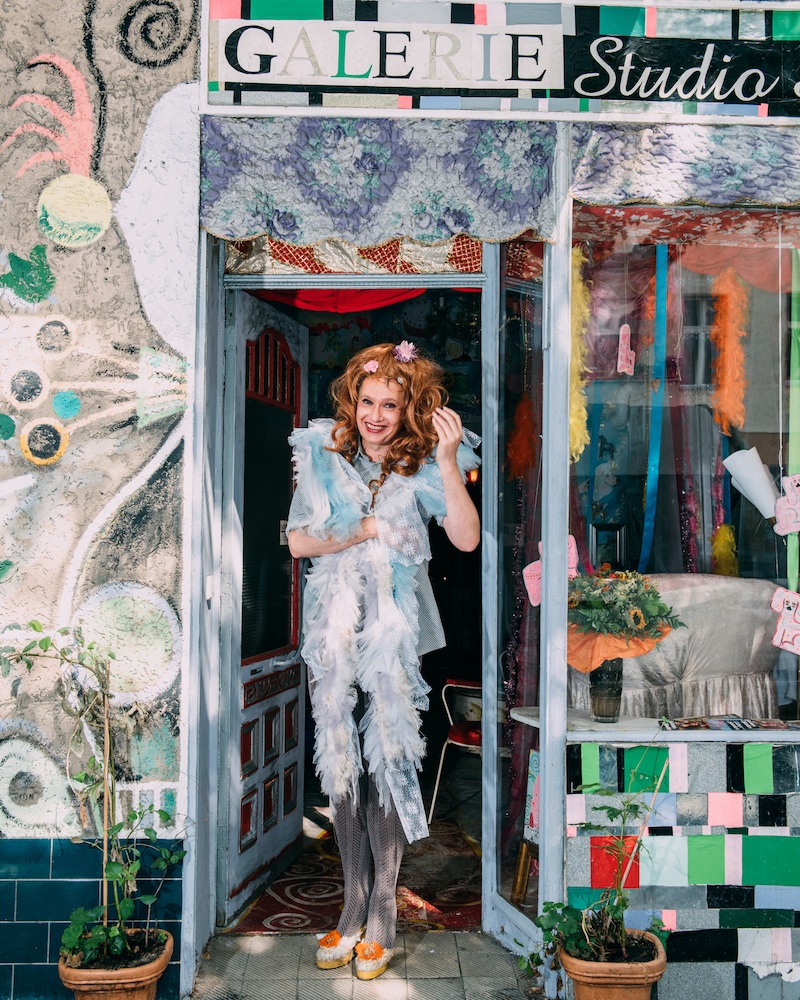 At the end of my stroll, I decided to snap a few pictures of Galerie St. St.’s garishly painted and decorated shop front, when out popped Juwelia herself, in a somewhat matted red wig that brushed the top of her broad shoulders and a blue lace negligé that brushed the top of her long thighs. Both the wig and negligé had perhaps seen better days but never a more spritely or playful wearer.

“I just put some pompoms on my dress, cherie,” Juwelia said with a coquettish grin, pointing to a smattering of red, orange, green, and yellow puffy balls that ran up and down her negligé. “Shall we put some on your bag?! Come on inside. Let’s do it.” Instead of decorating my bag, though, a few minutes later she was giving me a tour of the street (“Oh, they just moved in. I don’t even know what they sell. They won’t last another month.” Or “Oh, I could never shop there. It’s too expensive! Too much all together.” Or “All of the old residents are either dead or dying.”) Standing out front, we swapped stories about the tide of gentrification that has swept over our respective cities, New York and Berlin, in the past decade or so. 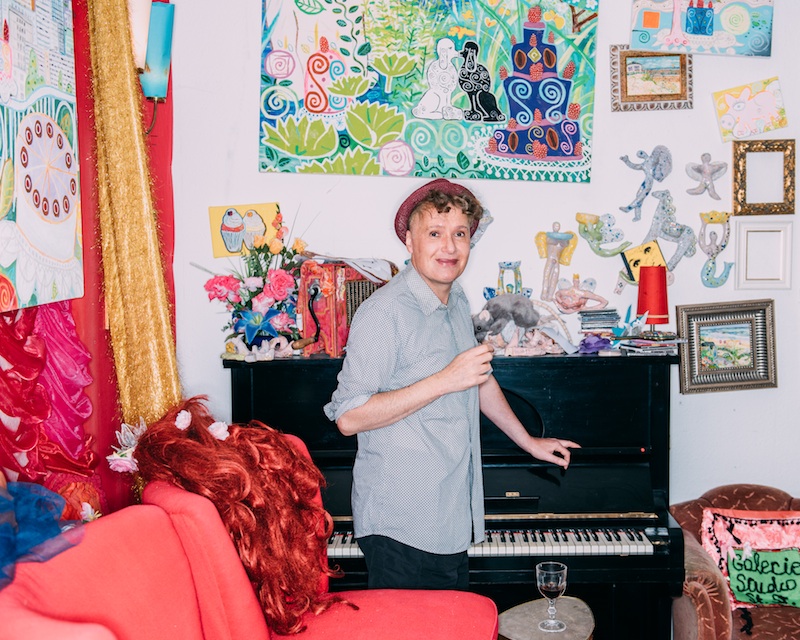 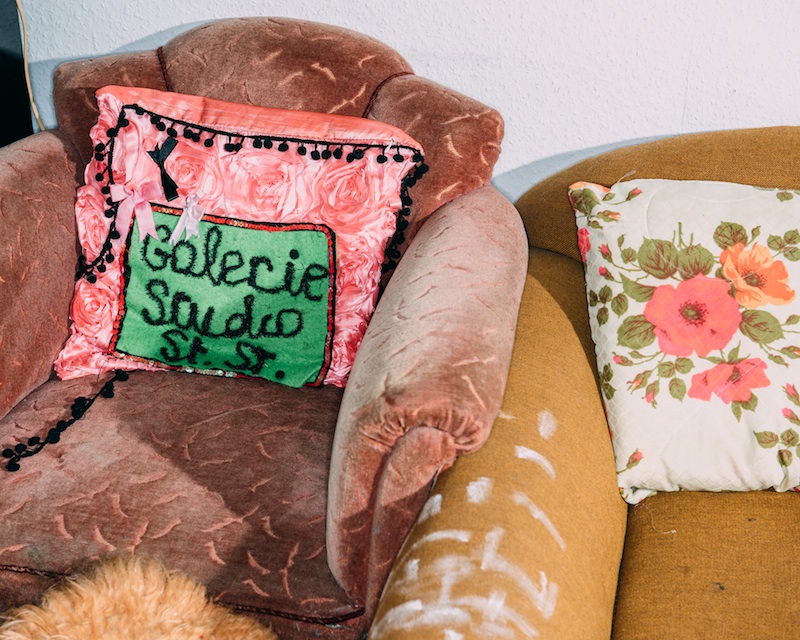 Earlier that morning, Juwelia looked quite a bit different, sans wig or dress, she greeted me in a short-sleeved button up shirt, straw fedora, sneakers, and tastefully minimalist make up. Though her appearance might have been more ordinary, more masculine in details perhaps, her manner was consistent with the one she maintains during her performances as well: charming, personable, and endearingly confessional. After chatting for a few minutes she jumped up to offer some water and a rum-and-cola drink from a can, but served in champagne glasses, something she also does during her cabaret shows, which have been taking place in Galerie St. St. every Friday and Saturday night since she opened it back in 2006.

Sitting side-by-side on a slightly sagging but very comfortable, velvet-upholstered sofa, we sipped our drinks and chatted about her childhood, what brought her to Berlin, and about how in her life and in her work she has always eluded labels and categorization, a form of play that goes beyond the surface level to undermine simple binaries and rules of convention. 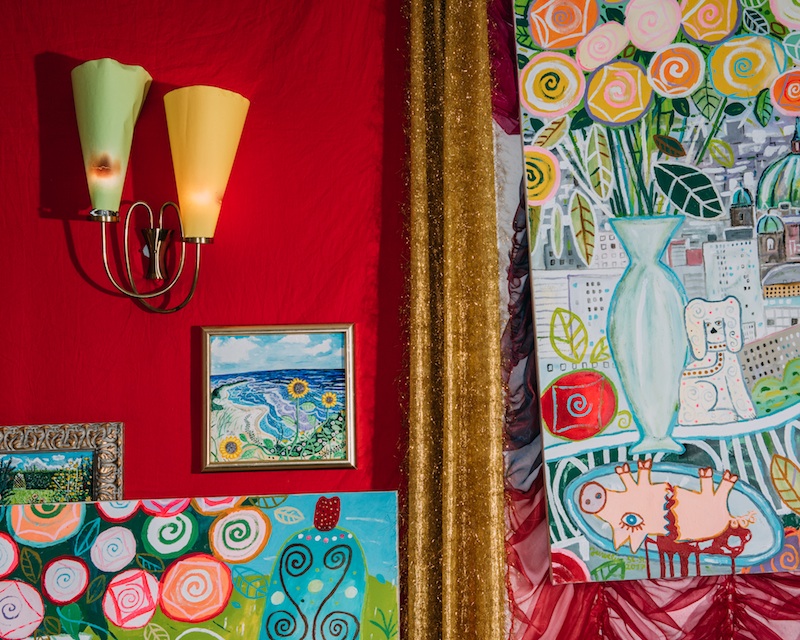 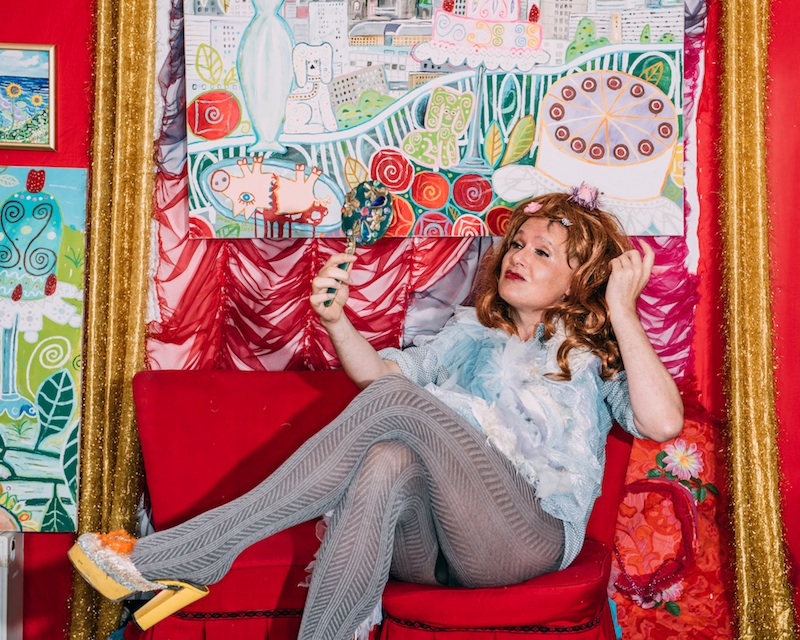 Nearly every corner of Galerie St. St. bears witness to Juwelia’s singular voice and vision of the world as an enchanted playground bedecked with roses, poodles, cakes, and ageless, long-legged lounge singers with flowing locks that bear a striking resemblance to Juwelia herself. These leitmotifs populate the paintings, sculptures and ceramics that line the walls and are echoed in the décor: mid-century, second-hand satin and velvet chaise lounges and overstuffed chairs; peach, purple, and blue ruched satin curtains, interspersed with gold tassels, feather boas, and garland; walls painted blood red or ocean blue; and floors covered with swirling, gold curly-cues. The slightly trashy but nonetheless cozy atmosphere, suggests a bordello. The small stage and piano in the back room suggest an underground cabaret. Everything suggests a delight in the surface, and in the sensual and sexual.

But scratch the surface even slightly and you discover that behind every pastel rose and white-frosted cake or sentimental song about love and glamour lurks a world-weariness, if not darkness, that threatens to crash the garden party. Slaughtered pigs and butcher knives, swastikas and police spring up unexpectedly in the corners of her paintings of intimate bedroom scenes, sultry lounges, windswept beaches, and cocktail parties. Songs about orphaned baby rats and overwhelmed Berliners who cannot understand the English that now surrounds them pop up between sentimental torch songs and chansons from the 1920s to 1930s. 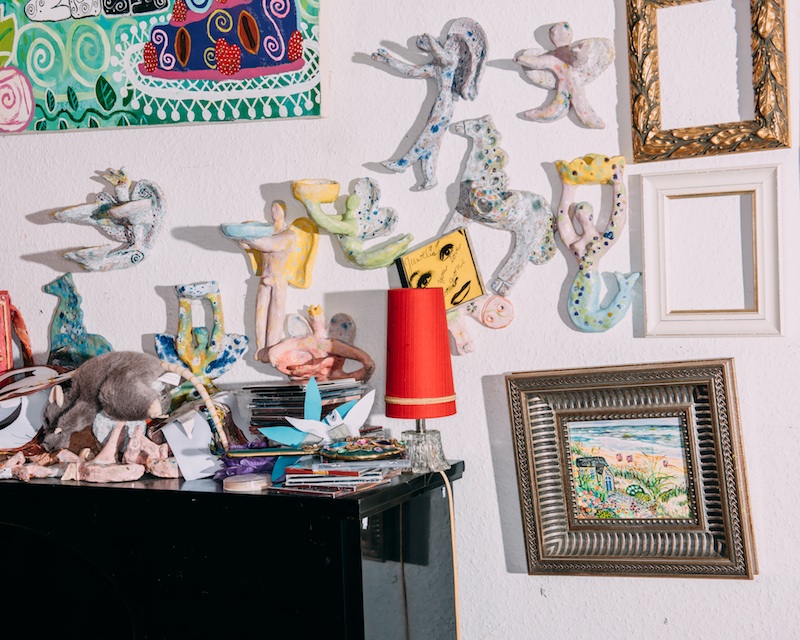 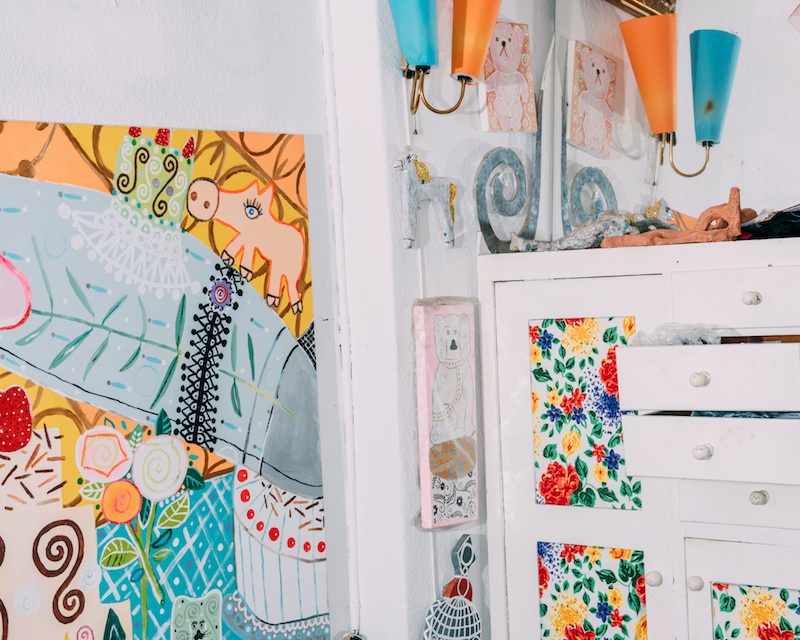 When I asked Juwelia about what inspired these references, she brushed them off with a wave of the hand, telling me she did not know. They simply came to her. But just a few minutes into our conversation, when we began to discuss her past, it became clearer that this shadow side has its origins in Kornbach, the small town in West Germany where Juwelia first saw the light of day. Born Stefan Stricker (the “St.” in “Galerie St. St.”) in 1963, Juwelia always resided somewhere outside the margins of the mainstream. She preferred painting ponies on her curtains or experimenting with her mother’s lipstick to engaging with her school work. Her behavior confounded her parents—more pragmatic and conventional types—who worked with numbers: her mother as in accountant for a private firm and her father in taxes for the government. But to please them, after high school she tried her hand at training in different professions: office administration, graphic design, and hairdressing. But nothing seemed to suit her. Her parents thought she was perhaps mentally ill and when she was 22 years-old, they decided to send her to a psychiatric hospital to undergo evaluation and treatment. Juwelia had other plans. Instead of boarding the train for the hospital, she boarded one headed for West Berlin.

That was 1985, back when West Berlin, an island in the middle of East Germany, was a sort of “wild west,” and refuge for anarchists and outcasts, who were fleeing if not the military service than certainly the strictures of postwar West German society. Juwelia found a welcoming home in West Berlin, where people like her could not merely escape the world but reinvent it. And that’s precisely what she has been doing for nearly three decades, recreating the world one canvas and one song at a time, from within the protective walls of her imagination and from within the enclave now referred to as “Kreuz-Kölln.” 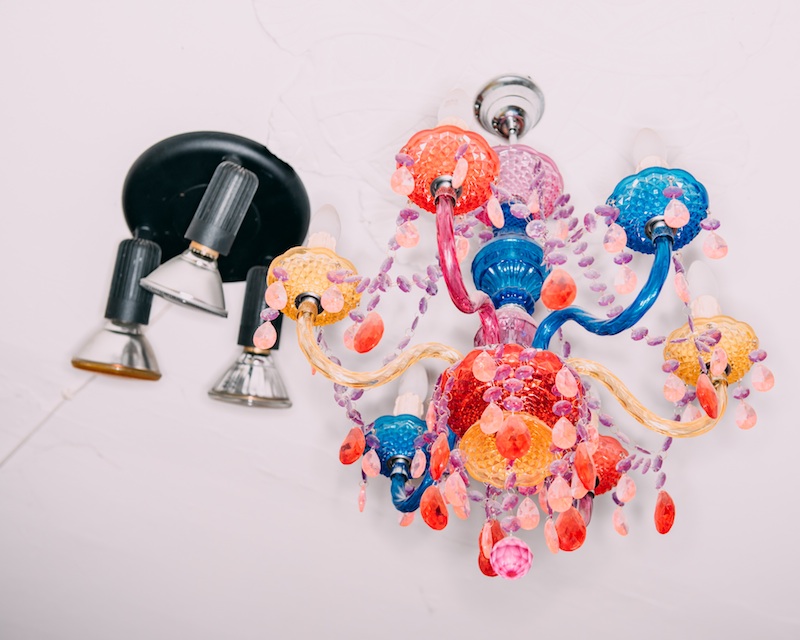 Apart from a stint as a sort of singer/stripper at a lounge outside Las Vegas, Kreuz-Kölln is the space Juwelia has inhabited since arriving. Early on she found an apartment, a future romantic partner, and a niche, as a “transvestite” singer and dancer, performing in obscure venues and abandoned apartments. When she was not singing or dancing, or busy sewing her own ensembles, she was also painting, on a large-scale, on canvases in her apartment. At some point, however, she switched to mostly smaller and medium-scale works, using acrylic on paper, which she then mounted on cardboard, and finished with a coat of lacquer, giving them a slightly pearly sheen. She also experimented with painting on wood, which she cut in shapes to suit her subject, and up until a few years ago she created small-scale works in clay as well.

If Juwelia still inhabits the same world, what has changed of late is that the world outside has come to Juwelia. In the past two years she has had a show at Jack Hanley Gallery on the Lower East Side in New York; a catalogue of her work, ‘Paintings’, published by Peradam; and now a forthcoming documentary in which she features prominently, ‘Überleben in Neukölln’ directed by Rosa von Praunheim. 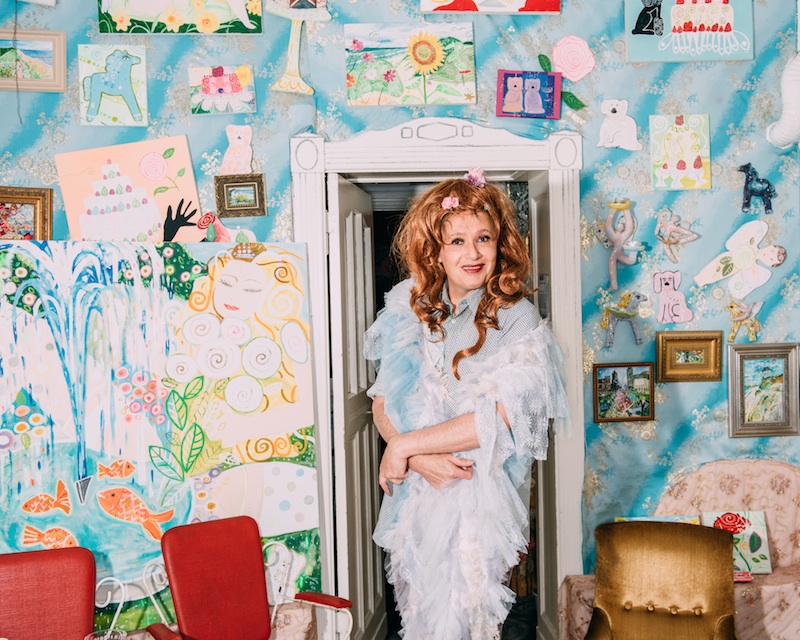 Yet darkness sometimes has a way of rearing its head in even the sunniest of climes. Amidst these moments of recognition, Juwelia has also had to grapple with her mother’s recent suicide, the death of a close friend; an inheritance dispute with her sister; and with a recent rent increase on her studio. Looking at her recent works—almost all of which feature a figure in repose in a natural setting, amidst a garden or beside a lake or tree-lined path—one sees that for Juwelia painting is not merely a catharsis but also a sort of safe haven, a retreat into another world: a safer, more beautiful, more magical place, one untouched by the pains of change and uncertainty.

Before hopping back on my bicycle, I took one last photo of Sanderstraße, a shot of a flyer crumpled on the sidewalk demanding laws for better rent controls. As I turned the corner back onto the bustling Hermanstraße, I whispered a silent prayer for the soul of Berlin: “Long live Galerie St. St. Long live Juwelia Soraya. May both go on forever.”